Parents love to brag about their children.

I have no idea why this is so ingrained in so many people. Many parents just love to brag to other parents and even end up making stuff up just so they can one-up other people. While the kids are left with unnecessary competition between each other that shouldn’t be there in the first place.

However, this can become even more problematic when your child has specifically asked you not to do so or you have signed an NDA. The latter one being even dumber since they can take legal action against you. You might be confused about what I am talking about. Well, you will understand once you read the whole story.

It might sound paranoid but some people need this sort of protection so crazy fans don’t fin their children. 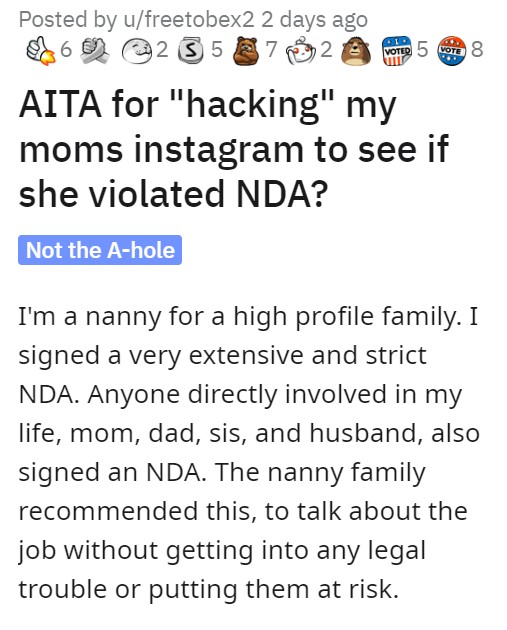 It is about the safety of their children of course so it is better to be safe than sorry. 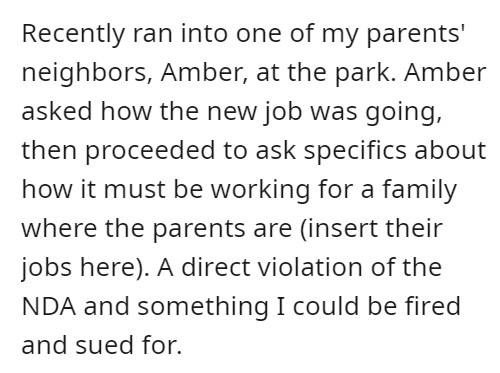 I mean if they made everyone sign an NDA, that means that information probably wasn’t available on the Internet. 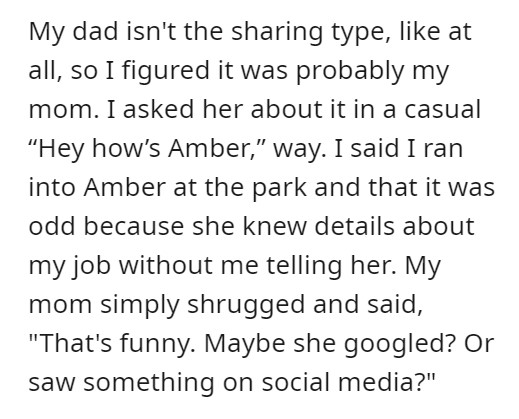 She knew her mother had something to do with it but couldn’t find any proof. 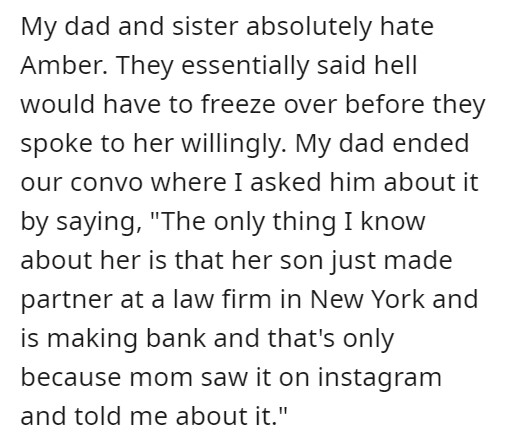 It really isn’t being dramatic when the family can file a lawsuit against them. 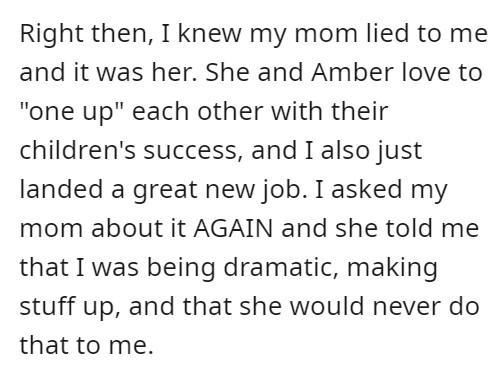 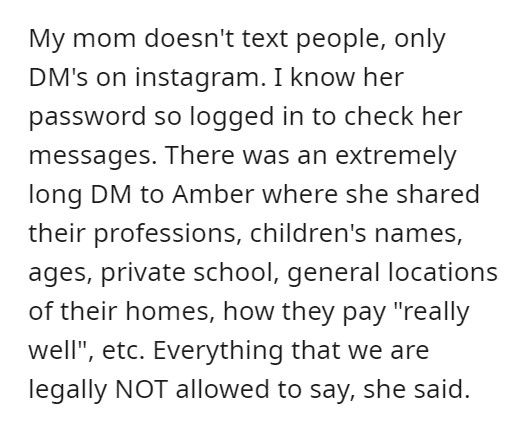 NTA. Ordinarily, I’m not a fan of snooping. But she put your (apparently awesome) job at risk and potentially opened your family up to legal liability. All to one-up a frenemy.

You needed to know who the leak was in case anything got back to your employer. Your mom is the one who cannot be trusted—she is just trying to turn the tables on you. –holyylemons

Children are human beings, not objects for you to brag about to others when it can also put their job in danger. 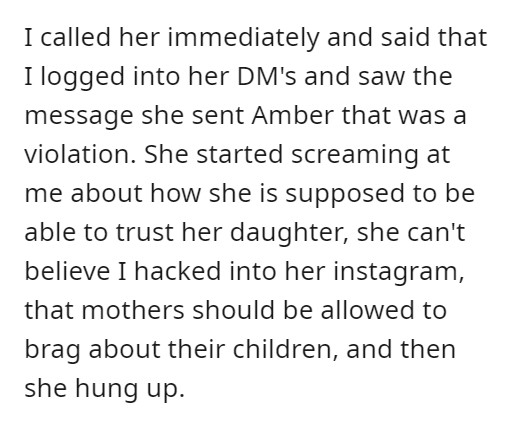 I don’t even have to look at other comments to say that you are definitely not in the wrong here. 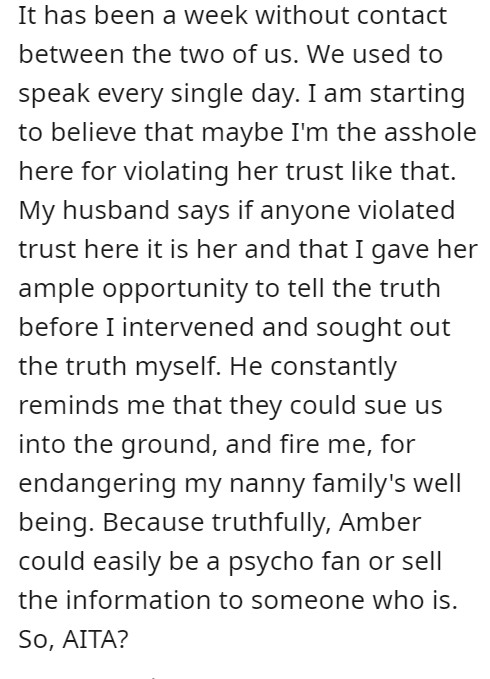 This sort of thing is never okay and her mother needs to make amends somehow. 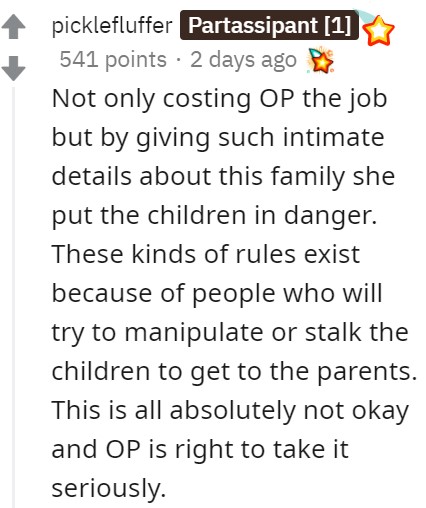 NTA. Your mother took action that could result in legal repercussions, she is stupider than I thought if she sees nothing wrong with doing so. You need to sit her down and FORCE her to listen to you about this shit, and how what she did could result in being sued for I assume, everything she owns, her actions where stupid, and if she does so again you will no longer be sharing any information about any jobs in which you get.

She needs to apologize for putting your job and financial well-being at risk, and she needs to mean it. If she does not, well, she wants to give you the cold shoulder because she fucked up and you caught her? Time to return the treatment, don’t speak to her, don’t respond to her calls or texts or emails or Instagram DMS.

Don’t even act like she exists when she’s around you, ignore her 100% if she refuses to see what she did was wrong. –WolfPetter42

She can start by apologizing but I know she isn’t going to do that. 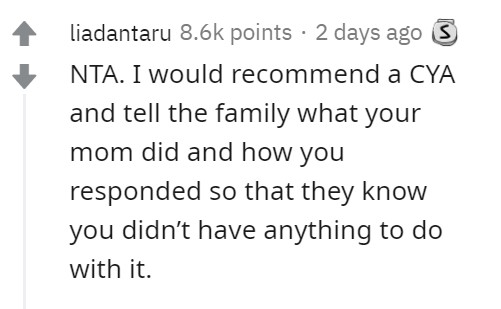 I also think it is better to get ahead of this and tell them outright rather than hiding it. 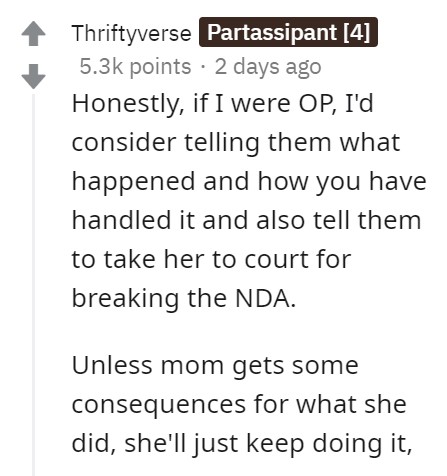 The mother is the one who breached her daughter’s trust and also the law. 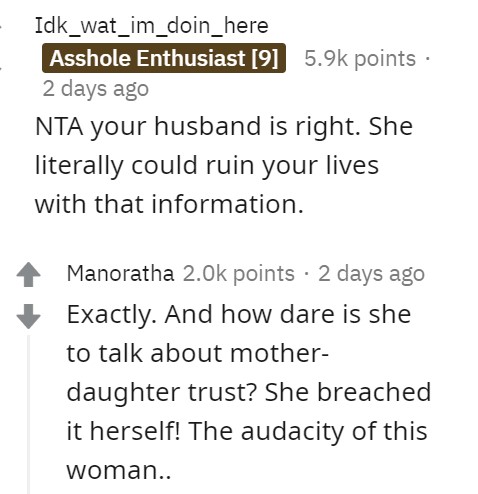 I wonder what the employer will do now. I hope she keeps her job. 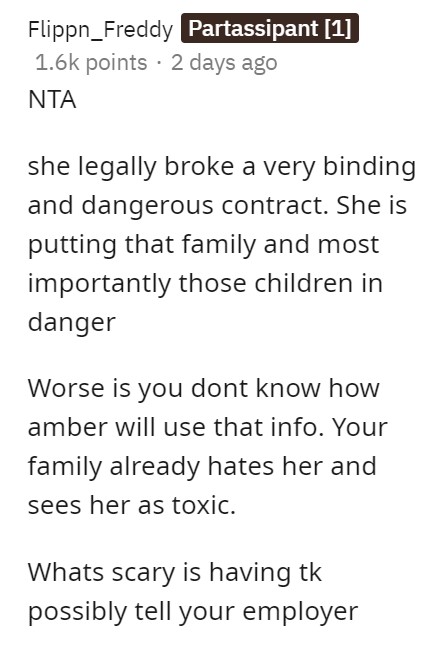 What are your thoughts about this? have your parents ever done something like this? if so how did it go? let us know in the comments below.