And that overreaction can be hiding something deeper. After all a loss of a family member can really affect a person especially if you are young. We never really like to think how our parents might leave us one day and when that happens, it can be a shock and a very difficult situation to adjust to properly. I think that is what might be happening here. You see this sister wants her brother to get rid of his dog just because she is pregnant.

Now I don’t know about you but I haven’t heard of dogs being exceptionally dangerous to newborns. I mean yes, it can happen but who would let a dog be alone with a newborn anyway? As long as the dog is properly trained and has had all the shots, there shouldn’t be any issue. Apparently this girl doesn’t agree because she caused a huge fuss when her brother refused to get rid of his dog. To add on to that, the dog was a gift from his father who is now deceased. So I can understand why he would stand his ground even when the sister gives him an ultimatum.

It seems a lot of change is happening in their lives, and it can cause quite the fuss. 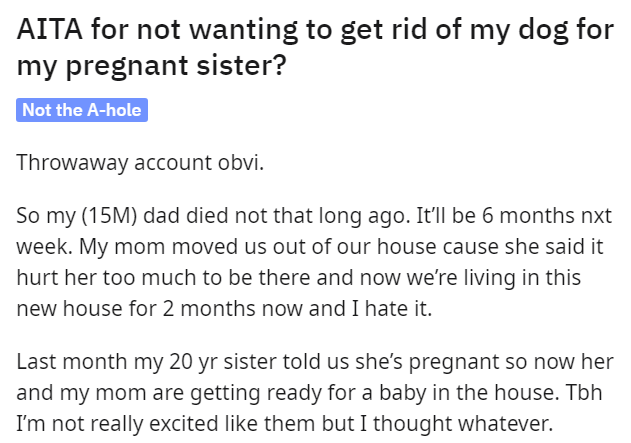 That is honestly not fair of her to ask something like that from you.

But the dog isn’t even dangerous to the baby? Why would anyone make him do this? 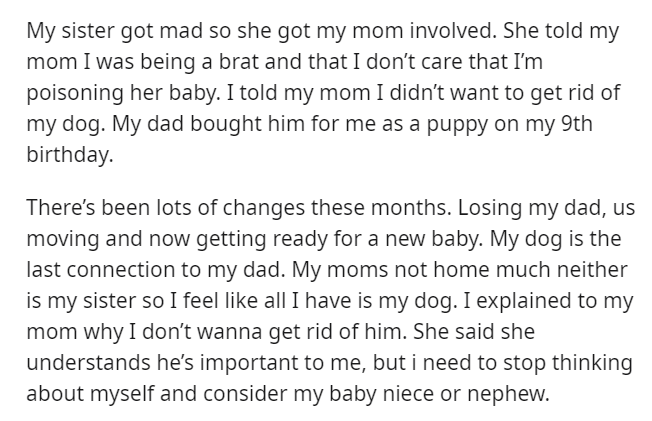 It is quite clear that the sister either has weird beliefs or she just doesn’t like the dog and is using her pregnancy as an excuse. 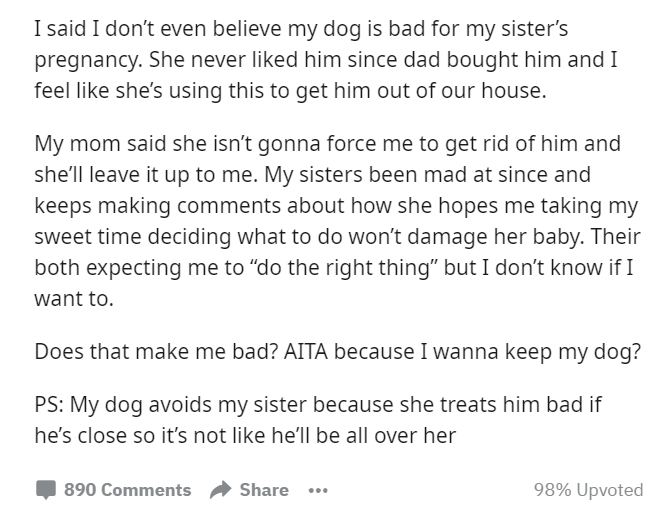 Unsurprisingly enough, most comments were with him and many even provided information. 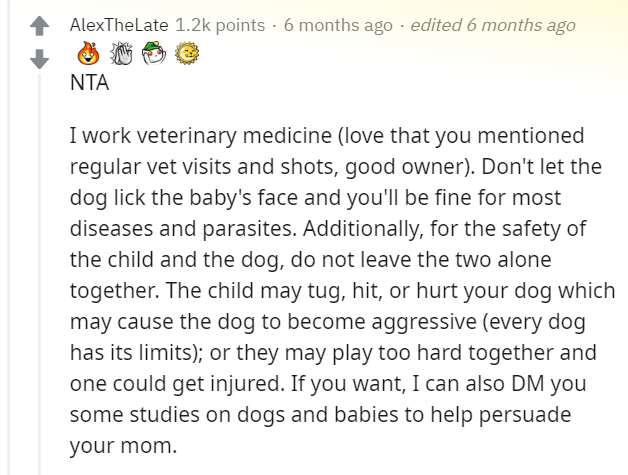 Your sister is talking nonsense. Demand she produce scientific studies showing how dogs are bad for babies. Peer reviewed, laboratory tested, proper science. Nothing else is evidence.

Rehoming a dog is cruel. Taking the dog away from a 15-year-old boy (I don’t want to condescend, but you’re not an adult) after his father, who gave him the dog in the first place, died is reprehensibly cruel. Like, unspeakably so. I’d be livid at this self-important nonsense.

Do not under any circumstances allow them to take your dog away. –SaltyDangerHands

Although getting rid of a sibling is not as easy. Trust me, I’ve tried.

This is especially painful since that dog is essentially a great memory of his father. 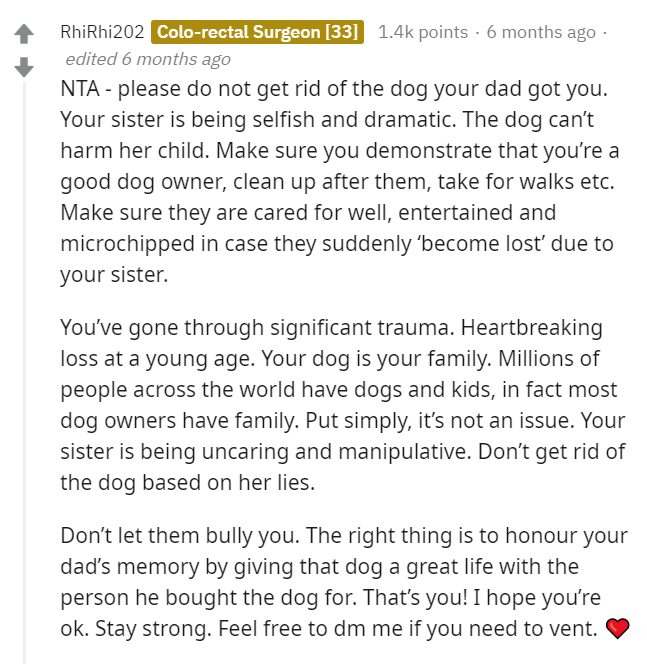 He is clearly going through a lot, and it doesn’t seem like anyone is supporting him. 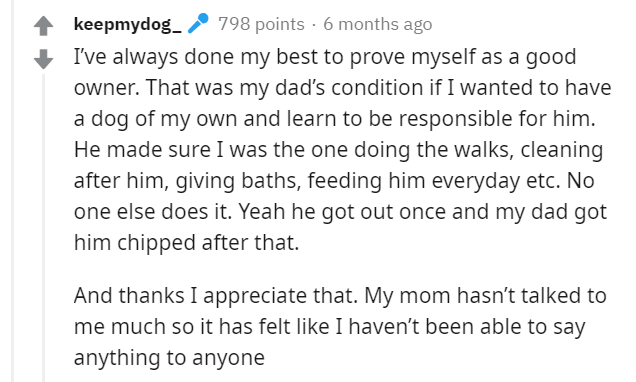 This is one of the many times that Reddit has helped people as he showed all the info to his mother. 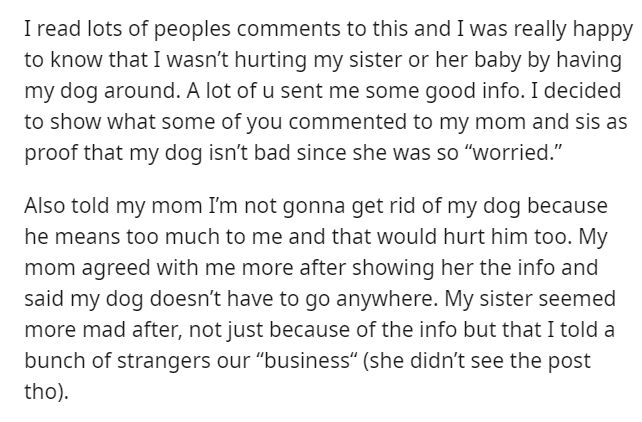 However, that is when the sister gave an ultimatum which was really unnecessary. 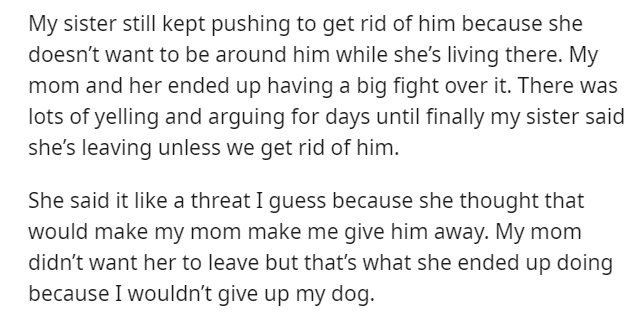 But she ended up leaving anyway. 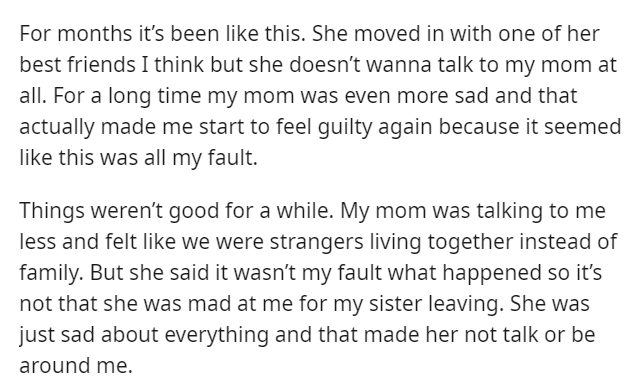 To me, it seems like the family is going through a lot and need help. 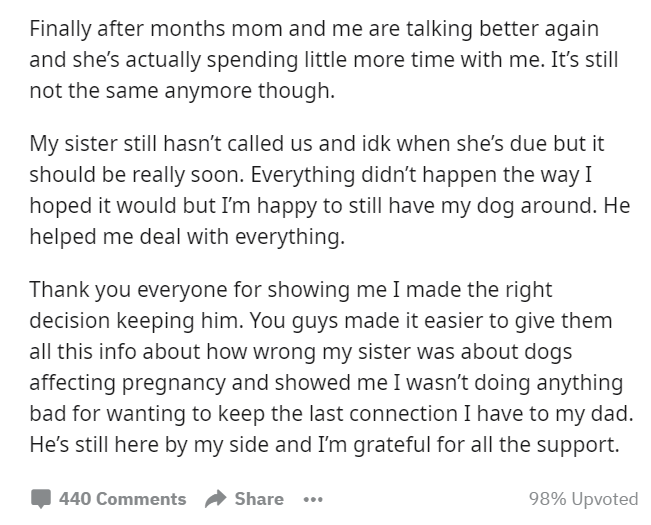 I’m happy it worked out ok-ish but l hope you know there is a very good HIGH chance that your sister will come crawling back after the baby is born. With the way her attitude was she is likely trying to hold out on the guilt trip, but she’s 20 and (is her man even in the picture?) newborns are hard. She’s going to reach out to your mom when realization hits her in the face. She’ll probably throw some guilt-tripping and maybe use the baby as leverage but hold strong because she’s going to realize she needs family and support. –byehuntress

His mother is also dealing with the loss in her own way and might need a bit of support as well. 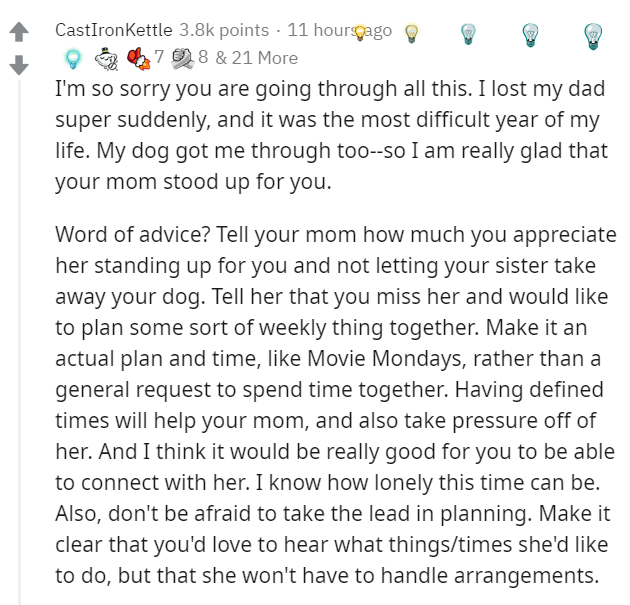 I can understand why he would feel guilty, but it isn’t his fault. 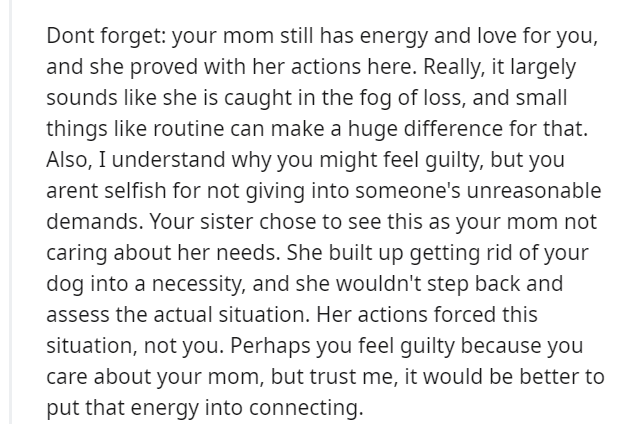 Everyone deals with loss in their own way. And the sister needs to work out her problems as well. Hopefully the family can reunite and move past this in the future. 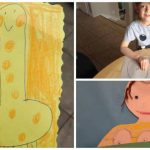 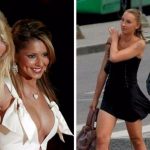 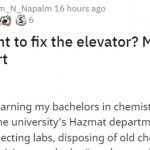 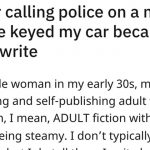 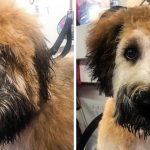