Relationships can be complicated.

It is a bumpy road and it can’t always be butterflies and rainbows. Loving someone is an amazing feeling and being loved back might be the best thing you will ever experience. However, relationships are a rollercoaster ride and you can’t always expect them to be perfect. There will be arguments and misunderstandings and you will have to compromise and sacrifice a lot of things to make it work. But if you truly love your significant other and they feel the same way, all that struggle is worth it in the end. Your relationship can be even more complicated if you both belong to different cultures or races. Your habits can be very different and your family might not support you being with someone outside of your ethnicity. However, all that can be worked out if you really want to be with someone.

This man shared his story on Reddit about meeting his Hispanic girlfriend’s family for the first time. They had a few problems with him being white and passed comments about him in Spanish without knowing that he understands. He finally let them know that he speaks Spanish after they were done criticizing him in Spanish and they were all very embarrassed. However, the girlfriend’s sister blamed him for eavesdropping so he asked if he did the wrong thing by not telling them. Scroll down below to read the whole story and make your own judgment:

The man was white but he was adopted at the age of 5. He had a Mexican mother. His girlfriend did not know he was bilingual. 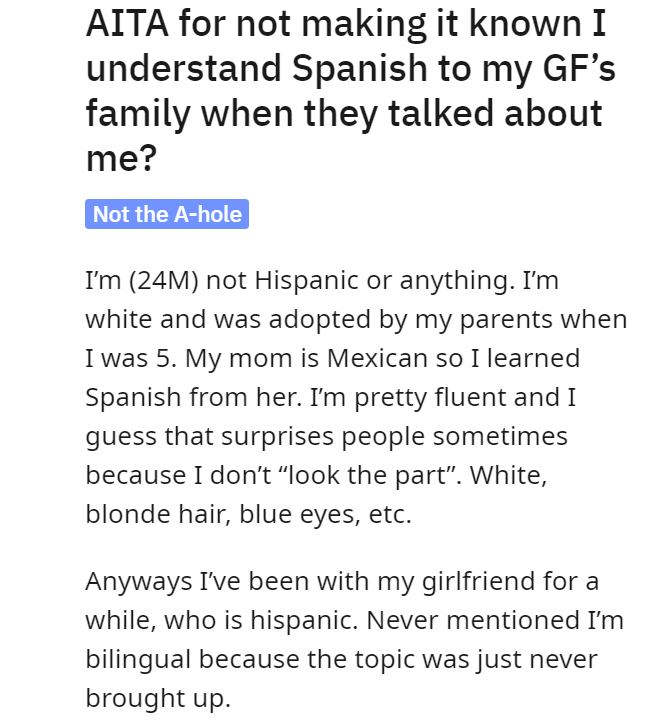 He had a meeting with his girlfriend’s family over Zoom. They all seemed very nice at first but then they started talking sh*t about him in Spanish. 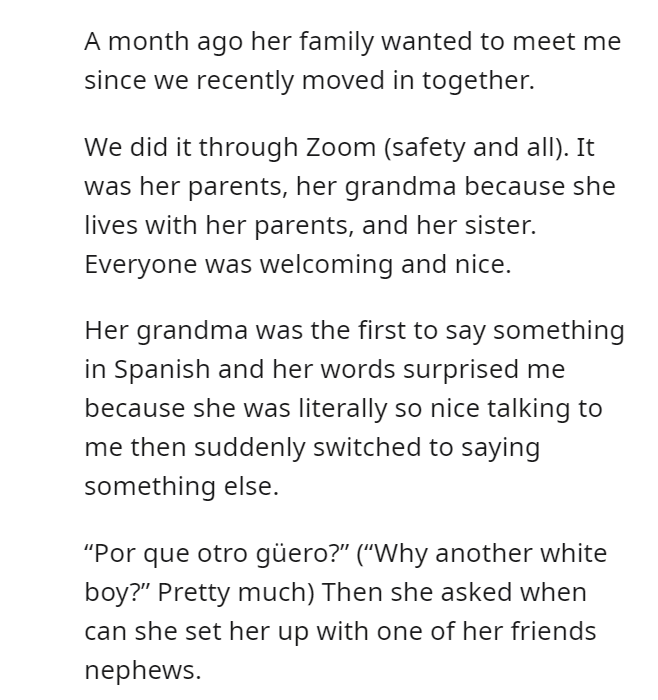 His girlfriend shut them up whenever they made a comment about him. 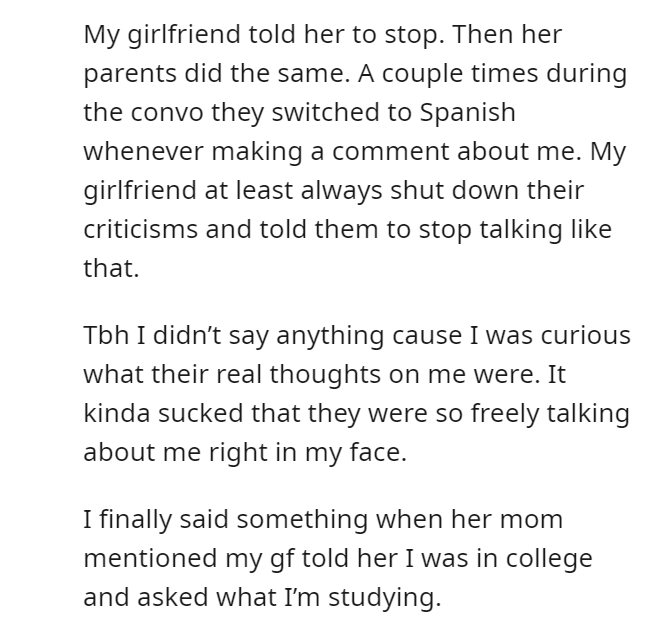 They were accusing him of mooching off her, even though that wasn’t the case. He was listening and understanding everything, so he finally decided to answer them in Spanish. 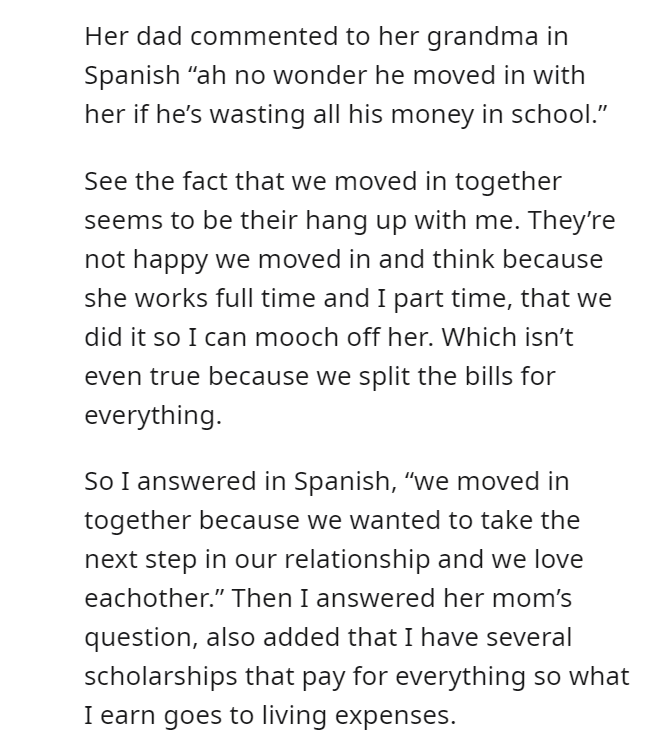 The family was petrified and immediately apologized for their rude remarks. His girlfriend didn’t seem to mind but her sister said he was being petty. 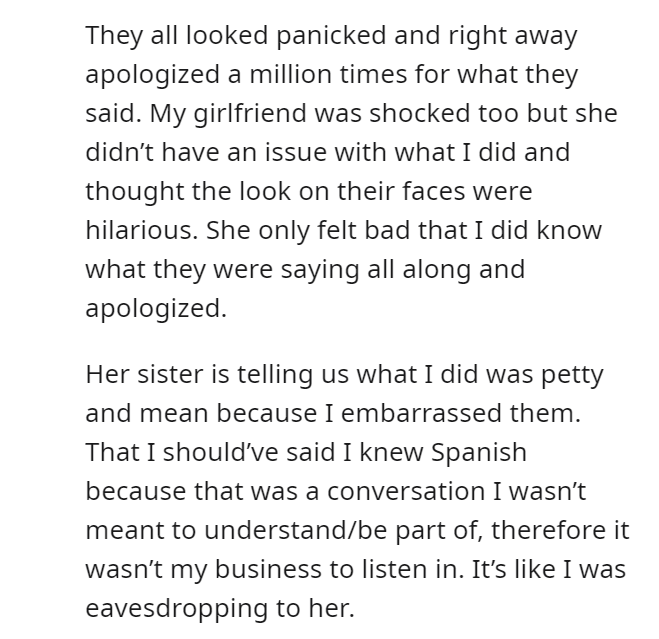 So, he asked if he was wrong for eavesdropping on them like that.

In my opinion, the guy isn’t to blame here. His girlfriend’s family was being racist and mean for absolutely no reason. And not to mention it is extremely rude to speak in front of someone in another language only to talk sh*t about them. The man should be glad he found out what his girlfriend’s family actually thinks. The only people who are wrong here are the girl’s family members.

Other Redditors shared their opinions on the story: 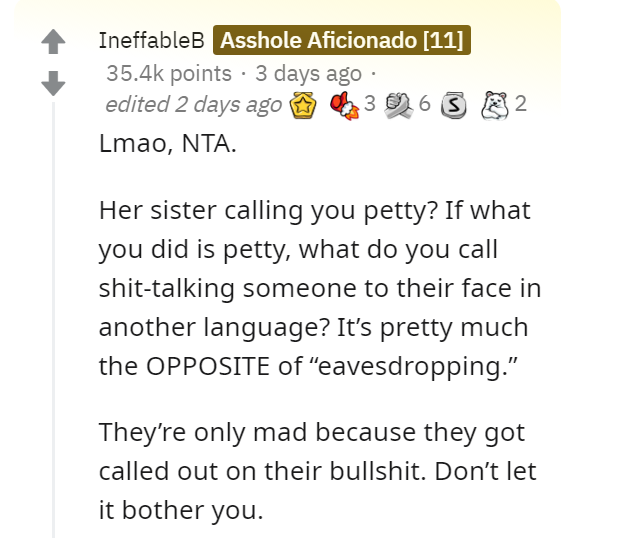 Her sister called him petty when they were the ones that were talking about him. Hilarious.

Private talks aren’t meant to be spoken in front of someone. 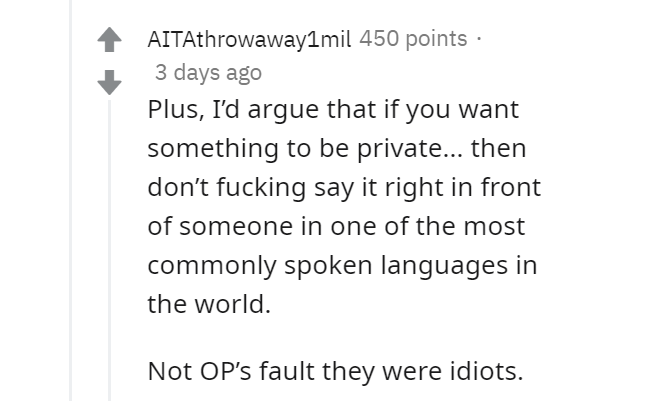 This person said that the family was decent because they apologized right away. 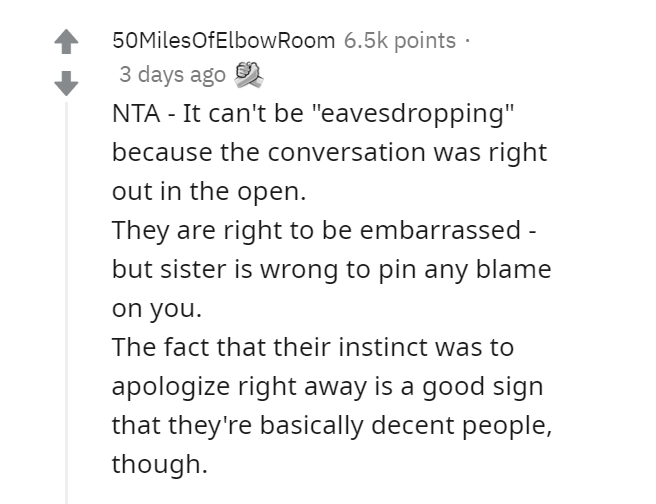 However, others disagreed. They only apologized because they were embarrassed. 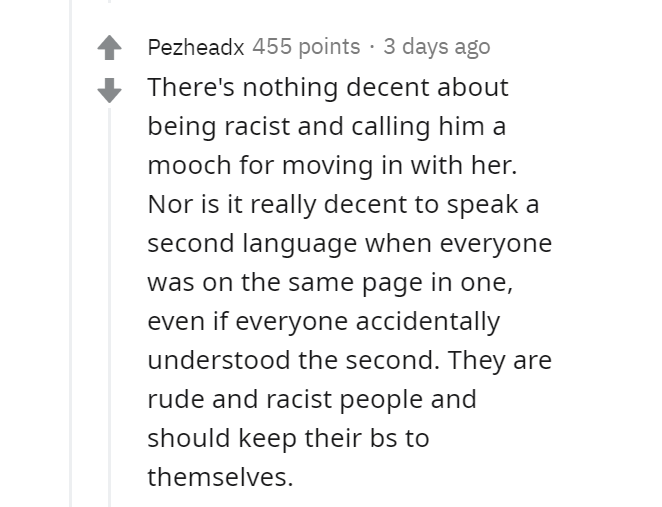 They are only sorry they got caught. They don’t regret their actions or mean comments.

How do you move in with someone without telling them you’re bilingual? 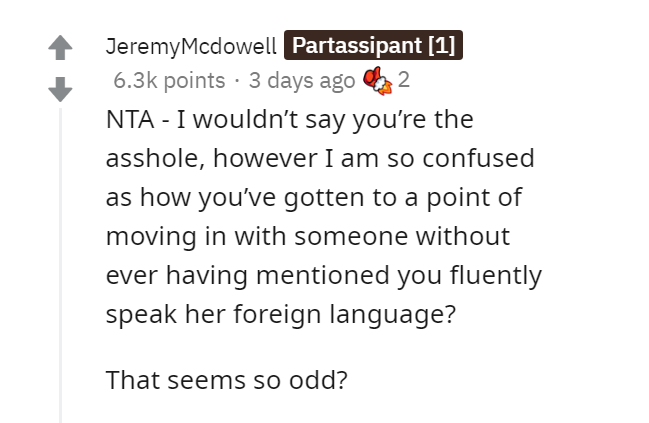 The family was racist and rude. They are the only ones to blame. 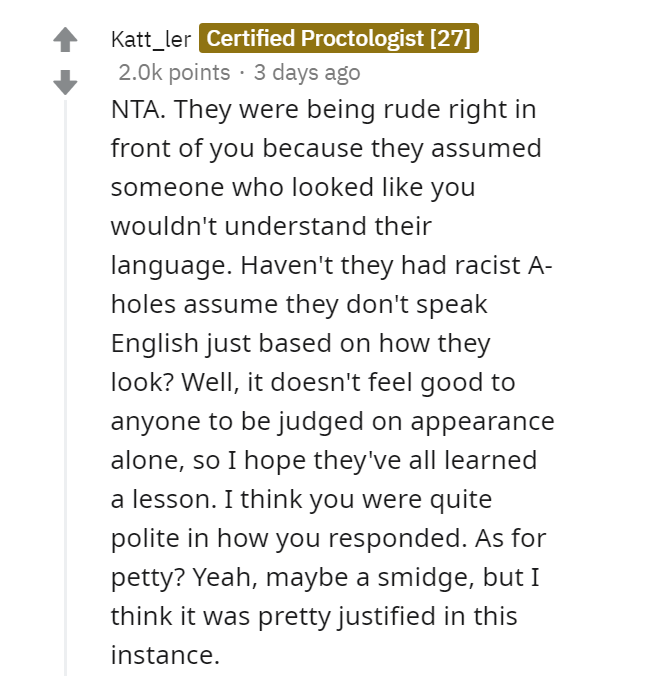 Who do you think is in the wrong here? Share your opinions with us in the comments below.