A double wedding isn’t as fun as it sounds.

I know many people seem to think that having a double wedding can save up on the total cost and while that may be sometimes true, most of the time, it doesn’t end up being as without hassle as everyone thinks. We are already aware of how stressful the wedding day can be for everyone and adding another bride and groom to the mix can mess everything up. Especially if you don’t have a great relationship with them.

Weddings are already a hub for airing family problems and they can devolve into fights and this usually happens more often in double weddings. So when these parents wanted her daughter to share her wedding day with her sister, she was less than thrilled. Because while she isn’t a big fan of her sister, she straight-up hates her sister’s fiance for good reason according to the reasons she later explains.

You can read the wholes tory for yourself by scrolling below.

Because of the pandemic, many weddings have been postponed as they should be. 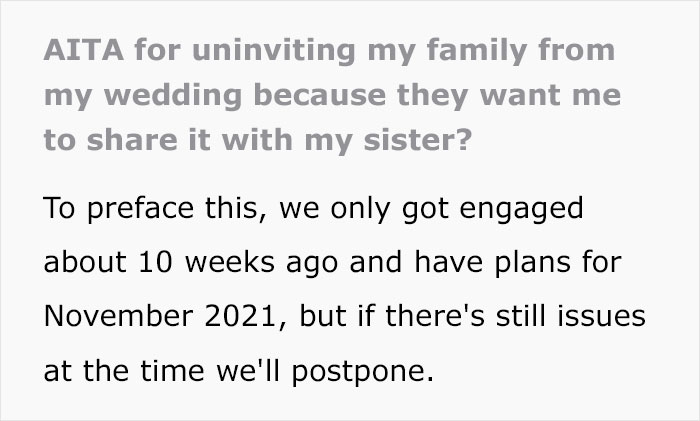 She then starts to explain why she doesn’t like her sisters’ fiance.

Not only is he incredibly rude but he also doesn’t find it wrong to flirt with his fiance’s sister. 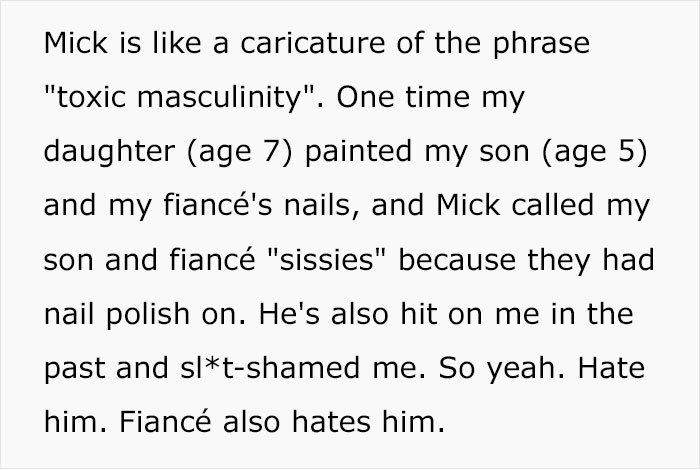 So when her parents agreed to pay for some of the weddings since they wanted more guests.

She was fine with the whole thing but everything went down the drain soon enough.

You see, her parents wanted her to have a double wedding with her sister even though they know her issue with Mick. 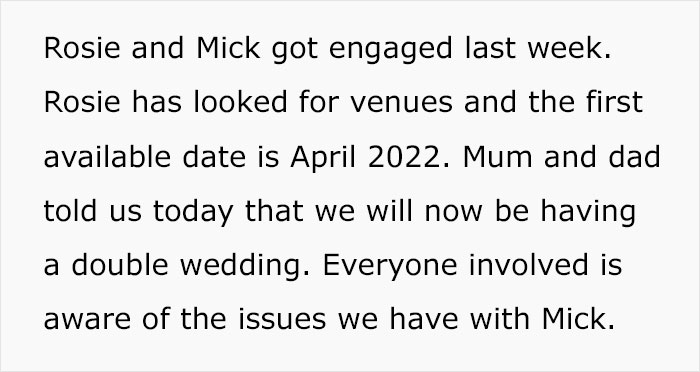 As you can imagine, she was none too happy with this development and refused.

Rather than understanding where she is coming from, they only exasperated the issue.

They just weren’t able to take no for an answer. 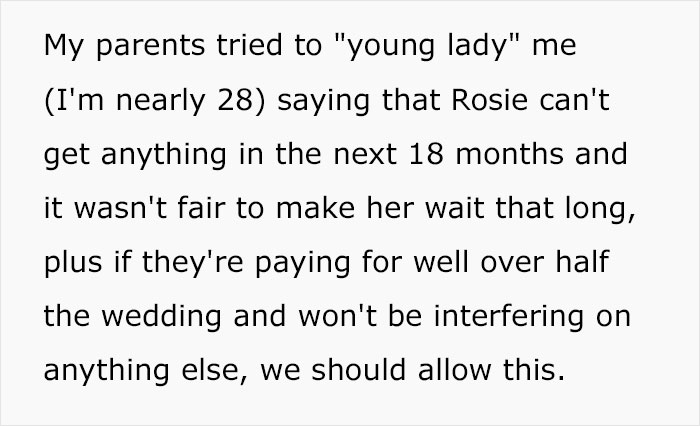 So she uninvited her parents entirely.

However, this has led to her being ostracized by her entire family. 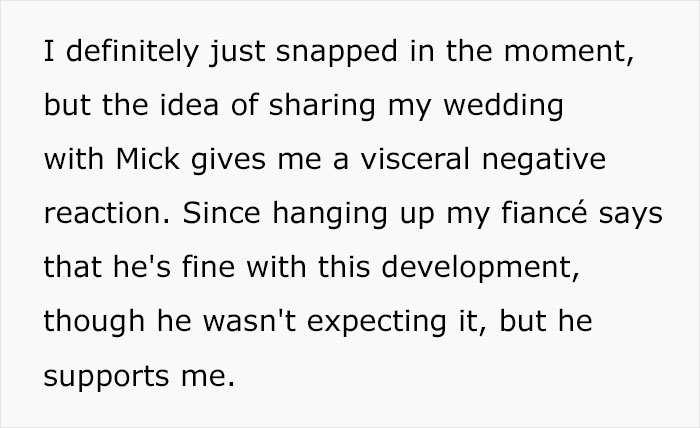 And why the hell can’t sis wait 18 months??! I don’t get it. You plan to spend your entire life with someone, why does waiting for that for a whole 6 months make any difference? I’d get that if this was a family that insisted on the virginity cult, but clearly this isn’t the case here (unless Op’s kids are the second and third coming.)

Honestly, I think your parents have kind of done you a favor. No longer do you have 40 unwanted guests, but you also don’t have your sister’s fiance. Your parents don’t sound like much of a loss. Sorry, but they’ve consistently been pushing their own agenda on your day. –Sfb208

Everyone is saying that what she did was wrong and she shouldn’t have made such a big deal about it.

Her brother, however, has given her advice. 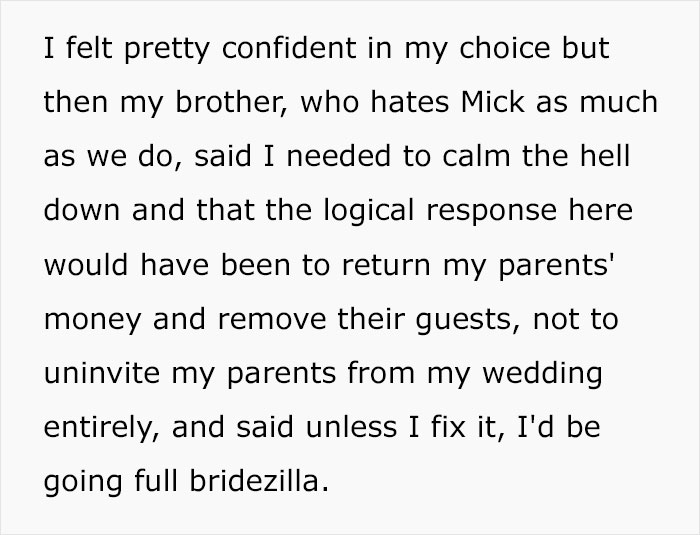 But at the end of the day, it is her decision.

Most of the people in the comments are surprised by her family’s behavior.

Others also advised her to think about it.

After all, this is an important day and she might want her parents there. 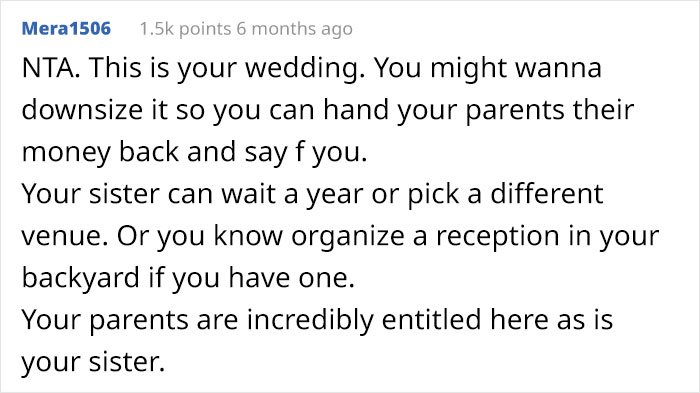 Even if she doesn’t want a double wedding.

She can reason with her parents and simply invite them without taking their money.

This is her and her Fiances wedding day and no one else should be entitled to make decisions about this day. 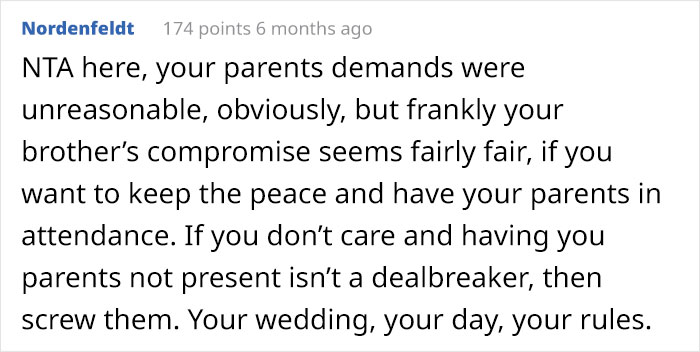 She clearly made this decision in the heat of the moment.

And no one is 100% correct here except maybe her brother.

Personally, I’m not against the uninviting. Considering how unreasonable OP’s parents were acting, I wouldn’t put it past them to try and hijack the wedding so OP’s sister and BIL can tie the knot too. That’s why I think, for the time being, uninviting them sounds like a good idea. That doesn’t mean they can’t talk it out and possibly make amends before then, though. After all, they still have over a year before the wedding. –Cyclonic2500

What do you think the bride should do here? Comment down below and let us know your opinion.