Babysitting is a thankless job.

I know it is the first job many people do when they are still young and can’t get a job elsewhere. And you would think it is because it is easy. But who ever said taking care of kids is easy. I understand if the child is a bit older, it might not be as physically tiring as a physical job, but it is still work, and you expect to get paid. However, many parents use these young still in high school kids as a source of cheap labour.

But this is not the story of a teenager’s first job. It’s about a woman who was too cheap to pay her ‘supposed’ friend what is normal for babysitting. I understand that sometimes you expect your friends to do you a favour. But this was a job, and she had even asked for a raise prior. So the only thing to do in this situation was to quit and work elsewhere right? After all she has to pay her bills as well.

Apparently that is not the right answer as the woman she worked was less than happy. You can just read what she posted on Facebook by scrolling on below and taking a look for yourself.

This woman is clearly not great with maths from what I can read here, or she is delusional. 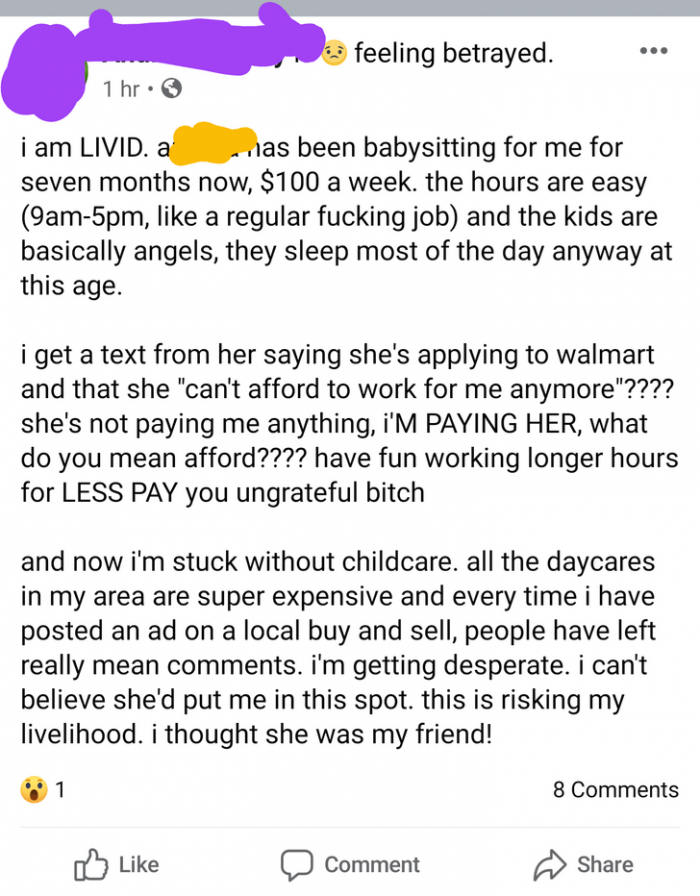 Even with taxes, that is still quite little pay for the hours you described. 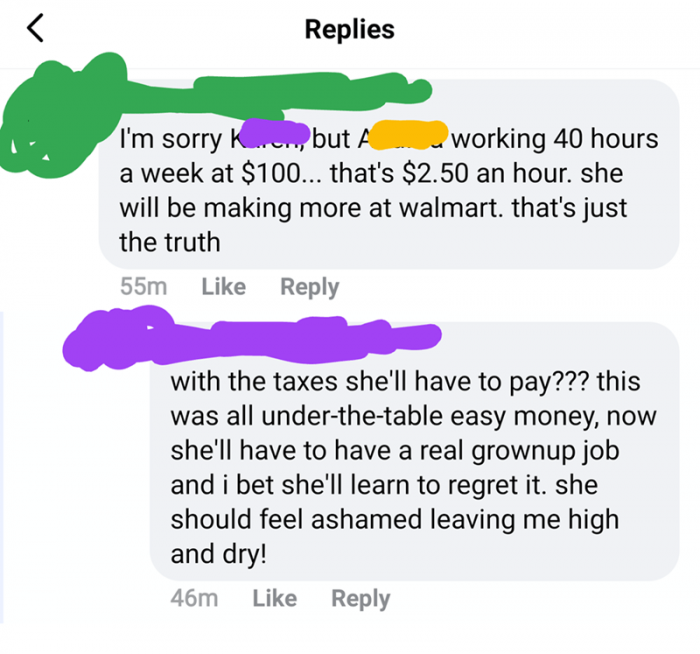 But the babysitter wasn’t going to let it go without a proper answer. 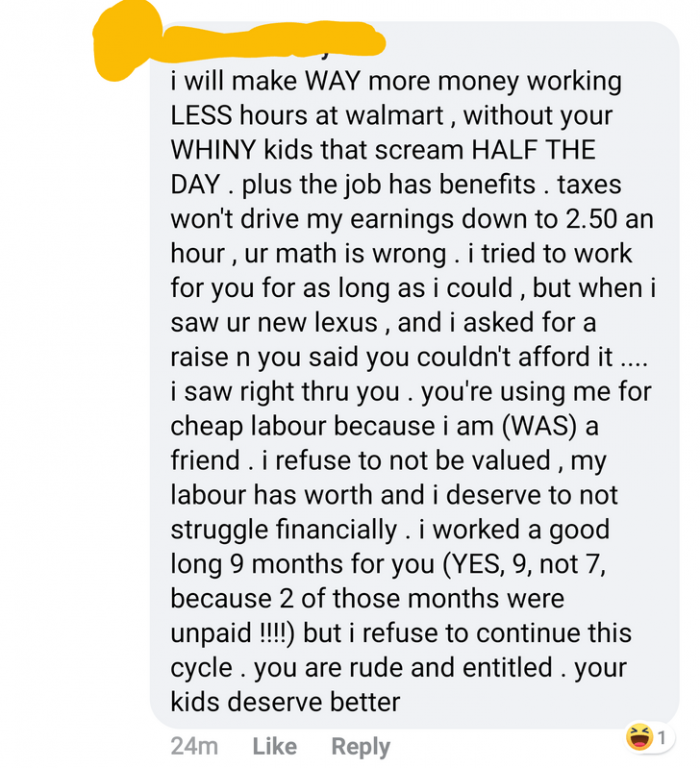 This sort of thing isn’t even rare from the looks of it.

I had a neighbour that I used to nanny for while I was living with my parents and going to college. She had 3 boys (3, 8, 10 if I remember correctly). I had been looking at nanny jobs that paid $400-500 a week, but she convinced me that being nearby was a huge advantage for me, so I agreed to watch them for $10/ hr for about 20 hours a week (an hour before school and 3 hours after). It wasn’t an easy job (the 3-year-old wasn’t potty-trained at that point, and the 8-year-old had ADHD/ was on Ritalin and I had to try to force him to take this medicine that he didn’t want; he couldn’t concentrate, regardless of whether he took it, and hit his head when the answers didn’t come easy to him on his homework, which I also had to help him with), and it wasn’t flexible with my school schedule, so I sometimes had to miss class when the parents were running late. I also had to drive the 3-year-old onto the military base for daycare every day, and they often didn’t put gas in the car, so I’d have to fill it up.

There was one week in particular where they talked me into staying with the kids on a day off, and maybe there was a parent/ teacher conference that week… anyway, I ended up working 45 hours that week. I wrote down the hours every day, down to the minute, and turned them in on Friday. When I handed it to her, she got mad at me and told me it was ridiculous I wanted that much money. I told her that’s what we agreed to, and she knew I was working extra hours at the start of the week. Fuming, she wrote the check. The next day, she texted me asking if I’d be willing to work for a flat weekly fee of $250 and work more hours. I told her absolutely not, she was already paying me too little (I could barely afford my school supplies, and I hadn’t been able to fill my car up properly in months), and I couldn’t work more for less. She told me not to show up any more, and that she’d have someone else do it.

She never did find a new nanny (I think her MIL ended up moving in with them to watch the kids), and she spread very nasty things about me to the other neighbours. Furthermore, she moved away a few years later, never having spoken to me or my family after I quit. I mean, she was underpaying me from the start (I’ve always thought $8-10 per hour per kid is about right, more if the kids are in nappies; hell, I had a babysitting licence and a CPR certification), and she had the absolute nerve to ask to pay me less?? It makes me angry now, almost 10 years later. –Rosenblattca

Is it really even surprising that this woman resorts to insults? I wonder why no one works for her. 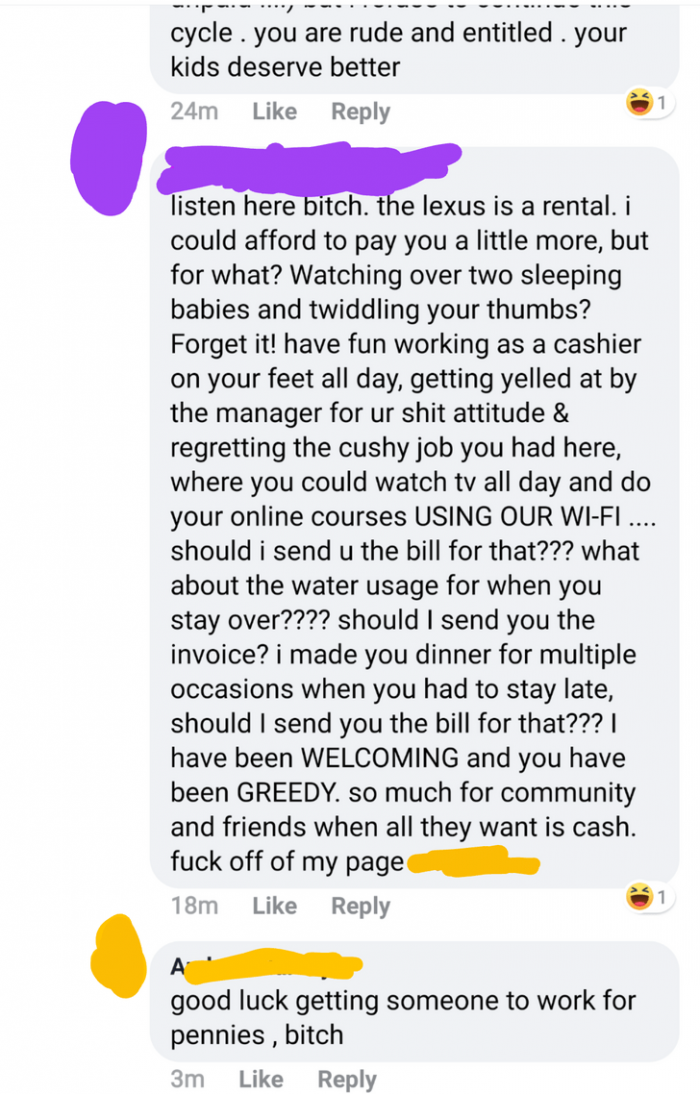 “I made you dinner when you had to stay late”

So… on the days the babysitter had to work more than 8 hours, she wasn’t paid for the extra time she worked, but was given dinner?? So she was making less than $2.50 on those days…

But free dinner. Because you can pay rent with free dinner right?? –whitewallpaper76

Would you ever work for someone like this for such little pay? Have you ever worked in a similar situation? Share your experiences in the comments below.