These animals just met their superheroes.

We often see our newsfeeds filled with pet animals being adopted or bought every single day, like I only see animal feeds on my FaceBook and nothing else, it’s because I love them so much. But the reality, things aren’t this simple and happy. What we see are incidents that don’t happen too often which is why they go viral so quickly. Unfortunately, over a million dogs and cats are euthanized each year. Those poor abandoned and stray animals who end up in shelters don’t get adopted too easily. People tend to prefer buying new pets from pet shops. This in turn causes animal shelters to fill up with no room for more, resulting in the undeserved authorization.

In this world that I have just shown you, which is absolutely real and not a scary illusion, anyone in this world who chooses to go for adoption is considered a king or a superhero. The reason why I or everyone calls them heroes are quite a few. First and most importantly, by adopting these poor animals they give them a new forever home and a new purpose, a new story where the only emotion they are supposed to feel is happiness. Nothing else! Second of all, these superheroes are actually doing a huge favor to all the animal shelters. By adopting the animals in those shelters, there will automatically be room for more resulting in the reduced authorization. This for me is the most important part. One human taking the big step to give a poor animal the best time of its life can ultimately save the lives of so many more.

Today we have got 20 animals wh met their superheroes just when they needed them. Their stories are absolutely heartwarming to read through and trust me when you do such a thing for an animal, they never ever forget it. They remain grateful and that is why I love them from the moon to back.

1. This superhero adopted these two little guys who were very quick to make themselves comfortable at their new furever homes. 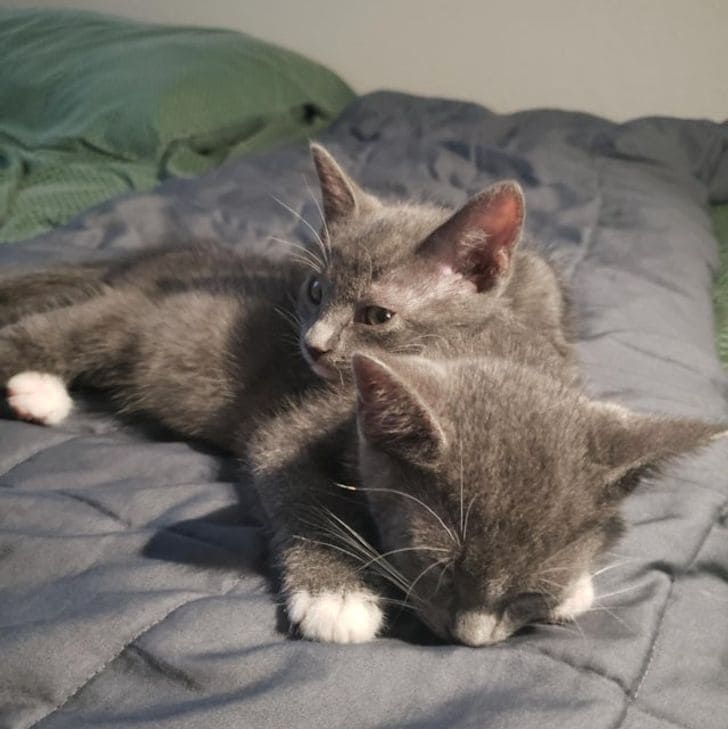 It’s only a matter of time when they best meets its match things become good again.

2. These 2 stray cats gave birth under this family’s house. The superheroes decided to take the whole family in. 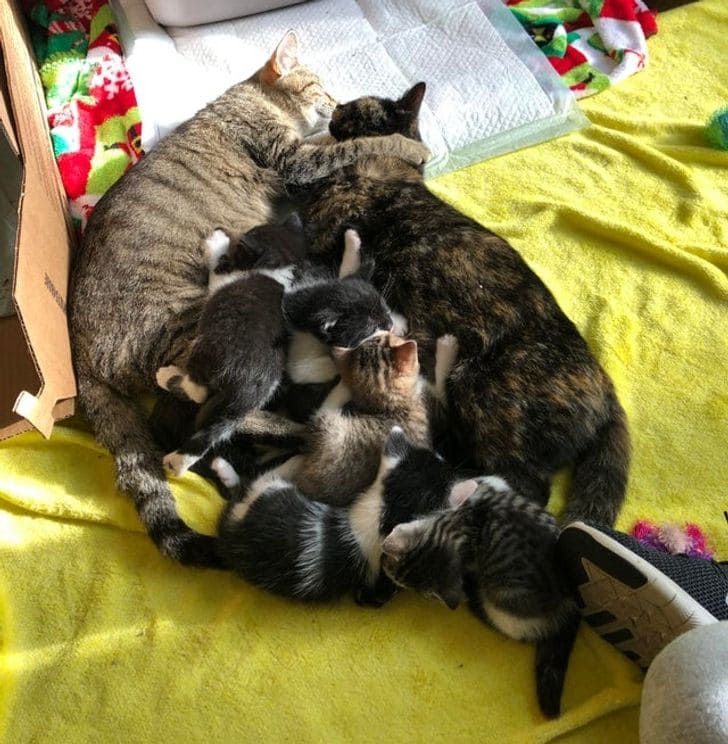 It is very clear that newborns require a lot of close attention and care and the presence of their parents. Such a great act!

3. This hero had decided they needed companionship so they adopted this adorable 4-month-old Bunsen from the Humane Society. 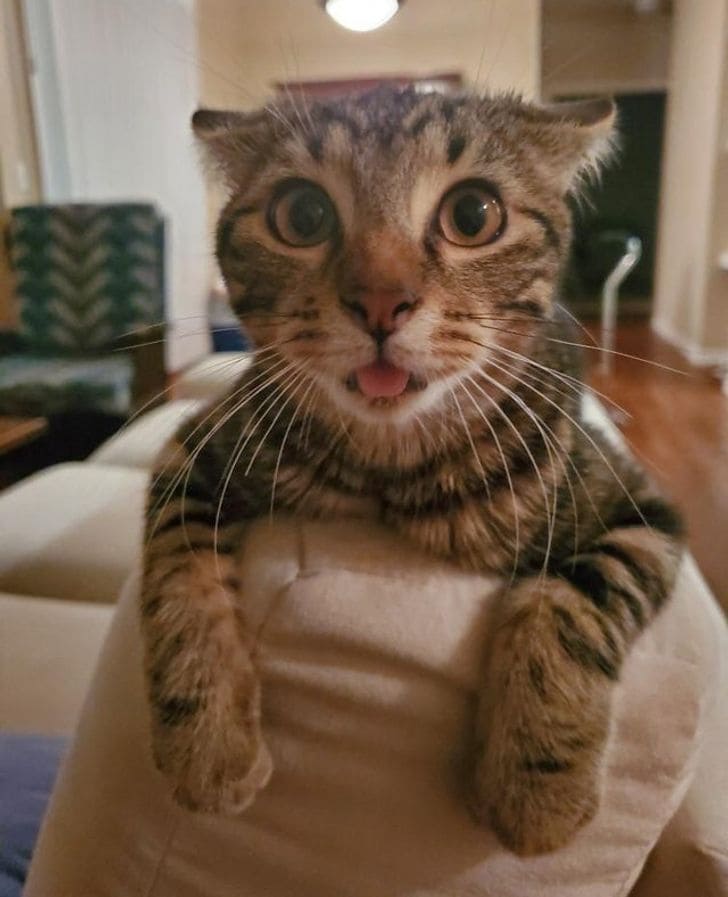 Cats are very good companions. They would do anything in their power to keep you happy and positive.

4. This 11-year-old kitty wouldn’t let anyone touch it for months since adoption. A year later, her favorite spot is Mommy’s lap! 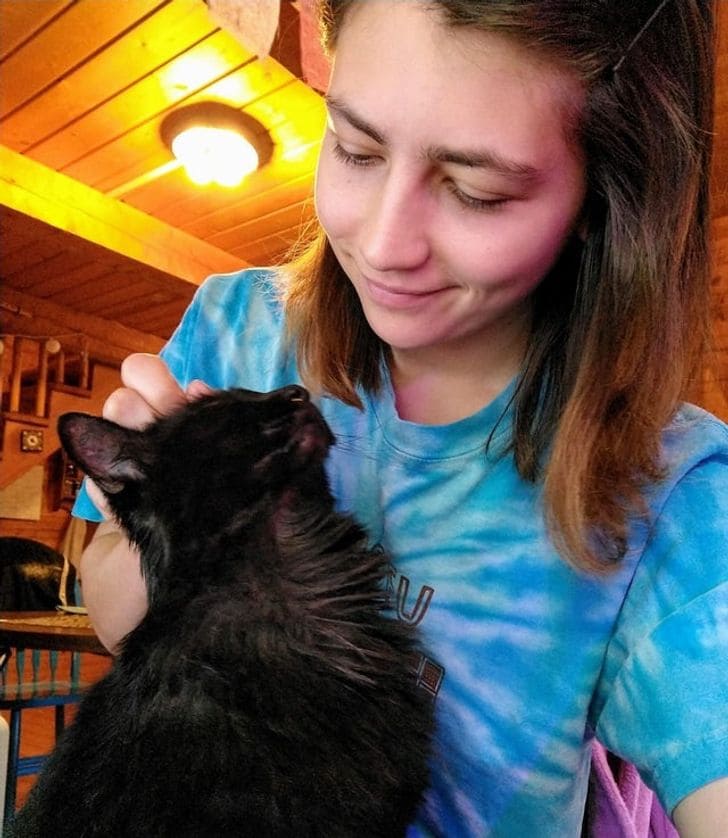 It’s not easy for animals to quickly start trusting humans once again. You don’t know their past or what hardships they had to face to come to this point. So, every owner should be very patient with their pets because eventually, they will lower the barriers.

5. This person adopted a new kitten but was scared that it may not bond with their other cat. This is what they returned to from work. 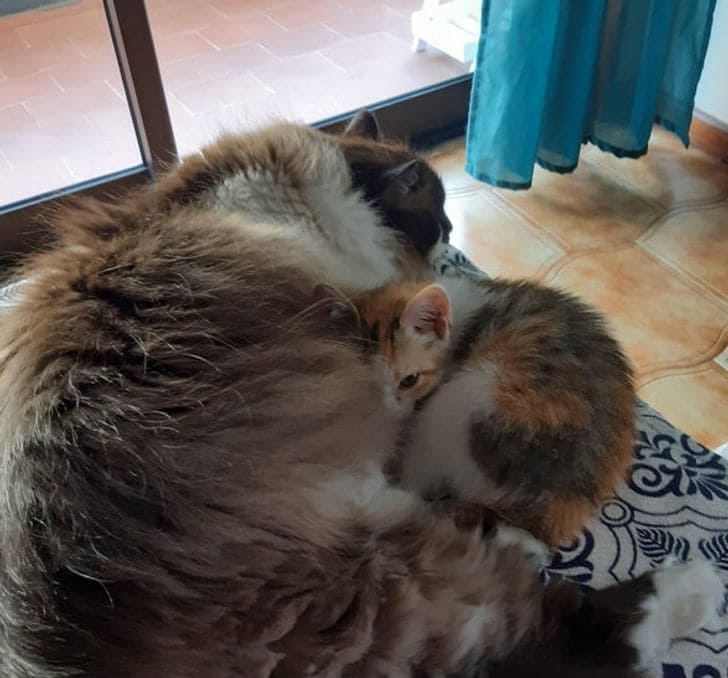 6. This is Woody. His superheroes adopted him from SPCA. He is a big cuddler! 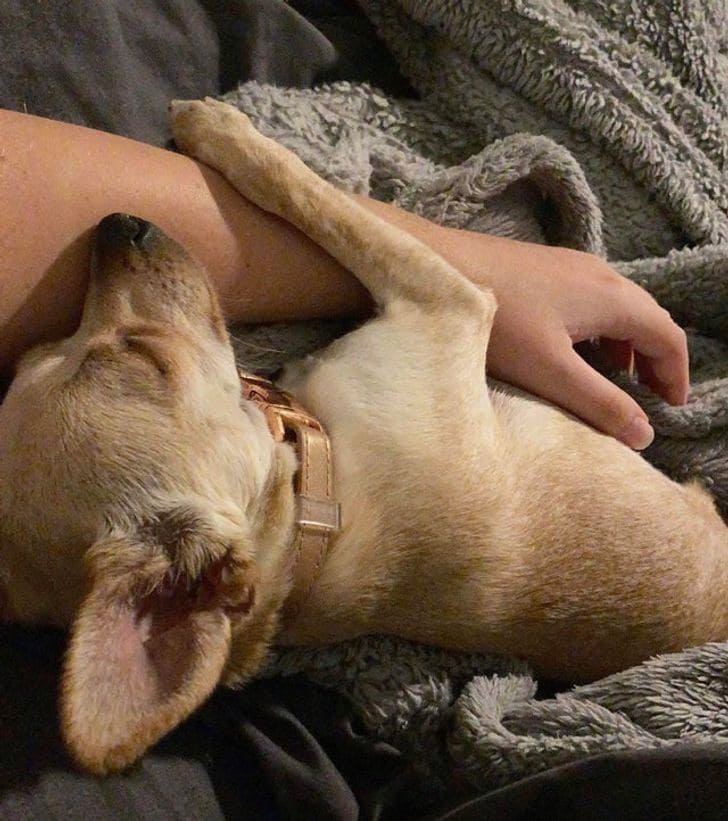 It’s like the doggo had been waiting for ages to cuddle someone and all that desperation is now being happily exerted.

7. This little girl just met her forever superhero. She has one eye but love, it’s blind! 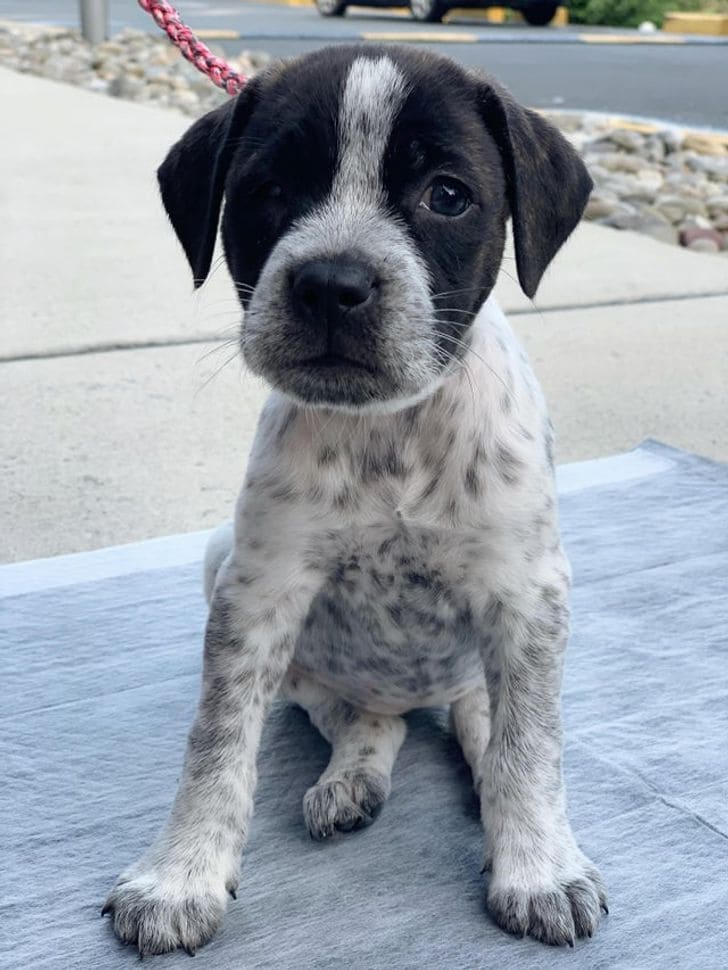 This is so wholesome! I love such people who don’t discriminate against animals based on how they are or how they look. Love is limitless!

8. This superhero Dad and his neighbor decided to take these two cats who lived in their garden and have also agreed to mutually pay for their expenses. 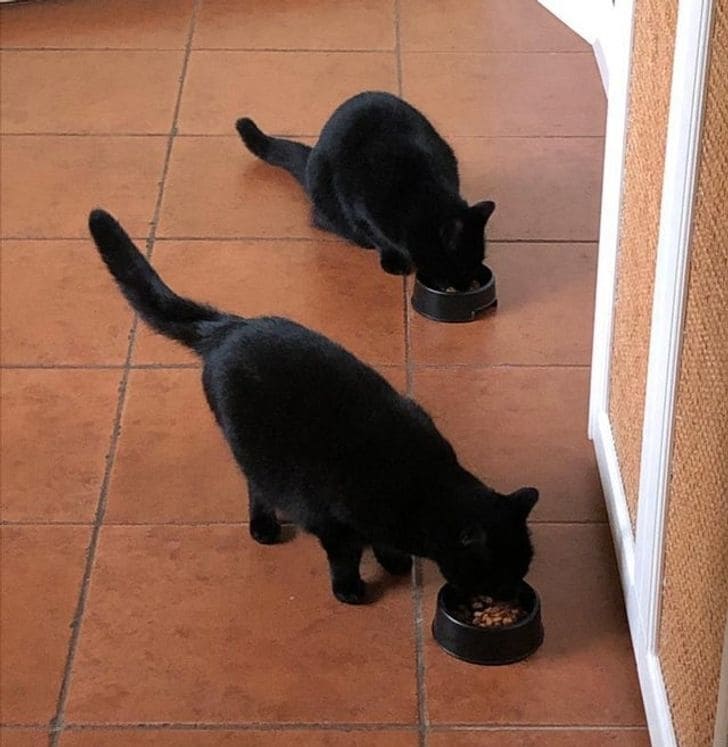 A heroic bond between two neighbors? Now that is a sight you don’t get to see every day. For us? Rarity/ For the kitties? A win!

9. “One month ago I found a stray kitten outside my apartment. This is Una on the day I found her compared to today.” 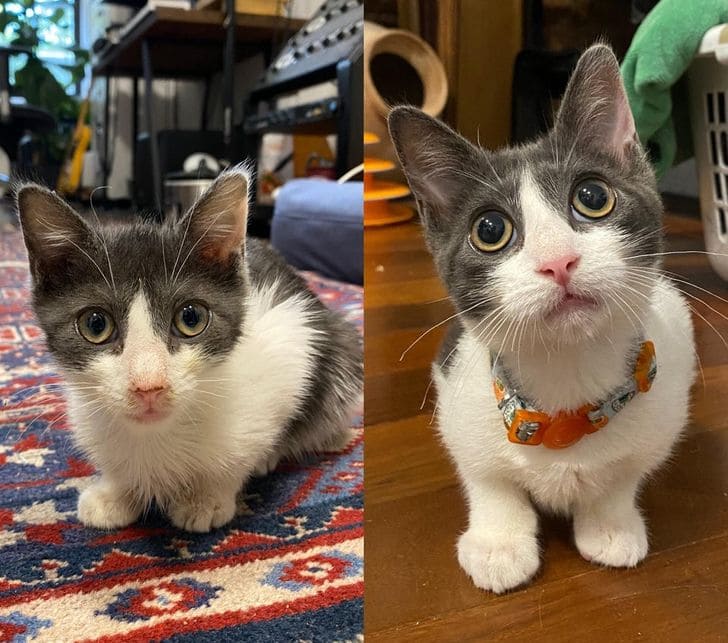 10. Here you see a stray cat who adopted this human. 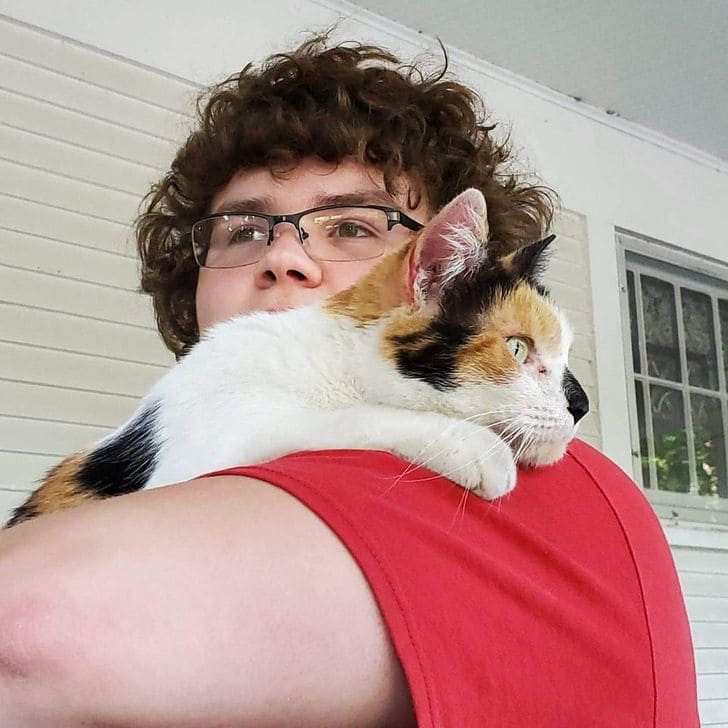 The queen has already found her favorite spot.

Knowing such super people exist helps a lot when thoughts of animals being abandoned every day come to mind. It is so disappointing and hurtful but as they say, you should always exploit the brighter side. I am so happy these animals met their superheroes right on time.

11. Shadow’s tail has not stopped wagging since adoption!

This is so cute! When a dog shows you their love, please savour it! 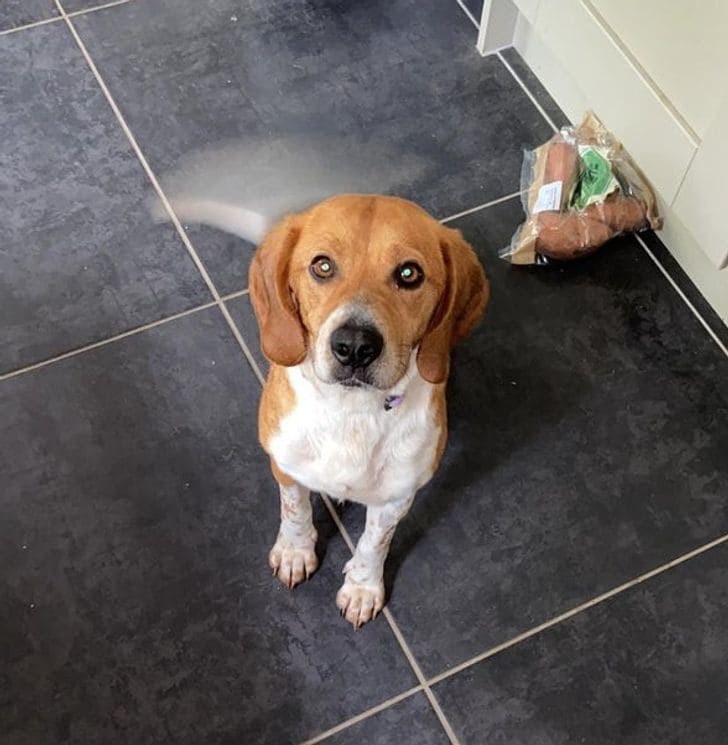 12. These two adopted brothers love sleeping anywhere but only if they are together. 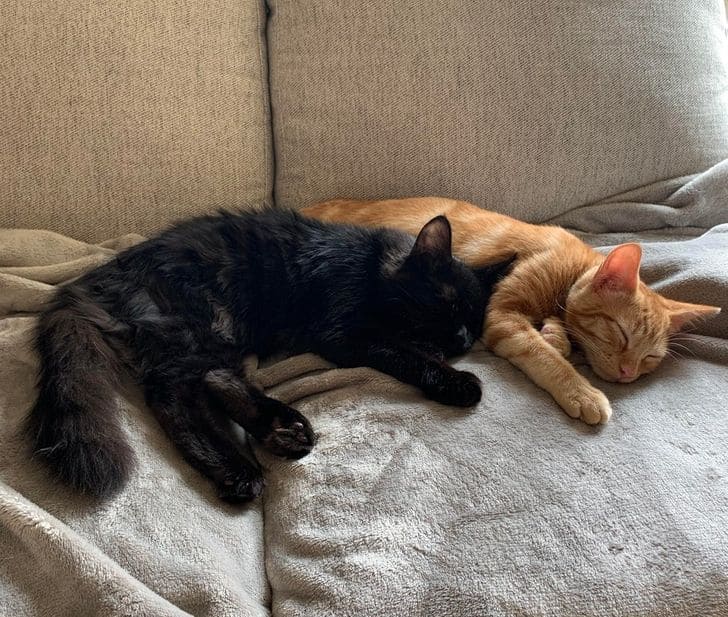 This is the time of bonding animals expect from their owners as well. They are very willing, trust me. They only require love.

13. This is Daisy. Missy only took 6 hours to settle in after adoption! 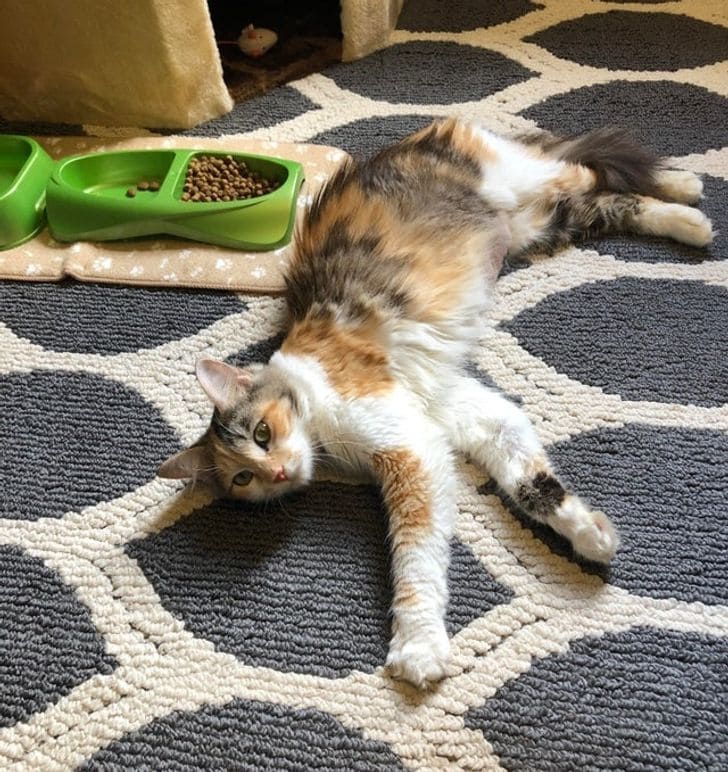 It’s like they already know their “one” is arriving.

14. A stray cat followed this person home. They decided to get a clearance from the vet and went on to adopt him. Here’s the cat meeting his brother, Noodle, for the first time. 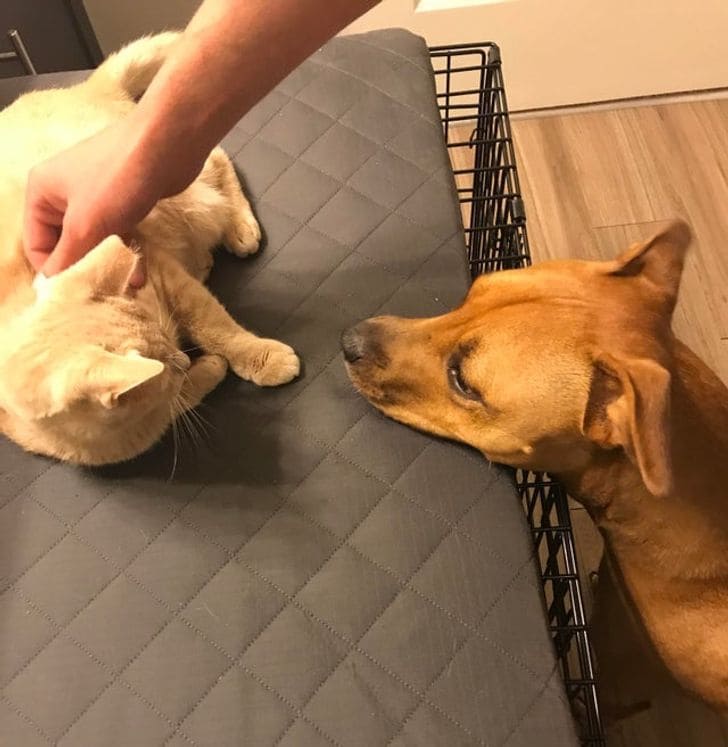 A cat who decided to adopt a couple and an animal who is famously known to be their arch-nemesis.

15. This person who was feeling very lonely for months finally decided to adopt this gorgeous kitty, Frodo! 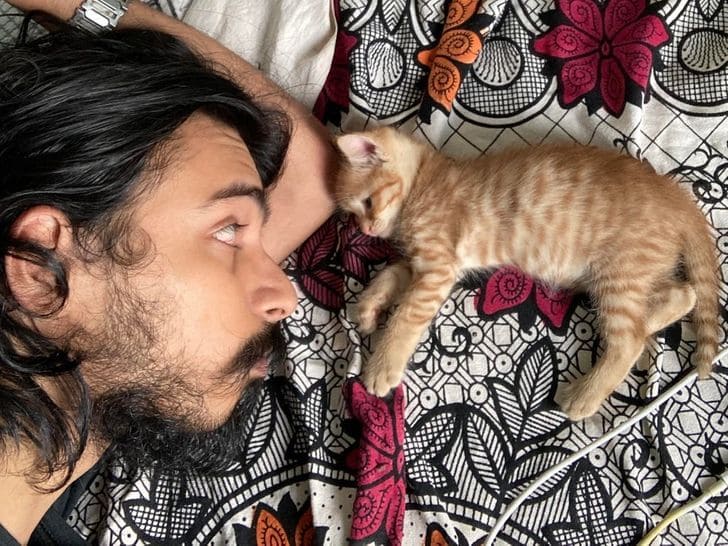 Aniamsla re a massive source of comfort. Stress literally runs away when you have a pet around. So who’s the superhero here?

16. A 10-year-old gentleman who is its owner’s first adoption. You are in for lots of fun, hooman! 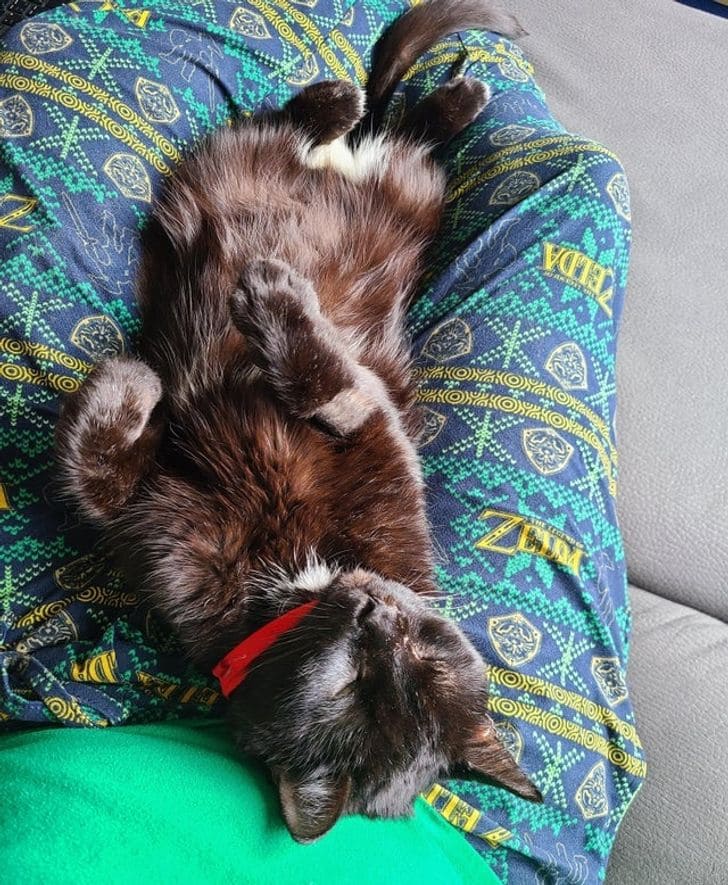 Such an adorable floof! Can’t believe he was once an abandoned animal.

17. These brothers had to wait for 9 frikkin years to get adopted. Better late than never, their superhero finally arrived. 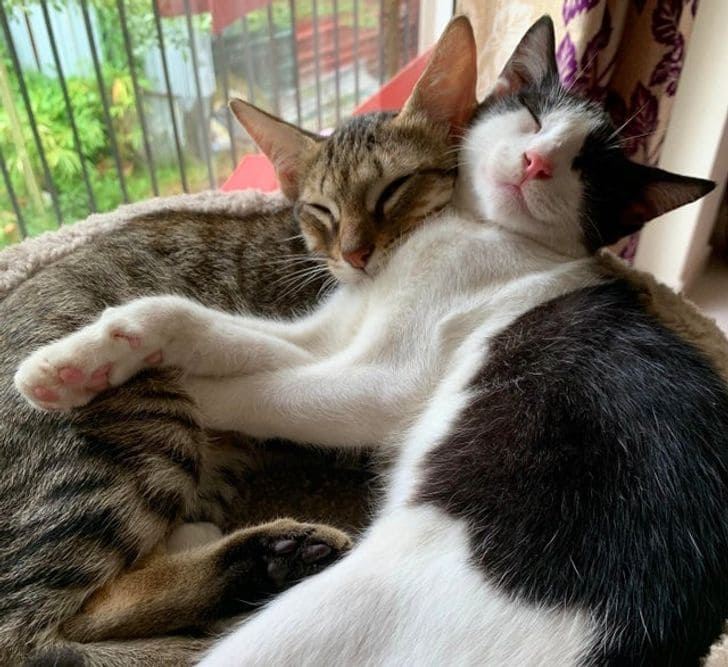 18. This brave boy spent 2 whole years in the shelter. He finally met his superhero and is now at his forever home. 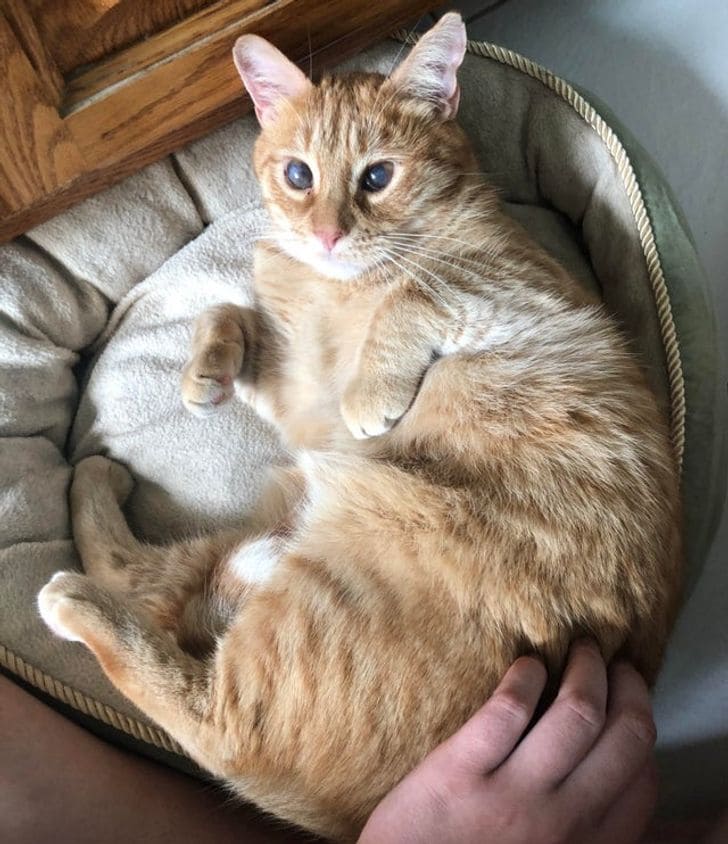 See this is the thing that keeps my hopes high. Animals do feel low but there is always that tiny bit of hope that just won’t die. A hope that someday things will become okay. It is this cat’s willpower that brought this superhero to him.

19. This amazing dog adopted a stray cat in the neighborhood and forced its owners to keep him. 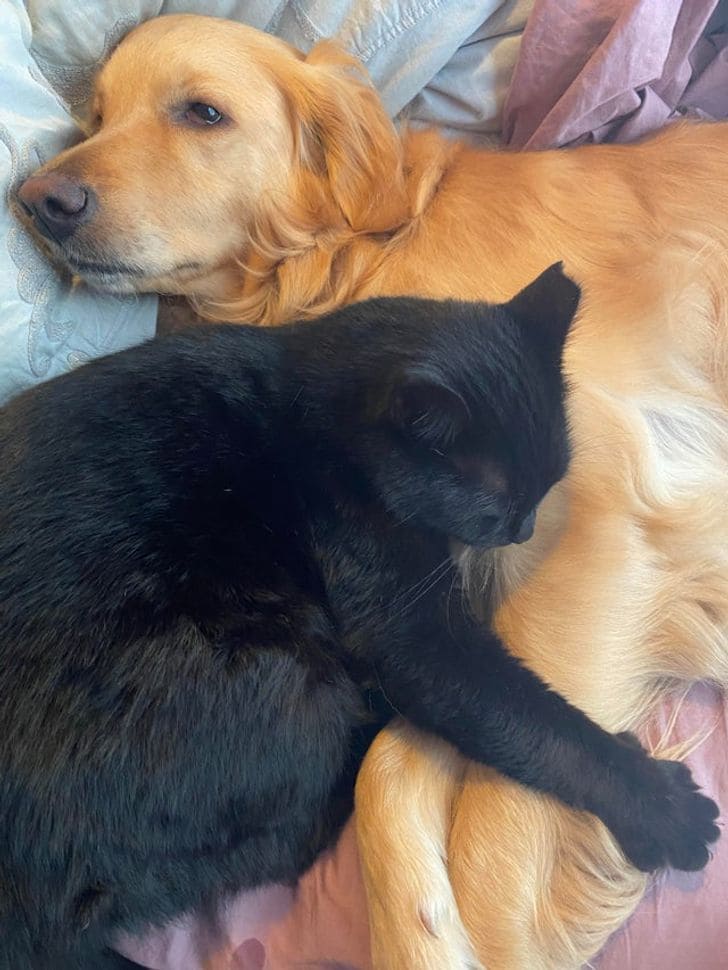 Okay, this has my tears. What did we do to deserve dogs? They are perfect and I am very grateful for their existence. A superdog!

20. This is Charlie! He has bad hearing but that does not at all stop him from being an absolute love bug! 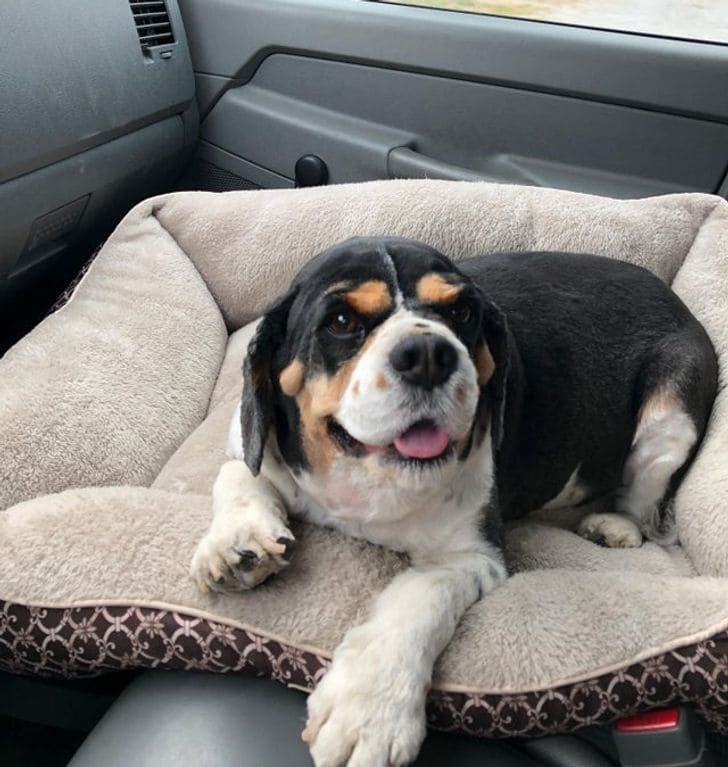 I don’t like using the word disability but ain’t no obstacle stopping this doggo from living its best life.

More super beings like this and the word “poor” associated with animals will no longer exist. It should always be rich animals. Rich with love and happiness!

Don’t forget to share your opinions in the comments section down below. Stay tuned for more goodness!