Managing finances can be hectic in today’s age.

In the current times, managing your finances can be very difficult especially with Covid existing as a massive hurdle in the background. Due to not having the option to operate like most companies used to, earning and maintaining your job in a time like this can be literally hell. Couples or people living together really need to manage their finances as a team. It can literally make or break their relationship. Sure, helping out your significant other is a sign of common human decency. But if one person is extremely irresponsible and spends all the extra money that the other person earned for their own personal expenses, that can lead to both of them going through arguments and eventually causing a lot of damage. We always need to be considerate about the other person too.

Redditor throwRatiredafwife shared her side of the story in an AITA session on Reddit. She asked the Reddit community whether she was the bad person for getting involved in an argument with her husband of 4 years when he spent all of her bonus money on a gaming setup, a chair, and a mouse. Inevitably, they both got into an argument and that led to a fight between the two which resulted in him storming out of the house and staying over at his parents. Scroll down below to read the full details of the story:

She asked the Reddit community to give their insights on this entire scenario.

She was working full time and took care of both of their expenses. In the meanwhile, he was looking for a job. 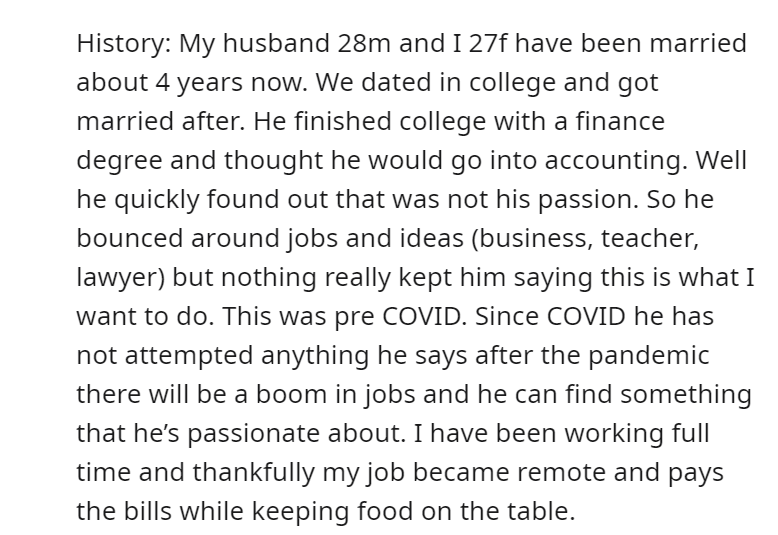 He called her unsupportive when he spent all of her bonus money on a gaming setup. 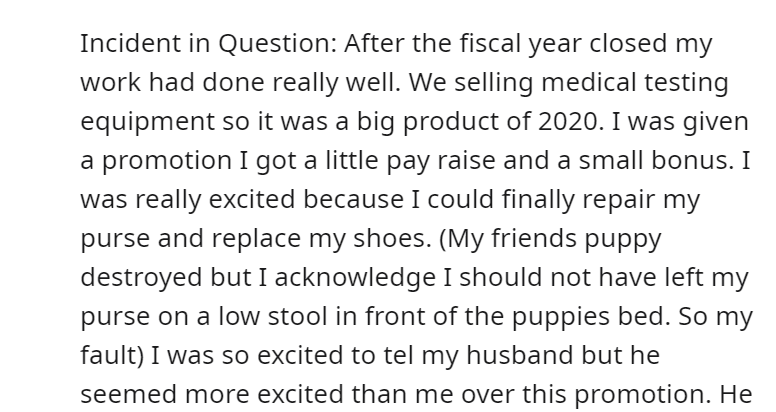 They both got into an argument and later had a fight. She called him wrong for spending all her bonus money, he kept calling her unsupportive. 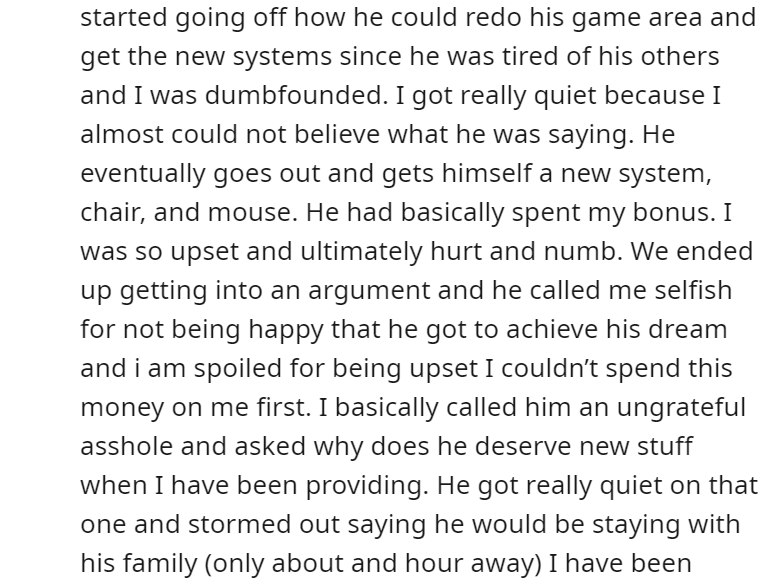 People started attacking her and called her things. Her husband tried to settle this down but she didn’t respond. 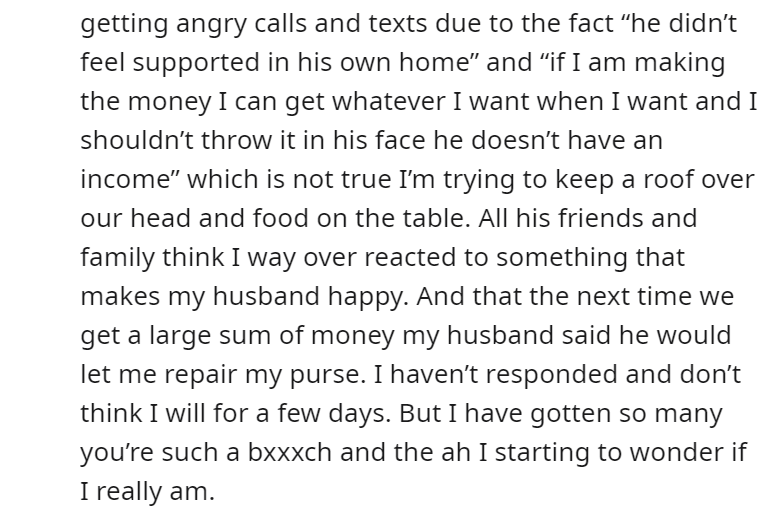 She gave her summary regarding the whole incident.

I personally think that she is not wrong here. Her husband should’ve asked her if he needed to spend the money and that was a large sum. She was the one working and providing for both of them, and that can be relatively difficult. Even if this was the opposite scenario, any person who would’ve spent someone’s bonus on something really expensive without even bothering to ask them is selfish. Maybe they could’ve gotten just the gaming system and she could’ve gotten her bag fixed.

This is what some of the Redditors had to say.

The Redditor questioned what her husband thinks the ”union” in marriage stands for. 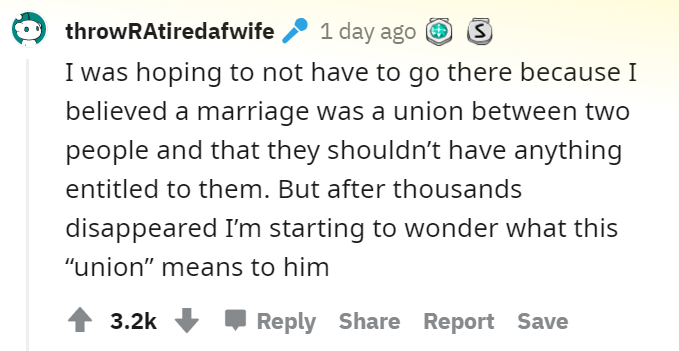 This person bought a car with their bonus money with her husband’s help. 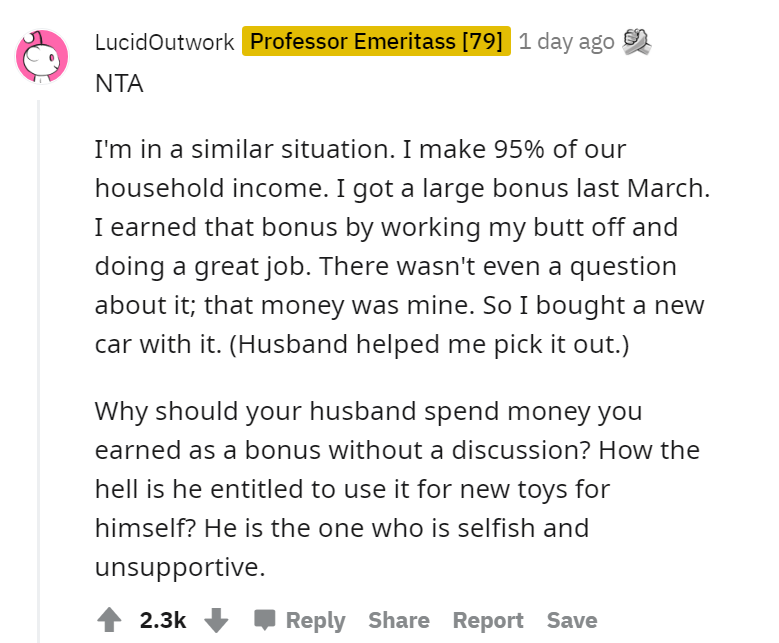 The Redditors asked her to dump him if he doesn’t even provide the bare minimum in this marriage. 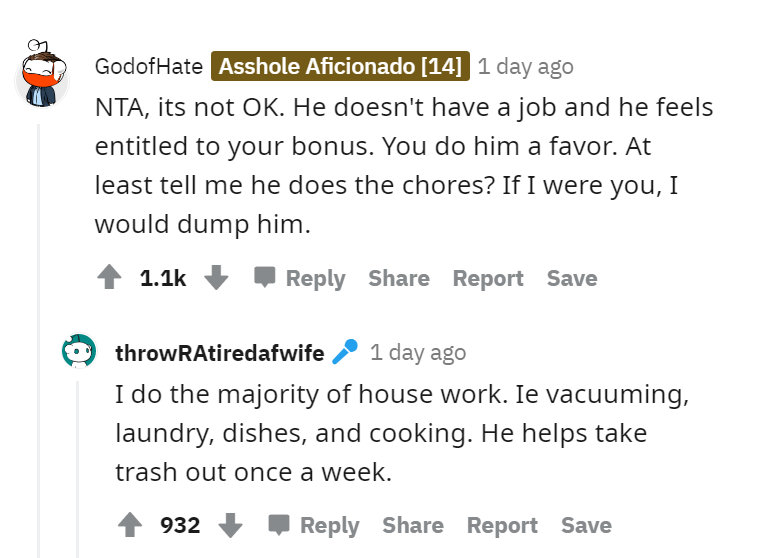 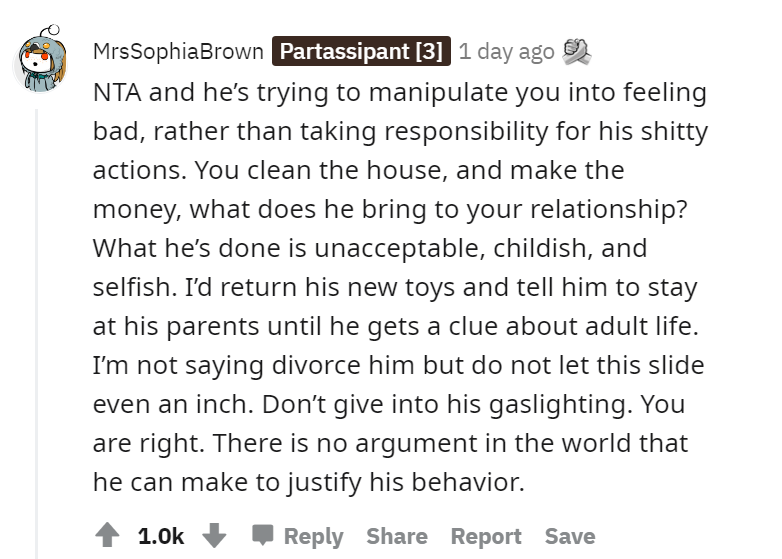 What are your thoughts on this? Who do you think gets the blame for over-spending? Let us know in the comment section below.