For some reason entitlement related issues are drastically increasing among people. We’re living in 2021—a time that people once thought would be free of cheap and pathetic mindsets, but sadly instead of progressing we’re going backwards. It’s as if with time people have become less considerate and more insensitive. Everyone’s just trying to get the most out of their lives even if it’s costing someone else their peace. It’s like people have grown so fond of an indolent lifestyle that they would rather deprive someone else of their right than to work hard for it themselves.

Then again, not everybody is the same and so we shouldn’t exactly generalize or judge people. However, it doesn’t mean that we ignore the ills of our society and do nothing to stop it. Condemning what’s wrong and advocating for the right is the least we can do to help build this world into a better place to live. But before we can do that we must have a clear sense of right and wrong. If we live in confusion and let people deceive us, it’ll be no good. So, it’s best to ask for help when in doubt and be sure. Much like how this guy below turned to Reddit for help after the whole neighborhood started hating him for not letting kids play on his lawn.

Read his story below and decide whether or not his decision was valid.

It all began when he left his small apartment for a place with ample space. 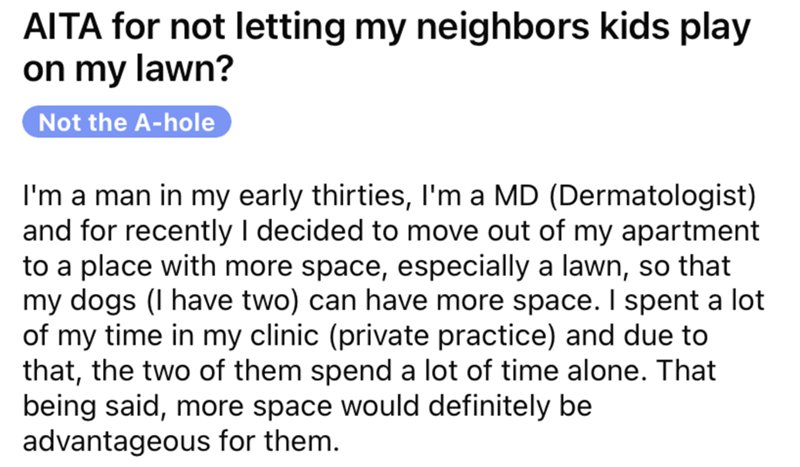 The sole purpose was that so his dogs could be happy. 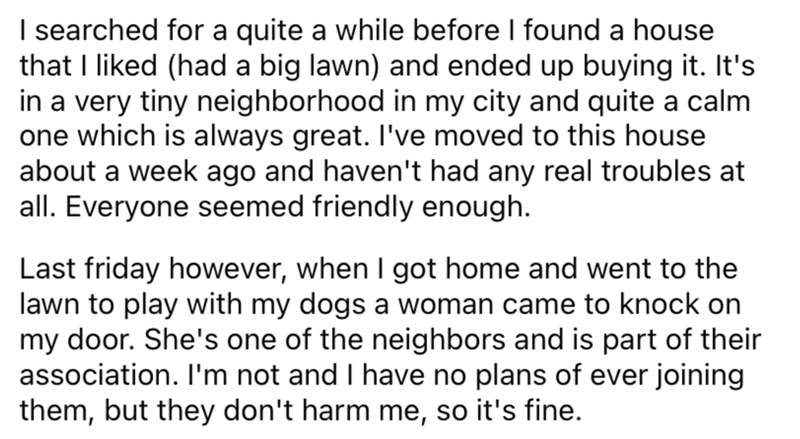 The neighborhood was apparently a nice and decent place to live…or was it?

She not only had the audacity to tell him to keep his dogs inside, but also made it seem like it was okay for the kids to play on his lawn WITHOUT permission. 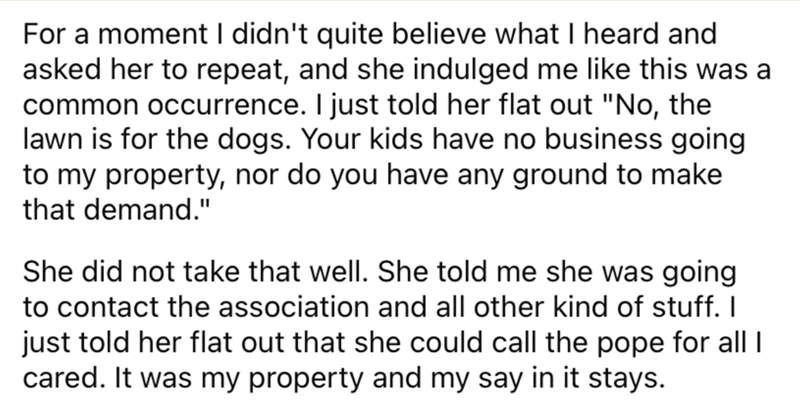 Now, any sane person in his position would have reacted the same way he did. But apparently the laws of that particular neighborhood were different than the rest of the world.

So, a man who lawfully owns a house should not only submit to the wishes of his neighbors on how he should live but should also be okay to let others trespass and possibly damage his property? That too, in his absence. Now, who in their right mind would ever be okay with something as absurd as this? It doesn’t even have to be a debate it’s downright stupid. If anything, we can say that maybe, just maybe the OP was a bit too harsh for not letting kids play but it’s his choice to make. And it makes sense if he refused because letting anybody inside his FENCED lawn violates privacy.

What’s your take on the matter?

Also, for more absurdity check out our previous posts: Scammer Who Planned For A Free Vacation, Ends Up Crying And Telling The Truth and Pregnant Woman Hates Her Sister’s Dog, Gets Kicked Out