It is as if they admit that they made a mistake, they will burst into flames. I mean don’t get me wrong, I understand that we can all make such mistakes. I have been in situations before where I have mistaken another customer who is wearing similar customers to the store workers with an employee. It is completely understandable to do that. However, what is not understandable is acting like you didn’t know any better even when the other person repeatedly told you.

I have never understood why Karens think that everybody is lying. Does anyone really have the time to lie so much when they just want to get on with their life? I also realize that some people are lazy and don’t do the work they are supposed but it is the store manager’s job to get them in line, not the customers. But Karens like to act like they are the supervisors in the situation. The following is one such story.

So just scroll below to take a look for yourself.

We get a bit of information about what the uniform looked like in the first place. 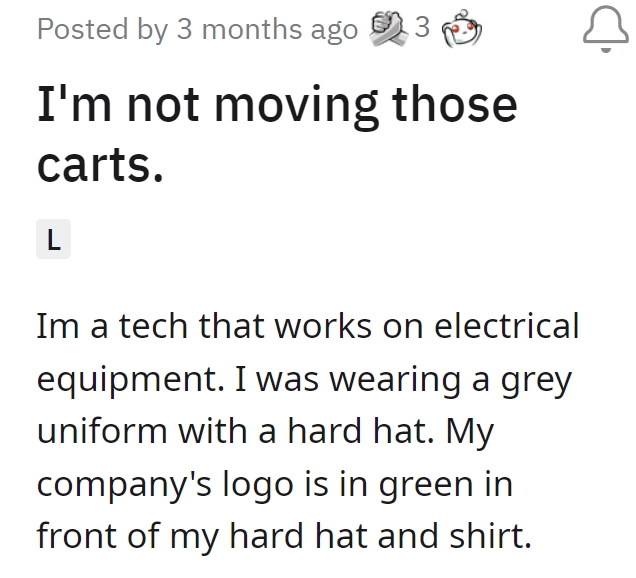 So this person was peacefully eating their burrito outside the store.

However, this woman just couldn’t leave this person alone even though they weren’t even in the store. 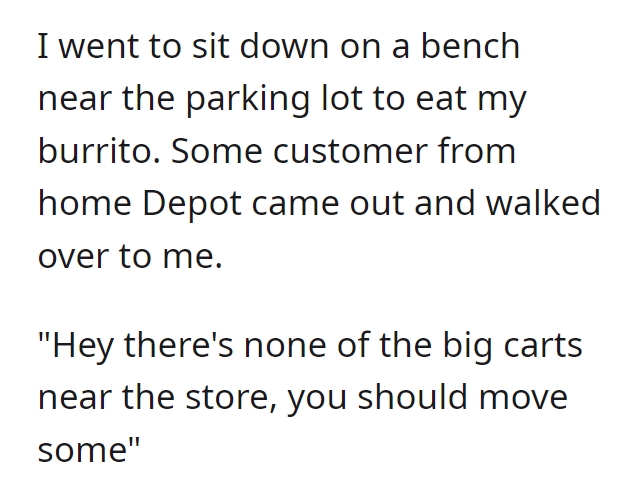 They realized what was happening so they set her straight but she wasn’t having any of it. 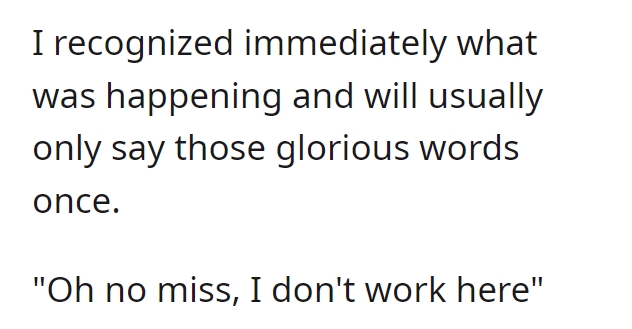 They try to explain it to her that they don’t work here but she doesn’t budge. 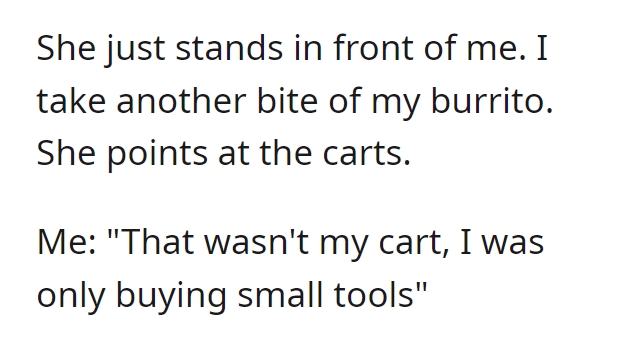 She keeps pestering them. 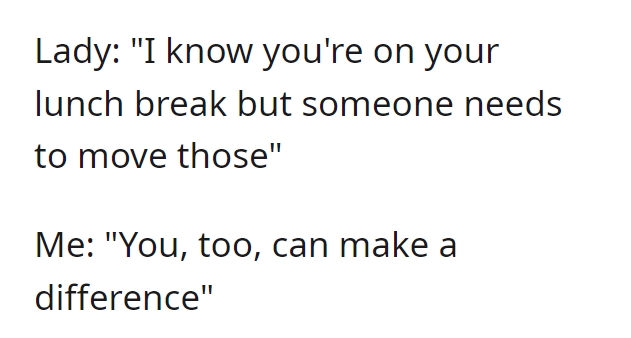 Finally, she decides to walk away and you would think that was the end of it but it is not. 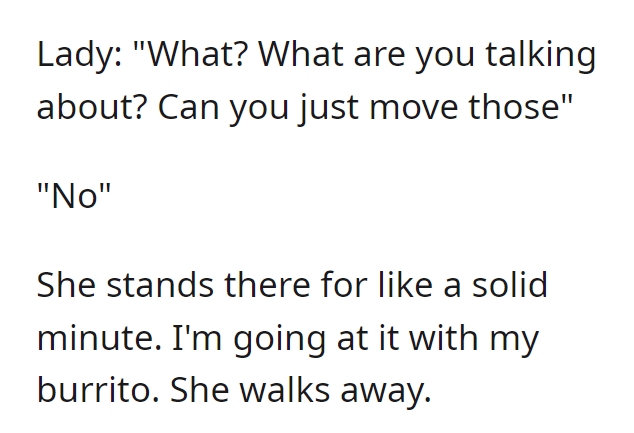 She came back out with a manager presumably to lay into the customer. 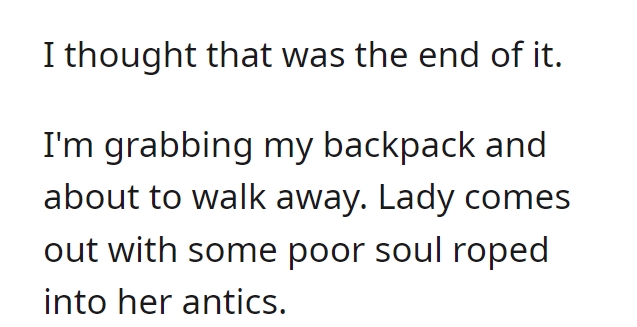 As you can probably imagine, the manager just tells her what we already know. 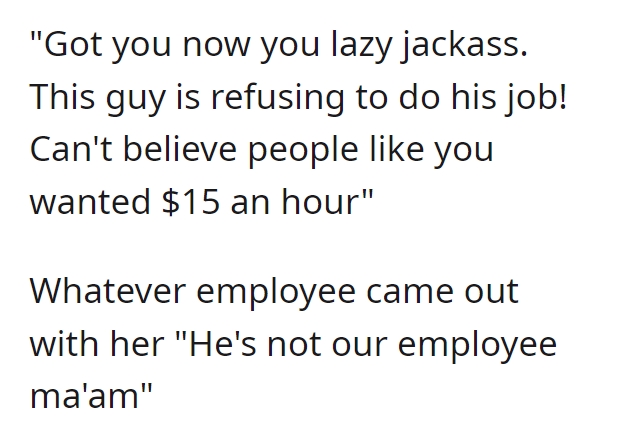 And she has the audacity to end it with a ‘They should have told me.’ 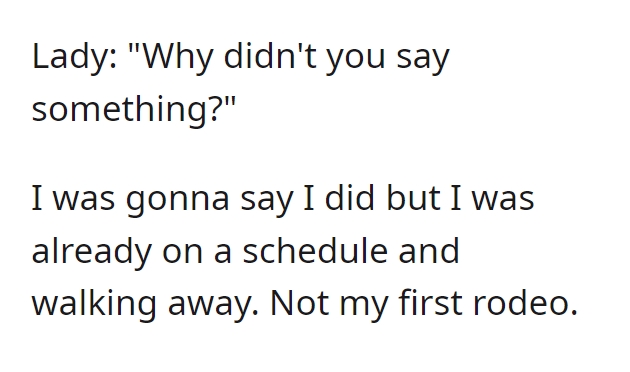 I am honestly surprised that this person remained so calm throughout the whole exchange. if it was me, I probably would have called her out for being two-faced. Even if the person was an employee, they were supposed to be on a lunch break so I do not understand what wasn’t going through her thick head. And then she even took it a step further and complained about how retail workers want better pay. I don’t even know what that has to do with anything in this situation but she just had to point that out. People like her are liars and lazy so she thinks everyone is like her too. That is the only explanation for her behavior.

The best comment I have seen in a while. 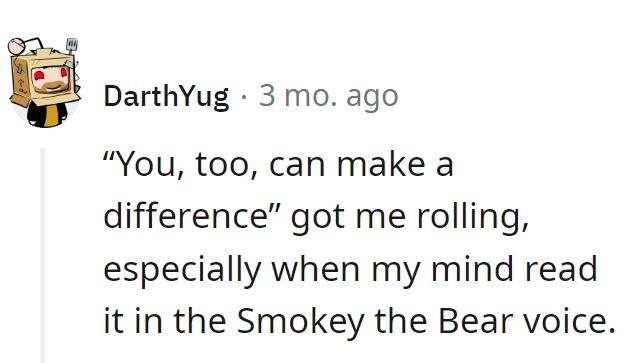 But Karens don’t think that employees are humans. 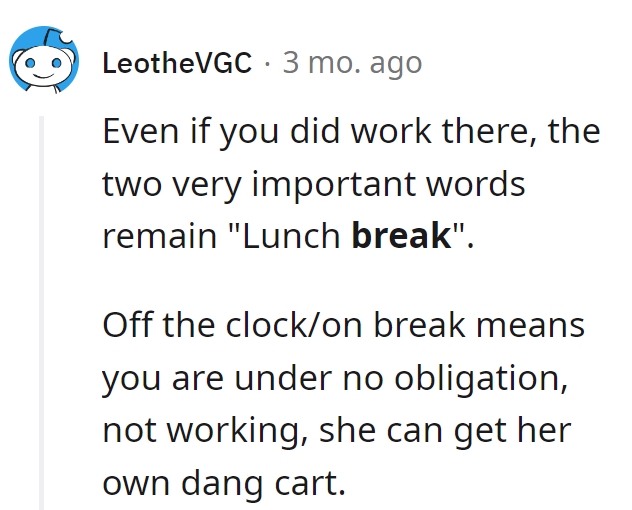 What are your thoughts on this story? Have you ever been in a similar situation? If so, how did you deal with it? Did you call out the Karen for being rude or did you simply just leave? Let us know your experience dealing with people like these in the comments below. And don’t forget to share this article so others can join in with their personal stories as well.