Some people can get everything by yelling loud enough.

I would like to think being nice is the way to go. But time and time again we see people like these get ahead just because they yell loud enough. I mean there is a reason Karen’s are so prevalent anywhere you look. Being rude to employees and making up false things gets you a coupon and other stuff for free. Granted this is becoming less and less common as people are learning about these sorts of people. However, there are still many Karen’s in the wild.

That is why today we have once such story. A woman who can’t take no for an answer and thinks making up things will get everyone to listen to her. Not only is she fine calling herself an Orangutan wh*re, but she also tried to get a person fired who didn’t even work at that store in the first place. So scroll on below and take a look for yourself.

We get a little bit of background on why these friends were there in the first place. 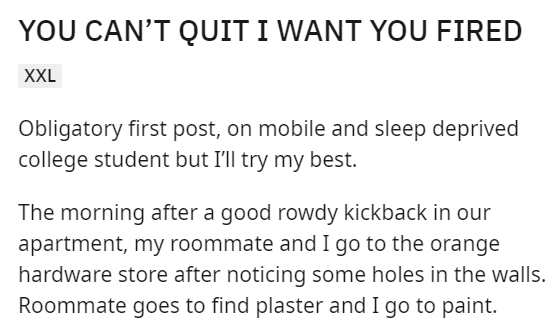 Honestly I would have done the same. It is just more satisfying that way. 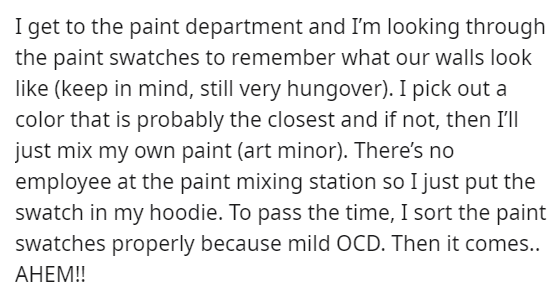 Being Hungover is no joke, and you feel like all of your IQ points have somehow vanished. 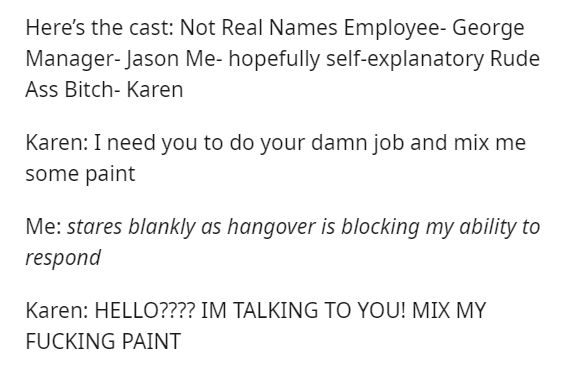 I would not recommend telling a Karen who thinks you are an employee that you are hungover. 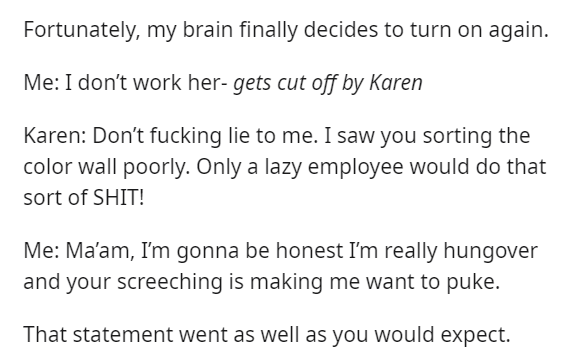 Unsurprisingly, more screeching followed the initial storm, and then she walked off. 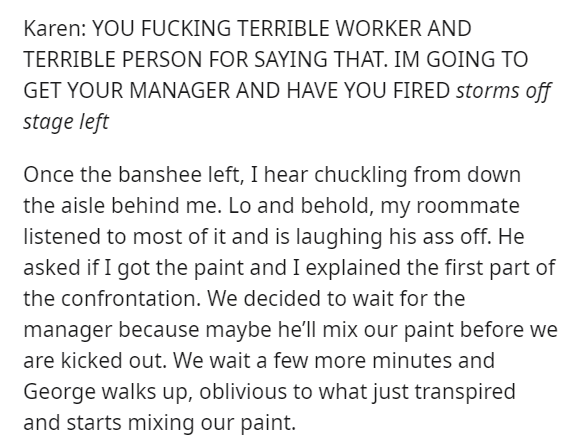 I get being angry but how did she come with such a creative insult for herself? 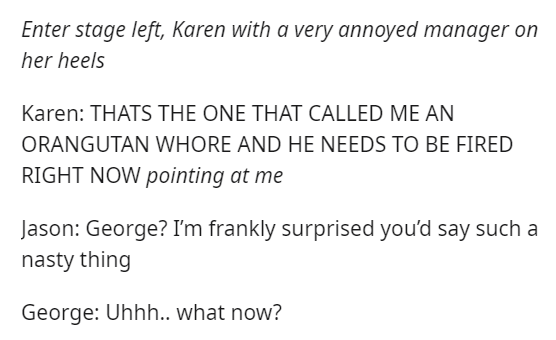 That might be one of the dumbest thing I have veer heard in my life. 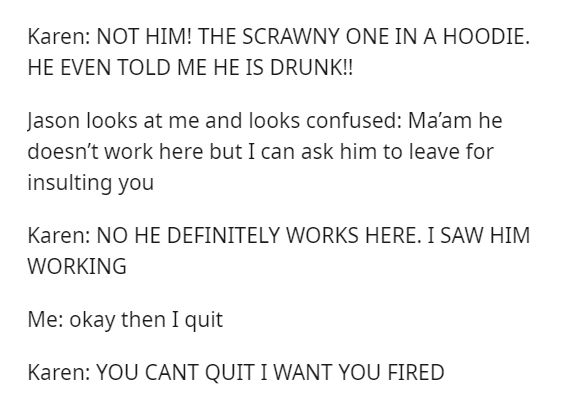 But things didn’t end there as they had to know what was going to happen next. 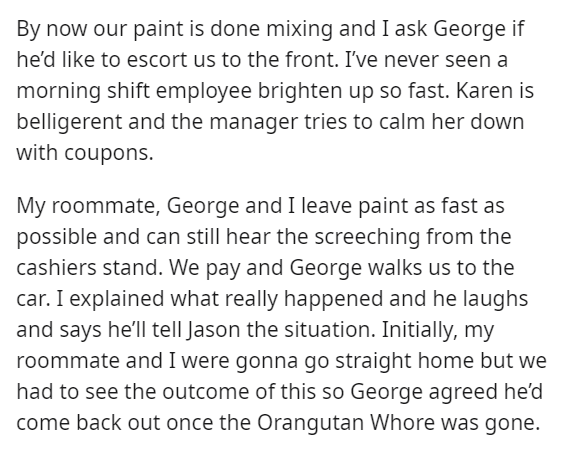 And apparently the Karen didn’t give up either. She just had to come back for round two. 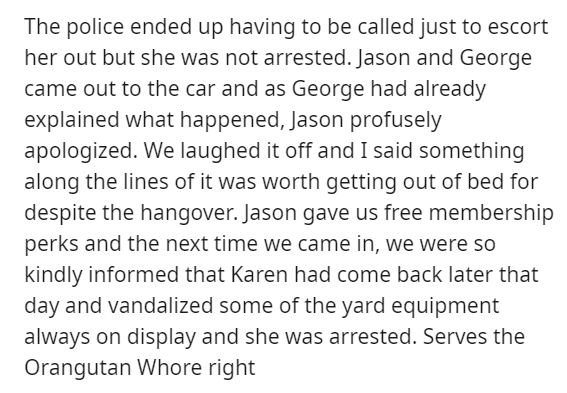 This is especially strange because the employees at this hardware store wear bright orange aprons that clearly show that they work there. Also, as someone who works at said orange store, what membership perks were they offering you? I have never heard of that. –The-Upvote 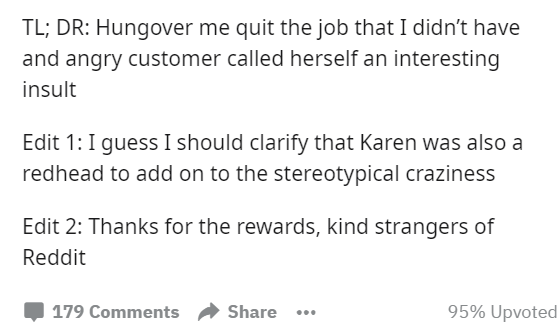 It is a nickname that really suits her to be honest, and I haven’t even seen her. 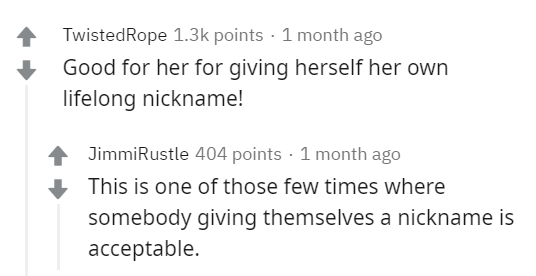 Sometimes you just have to act like this to get what you rightfully deserve. 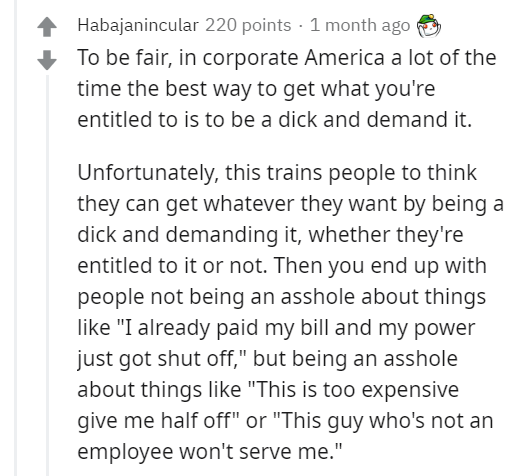 There are some times acting like a Karen isn’t totally unjustified. 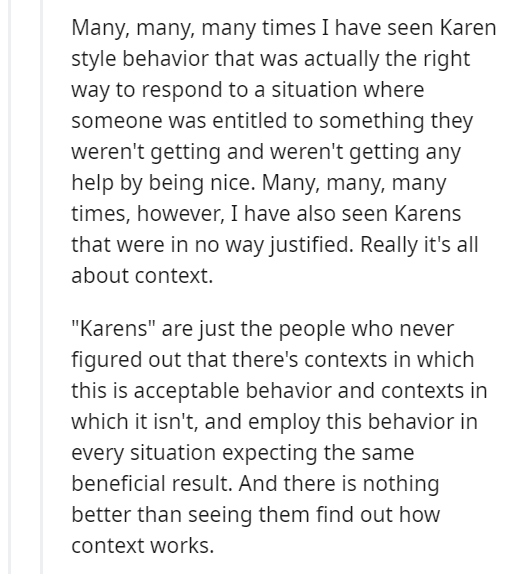 This is not normal in most countries outside the USA. I’m Swedish, and I’ve been in the service industry since I started working when I was 14, and I’m now 28. I’ve never dealt with a customer that started vandalizing sh*t and demanding I got fired for something.

Sure I’ve had my fair share of cookoos but to this extent? Never.

I think culture is a big part of it. Our companies value its staff. The job I have now I deal with customers mostly on the phone. My boss encourages me and my team to end calls that are getting out of hand. We are under no obligation to be treated poorly by customers.

So instead of risking my employment I’m applauded for not tolerating being berated at my job. –IFistedTux

This is why we should stand up for ourselves when something like this happens to us.

Comment down below and let us know what you would have done in this situation.