Having a child is truly a blessing.

If you have or are able to have a child, you are very lucky. Not everyone can say that for themselves. Seeing the cute little mixture of yourself and the person you love is really a beautiful experience. Giving birth, naming the baby, raising them until they are adults, it is a long journey. It is a rollercoaster ride that people are grateful for experiencing. However, having a baby is a huge responsibility and one should seriously assess themselves before having one. If you are financially stable and mentally mature, then you are ready to have a baby.

However, some people can have children but still act like kids themselves. This woman on Reddit shared her experience of discussing baby names with her friend when her friend was pregnant. When the woman herself got pregnant, she decided to name her child one of the names that her friend liked, and now she is mad at her. Read the whole story below:

The woman decided to name her daughter “Ada.” Her friend also liked that name. 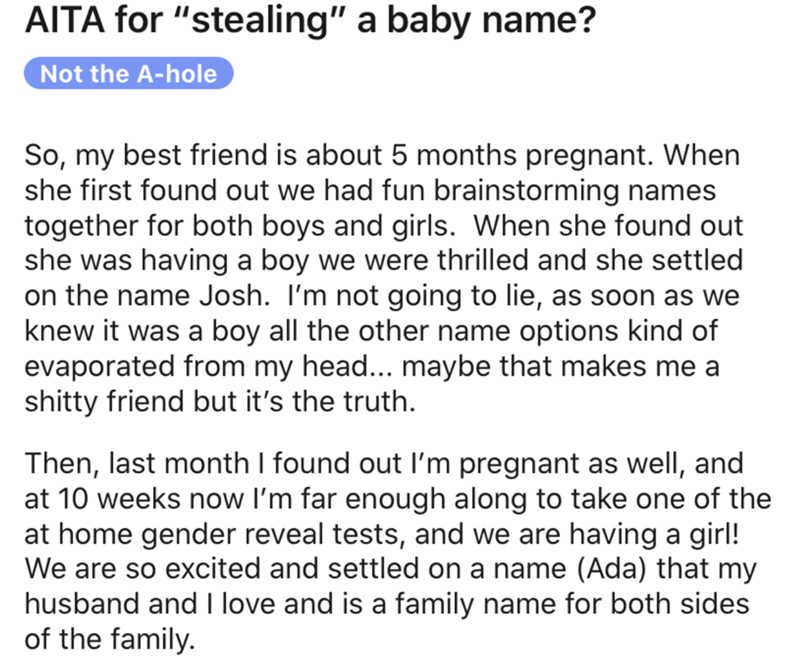 Her friend was extremely upset because of this, but was the woman really wrong for doing so? 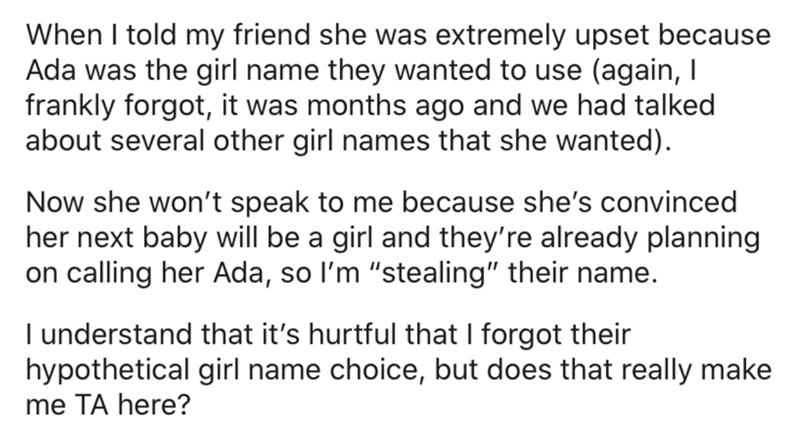 Picking a baby name is a very personal thing. You name your child something that means something to you. So it is understandable that the friend was emotional when she found out the woman is naming her daughter “Ada.” However, just because you like a name, does not mean you own it. You can’t stop other people from naming their children the same names because it is not your legal property.

This is what other Redditors had to say about it:

The majority of them came to the conclusion that the woman was not wrong for doing so. 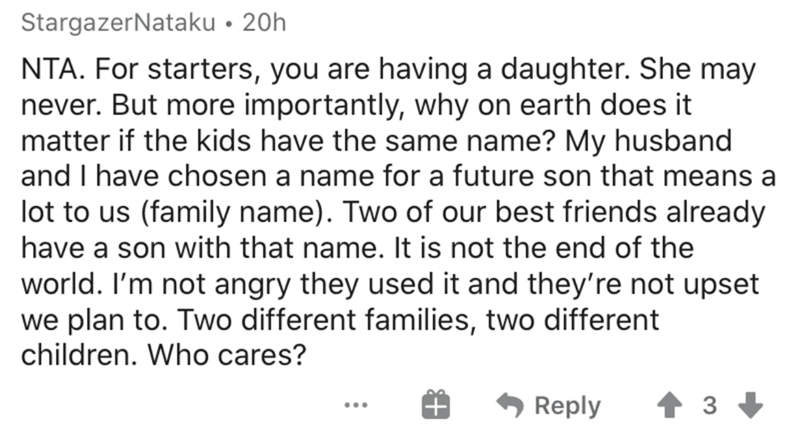 What guarantee does her friend have that she will have a daughter in the future?

The friend needs to grow up because this is very childish. 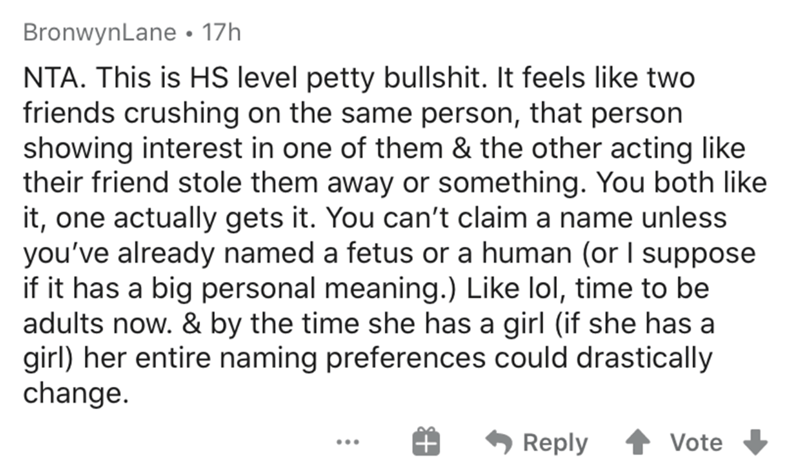 Why would anyone name their baby after themselves? 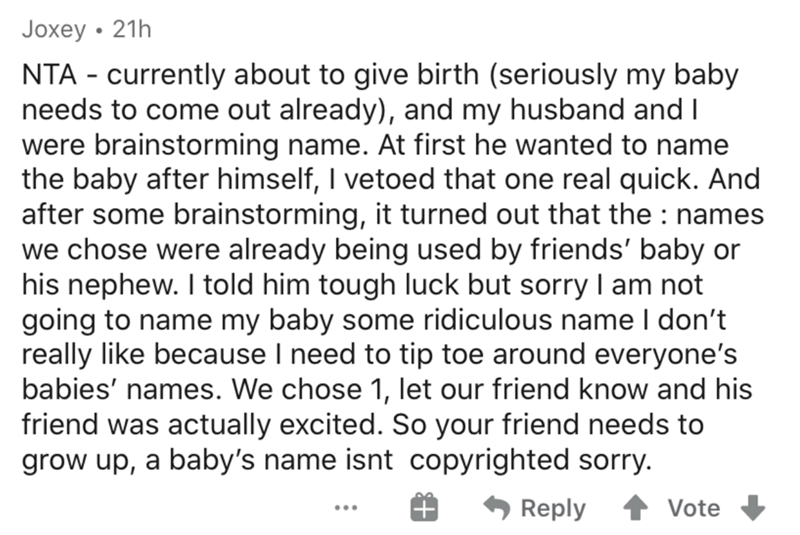 She does not have logic to back up her argument.

A lot of people have similar names. 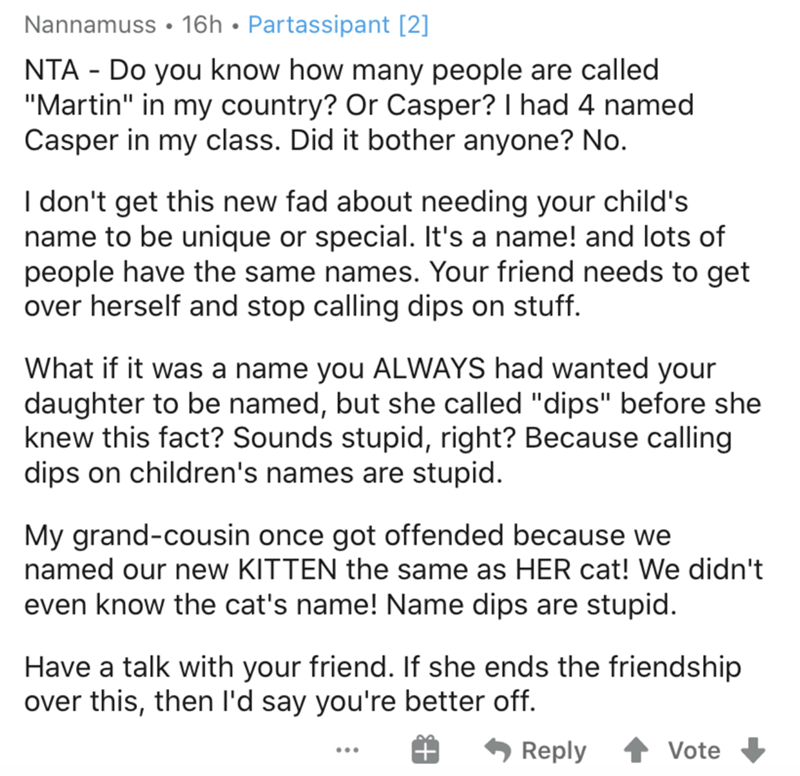 This person tried explaining it from the friend’s point of view. 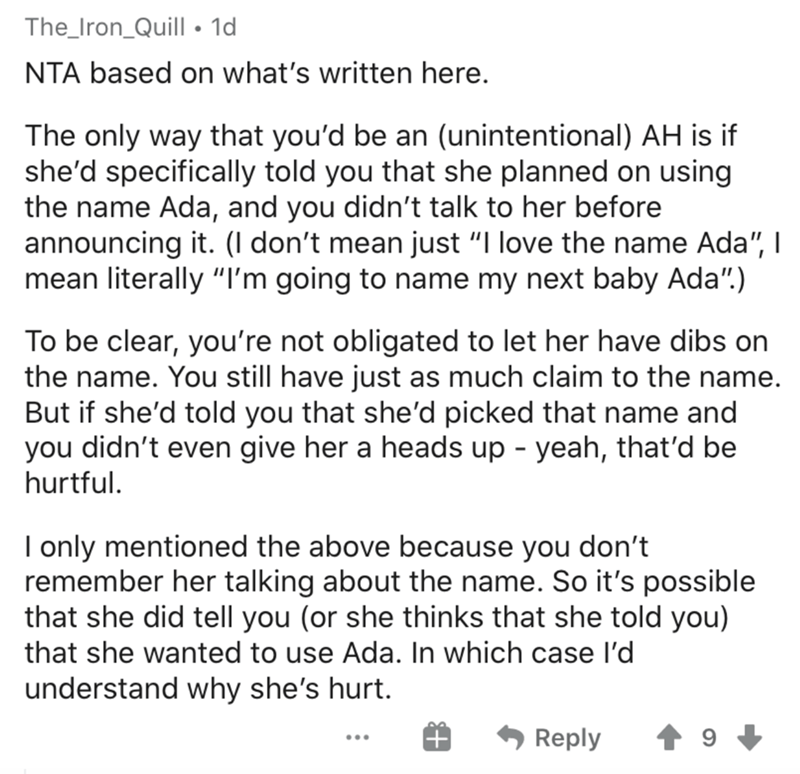 This is not something a real friend would fight over. 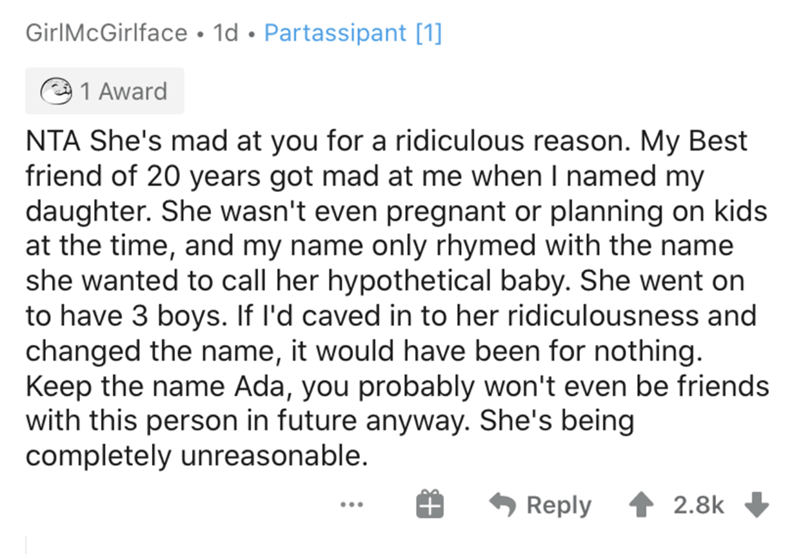 You can’t claim a name.

There are so many other beautiful names to pick from.

Ada being a family name makes more sense for the woman to name her child than her friend.

What if she has all boys?

Some people sympathised with the woman’s friend. 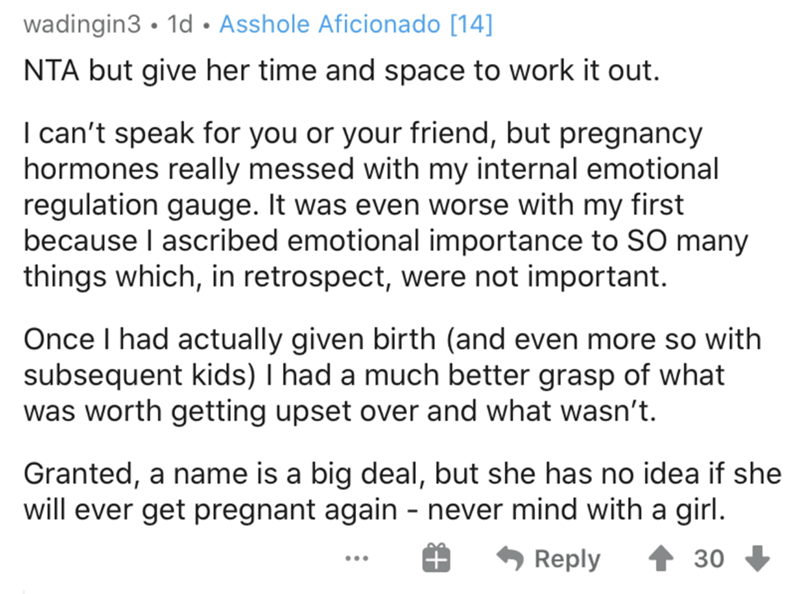 So, most of them decided what the woman did was completely okay.

And that her friend is just creating drama over nothing.

There are going to be a lot of Adas in the new generation.

This person thought the woman is responsible for this conflict too. 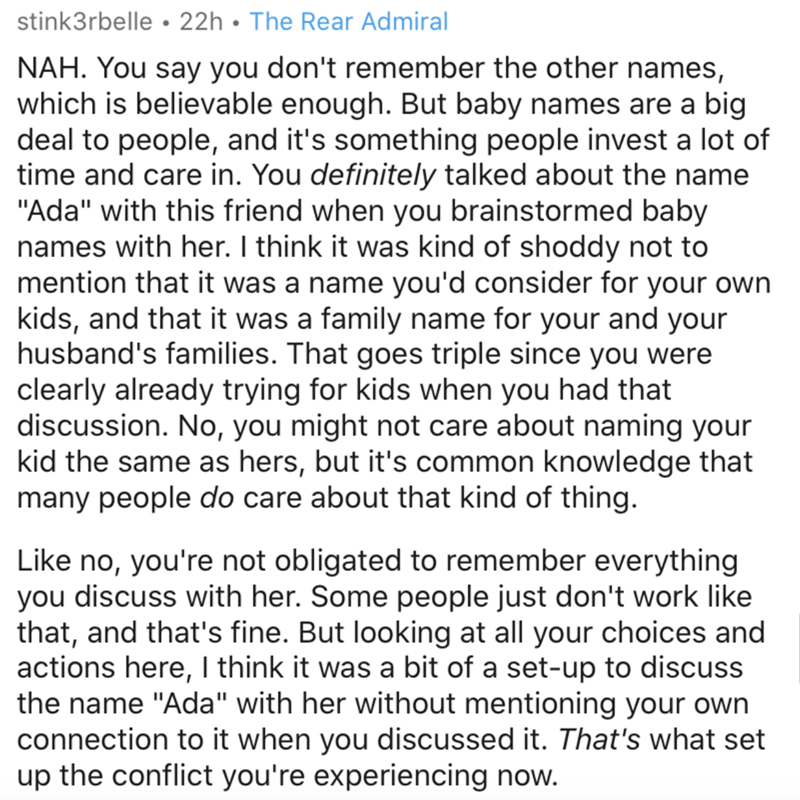 I would love to have matching kid names with my best friend.

Why all the jealousy? 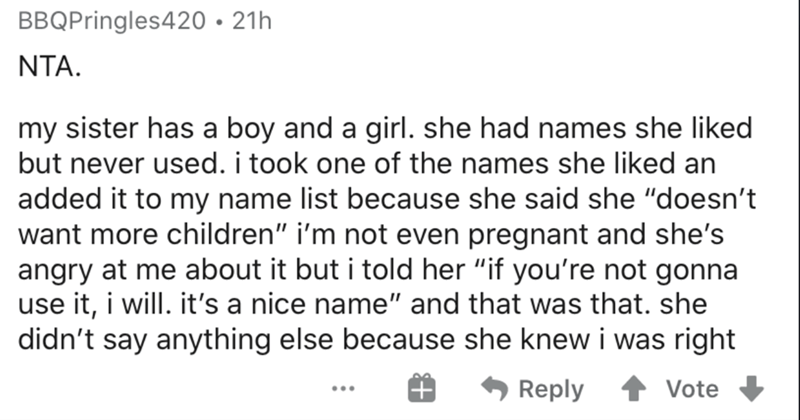 Just continue as you planned.

Her friend should keep her name choices to herself if she is that possessive about them.

This is actually very silly. 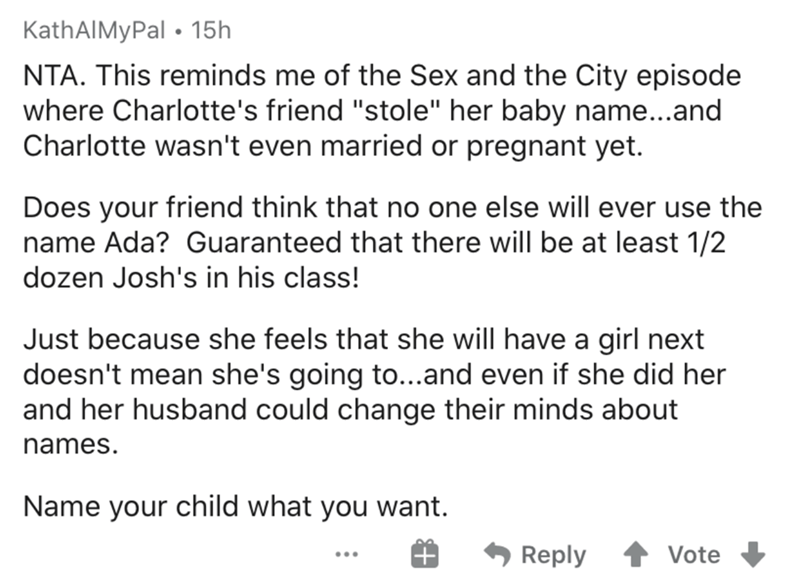 What is your opinion on this? Let us know your thoughts in the comments below!