I never thought I would say that sentence in my life and yet here we are. Because you see, I have read countless books but apparently, I wasn’t reading the right ones since I didn’t come across these horrendous representations of women. Do you know how people usually clamor for well-written characters with clear motivations and dislikes? Well, it seems that only applies to guys since women can be easily described by how they look.

I am not saying writing about physical appearance in a book is wrong since everyone likes to provide some sort of idea of what the character looks like, even me. But that doesn’t mean you have to give the size of their ‘assets’ or describe in the most weirdest way possible.

I don’t think I’ll be able to explain this even if I wanted to so just take a look for yourself by scrolling below.

#1 It always takes me a century to properly pee. 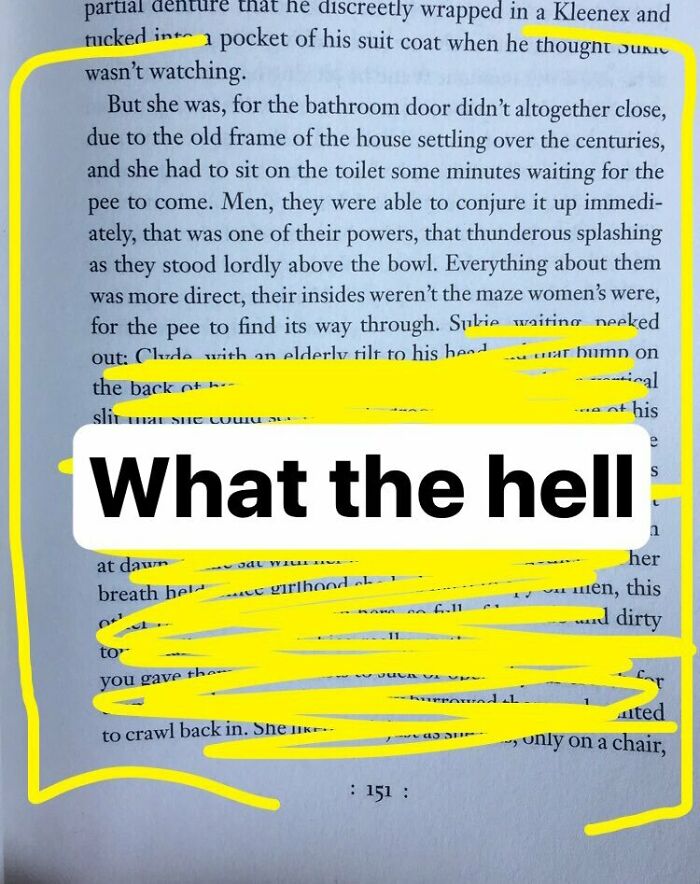 So many weird misogynistic stereotypes here. Does this person also believe our wombs detach, fly about our bodies, and make us crazy once a month? -Samantha Lomb

#2 This is why we don’t get pockets in our clothes.

#3 This is the standard measure for breasts? Apparently, I have been living my life the wrong way all this time. 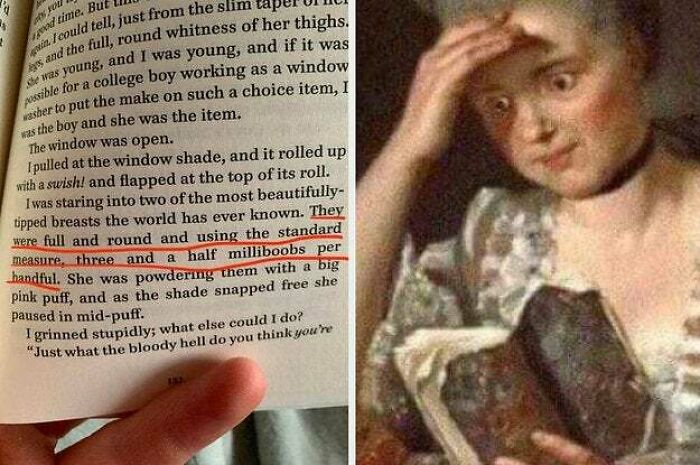 #4 I am totally fine with this. Let men handle pregnancy for once.

#5 Lots of people have stretch marks even without having a kid. 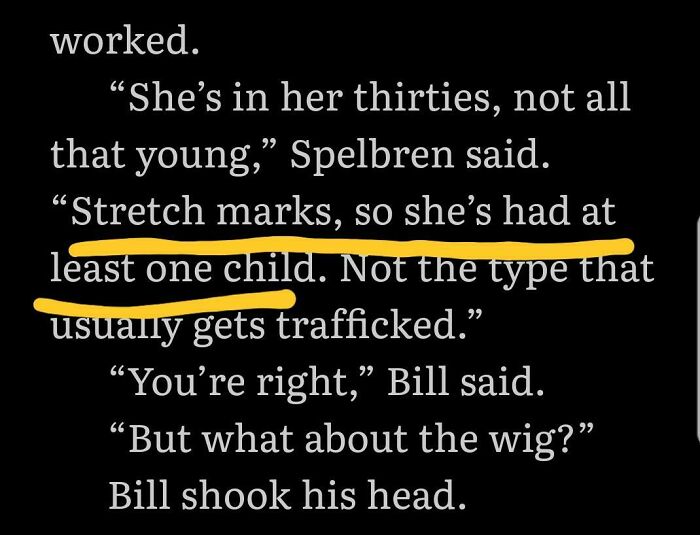 #6 I- What? Excuse me while I bang my head against a wall.

#7 Of course any woman who isn’t conventionally attractive always thinks of ending her life. 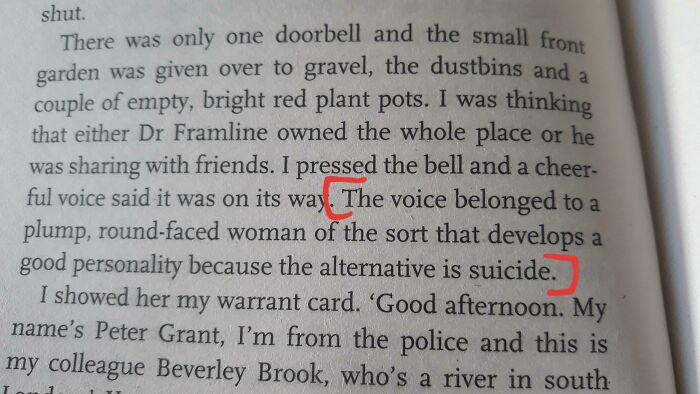 #8 I would love to see breasts that can smile.

#9 I don’t think this guy knows how everything works. 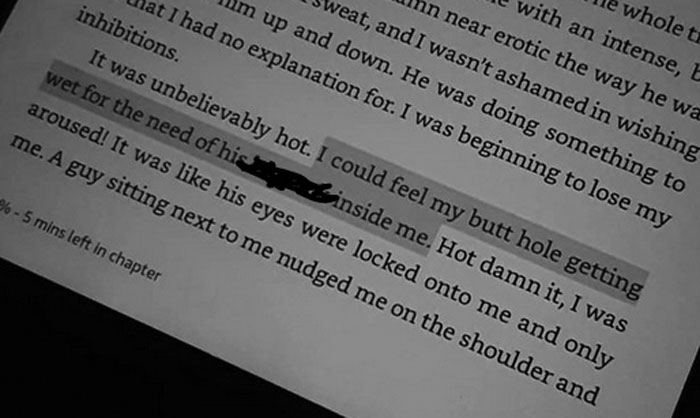 #10 I can’t believe I have to say this. Breasts don’t withdraw into themselves ever. 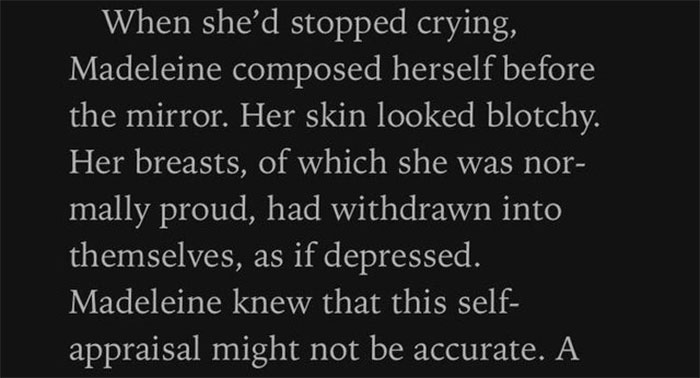 They don’t “withdraw” because they are a muscle and a rib cage underneath and they are just mounds of fat and milk-producing tissue. I feel like so many people here did not pay attention in health class.

How can they be so clueless about the female body? -Samantha Lomb

#11 It would be a great superpower at the least.

#12 Thirty-six years? She was practically by her grave already. 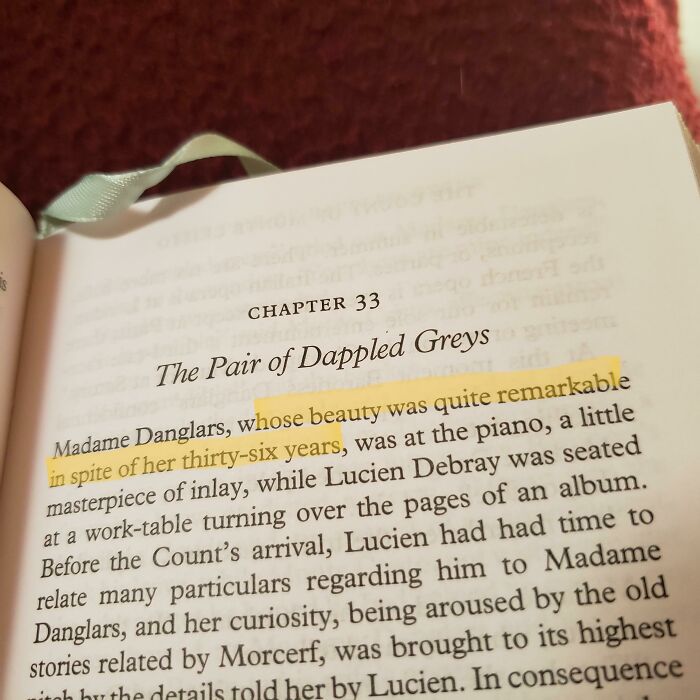 #13 I am too angry to even come up with a witty remark. 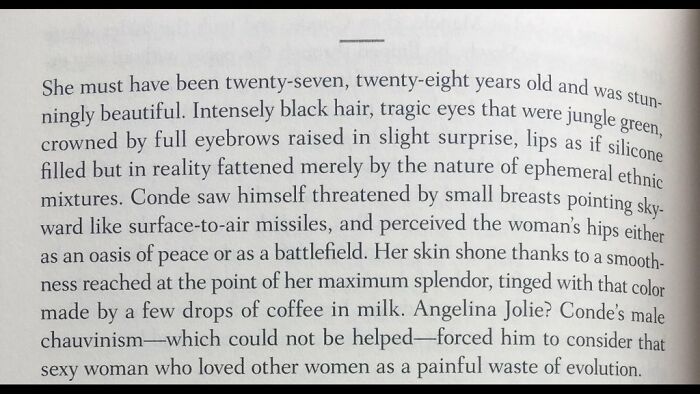 #15 Ignoring the other things, how long was he staring at her toes?

#16 I would love to see that actually.

#17 So what you are telling me is that she didn’t have a head?

#18 I have never described myself like that ever in my lifetime.

#19 So she just scooped someone else’s eyes into her sockets?

#20 This is the only way to know when you are scared. 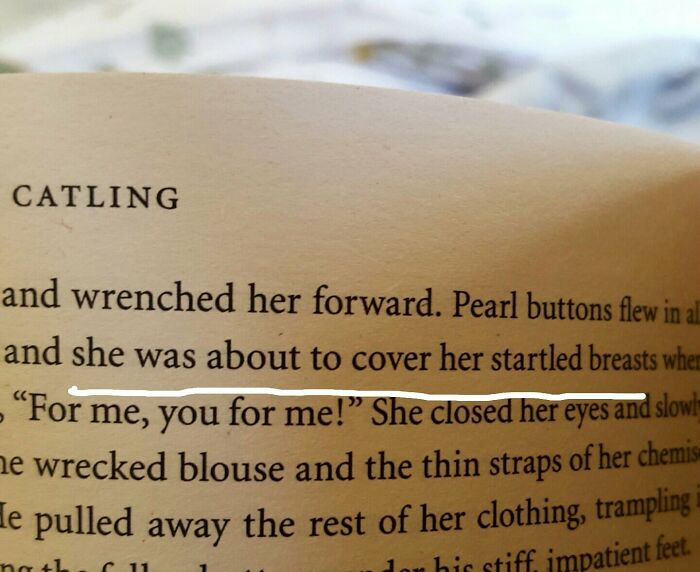 Working in advertising, I tend to be Very Online, and so taking my anger to Twitter seemed like a natural parallel.

I was familiar with the Men Writing Women subreddit but created a Twitter account in order to craft a consistent narrative and to build a community that wasn’t hidden behind anonymity. -Vondriska

#21 So she was basically like a barbie down there? Has this guy ever seen a barbie? 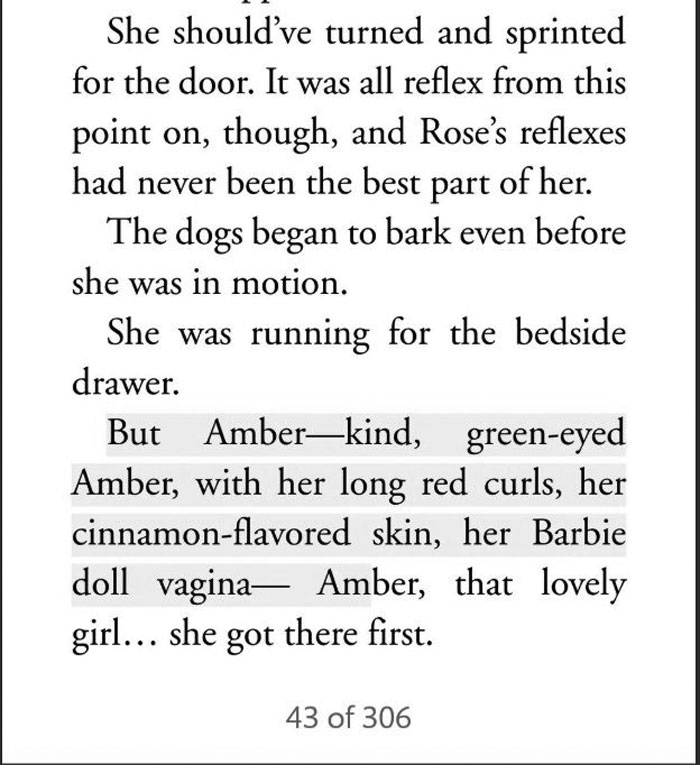 #22 A woman would never do this and secondly, pads do not get soaked with blood. 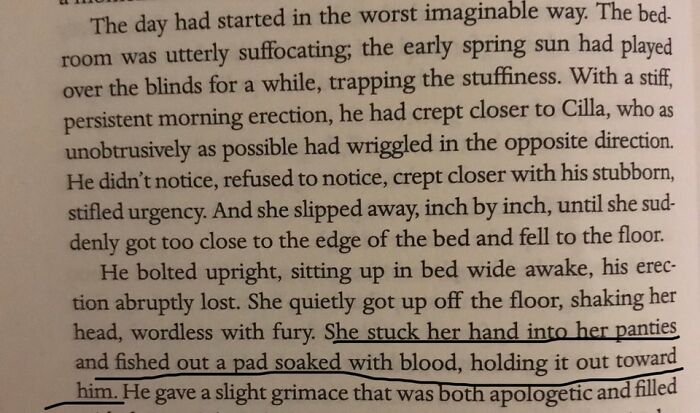 #23 Dry skin can be quite uncomfortable, I think he needs a good moisturizer. 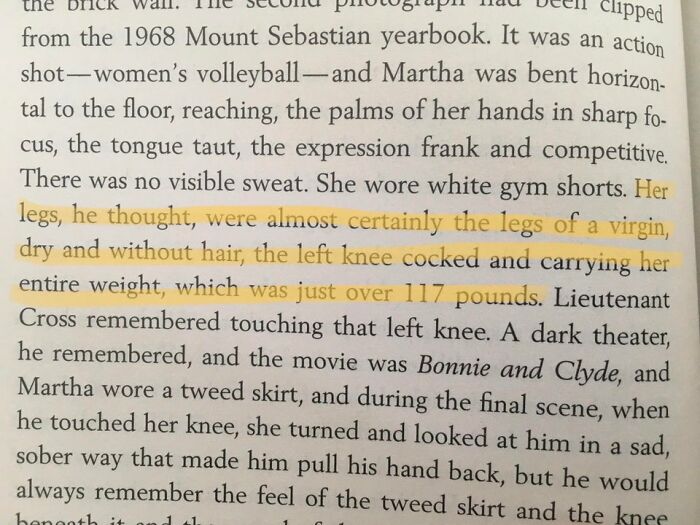 #24 Who needs a pillow when you’ve got breasts right?

#25 Who cares about a bikini wax? It isn’t a personality trait. 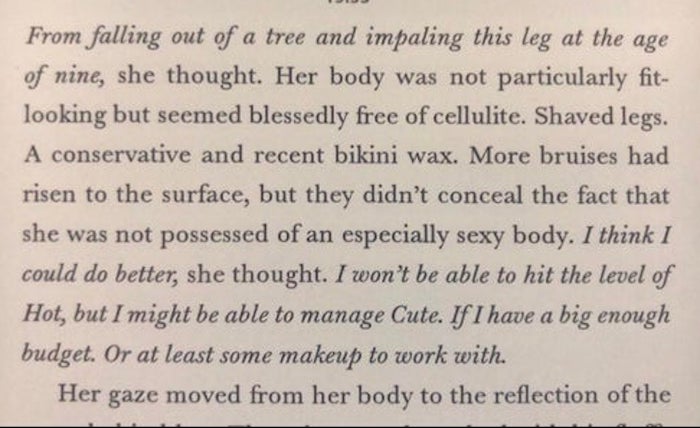 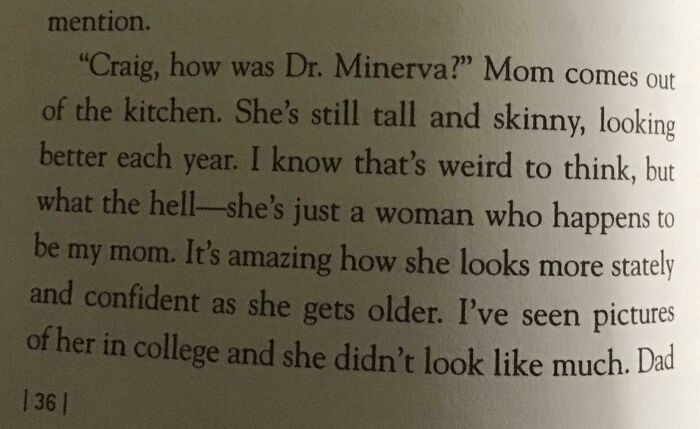 #27 Was she a robot charging herself up or something? 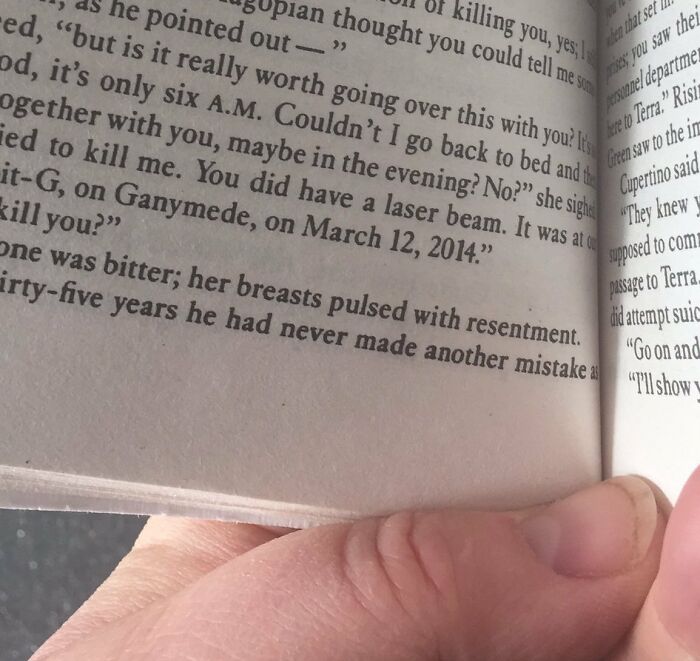 Pay attention to what you’re reading, and who you’re reading. You have to make sure your bookshelf isn’t made up of just men. Add in some spice—some female authors, some nonbinary authors, authors of color.

And lastly, just because you were assigned a book in high school, doesn’t mean it’s good! -Vondriska

#28 This isn’t doing any favors for the image of men either. 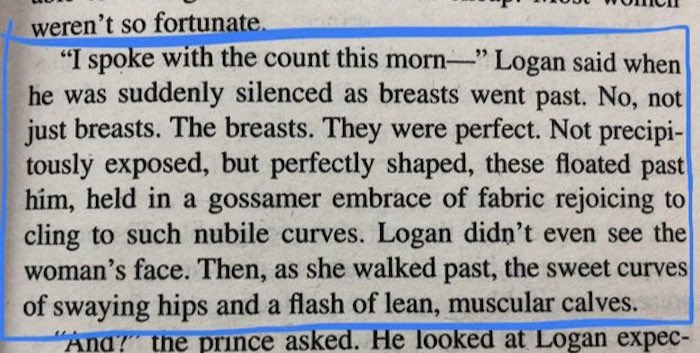 #29 I know he is describing a dead body but still…

What is the most egregious way you have seen a male author describing a woman? Comment down below and let us know.