A year ago, back in March, before the whole Covid thing happened, someone who goes by the username “Feminist Next Door” and has the @emrazz asked a poignant question to Twitter that went viral. There’s often a resounding “Not All Men!” whenever feminists make a comment painting men as a whole as something negative. Whether it’s saying men are aggressive, violent, and so on and so forth, none of which are flattering or intelligent statements, the usual rebuttal is simply “Not all of them”.

So, Emrazz asked Twitter not just about men who didn’t fit the demonization that was thrown about in feminist academia, but specifically men who went out of their way to prevent the misogynistic and antagonistic behaviour towards women. There were 1.5 thousand retweets to that simple question, and almost a thousand responses. They’re full of men who, if you’re someone who’s lost faith, will help you regain your trust in humanity.

When I see men cat calling women on the street I turn around and start doing it to them. It’s AMAZING.

It was while gaming. Gal used her mic for team communication and 2 guys harassed her, asking her to be their girlfriend, NSFW, etc. SUPER uncomfortable for everyone. TLDR told them off and for her to mute them & work with my friend and I instead after making sure she was ok.

Someone i respected joked about pretending to be trans so they could get a job because of hiring quotas, and i explained why that wasn’t appropriate, nor funny. He apologized, didn’t realize how much trans women actually deal with, and felt guilty for the rest of the night.

My suggestion for other people in a situation like that is don’t just speak up, explain *why* something is wrong, explain the impact it has on others, the context of what they’re saying, help them understand that what is a joke to them is likely life and death for someone else.

not sure if this counts, I almost lost my job because a woman I was trying to hire at equal pay to the other men in same position, and was told I could not offer her that pay. When I said BS she’s more qualified, has more experience, this is her pay….

they pushed back again. I said well, she should probably get a lawyer after she starts then. It finally got approved. My next review was not stellar because I wasn’t being a good executive team player. Oh yea, the HR person pushing back was female, it blew my mind.

A man was harassing a woman in the stair well of a subway. While maintaining eye contact, but at a distance, I loudly called the police on my cell phone. The man let the woman go, and the woman was able to run away. He ran off.

And people do learn. I remember walking past a construction site in NYC, guy opens his mouth, pauses for a second, and says “you look very nice today.” I thanked him.

One of few times I’ve been to a club a guy was trying to get a girl to dance and was being aggressive so I pretended I thought knew him and distracted him. After she left I told him to stop messing with uninterested girls. It’s not hard. 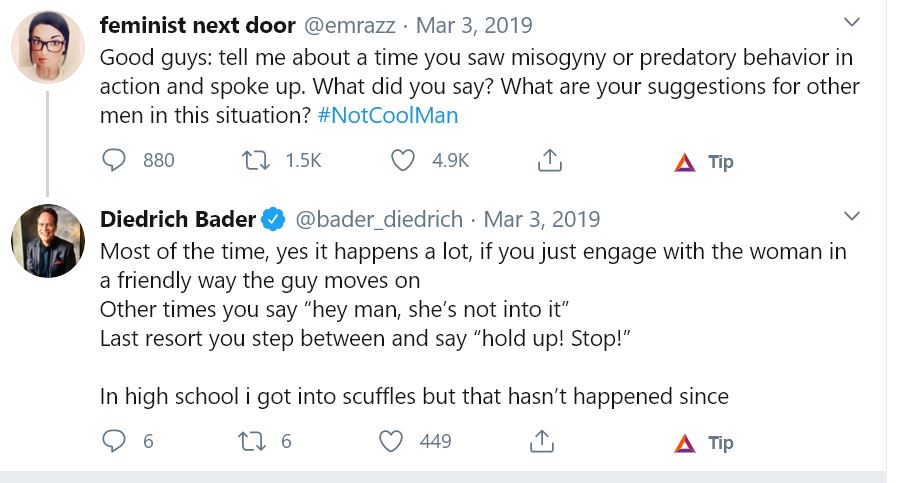 I have twin 14yo boys. It’s everyday, bro. It’s a constant battle to deflect and explain all the toxic BS that gets poured in their young minds every day in middle school. I’m super proud of the young men they’re becoming.

I diffused a situation between my boss and his GF (who was also an employee) when my staff (who were witnesses) saw him berating her and thought he was going to get physically violent, by walking into his office unannounced and uninvited 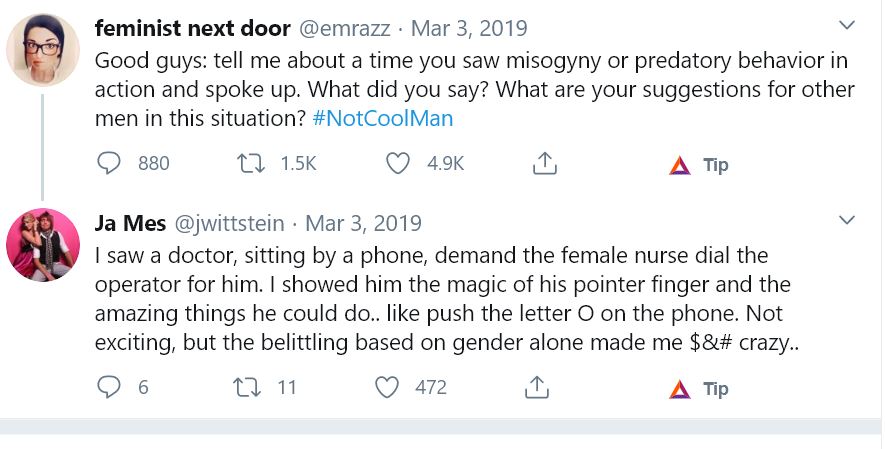 A guy at a club was trying to put the moves on a girl who was clearly not interested. At one point she even pushed him away, but he kept at it. I reached over, grabbed him, and forced him back so she could leave. Told him “she’s not interested. Drop it”

I only see overt misogyny and predatory behavior, such as a man kicking a woman while she’s down or slapping her to submission. Not something that I can tolerate without physical intervention. It may not be the #NotCoolMan approach, but physical engagement stops it.

What about you? What did you think about the whole tweet? Tell us down in the comments!