To cats. I mean I am not saying a human should try catnip because I am not sure how that ‘experiment’ would turn out. However, catnip is mostly harmless to cats if they are not allergic or don’t go batsh*t crazy when using this substance. Although that may be true, that doesn’t mean a mother can give catnip to her son’s cat without his explicit permission.

Giving it accidentally and realizing he doesn’t like it after is a different thing but this mother knows that but still continues to give it each and every day. I am not saying this is as big a deal as many of the comments are making it out to be but lying is never a good idea in any sort of relationship and why go to so many lengths to hide this anyway?

I am well aware the title sounds very wrong but I promise it is not as bad as it seems. 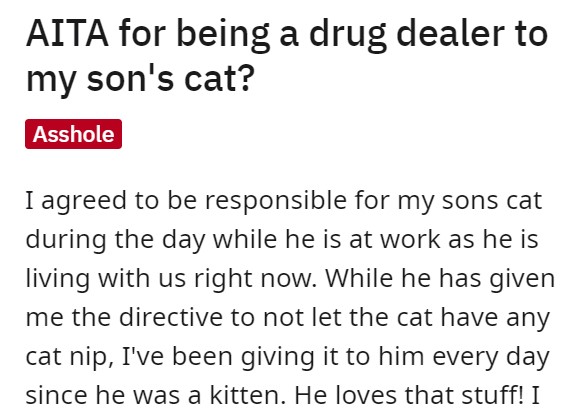 From what I know catnip isn’t actually harmful to cats usually. 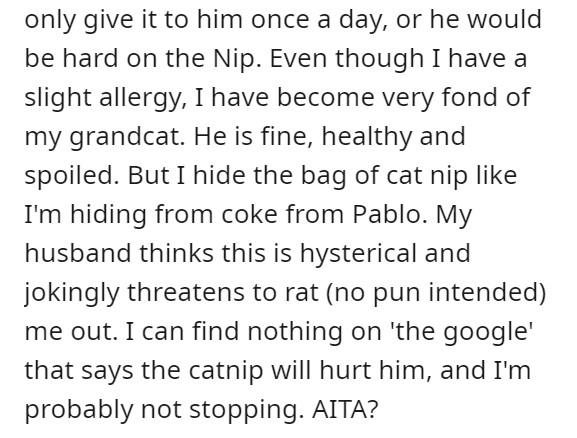 I would agree with this part since it is technically hiding the truth from him. 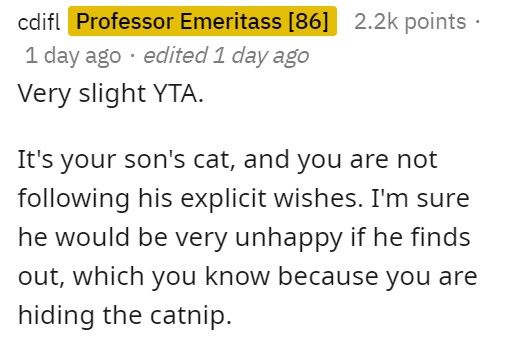 However, this is taking it a bit too far if she hasn’t done anything else. 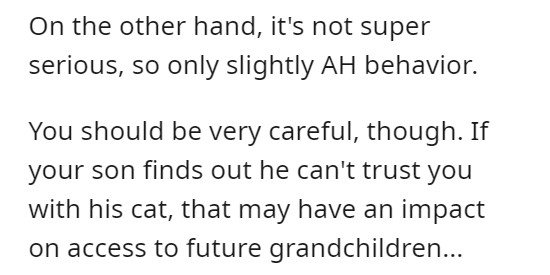 I would never say dishonestly is a good thing but this scenario is not as bad as people are making it out to be. 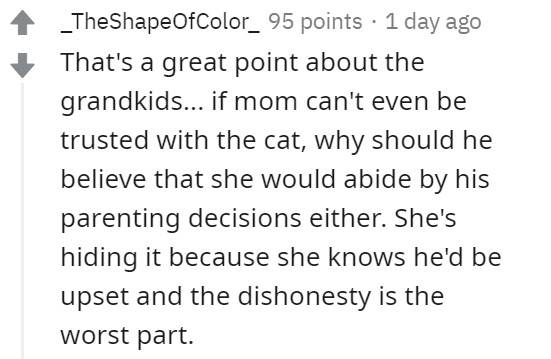 And it isn’t like we have any proof of her acting this sort of way in every situation. 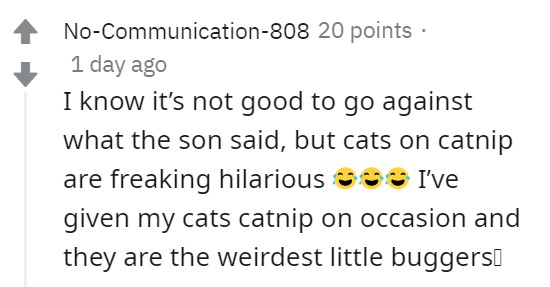 This made me laugh my husband would totally threaten to rat me out too. I think it’s fairly harmless, but your son did say “no cat weed”. So, I’m going to go soft soft soft YTA.

I have no idea why people assume you’d be a terrible grandmother to kids. This is essentially equivalent to giving a kid a cookie or candy when mom and dad said no (barring the child from having health issues that would make that harmful).

Regardless I snickered at this post. Cat tax! We want to see the kitty! –Smeli_meli2

If the cat is safe and healthy, I don’t see how catnip is bad for him. 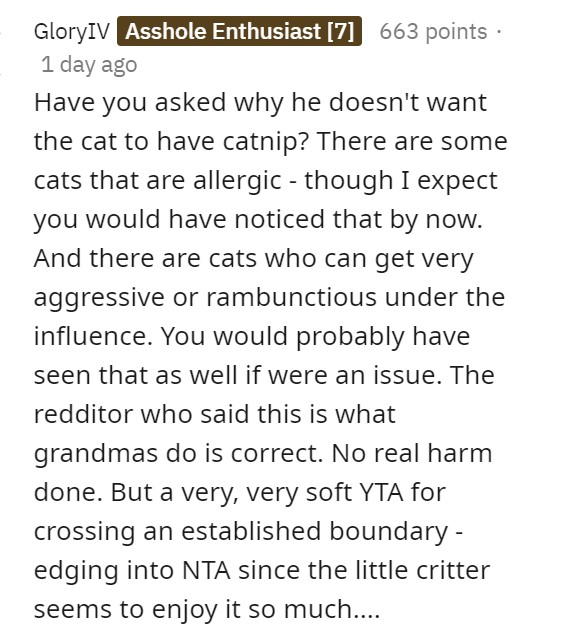 It also seems the woman really cares for the cat. 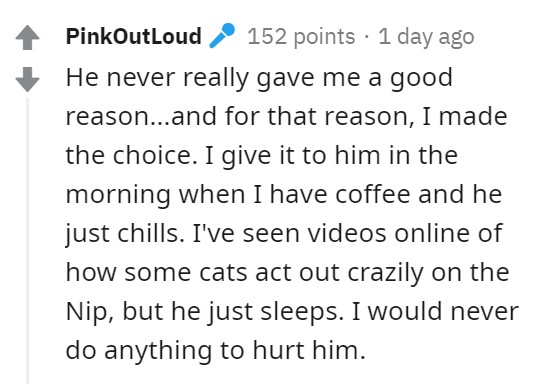 However, thankfully we did get an update on what happened after she told her son. 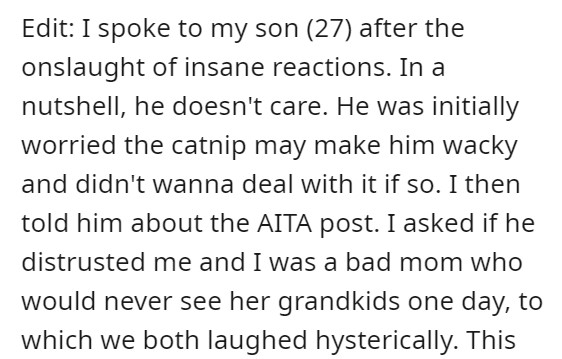 As it turns out, it really wasn’t a big deal and he was fine with it. 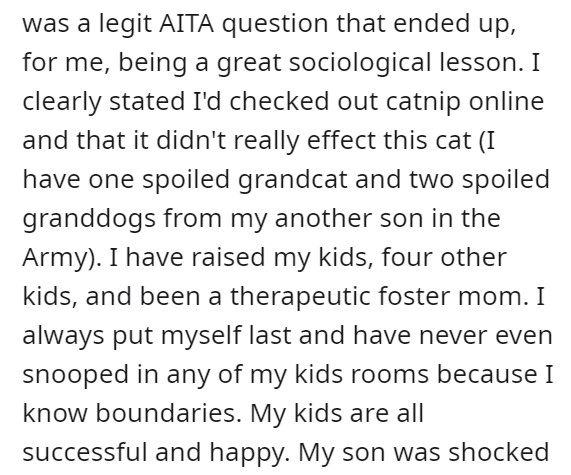 Honestly, everyone has a different story and we can’t judge anything without a little bias. 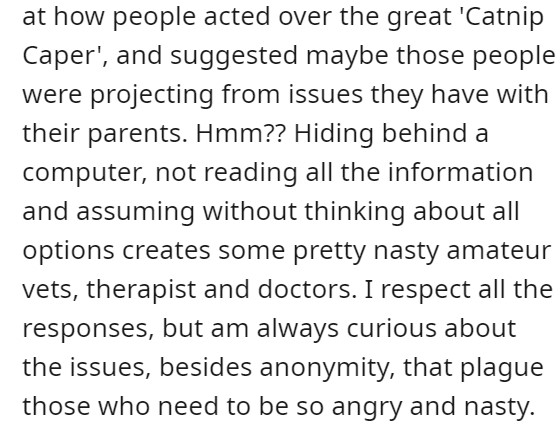 At the end of the day, nothing bad happened and that is very rare in this day and age.

She just needs to tell him so he can make decisions based on that. It’s inevitable that the people caring for your kids or pets will do some things differently but you should know what those things are.

Like if someone’s giving them occasional treats, you wouldn’t be thrilled but you also probably wouldn’t stop letting them see them. If they plan on letting them run outside unsupervised or let them watch disturbing things, you need to find other arrangements.

In any case, you should be told. –Stellaaahhhh

Would you get angry at your parents for doing something similar? Comment down below and let us know.