Not everyone can have kids safely.

Pregnancy is not for everyone as it can wreak havoc on many people’s bodies. And some people didn’t even want kids in the first place but are forced to go through the experience just because that is what society demands of them. It is seen a heresy if a woman says she is not interested in marriage or having kids. After all, what else are we here for but to reproduce? Well, most countries are already overpopulated so it isn’t as if humans have a chance of becoming extinct if some of us choose not to reproduce.

Although it has been hammered into our brains that kids are a blessing and that life has no meaning without them. However, many people can’t even go through pregnancy safely as for some, they can have serious health issues and even pass away in extreme cases. That is the sort of thing this individual faces. And her parents know that but still can’t seem to understand why she wouldn’t want kids.

You can see how that played out by scrolling below.

She firstly explains she does indeed like kids but just doesn’t want them for herself.

Which is her own choice and nobody should make her feel guilty for putting her needs first.

So when her mother brought up the subject, she tried to make it go away as nicely as possible. 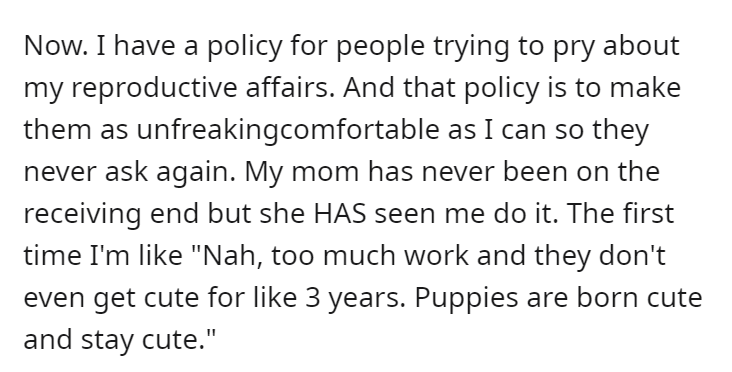 However, the mother wasn’t having it, so in the heat of the moment, some things were said.

She clearly got hurt by what she heard so she hung up on her daughter. 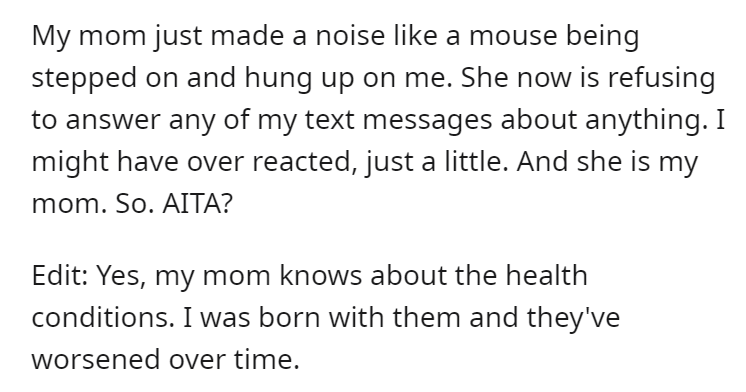 However, she shouldn’t bring up such sore subjects in the first place unless she wants her daughter to retort. 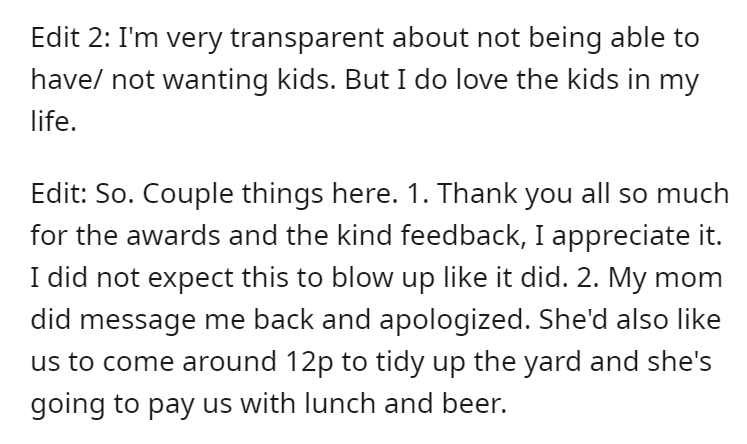 People just straight-up assume that you must hate kids if you don’t want them.

This sub seems to like to attack people for not wanting kids? Or being harsh concerning kids. I figured it was a good addition. And it’s true. I love the kids in my life. They’re my favorite little weirdos. –hack_writer_poser

And most comments agreed that what she did was perfectly handled and that her mother should have known better. 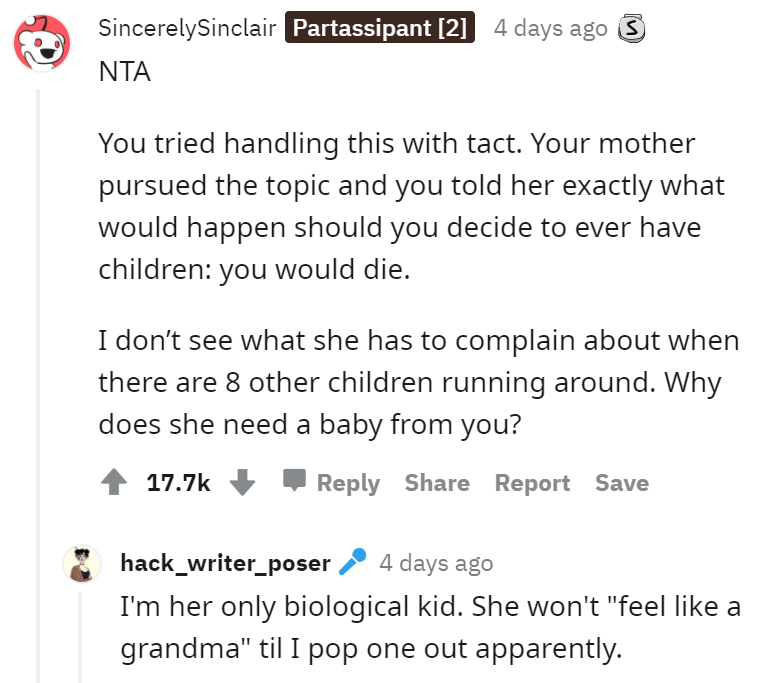 She might really want kids but she can’t force someone else to fulfill her wishes. 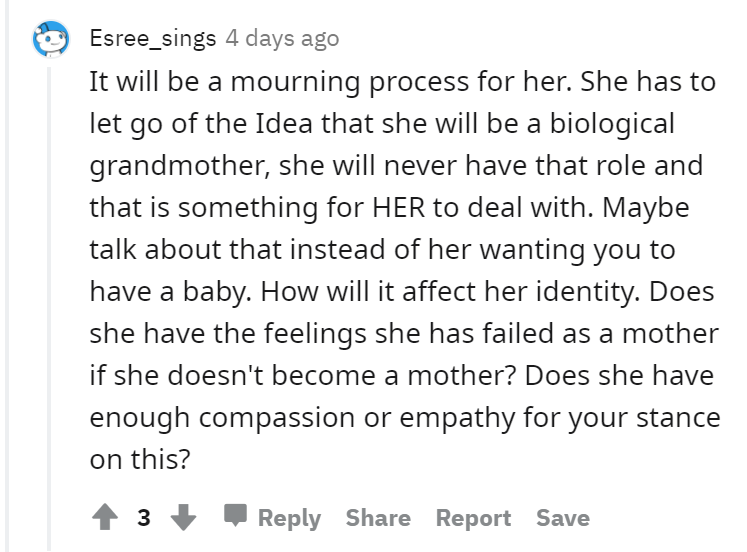 She would not only be putting her life at risk but she also doesn’t want kids in the first place. 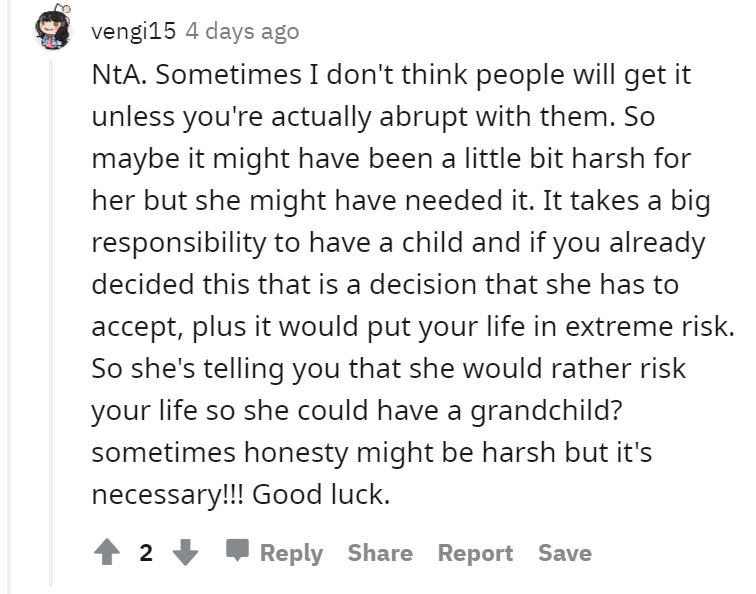 According to her health condition, she is not meant to reproduce either. 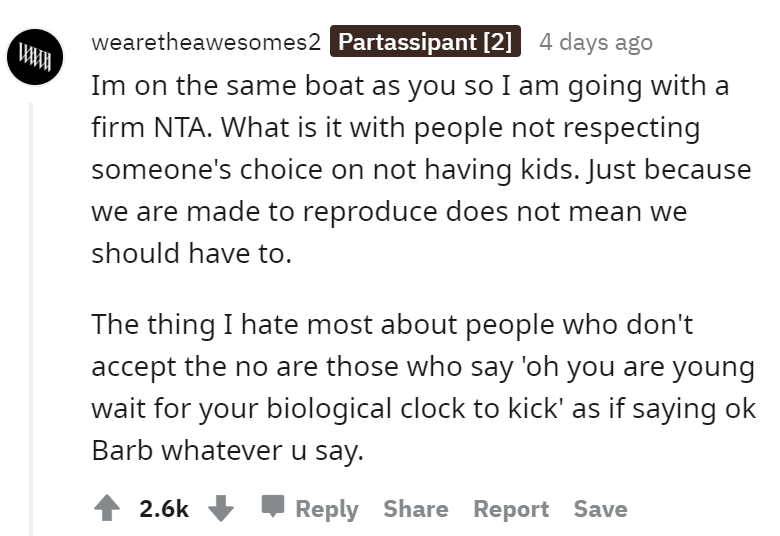 Some people in the comments also mentioned how their parents were pretty amazing about their choices. 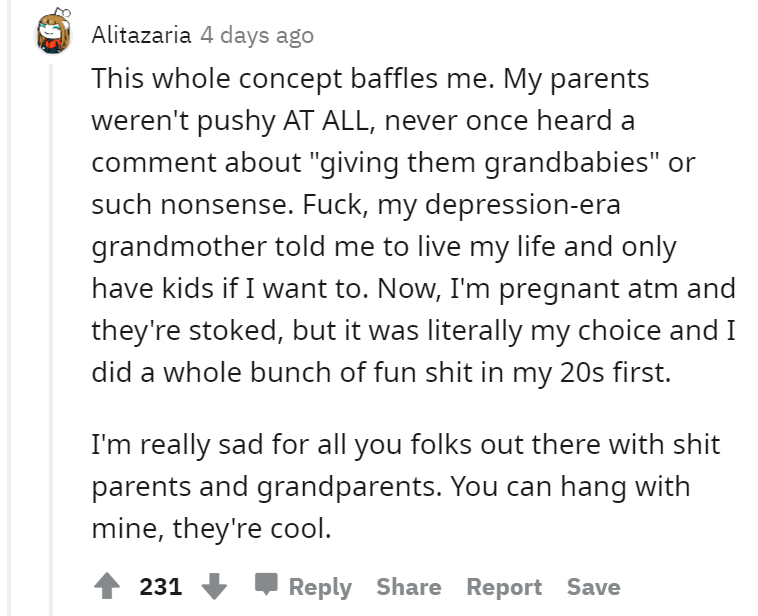 If she didn’t want to get hurt, she shouldn’t have brought it up. 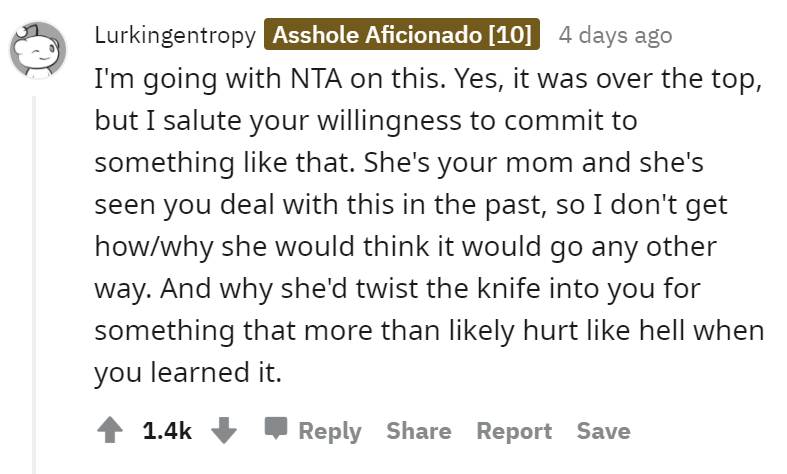 It hurt a lot initially. I was devastated. Because in the area where I live people usually start having kids pretty young and EVERYTHING has to be kid-friendly… But about the time nephews started coming I realized that I really dislike taking care of babies.

And by the time I got to college I discovered how much fun it is to be the cool wine aunt. That helped. But every so often it still hurts, especially when my mom presses the issue. –hack_writer_poser

What are your thoughts on how she handled this? Comment down below and let us know.