Gifts should never be a demand.

After all, giving a gift means you like someone and want to do something nice for them. But in recent culture, many people expect gifts and some even demand what they want no matter how expensive it is. That is the sort of bridezilla we have here today. Not only did she make a whole post of what gifts she wanted. She also had a rule that no gift should be under $400 which is plain absurd.

I mean not everyone is able to spend that much on a friend’s wedding. So most people would likely not come. And even those who wanted to come in the first place might be rubbed the wrong way by this post. Because it makes her look like a greedy and selfish person since all the gifts she mentions are for her and she doesn’t even mention the groom which is quite surprising. You can read the whole post yourself by scrolling below.

She starts off by telling everyone to RSVP or they might not be able to fit everyone in the wedding.

And then she divulges what sort of gifts she wants from all her friends and family.

I can understand not wanting people to bring the same thing but having a limit of over $400 is just absurd.

She thinks it is okay to ask someone to pay for the tiling of her entire house. 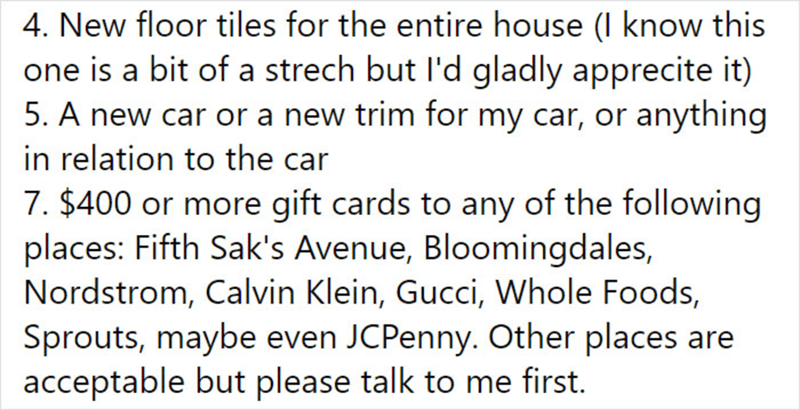 The weird thing is none of this mentions anything for the groom at all.

Does he have a separate list or does she not care about him at all? 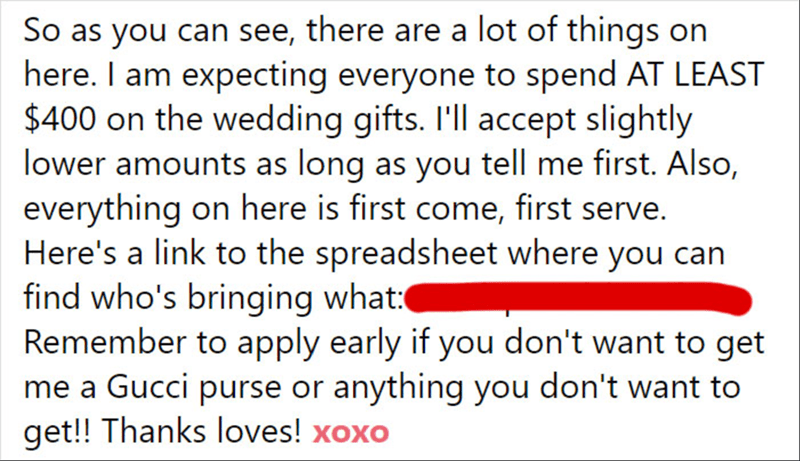 Most people’s comments focused on the specific point of gifts that are for cars.

Saw screenshots of someone doing almost the exact same thing some years ago, also on Facebook, and how it progressed. The gifts had to be worth around €200 IIRC. The bride also gave the option of sponsoring the couple’s honeymoon and really didn’t want to pay anything for the trip herself.

It didn’t turn out well. People commented that they won’t show up, and/or that they straight up questioned their relationship with the bride because of the post. Many people unfriended apparently. The bride tried going down to 150 or 100 with the gifts’ value limit first, before ultimately and bitterly revoking it, all the while complaining how she had no “true” friends. Don’t know the exact outcome, pretty sure the marriage happened anyway, but I’m also pretty sure the guest list was cut to half its original length.

At least she didn’t make all the gift requests be about herself, so there was that. –Omsus

I wonder if anyone even showed up at the wedding.

That would actually be hilarious and probably ruin the bride’s ‘perfect day’.

Others commented on how everyone will be sick the day of her wedding.

I did not notice that ad now I am just confused.

He really will need a divorce lawyer if he goes through with the wedding.

He probably already has but she doesn’t know about it.

Would you ever go to such a wedding? If so what gift will you bring her? Comment down below and let us know.