Mothers-in-law can be a pain in the butt.

You will rarely find a person who is very close to their in-laws because usually there has to be some kind of issue. Now, I am not saying in-laws themselves are bad. But if there is a subreddit dedicated to mothers-in-law you know it has to be bad. And today we have a story about a racist mother-in-law.

At least that is what I think she is. Now, I am aware not everyone likes Indian food, it can be spicy and very aromatic which some people find intimidating. Personally, my culture’s food is mostly same as Indian so I have been brought up eating chillis for breakfast however not all people can handle it.

Although that does not mean you can insult someone’s culture if you are at their home. This woman seems to think that is the right way to go. Let’s just say it didn’t end well for her after that.

So they are an interracial couple which is perfectly normal. 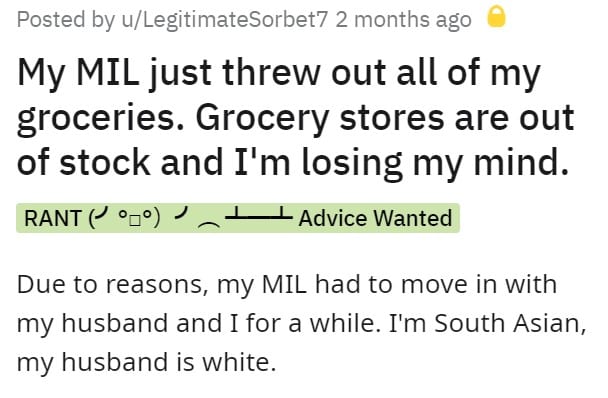 Eating with your hands is not really as weird as people make it out to be. 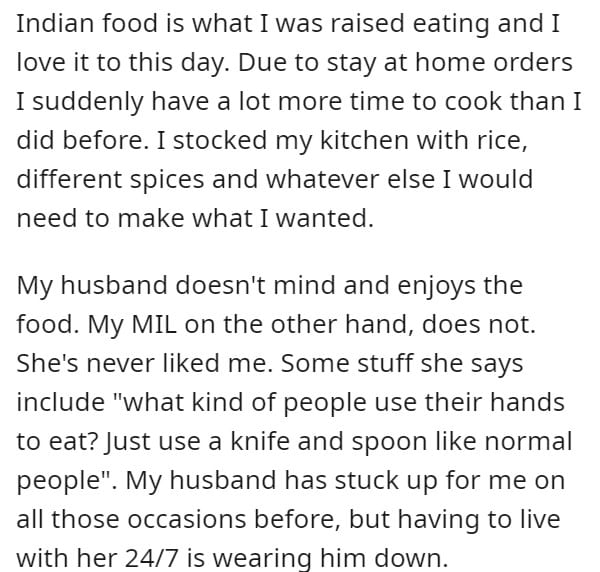 Especially if you are having curry, you are supposed to eat it with naan or roti. Not eat it with a spoon. Nobody would do that. And it doesn’t make anyone a ‘savage’ if they eat with their hands.

She even tried talking with her Mother-in-law but that didn’t work out. 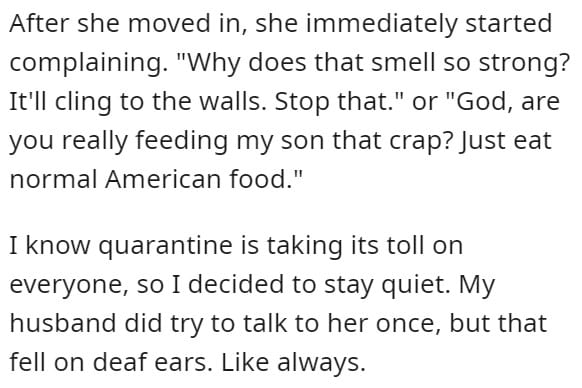 Basically everything she had bought was missing from the pantry.

So she basically dissed her culture. 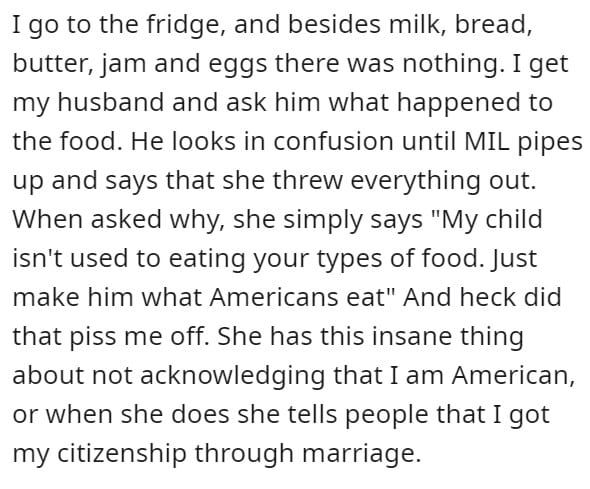 Get her the hell out of your house or make her pay for the food she threw out!

WTF? This is a pandemic, she doesn’t get to throw out food. Evict her now. Her behavior is atrocious and her own biological daughter can take care of her and feed her whatever the heck she likes.

As an aside, turmeric and ginger have many healthy properties and your husband will be in much better shape health wise than eating the standard, starchy American diet. (Which is what I’m eating…) –Demonkey44

It seems to be her mother-in-law is severely racist and needs to learn.

And she is entitled as well to put the cherry on top. 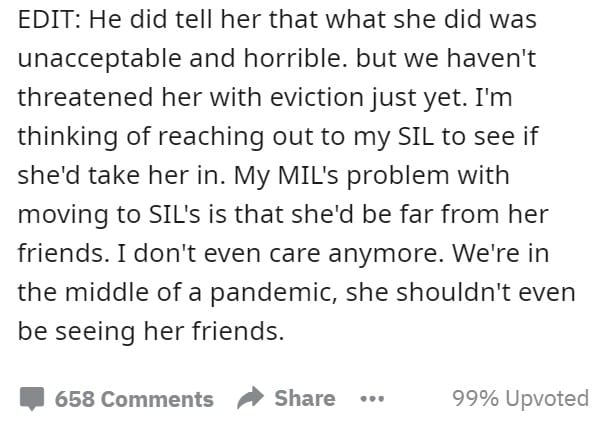 Thankfully she posted another update telling us what happened next. 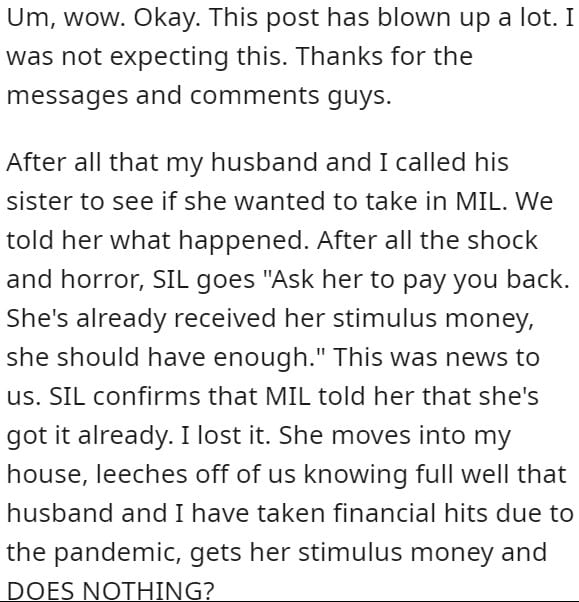 And her husband was right beside her kicking his mother to the curb. 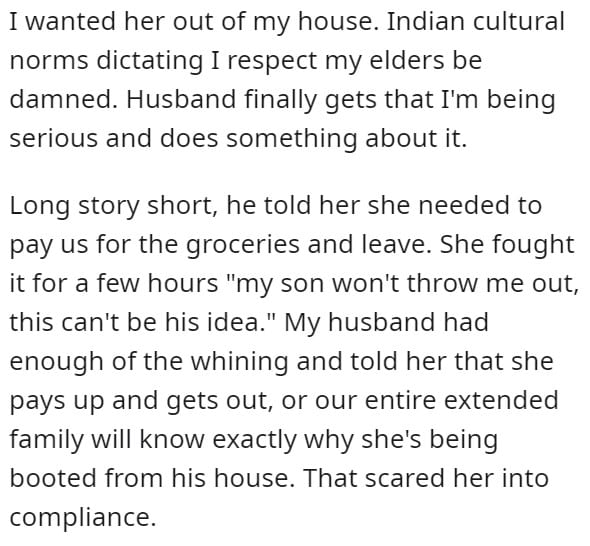 I really wish you had taken a photo of that look on her face. 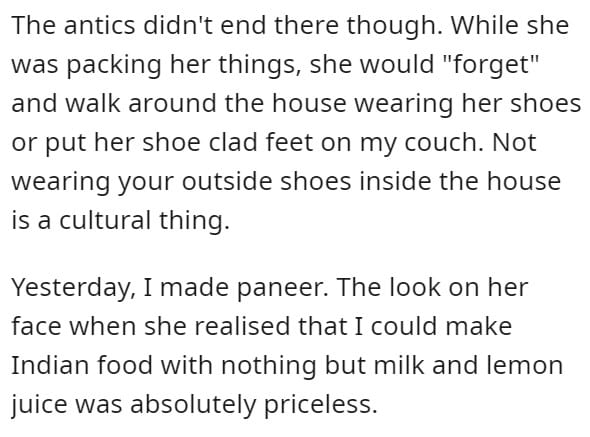 And you definitely deserve it! 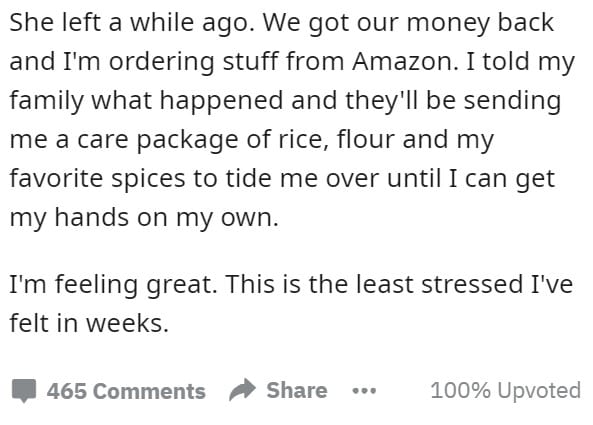 She wasn’t worth all the stress she was giving you guys. 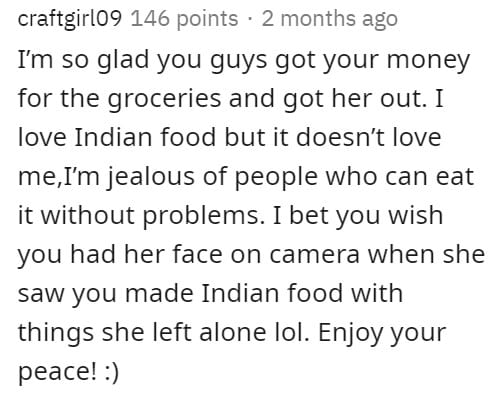 I would have blown up if I was in that situation. 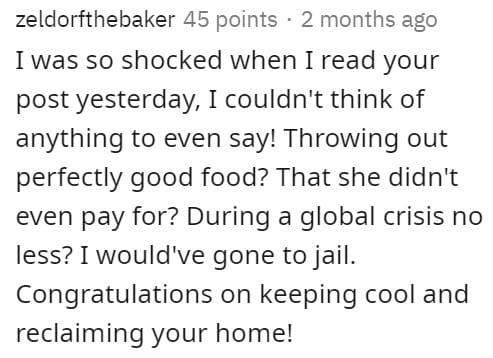 What did you think about this story? Do you think they did the right thing by throwing the mother out? let us know in the comments below. Don’t forget to share so others can chime in with their opinions as well.