Animals are very fascinating creatures if you really think about it. They fill you with intrigue.

Most humans are under the impression that animals are not capable of comprehending a problem and lack the ability to solve problems. Contrary to that popular belief, I would like to inform you all that animals are not as aloof as we may think they are. In actuality, animals are smarter than we could ever imagine. A great example would be a dog. You ever wondered why dogs adopt habits and learn our verbal cues so well? It is because he has the intelligence of a two-year-old child. While you may think that is not a lot, but children are great learners. Given that, a dog having the intelligence of a two-year-old can even learn up to 250 words just like a normal human child can. Dogs are very efficient in acknowledging and responding to human emotions. That is why your dog always notices when you are sad and makes attempts to cheer you up.

Similar to that, many animals are insanely intelligent. We may think that humans are the smartest creatures on this planet. But let me tell you, that some animals are so incredibly smart, that they even outplay humans in this regard. If you think I am alluding to any particular animal, then you are absolutely right. The brilliant animal that we will be talking about today is Octopus. A lot of people will be unaware of the fact that Octopus can follow through patterns and is very efficient in noticing minor details. These are not some regular details that you may think are easy to pick, but even humans may not be attentive to that much detail. This might be hard to believe so we have collected some surprising and educative stories about Octopuses.

Keep scrolling to find out!

Wow, octopuses really can think! I always used to think that sea creatures are only concerned about food and do not really pay attention to the things around them. They would not notice any object that is close to them or throw at them. I imagined they would just dodge any object that is causing hindrance in their way, and move forward with their day. Apparently, Octopuses can do more than that. This octopus got out of the tank and all the way to the caretaker! Octopuses know how to show emotions like anger and frustration. 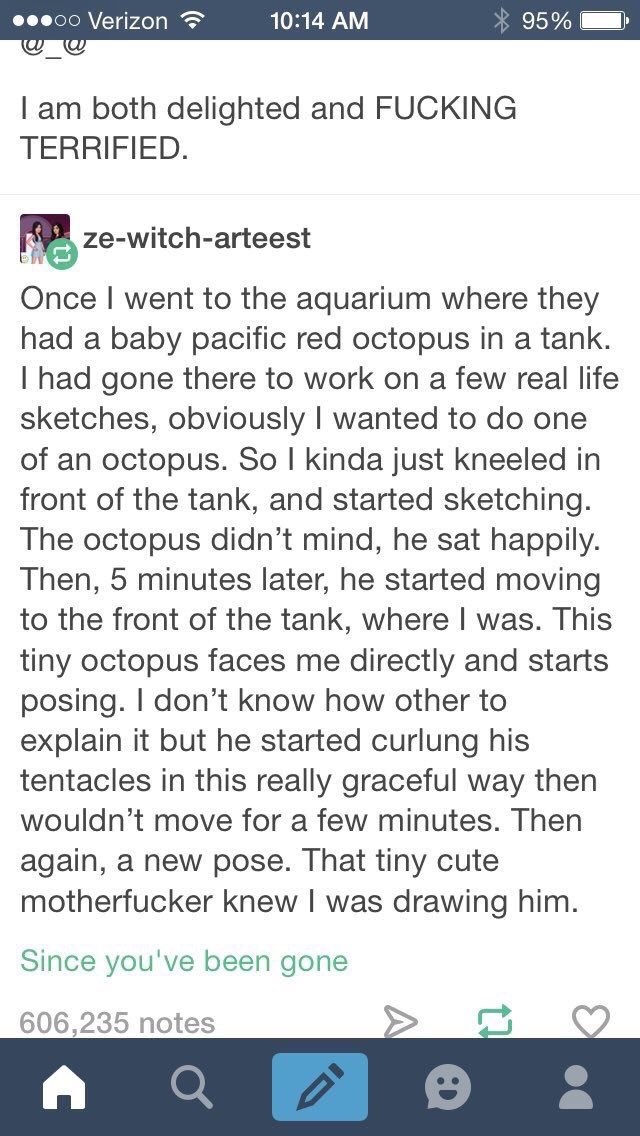 This is blowing my mind! This octopus was actually posing? This means that it was able to register that the person was observing and noticing. You would expect an animal to maybe get closer or sit next to the person who is observing, but to pose is a completely different thing. God, he was even switching poses! Octopuses have a smart brain and flattery nature, which is not a piece of hidden information anymore.

Are you creeped out yet or feeling more intrigued? To be honest, I am kind of shocked. I don’t think any of us have put that much thought into octopuses and how they function. I always forget that animals, most specifically sea creatures, could make such conscious decisions.

Did you know that octopuses are known to be one of the oldest creatures to exist on earth? Well, the oldest known fossil that was discovered of an animal that lived about 296 million years ago appeared to be an octopus. On the other hand, an octopus has 3 hearts! Yes, sir, you heard that right! While two of the hearts work only to move their blood beyond his gills, the third one makes sure that the blood is being circulated properly into the organs. The organ heart literally stops while the octopus is taking a swim which explains why these creatures would mostly crawl rather than going for a long swim as it exhausts them.

Octopuses are known to have “blue blood”. In order to survive in the depths of the ocean, octopuses developed a blood-based on copper instead of iron, called hemocyanin, which makes their blood blue. When the water temperature is very low and there is not much oxygen around, this copper base carries oxygen more efficiently than haemoglobin. But this system also makes them extremely sensitive to changes in acidity. If the pH of the surrounding water drops too low, the octopus cannot circulate enough oxygen. Therefore, researchers worry about the impact of ocean acidification caused by climate change on animals. 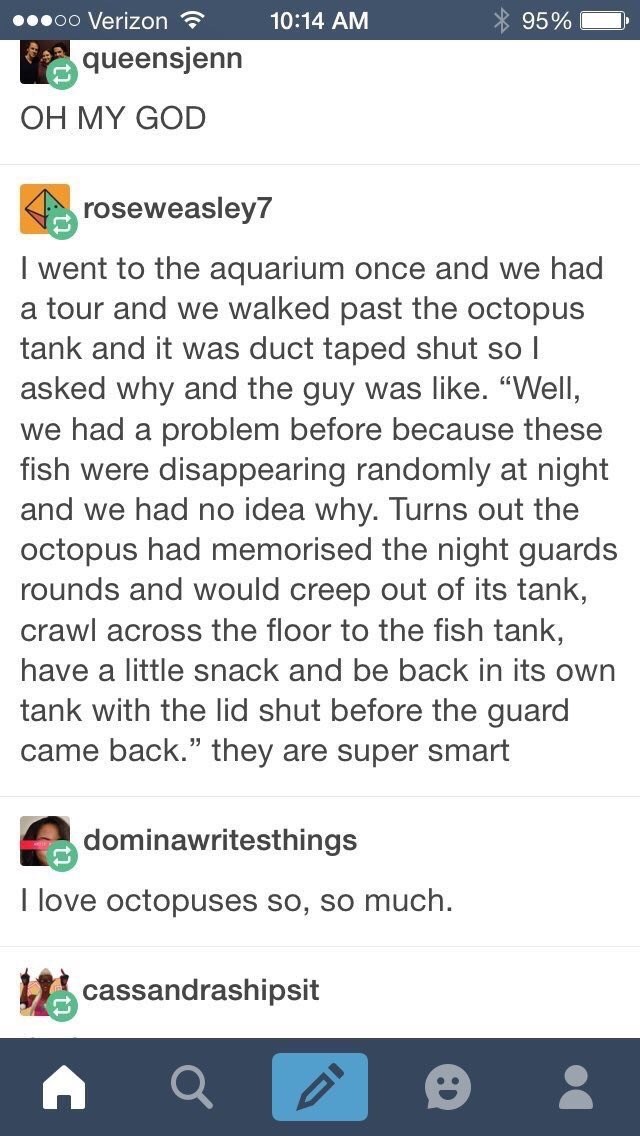 I have completely lost my mind! This is such big news to me. I can handle an octopus posing and sitting nicely around humans. I can even handle octopuses coming out of their tanks to throw shrimps at a person. What’s hard for me to digest is that Octopuses can literally learn schedules? It is not just that actually. The fact that this octopus actually had thought processes around this, and invested time into deciding when to get out of the tank is shocking.

Lastly, male octopuses wander off to die once they mate. Mating and parenting are short-lived things for octopuses, and they will die soon. This species undergoes in vitro fertilization. A few males insert their seminal vesicles directly into the tubular funnel that the female used to breathe, or they did deliver sperm to her, and she always received it with one right arm (researchers don’t know why). Later, the male wandered to death. As for females octopuses, they can lay up to 400,000 eggs, and they will obsessively take care of these eggs. Prioritizing their maternal duties the female octopuses would stop eating. But she doesn’t starve herself to death; instead, when the eggs hatch, the female’s body turns to her. Your body begins a series of cell suicides, starting from your optic glands and spreading outward through your tissues and organs until you die.

After reading this mind-blowing information about Octopuses, I am convinced that my obsession with these animals is about to go to a whole new level. It makes me also wonder how little we know about the animals in the ocean and water. We know a lot about animals on land and that information is like common sense to us now. However, I am intrigued more than ever, to learn more about Octopuses and other sea creatures.

Do you feel the same way? Let us know if this information came as a shock to you too!