Certain milestones occur in our life that separate us from our loved ones. In some very sad cases, we are separated from our beloved and dear cats. Cats are a part of our heart and we invest our everything in them. It wouldn’t be wrong to say that we care about our furry little companions just like our own babies. We shower them with an enormous amount of love, don’t care about being scratched by them or bearing their bossy attitude because hey, we just can never resist our adorable felines, can we? We love being greeted by our cats as soon as we enter the home or whenever we are feeling lonely, our cats are always there to make us feel good. Even if you are having a bad day, spending time with your cat would make you forget about everything that’s happening bad around you.

Anyways, today we came across a sad and happy story of a Reddit user who’s known as nexerxe and his time had come to leave his parent’s house for college. He had an adorable cat called Spotty, that he was very attached to, but could not take with them to college. Like most of us do, Nexerxe also left his dear cat with their parents. He trusted the parents to look after the cat and make sure it stays healthy and alive. What he did not know was, what’s coming up ahead. Eventually, Nexerxe found out that the parents had given away their cat without consent.

This completely devasted Nexerxe, but he was not going to give up on his kitten. He was too heartbroken to know that there is no clue of whether the little kitten is even safe. Completely shattered but still wanting to get his kitten back, Nexerxe swore to search for the kitten till it was found. And behold the power of the Internet, Nexerxe found his kitten! He arranged a GoFundMe campaign to collect funds so that he could re-adopt the kitten. Fortunately, Nexerxe was able to collect $240. This amount was donated by in total of 10 people. They all were deeply invested in making sure the kid could afford to have their kitten back, despite his financial struggles. 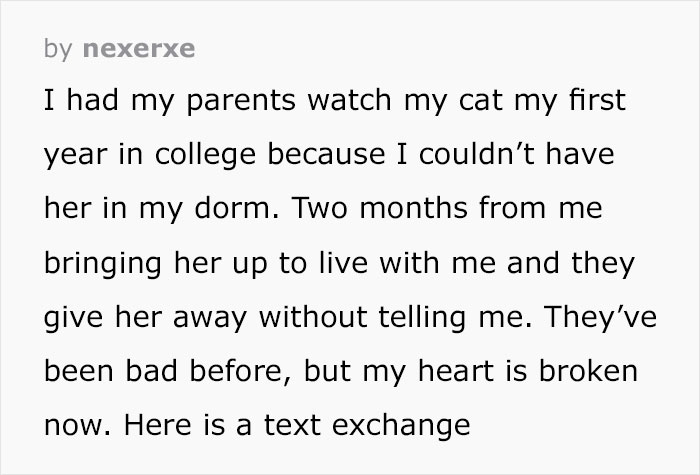 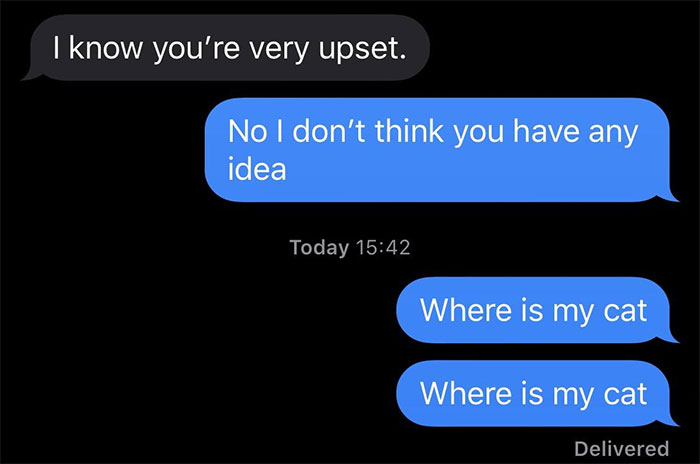 He were so deeply connected with the cat. 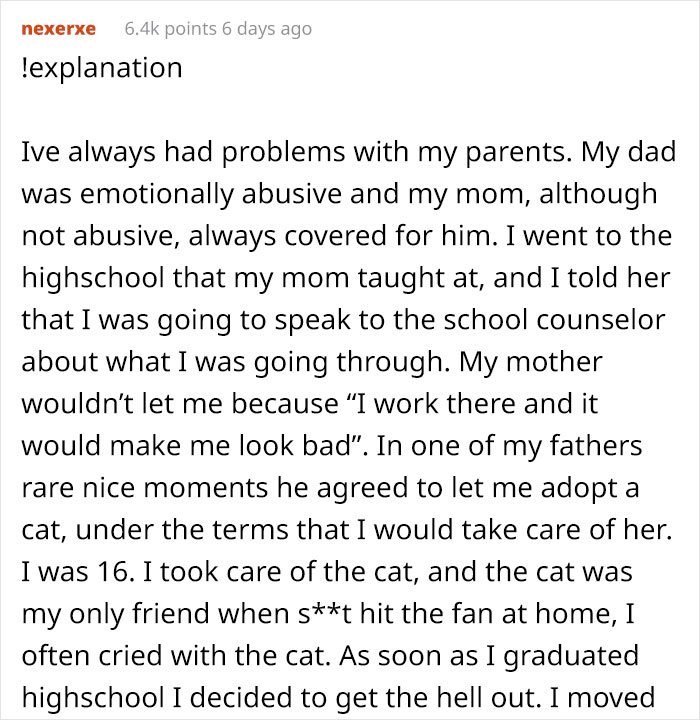 The person already had so many issues with their family. The cat was the only being in his life that brought a little bit of companionship in the Reddit user’s life. It is so devastating to know that parents fail to make a comfortable home for you, and then refuse to let you have other escapes too.

How empathetic of the parents!  (Sarcasm intended) 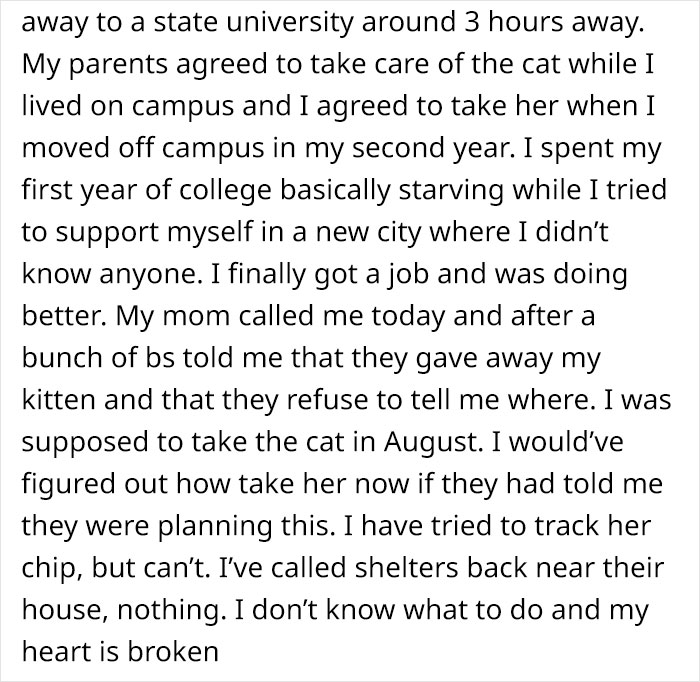 Wow, this person’s parents could not have been worse. They would not even tell him where the cat was given. And to know that the student was already having difficulties with the finances at college, it is so heart-shattering to know that he had to hear about his cat being given away without consent. It does not make sense what the rush was for the parents. They could have let their kid know that they could not manage the responsibility of the cat. Their kid would have handled it. 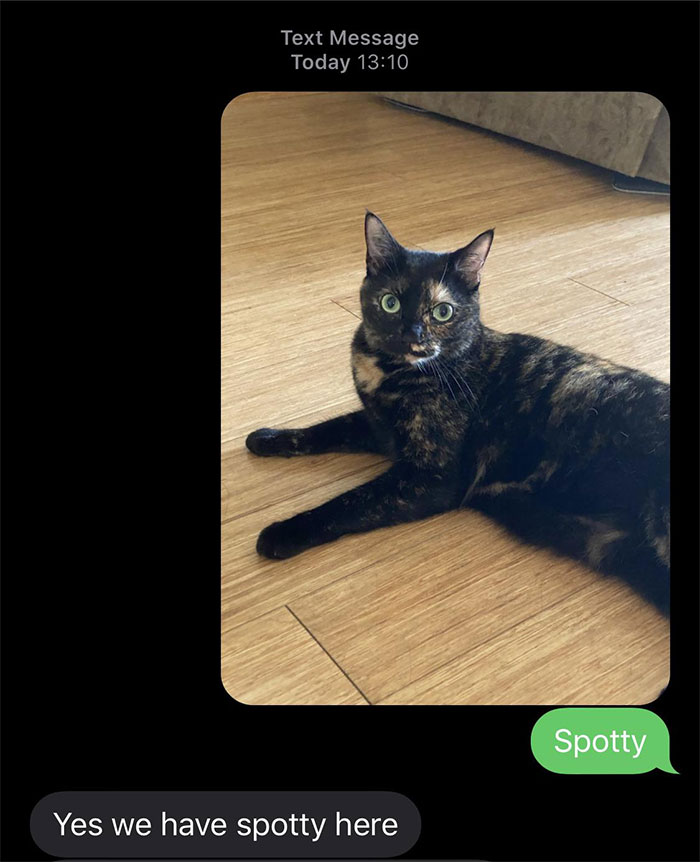 Finally, Nexerxe found the cat. We can only imagine how happy he must have been getting that text, “Yes, we have spotty here”. I hope the universe blesses the people at the shelter! 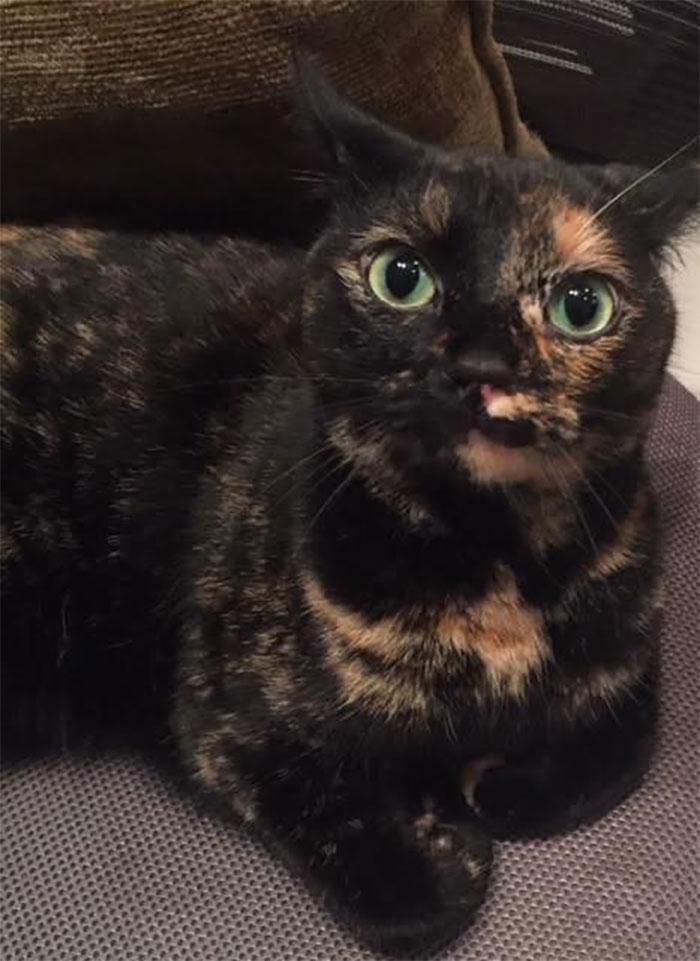 And do not underestimate spotty as just a cat or a pet, guys! This person has become a friend to Nexerxe during all those years the person was subjected to bad parents. Spotty was his only companion during the time he was subjected to their emotionally abusive father and bystander mother. “The only thing I had was my cat,” Nexerxe said.  “I moved out when I was 18 to get away from the abuse, and accepted that I would have to fully support myself in a town where I knew no one and had no job.”

Thankfully, Nexerxe has scored two jobs now and will be working full-time in one of the jobs. “I’ll do anything for my kitty,” he said. His life is incomplete without spotty!

People had a lot to say about it as well. 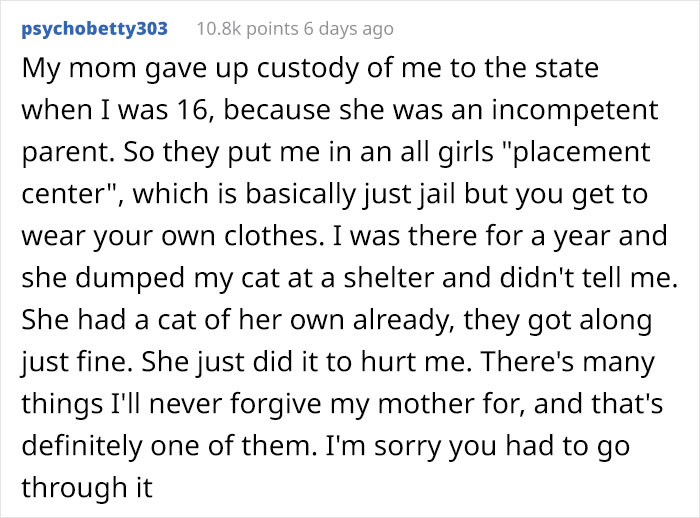 Sometimes it is hard to fathom how ruthless some parents can be.

People were empathetic and felt sorry that Nexerxe had to go through this. 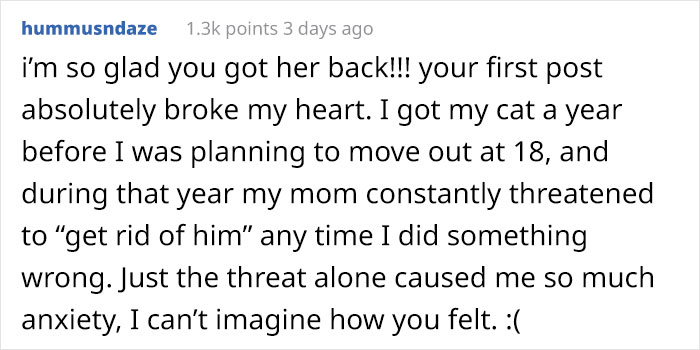 Everyone is just glad Nexerxe got his cat back, and so are we!

If my parents ever did this to my cat, I would genuinely consider being mad at them for a long time. This is no way to treat your child like this. Giving away something that your child holds so close to hear is nothing but heartless. However, we are so happy to know that Nexerxe got his cat back! He must have felt so relieved. Cats are like our children, companions, and friends all in one. Anyone who is not a cat parent cannot understand what a person goes through when they lose their kitten. In simple words, you just have to imagine being separated by the person or animal that you love the most and you just might be able to relate to the feeling.

And especially, in this case, it was Nexerxe’s only friend. We hope they never have to go through any such incidents again! If you’re having a cat, you won’t need to rely on a person to make you feel better or help you go through your gloomy days as your cat will be there to help you make it through! So, there are no doubts about how much of an important place our furry little companions holds in our hearts.

Oh well, in the end, we would like to know whether you have been in a similar situation or not? We hope that you didn’t but if you did, how did you react to it and how did you even manage to cope with the situation? Feel free to share your experiences with us down in the comments section below.