Comics are a form of art that most people haven’t had much exposure to beyond the handful of hilarious comic strips in newspapers that they might have come across. The world of comic art has progressed way beyond this humorous stand-alone joke format. Now, we can find comics for a wide variety of entertainment genres. From fantasy worlds and superheroes, illustrated in interactive and engaging ways to help our children’s imagination grow, to trendy and eccentric memes for the more mature audience, comics have a way of making it all work.

Recently a comic artist, Adam Ellis, has gained quite a reputation with his unique approach to comics. His work has a scary element to it that people really enjoy. These comics illustrate horror situations that made the reader feel like they’re part of the creepy experience and give them a handful of goosebumps. These comics are immensely appreciated and enjoyed by their audience due to their surrealism and uncanny nature.

On Instagram, Adam has nearly 2 million followers, indicating that his comics have gained a sizable following. Three of the artist’s eeriest comics are seen in the photographs below. So, scroll down to feel the goosebumps!

1. One of the best creepy island comics ever.

An Island, where only two people lived. 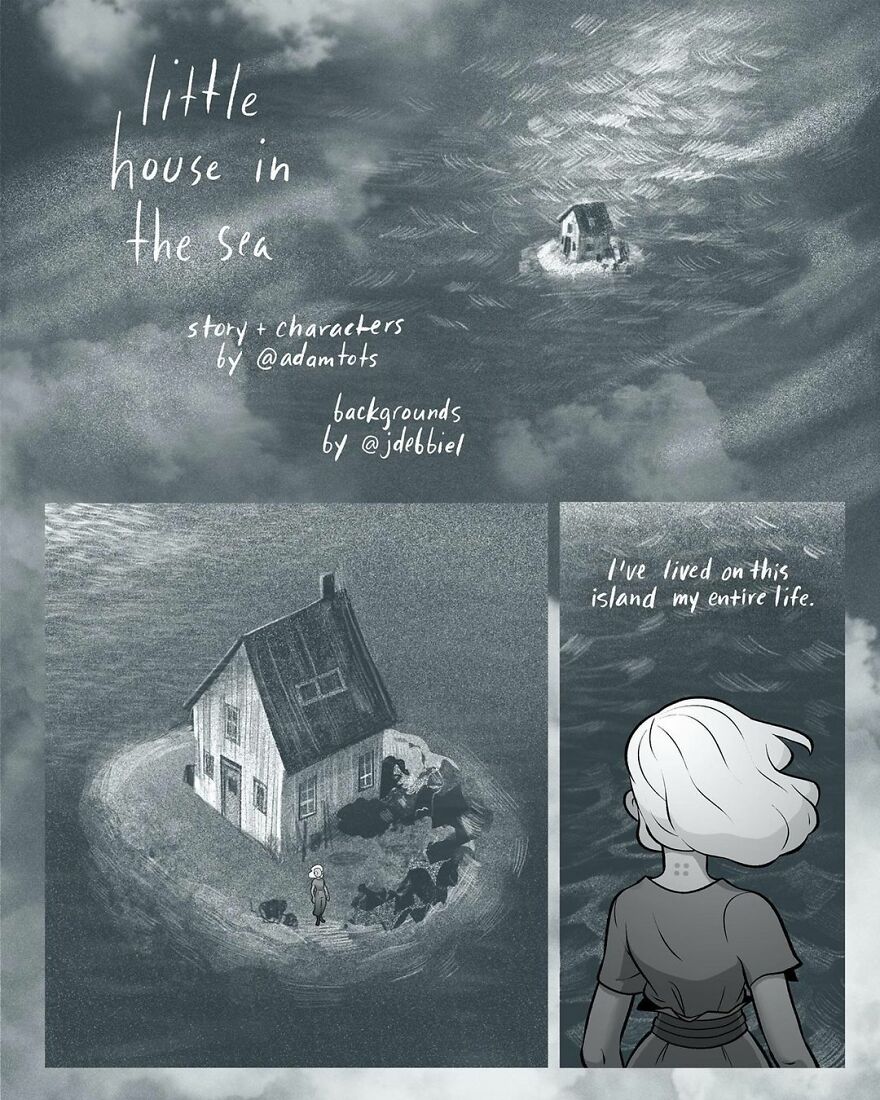 A small creepy island, where only mother and daughter lived all alone. 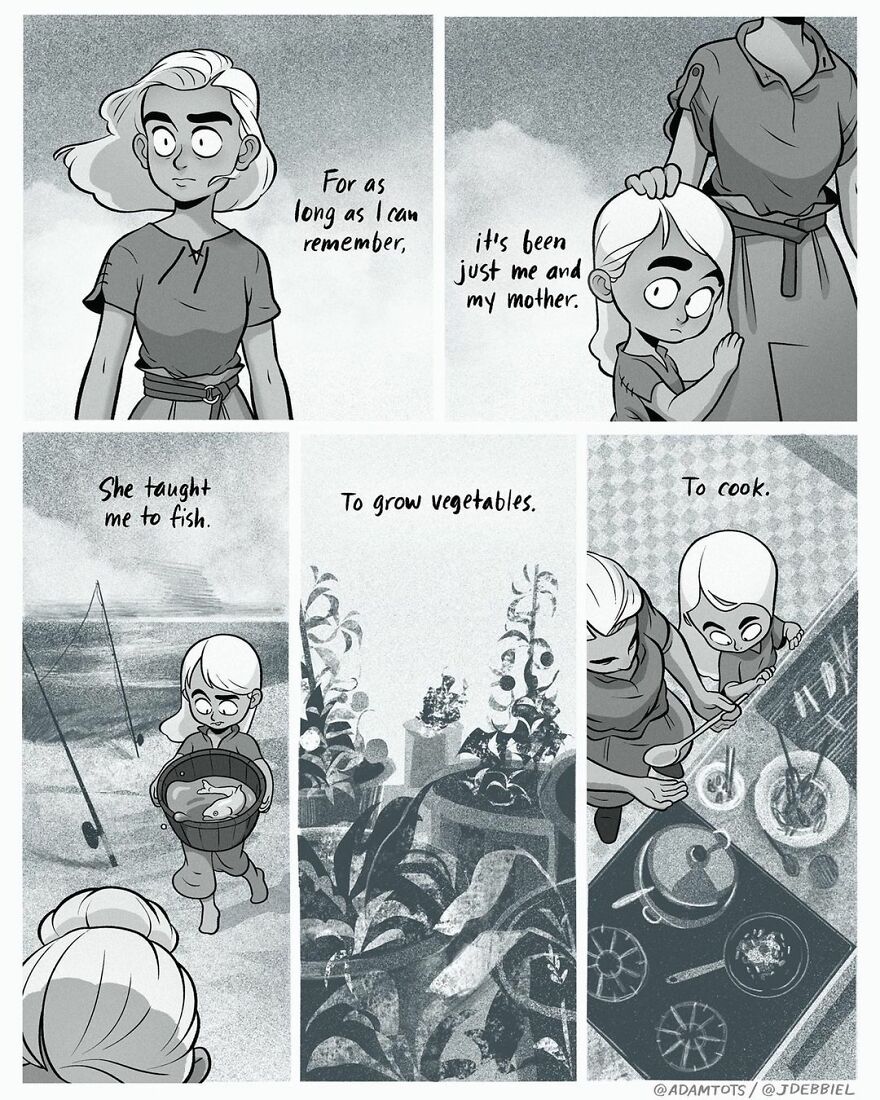 The vast blue ocean was a mystery for the daughter. But she was told never to question again. 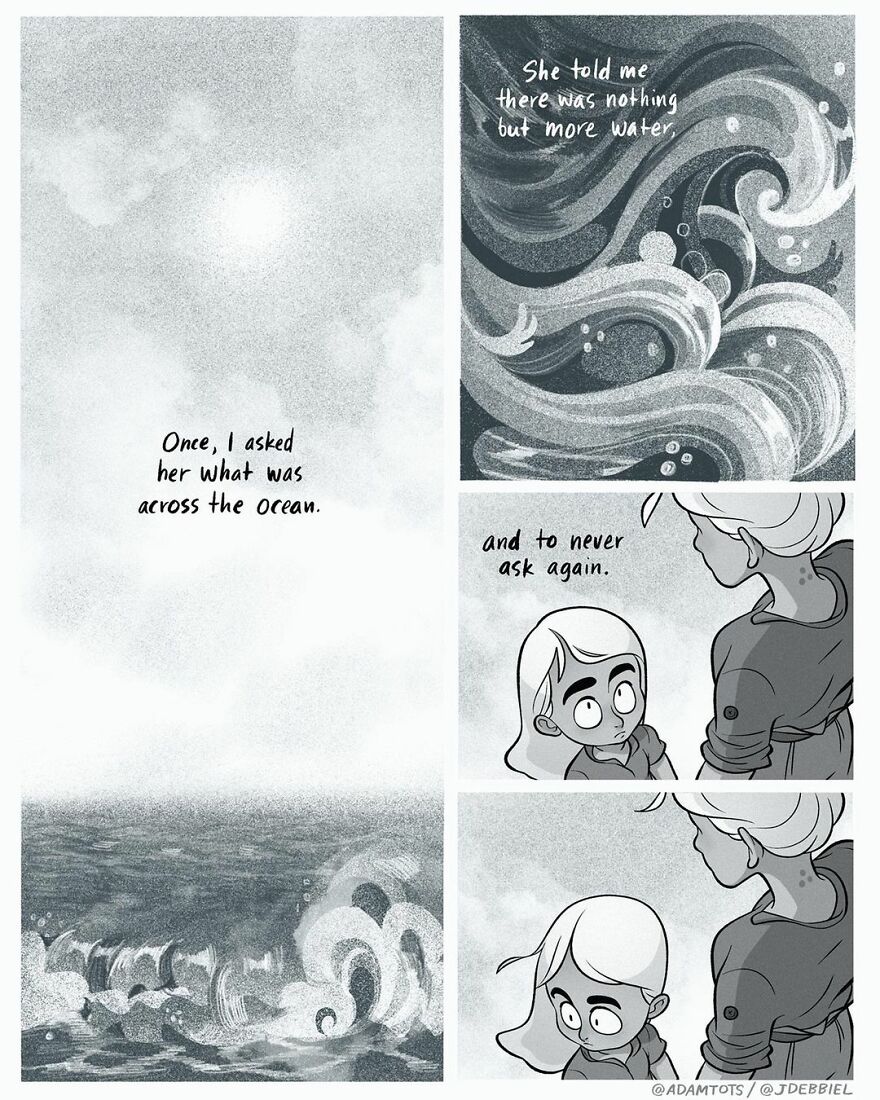 While there were only two people living there, the faith had a different plan for them. 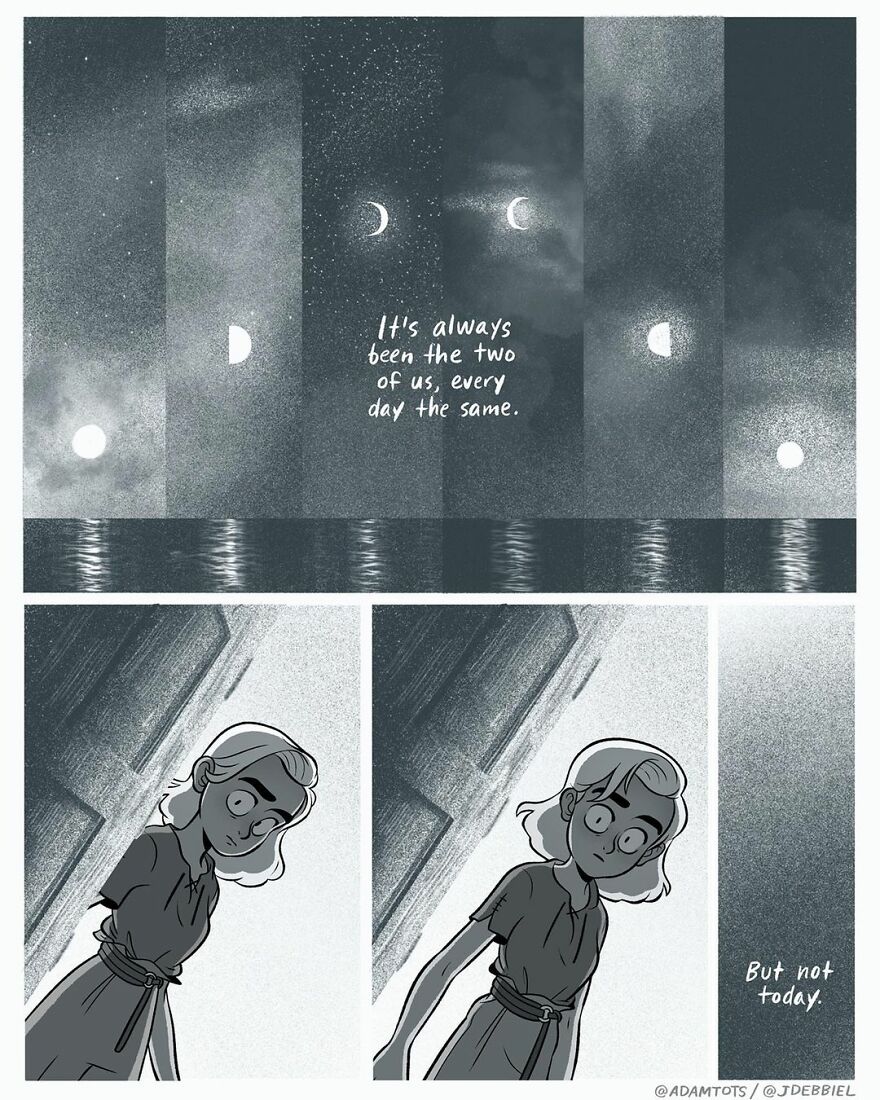 The mother passed away one day. 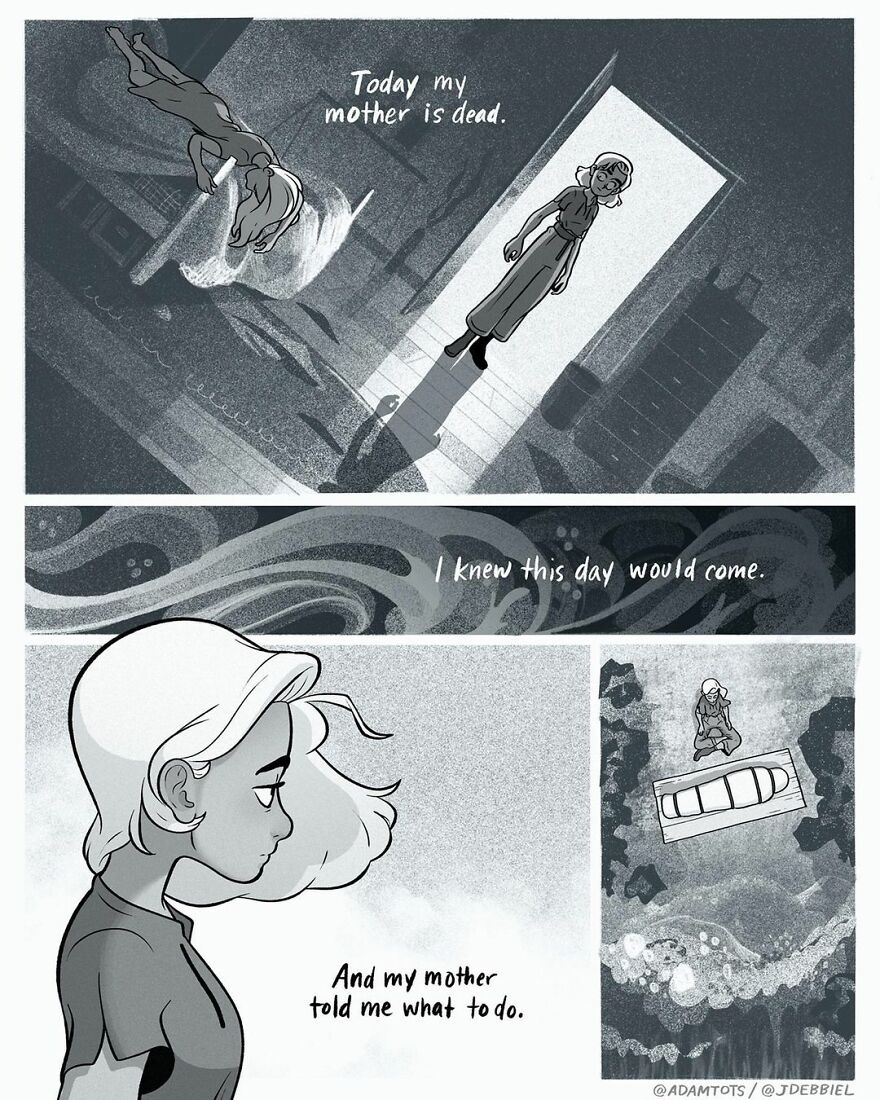 This strong girl was all prepared for this day. She knew what to do. 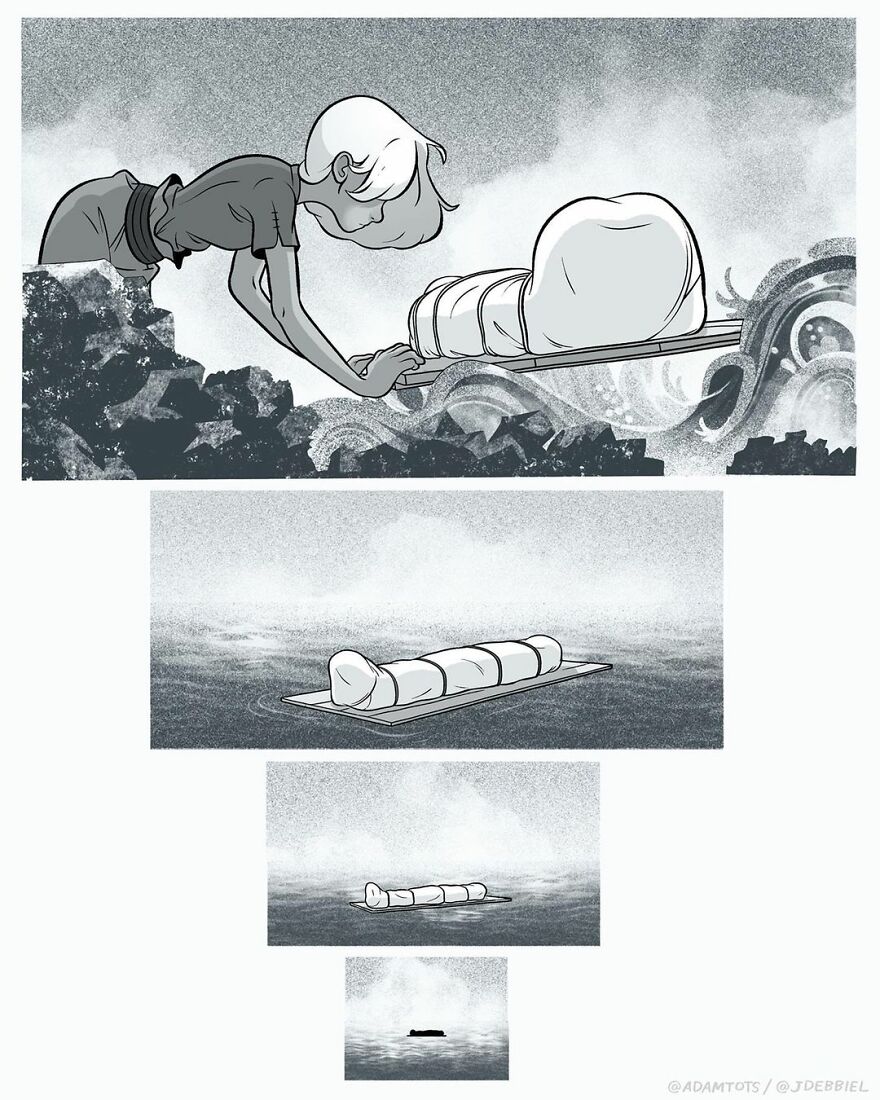 What’s that? An Egg? In a deep blue sea? 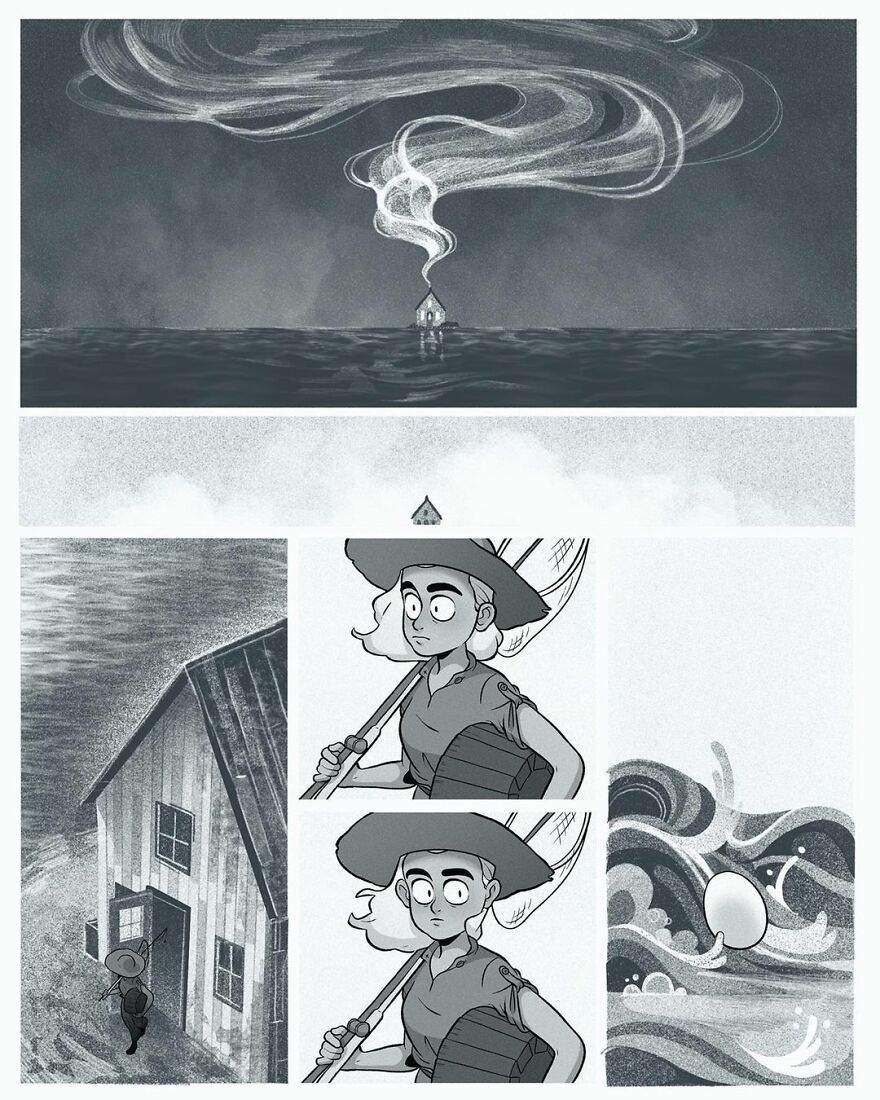 Surprisingly, she found a baby in the shell. 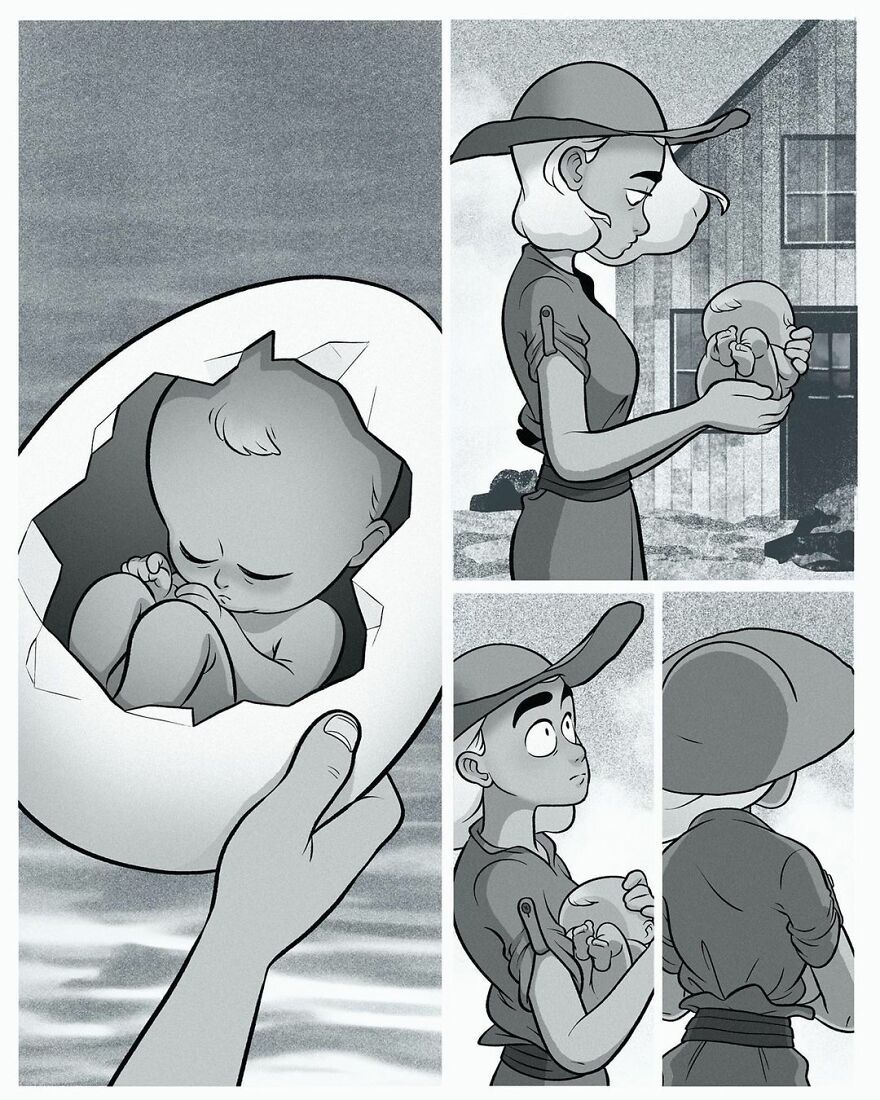 And so, a new chapter of the island began. The End! 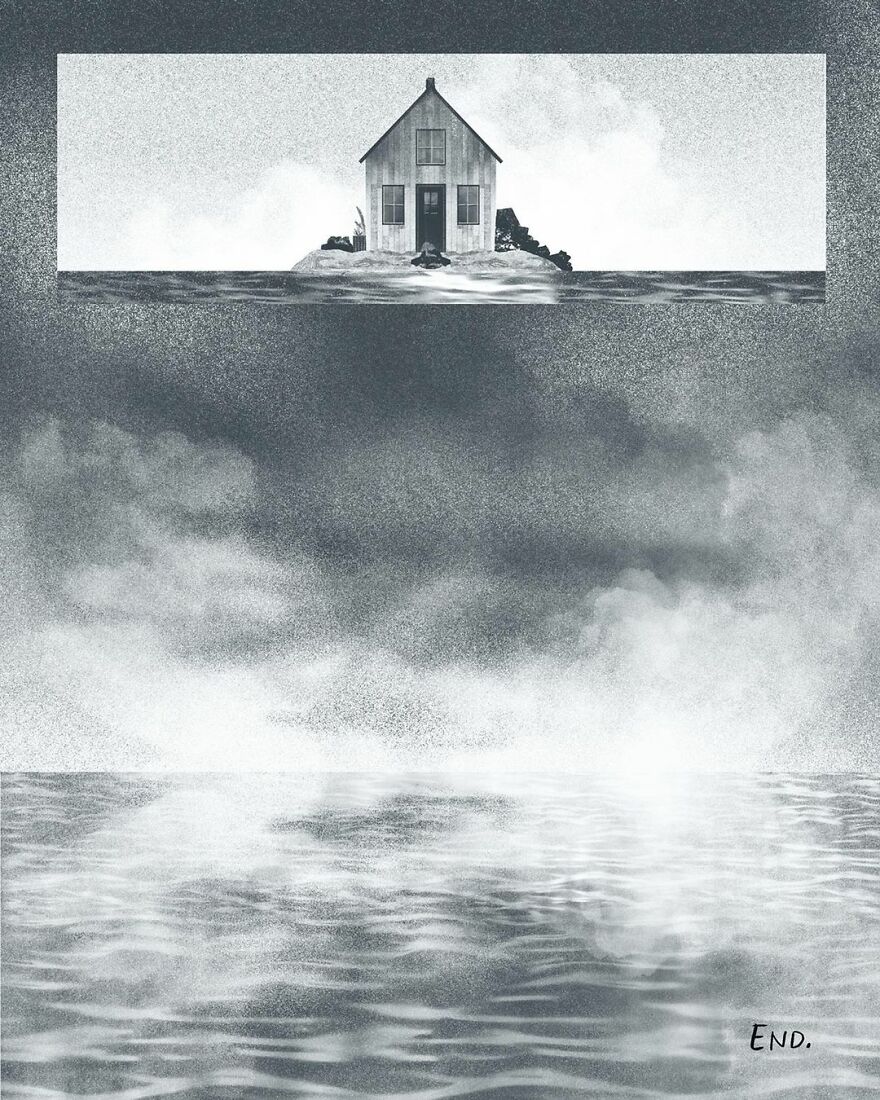 This comic about a spooky island illustrates the story of a young girl and her mother, who live all alone in their house on an island. The mother has warned her daughter about the sea and to never ponder over what lies under its endless depths and far-reaching waves. Until one day a major turn of events unveils the secrets of the big blue sea in a unique, mysterious way. Leaving the daughter with a huge responsibility she now has to fulfill.

2. Strange Door: This comic is worth reading!

This couple bought a new house.

A strange hidden door was discovered by this couple behind the wardrobe.

Obviously, there must be a deeper meaning behind it.

Everyone on the street was a lefty!

It was as if everything had flipped.

Eventually, the couple gave up using the mysterious door. Wait! There was more to come in this tale.

Until one night, something unexpected happened.

But nobody was there.

Fortunately, it was just his wife. But wait! It seems like there is something wrong with her.

Everything was fine until he noticed his wife facing trouble eating with her right hand.

This comic is about a couple who just recently moved into a new house. Shortly after they had moved, they had found a mysterious door in their apartment, hidden behind a wardrobe. Upon opening the door they find out that there is nothing seemingly wrong with the door and it just leads outside their house. Considering it just a simple backdoor with no cause for concern, the couple was relieved. Until they find out something peculiar about the world that lies outside the strange door. This odd world, with an odd alteration, soon brings a peculiar and creepy change in the couple’s lives that makes them question the fabric of reality and their trust in the other’s identity.

Her job didn’t have a single tiny spark of glamour to it.

Until she found an online pizza order.

Because the address was two blocks away, the delivery guy was baffled.

The pizza was ready to be delivered.

Argh! Within a few minutes, the delivery man suddenly appears. He made a delivery request, but no one answered the phone.

So, they decided to enjoy the Pizza themselves.

Time to go back, the workers have all gone home.

This is where the story takes a turn.

House No. 23, the same house that ordered the pizza with Salami, Olives, and Sausages – SOS “Save Our Souls”

This comic is about a peculiar order sent to a pizzeria employee that she couldn’t make sense of. While working her night shift at the pizza place, as she pondered over her due rent, the employee received an online order for a pizza containing salami, olives, and sausage, to be delivered to 23rd South Street. The delivery man found the close proximity of the order weird at first but, satisfied with the added delivery bonus they went through with the order. At the location, however, nobody answered the door to receive the pizza and the customer didn’t pick up any calls either. Later at night, when the employee is on her way back home after her shift, a surprising turn of events reveals the true reason behind the peculiar pizza order and the reason no one came to receive it.

Are you someone that enjoys spooky stories? If yes, be sure to tell us how you feel about these beautifully illustrated creepy short comics by the creative mastermind, Adam Ellis, whose work is not only enriched with interesting plots but also visually appealing graphics. We would love to hear your thoughts on them in the comments section below!