Who would be heartless enough to hate a dog?

Well, apparently this pregnant woman. Don’t get me wrong. I am well aware that not everyone likes dogs. For example, I find them adorable, so it is unfortunate that I am afraid of them. However, most people who aren’t big fans of doggo’s won’t actually try to harm them in any way no matter what. But this woman tried to do just that. And to make matters even worse, it was her sisters lovely dog.

Not only is she pregnant and doesn’t have a place to stay. But even when her sister was kind enough to offer her shelter in her home, the sister decided to take advantage of that and asked her to get rid of the dog. If she was allergic or something like that, then it would have been a tiny bit understandable, but she just doesn’t want her baby to grow up around a ‘wild animal’. If this isn’t the definition of entitlement, I don’t know what is.

They don’t even have a great relationship, but the sister was still willing to help her. 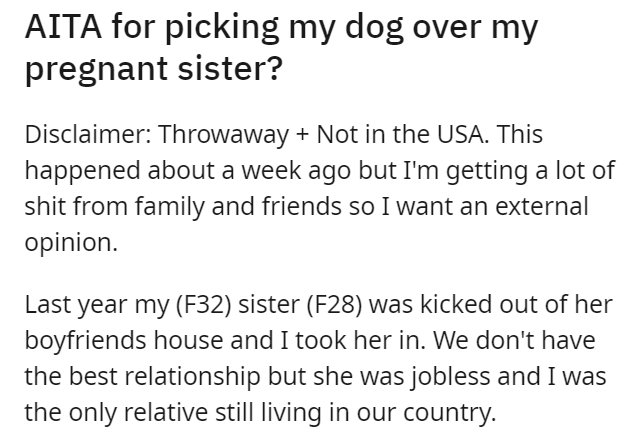 Just because someone is family doesn’t mean they can butt into anyone’s business. 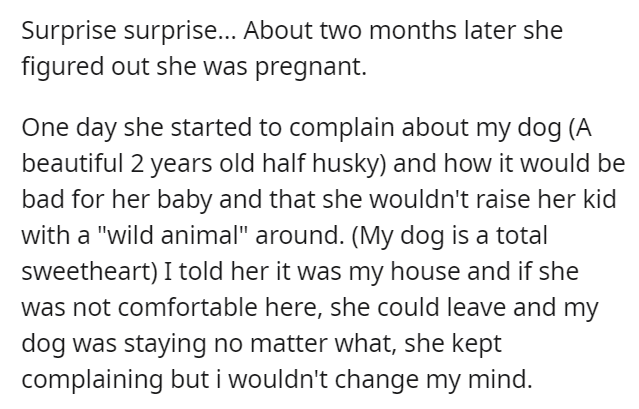 If she didn’t like the dog, she could have just moved out, but she decided to do something drastic. 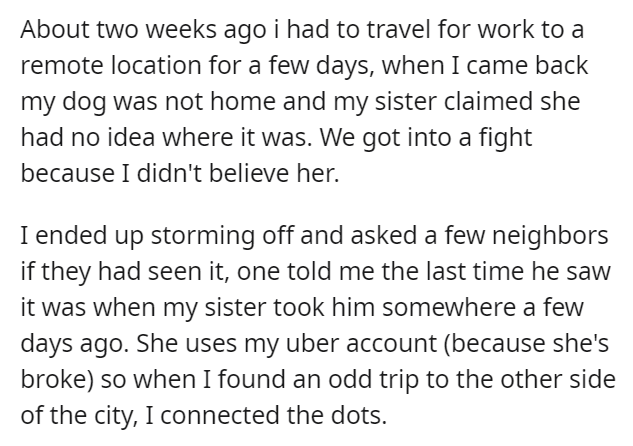 Honestly, I would be quite furious as well in this situation. 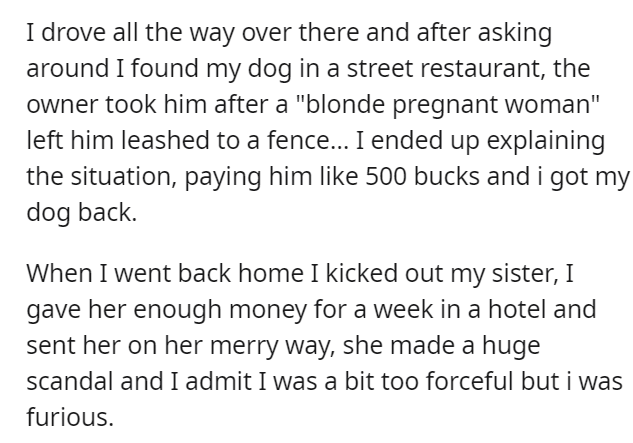 It’s not about picking an animal over a family member.

The sister clearly showed that she doesn’t care about anyone else but her. And her being pregnant has nothing to do with that.

We also have an update with a bit more information.

We all like to think our family would never do something like that, but then they change your mind. 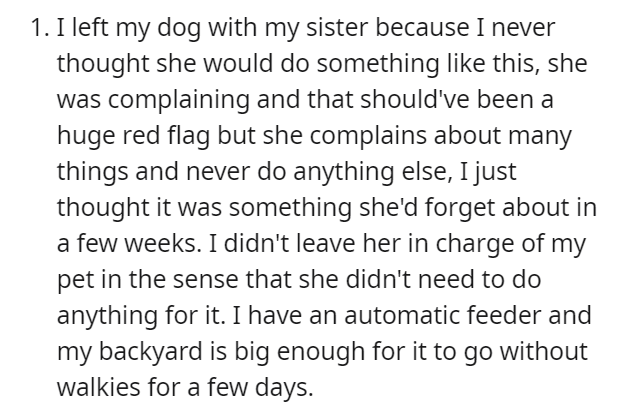 There are many countries where animals aren’t protected at all. 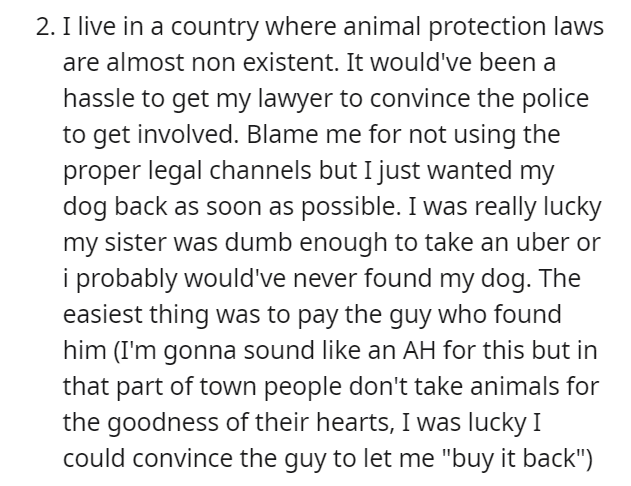 But even after all that, she still gave her a bit of money which is more than what I would have done. 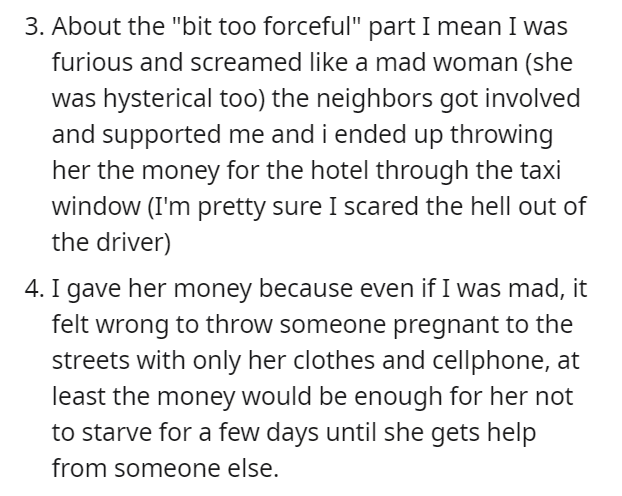 This was absolutely the right choice.

She needs to deal with her problems by herself now. 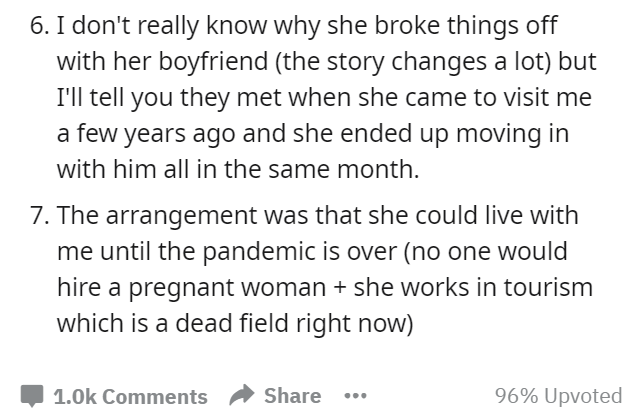 I think I may be the a**hole because I kicked my sister out (knowing she’s broke and pregnant) because she abandoned my dog. I can’t find it in my heart to forgive her, but I may be an a**hole for not trying to accommodate to her fears.

And the dog was here before the sister even entered the house. 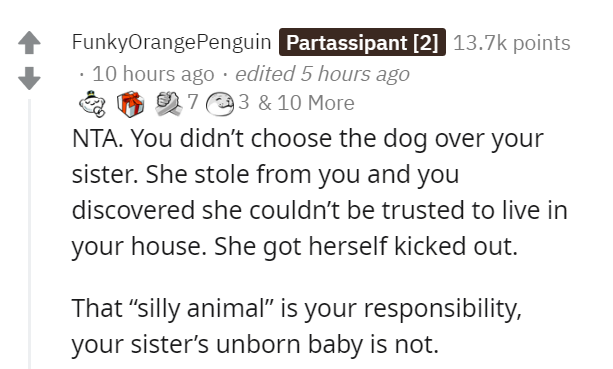 She should have been thankful. 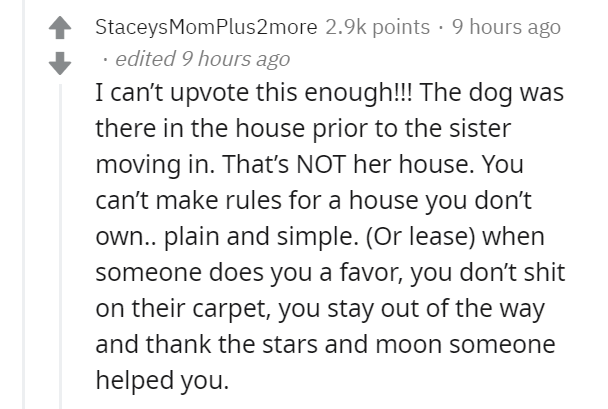 You are 100% NTA. Your sister is a spoiled brat-thief-animal abu*er and can NEVER be trusted in your home again. No second chances! I can’t emphasize this enough. For those who call and berate you, ask for their address so that you can Uber your so-called sister’s sorry ass over to them.

That dog is your family! Imagine the confusion when the dog found himself with a total stranger for several days! Imagine the trust that the poor dog had to get into a car with this thing that pretends to be your sister! Seriously – no contact and be prepared for the kid to be dumped on you. Or perhaps chained to a fence at a restaurant across town. –MaineGirl_1923

She didn’t ‘give the dog away’. She basically tied him to a fence and left him there. 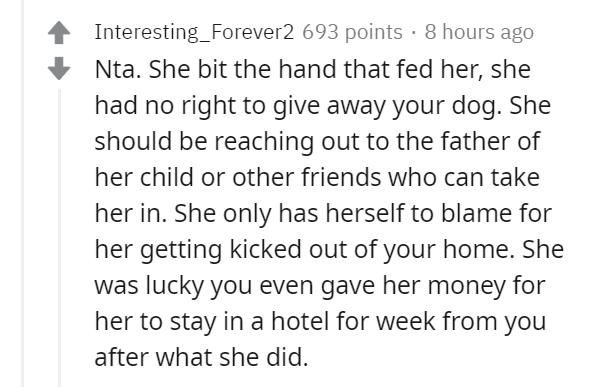 What would you do if your sibling did something like this? Comment down below and let us know.