There are some rich people who treat other people like they are garbage, and only because they make less money are some of the worst people in this world. When redditor u/NoTGoingThank was invited to go to Cabo with her boyfriend’s family she did not expect what was about to happen to her. She was humiliated by her boyfriend’s mother because she belongs to a blue-collar background. Luckily, a stranger gave OP the encouragement she needed to break off the toxic relationship.

Keep on scrolling down below to know the full story. We are sure that you are going to like it. After all, money is not everything, there are certain things that cannot be bought.

1. The boyfriend’s mother has a pathetic thinking 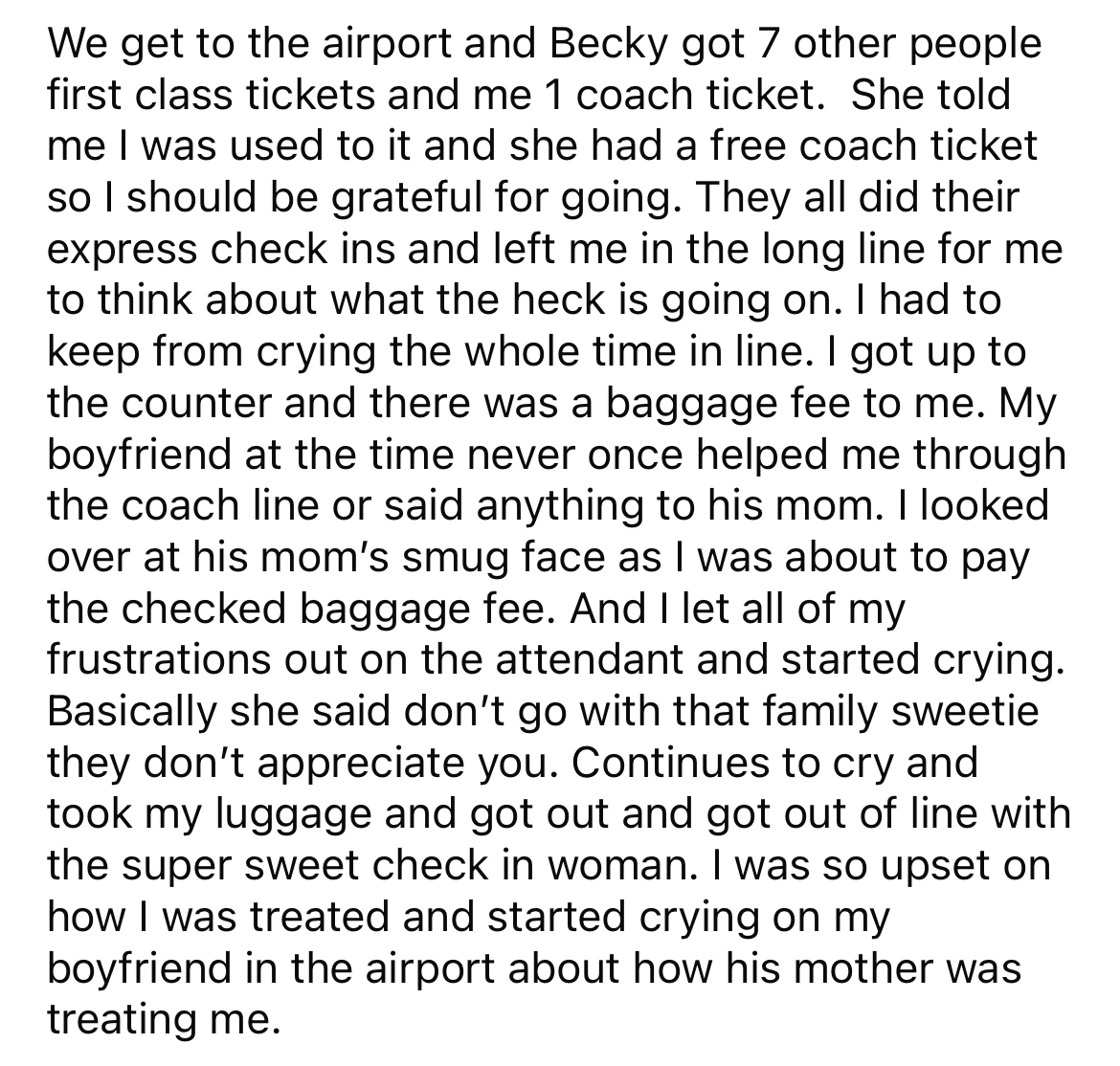 3. She dodged a huge bullet

Here comes the comment section and surprisingly everyone supported OP and told her she was definitely not the A-hole.

“NTA, the check-in lady was correct.” Said u/Complex-Lemon-371. “If you would have got on the plane, you would have been treated like this for the entire vacation. It was absolutely the right decision to stand up for yourself. As far as wasting money, she said the ticket was free and I’m sure she didn’t spend much on your hotel accommodations. As far as wasting time, you wasted enough of your own time on a relationship with your boyfriend if he isn’t going to stand up for you. They are going to say that you should be happy for any kind of vacation and not look down on a coach ticket, but his mother was being pointedly rude to you.”

“I love this reply.” u/lasenorarivera chimed in, “And I’m glad OP didn’t put up with it. Life’s much too short to associate with people who want you to eat s*it and pretend you like it.”

u/yet_another_sock took the opportunity to give props to the sweet airport check-in worker. “Goddamn, I hope nice things happen to that check-in lady. Public-facing airport employees are one of the professions that’s really been made to eat shit in the last couple of years, and the fact that this person still has the bandwidth for a life-changing amount of compassion is super impressive.”

4. Some of them were against OP

“NTA!” Declared u/mumismatist, “The fact she got seven (7)!!! other people first-class tickets and yet magically the budget ran out when it came to you tells you everything you need to know OP. Boyfriends mom was pulling a most assholish power play on you, indirectly saying you’re not good enough for the family by directly refusing to let you fly in first class with them…I bet she thought she was so damn smart with that move lol. The fact that boyfriend didn’t even speak up once in your favorite shows that he’s so deep in mommy’s back pocket that he’s either willfully or unknowingly refusing to recognize her appalling behavior and that’s a major red flag as well. As in run for the hills red flag. You’re on the ground right now, but in the future, you’re free to soar and find someone far better than a spineless momma’s boy and his garbage family.”

“NTA. Repeat after me: Cash (or plane tickets) does not buy someone the right to be cruel, abusive, or controlling.” Said u/Comprehensive-Poet82.

5. This user is speaking facts 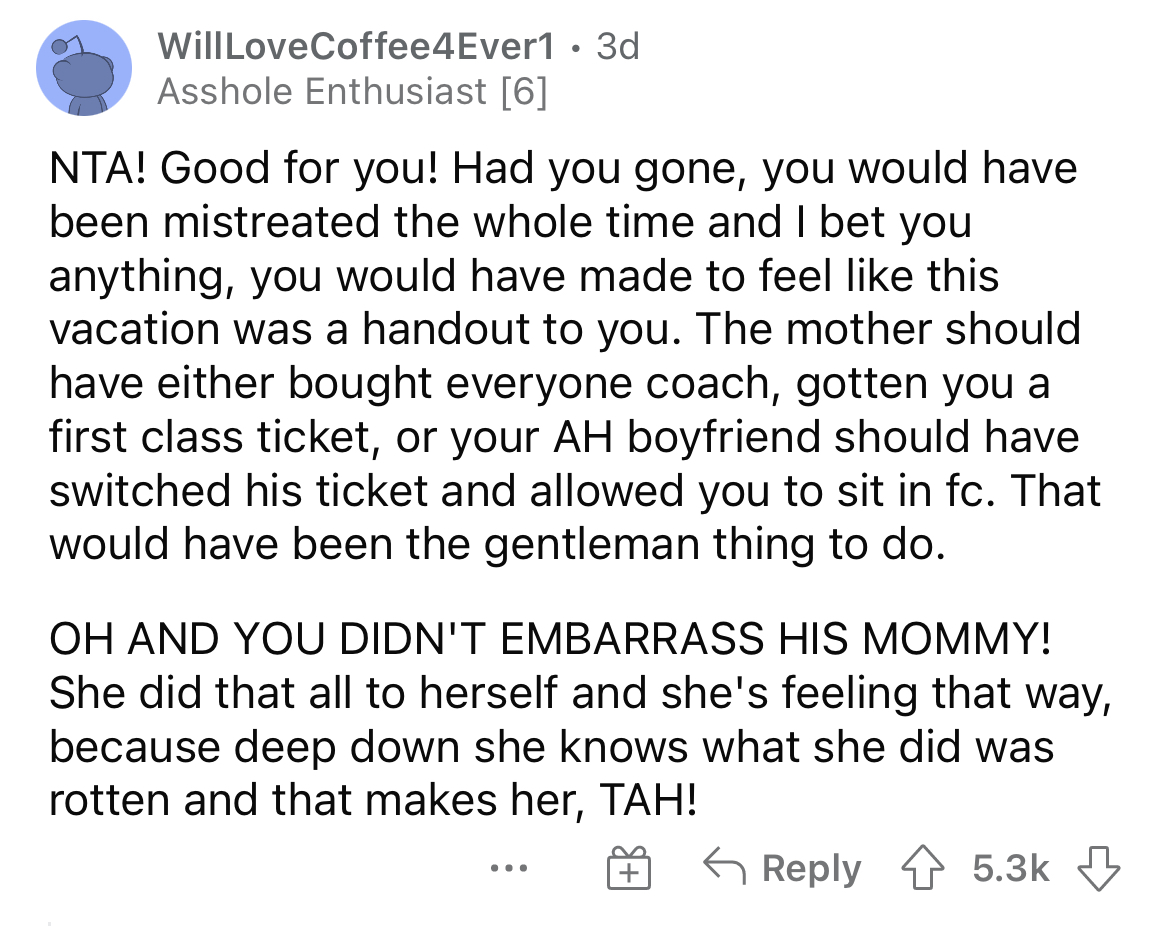 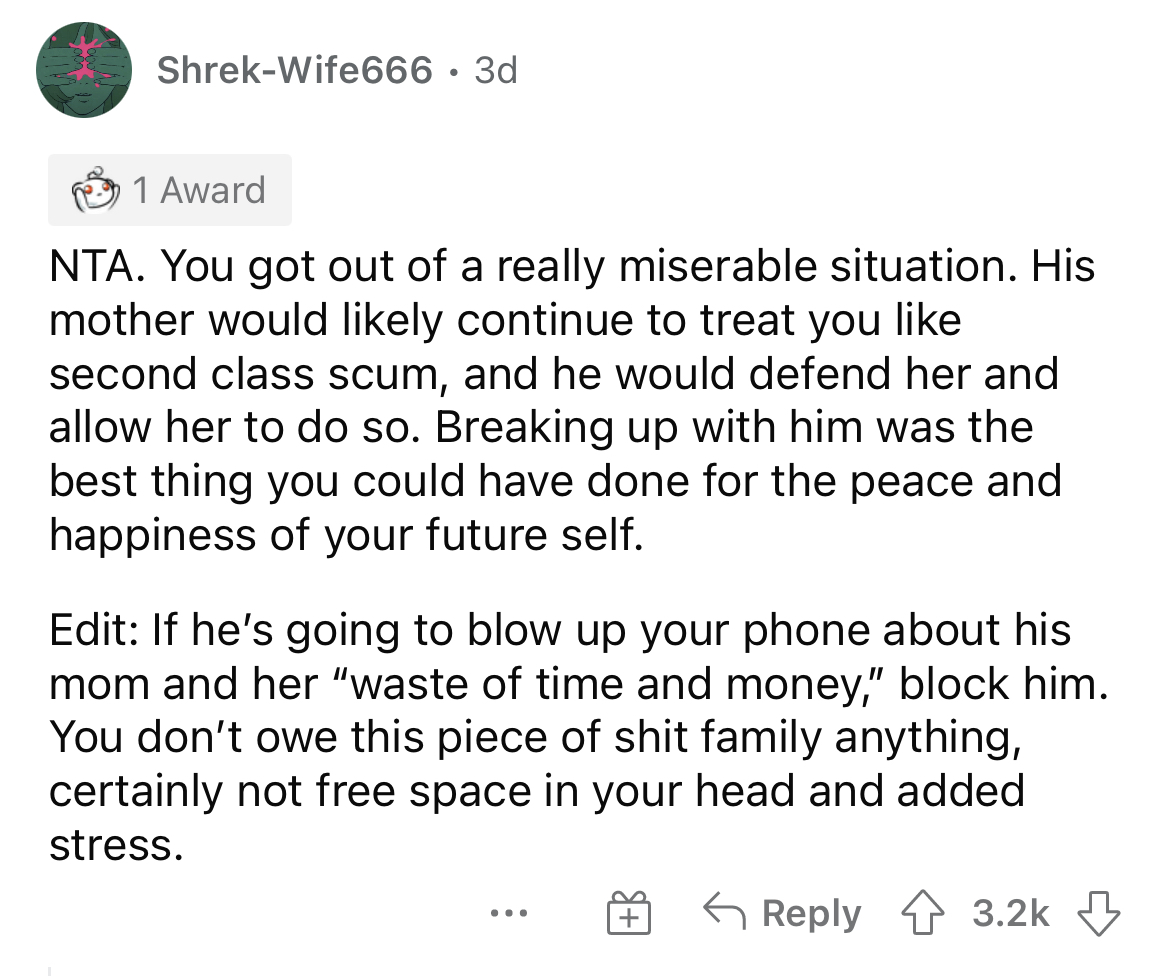 It was obvious that the boyfriend wasn’t worth the tears. Her mother completely got unethical and humiliated for no reason. OP is definitely NTA. We are thankful to God that she met that attendant who told her about her worth. Let us know what do you think about this post in the comment section below. Don’t forget to like and share it with your friends and family. Stay tuned with Defused for more fun content. Thank You!.