People really ought to brush up on their law.

I am well aware that not everyone is a lawyer, but that doesn’t mean you don’t know basic things. Even excluding the law, just acting like a decent human being means that you won’t get into any problems. However, most people don’t really understand this simple fact. We all know parking in front of someone’s car and blocking them in is not really a thing that is recommended. I mean unless you want to get some sort of revenge on them, your car just might get towed.

And that is exactly what happened to these people. You see they parked in front of someone garage. In their defence, the house had been empty for a long time, and they thought it was okay. Although they knew that the property was now in use, so I really can’t see what they thought this would accomplish. After all, no one has time to knock on strangers doors and ask them to move a car that might not even be theirs.

So it really is the icing on the cake that the neighbours would get angry just because their car got towed when they should have expected this in the first place.

There is nothing particularly wrong in parking in front of an empty house, but they all stopped when someone moved in there. 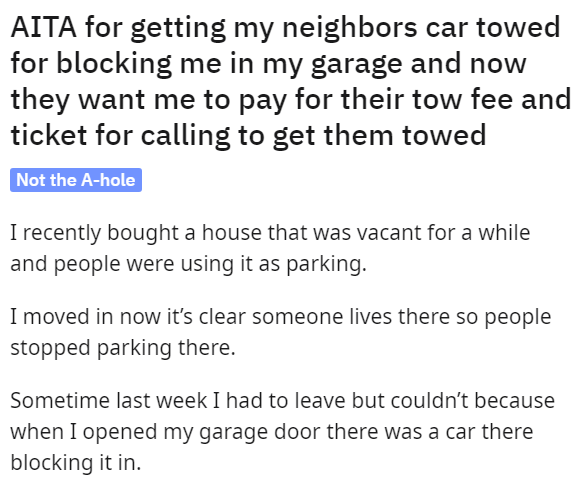 Well, almost everyone stopped other than one person who thought they could get away with it somehow. 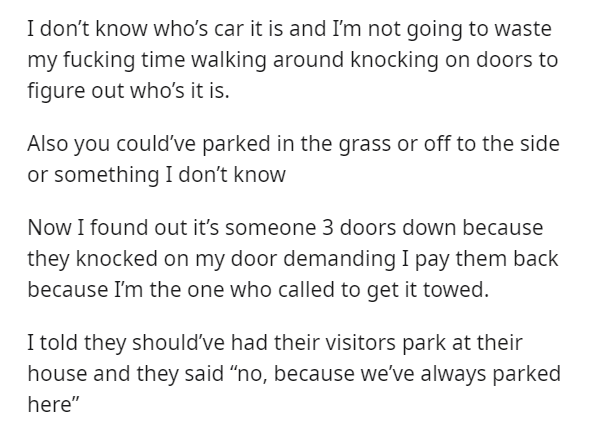 If they didn’t want to pay for a fine why did they park in front of someone garage in the first place? It makes no sense if you ask me. 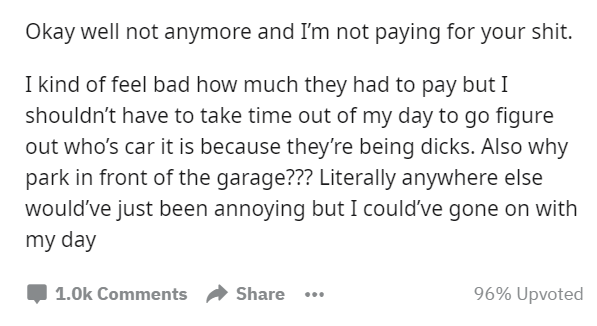 NTA. I had the same issues with my neighbours. My house has never been abandoned, but they loved having many people over. As a result, the outside of my garage was constantly used for their overflow of people. Many times I would be nice and kind to ask them to move. I would sometimes wait 10 minutes. The last straw was me asking them to move, and they had an attitude and yelled they’d be there in a second.

That’s when I had to cut it off and warned them any future parking by my garage would equal me calling the tow truck. They never parked there again after getting towed. Yes they never look or speak to me again, but I have full use of my garage back. Moral of the story, f**k these types of people and nip that shit in the bud early. –freddiemercuryisgay

Most people don’t need a sign to know that this sort of behaviour is 100% wrong. 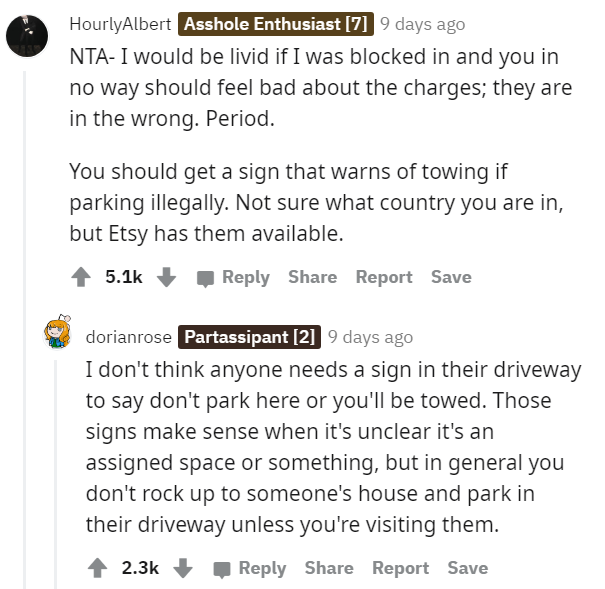 That is one way to do it if you don’t have enough space for your guests.

You have to wonder what was going through their mind when they thought of doing this. 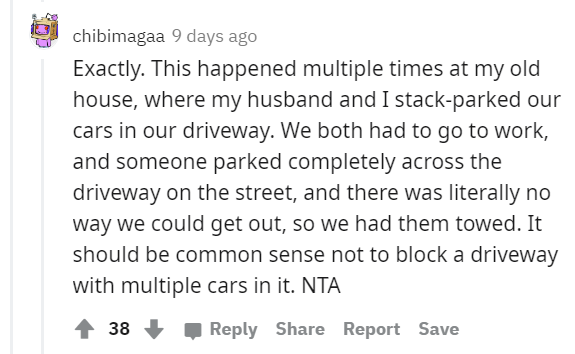 Perhaps they thought he was some sort of physic? That does stupid, doesn’t it? 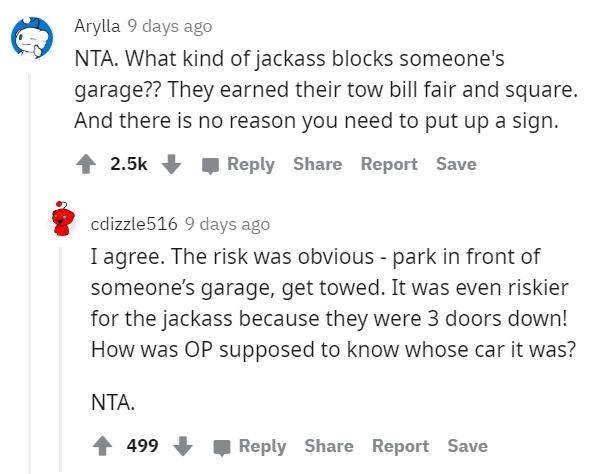 Just because you have always done something doesn’t make it right. Surprising right? 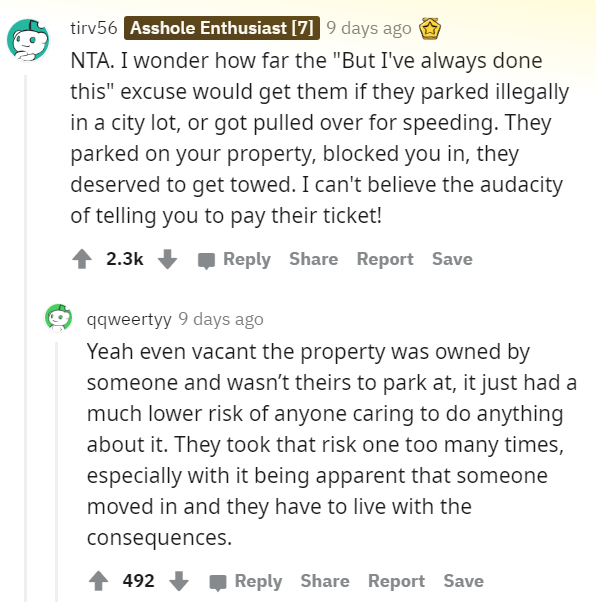 Apparently this excuse does work in some cases, but it thankfully didn’t in this one. 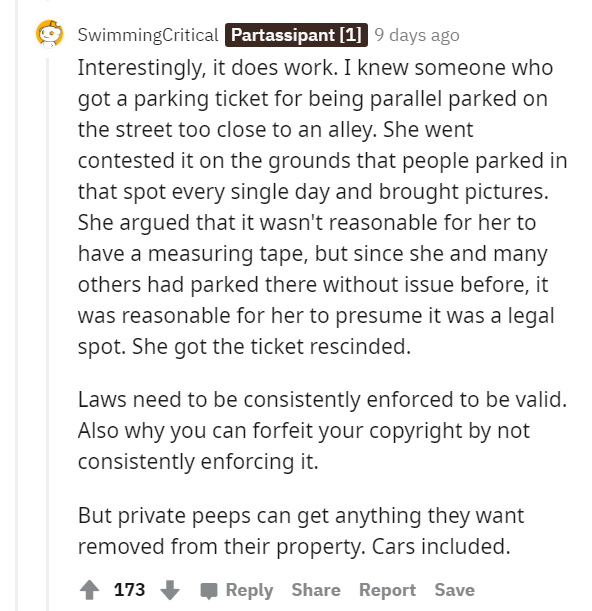 Had the same thing happen when we got a house that had belonged to family members of the people across the street. We had a driveway on both sides of the house, and they would always park in the second driveway which drove me insane.

Also, my first day there the lady across the street had the audacity to park behind me when I parked in the carport. I had to go knock and wake her up to move her car when I needed to leave, and she acted like I was the asshole. She could clearly see my car and didn’t know me. Why would she block someone in like that is beyond me. –Forestlightstar

What I can see from all the comments is that a lot of people do this. 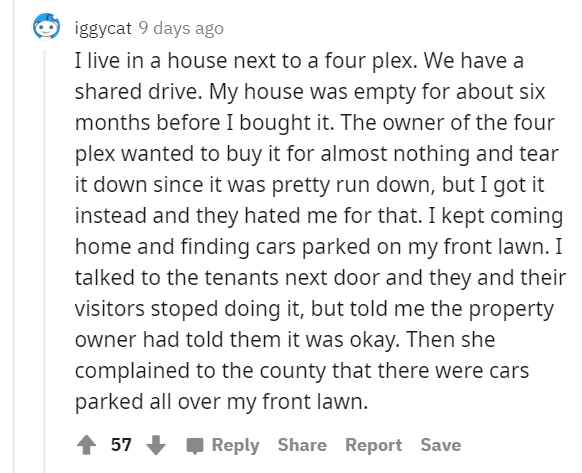 That i what we would like to imagine, but I bet their friends would agree that the neighbour should have asked around before getting their car towed. 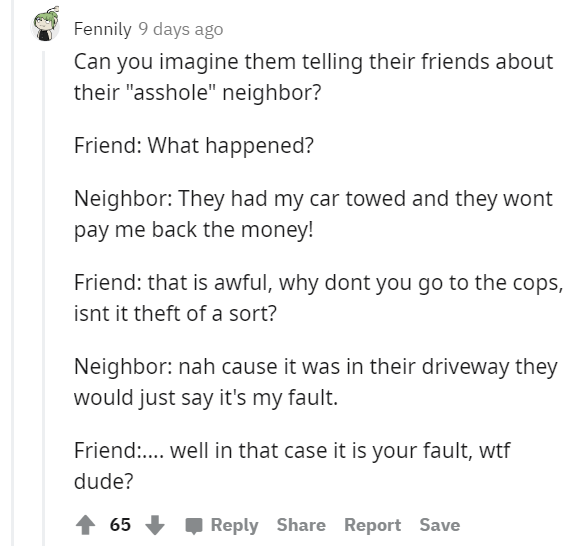 Only some days? I can never understand peoples thought process. 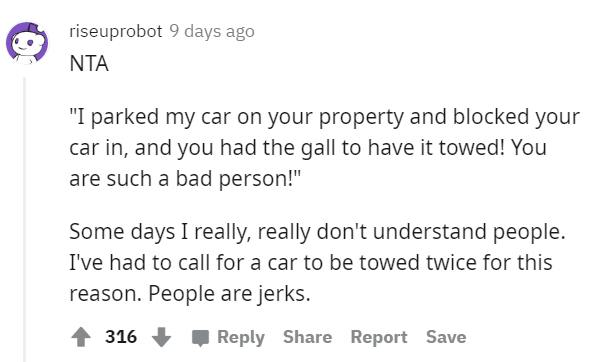 Just don’t do it in the first place. It really is that easy. 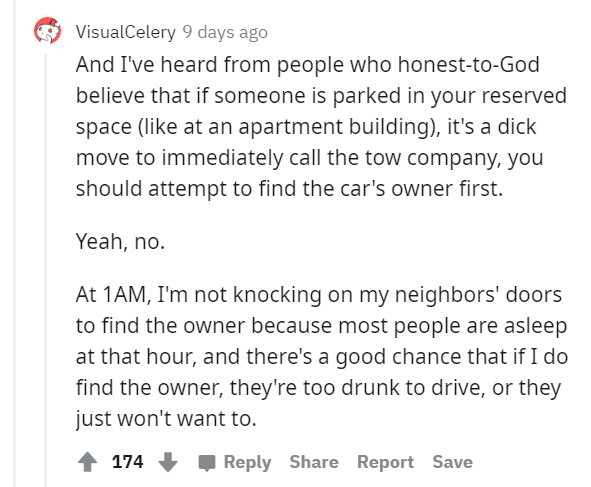 How would you have dealt with this situation? Would you have towed their car or asked around first? Comment down below and let us know.