A little bit of kindness can mean a lot to someone.

When we are growing up, we want to make the world a better place to live in. Our parents taught us to be kind and compassionate towards people. Their teachings wire our brains and we find ourselves helping people without thinking too much about it. It just seems like the right thing to do. Whenever we see someone in trouble or someone who is less able than us, we do our best to make their situation easier for them. For example, if an old man is trying to cross a busy road, people will rush to him to help so he can cross it without being harmed. Similarly, if a pregnant lady is standing inside a bus and no seats are available for her, you would offer her your seat since it is the morally right thing to do. However, not everyone was raised right or share the same morals.

This man on Reddit asked the internet if he was wrong for not giving up his seat for a pregnant woman. He shared the entire story, explaining his reasons for not doing so. Scroll down below to read the whole story and decide for yourself whether he was right or wrong.

He takes the bus to work since his car got totaled recently. Due to social distancing, the seats on the bus are limited. 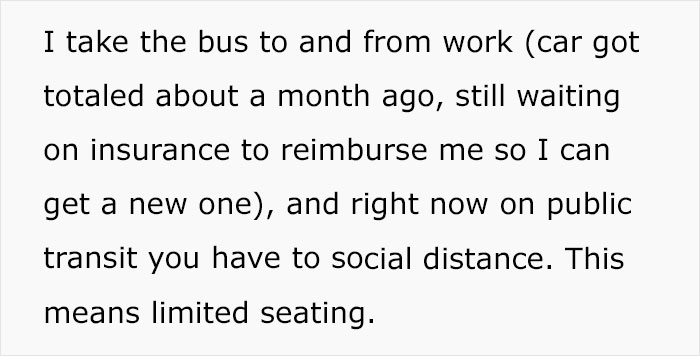 The guy explained that he works 10-hour shifts and is on his feet all day. 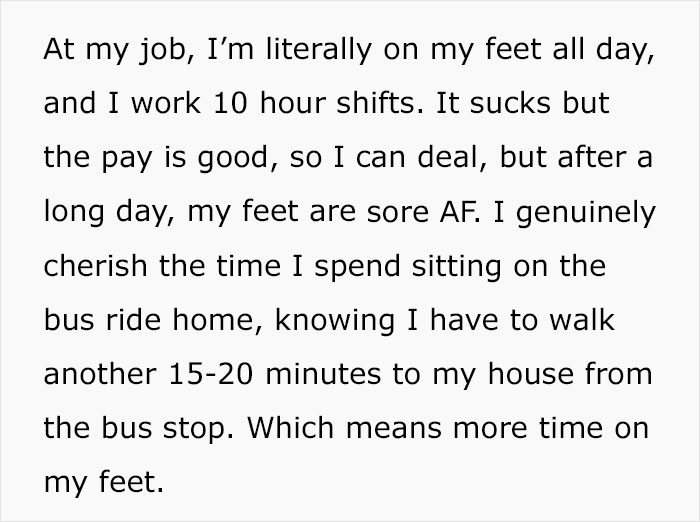 Then a heavily pregnant lady got on the bus and saw there were no seats available. The man tried ignoring her but couldn’t as she started speaking to him. 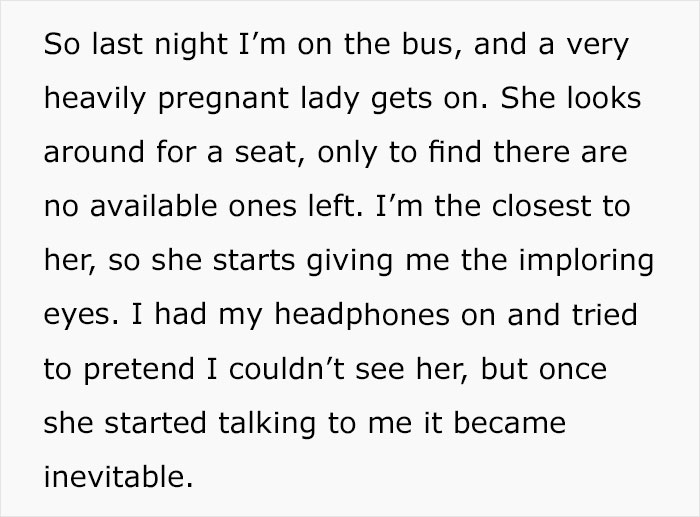 He refused to give up his seat after she asked for it. He told her it was her own personal choice to get pregnant. 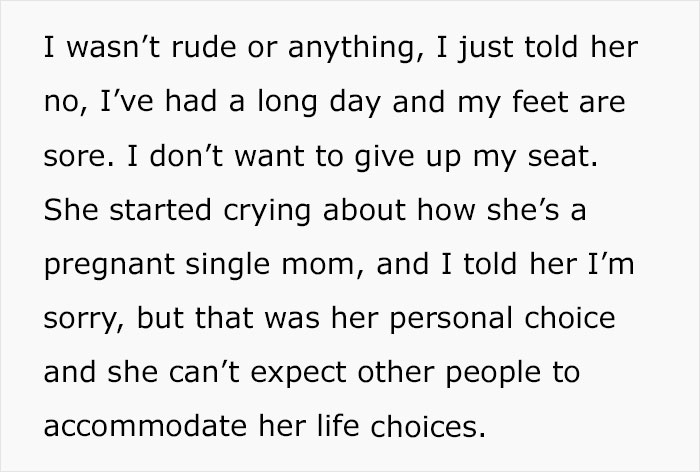 He said it wasn’t his fault she decided to have a baby when she couldn’t afford a car.

After a lot of arguing, an old man offered his seat to the lady and called the guy worthless. 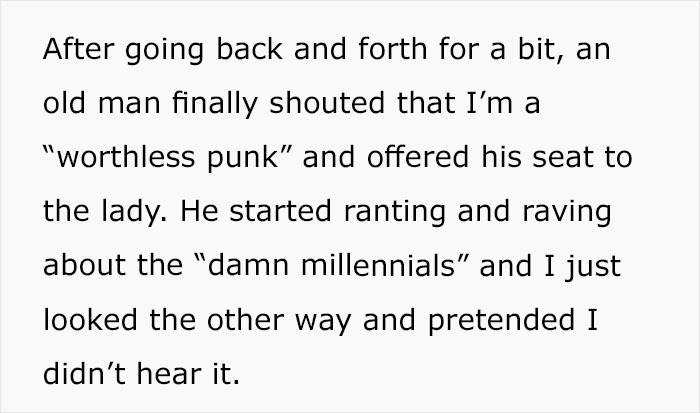 While trading seats, the bus driver slammed the brakes, and both the pregnant lady and old man fell. They started yelling at him but he ignored it.

He got home and told his family the entire thing, and they bashed him as well. However, he still believes he did the right thing. 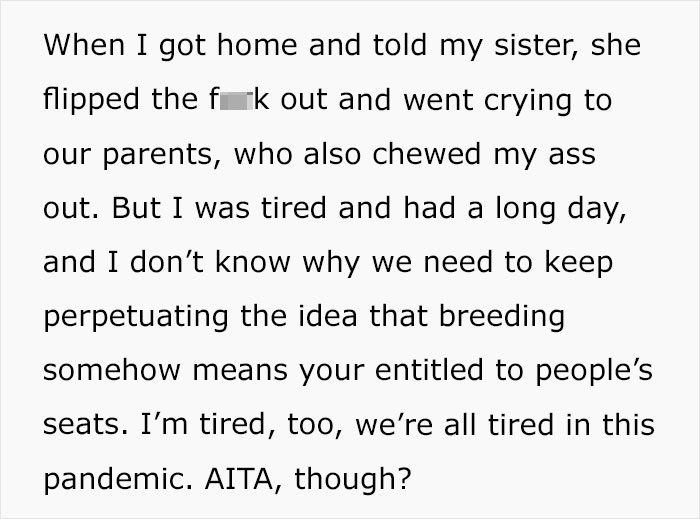 It is understandable that the man was tired. Working 10 hours while standing the entire time can really make your feet hurt. He could be tired enough to cloud his judgment but that still isn’t an excuse to treat someone badly. It doesn’t take too much effort to be nice. It was just one bus ride, and I am sure the pregnant lady would face more serious consequences of standing up the entire trip. It isn’t just about being kind or doing the morally right thing, a pregnant lady is at great risk if she is standing in a moving vehicle. Why would you want to potentially harm someone when you know you can help them with just a small gesture? 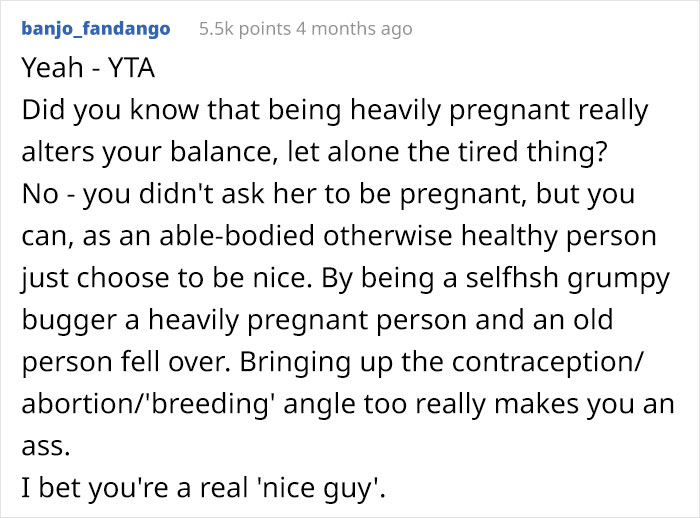 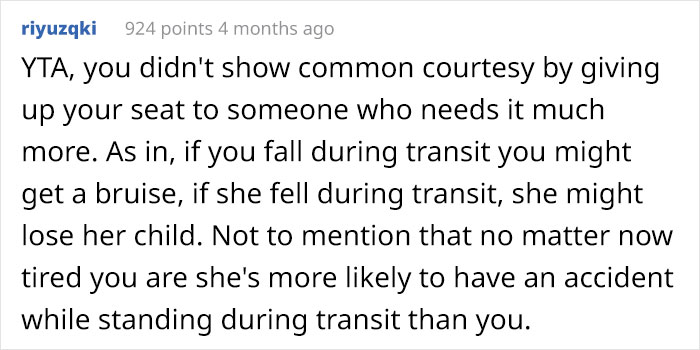 Everyone said the guy was wrong.

The guy did show a lot of disgust towards the pregnant woman.

This man does not have any empathy.

Other than the old man who offered his seat, everyone on the bus needs some lessons on manners. 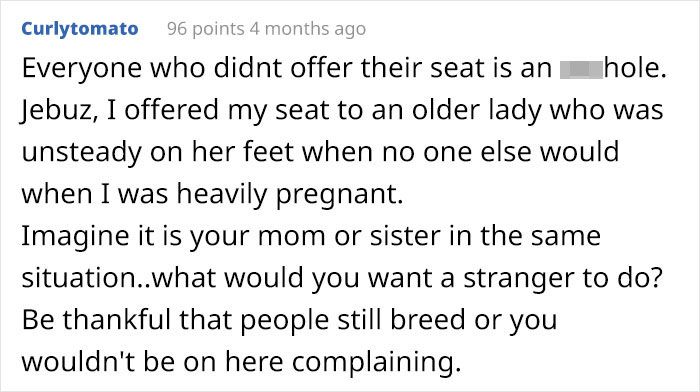 This guy really needs to be put in place.

It isn’t that hard to be a decent human being.

What do you think about this story? Do you think the man was wrong for not giving up his seat for the pregnant lady? Share your opinions with us in the comments below.