With more people being part of the feminist movement, we have seen huge numbers of men coming to bash the movement too. We will be highlighting an example of such men today. A misogynistic Tiktoker posted a video claiming he knows the “truth” about why beautiful women are single. Guess what he blames it all on? Feminism.

Anyone close to the movement knows what feminism stands for. We know that feminism focuses on women’s liberty and their freedom from the chains of society that hold them back. Feminism has been able to empower a lot of women and break them free of societal constraints that held us back for years. The progress women have been up to this day would not have been possible without feminism and the struggles of our mothers.

But of course, there are many people, especially men, who misunderstand the purpose of the movement and live at the expense of women’s oppression.

The user heartbreaknino617 posted a video on his TikTok account claiming that the reason why beautiful women are single is their involvement in “feminism”. He believes their relationship status is related to their values and ideologies.

This video was viewed over 2.5 million times. Its views increased to 6.7 million after the user @princessjahadd shared it on their story calling it “… this scary asf”. We think so too @princessjahadd, we think so too! Most of the people who watched the video disagreed with the guy and bashed him for his absurd views.

Read his statement below!

It should not come as when we tell you that all his videos are based on trolling women and suggestions to be “better women”. He talks about how women should be obedient and subservient to their men. He claims men earn for their family and women, which makes women their subordinates. Women should compensate for a man’s labour by obeying his command and wishes. How pathetic does this man have to be?

He believes that feminism has filled women’s heads with lies and fairy tales. According to him, feminism uplifts women and misguides them. He thinks that due to feminism, women have become full of themselves and consider themselves “God’s gift”, queens and prizes.

It seems like someone’s misunderstood feminism. But given how rigid he seems about his sexist and discriminatory suggestions towards women, it appears that his pea-sized won’t understand feminism even if someone gives him a 6-month course on it.

He added that women are not the “queens” they think they are because they are not his mother. Wow, what a good comparison?

The problem with such men and people is that they fail to educate themselves about the feminist movement. They fail to take time out of their busy day, which is mostly spent on putting women down, to google the history behind feminism.

The TikTok added to his statement that no woman will get the respect and love his mother gets from him because no woman can ever love him unconditionally.

Why are romantic partners even made to compete with the standards your mother has set as a parent? This is what should boggle you about men. Why do they want their romantic partner to be like their mother? It shows their need to be pampered and babied. This man is basically a man-child.

Here comes some more of his misogynistic views! He thinks that because men are the “breadwinners” of the house, women should submit to them as subservient. 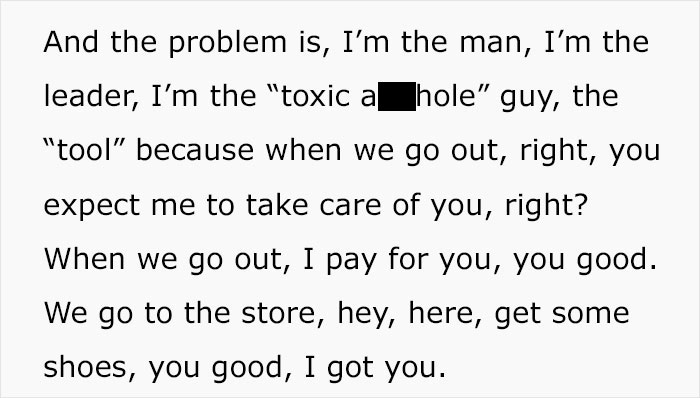 He believes that because a man earns for the woman and his family, he also earns the right to order the woman as he pleases. This shows his need to control women using material means. He is under the impression that having possession of material means makes you have power over other people. He thinks it allows you to dominate over others. This shows signs of manipulative behaviour, where he could potentially control any woman he provides for, to do whatever he asks her.

He ends his video by calling women “delusional”. 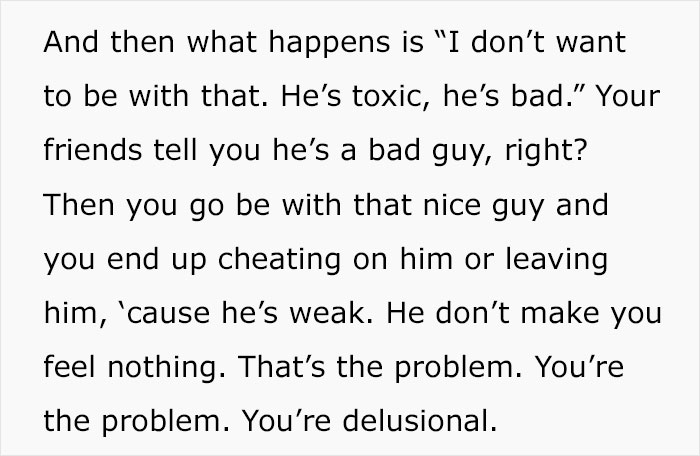 Here it comes! Every guy has to end his argument against women by referring to women as “cheaters” who leave them for a “nice a guy”. He adds, “Then you go be with that nice guy and you end up cheating on him or leaving him, ‘cause he’s weak. He doesn’t make you feel nothing.” It is so typical of them. Women’s issues are so severe. They range from wage gaps, harassment, abuse, marital abuse, sexual and physical abuse, lack of education, lack of mobility and so much more than hold so much gravity. Meanwhile, a man’s greatest issue is a woman betraying them. We’re not saying that is not hurtful or does not shatter you, but it is important to acknowledge what grave issues women have to deal with that men cannot even fathom.

You can check the video he posted below!

Feminism centres around the idea that society is structured in a way that institutions and structures that exist, work at the expense of women. Society is patriarchal and oppresses women, their mobility, their liberty, and their freedom. Men are uplifted at the expense of women and women are made to be subservient to men. Society and men benefit from the labour and their efforts of women. The focus lies on eradicating the mindset and the structures of society that think of women as lesser beings and oppress them.

If you thought this was the only video he posted against women, you were wrong. His TikTok is filled with similar content.

This video got a lot of comments and most people disagreed with his absurd views.

Some people alluded to how his words show signs of future abusive behaviour.

People were furious with what they were hearing and could not believe someone actually has such views about women.

Someone also linked it to the Oedipus complex!

Could not agree more!

Yes, feminism uplifts women and empowers them by making them realize their strength and individuality, but it comes with acknowledging the history of discrimination, abuse, and injustice women have faced at the hands of men and the patriarchal society. Women have been made to feel incompetent and worthless for too long, and women need to unlearn what they have been taught and uphold themselves. The Tiktoker is mistaken about one thing. He seems to be under the impression that women demand superiority, which is false and a misconception about the movement.