The conversation about equal distribution of house chores is never a pleasant one. It is a messy topic and couples always end up arguing about which partner is sharing the bigger load of work. It gets messier when couples end up weighing their earnings and who is bringing more to the table. No partner wants their efforts to be looked down upon. Especially when someone is investing more and their efforts do not get appreciated, it is not a good experience. This is something most women have to deal with in their marriages.

Similar is the story of Reddit User CommercialMachine98, who took her story on the internet about the huge argument she had with her husband over house chores. She explained the argument that went down between the two, on how her husband believes she is not doing an equal amount of housework as him. He felt she had less work at hand and more housework was thrown at him. The user mentions how her job is 7 days a week while her husband only works on weekdays. He gets the weekend off and has time to relax too, while she does not. Even though their work hours are not the same, she still helps with as much housework as possible.

When her husband expressed his thoughts about the situation, she was taken aback. She earns five times more than the guy. Yes, five times more! Despite that, and her hectic work schedule, she still plays her part in the house chores while he gets to relax on the weekends.  In an interview, Alex Scot, a self-love coach, said that it is important for cohabiting couples to share an equal workload at home.

It all began with the husband claiming the wife should take up more responsibility for housework.

She responded to this nonsensical suggestion by adding more housework to her husband’s share of work. 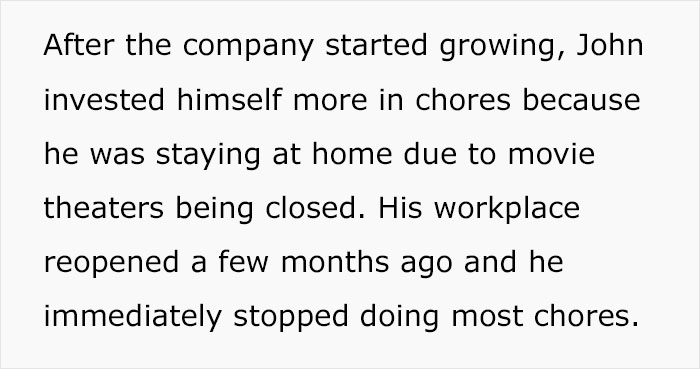 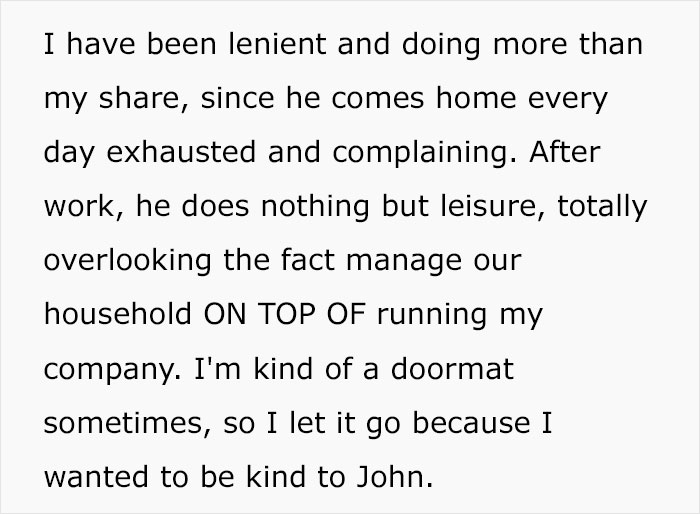 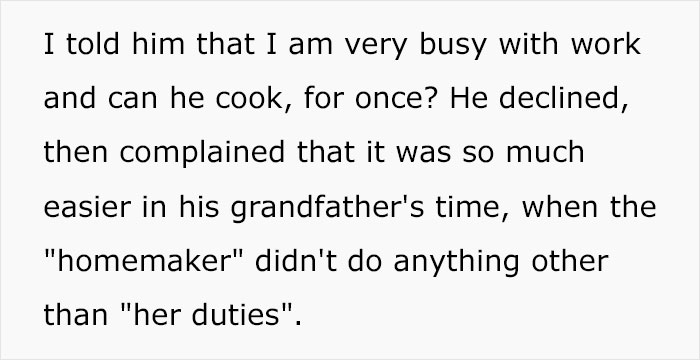 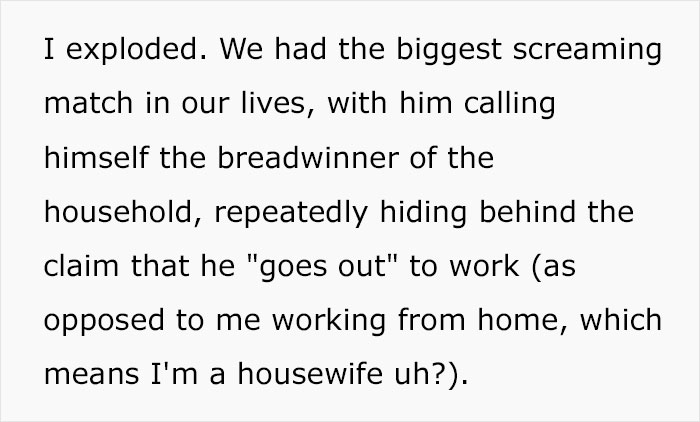 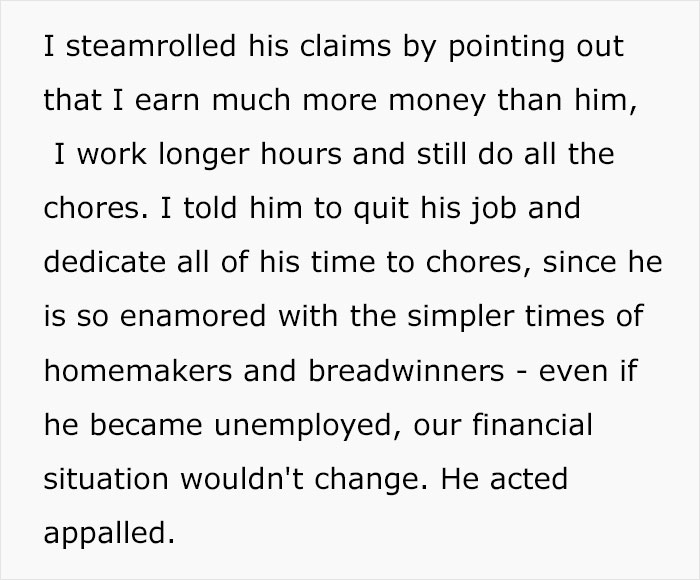 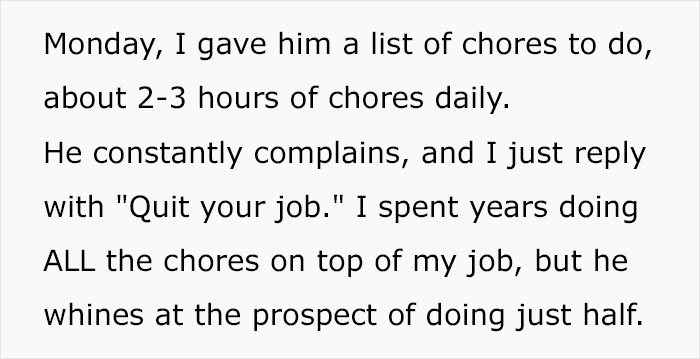 The fight escalated and she ending up locking his PS5 in a safe. Power Move! 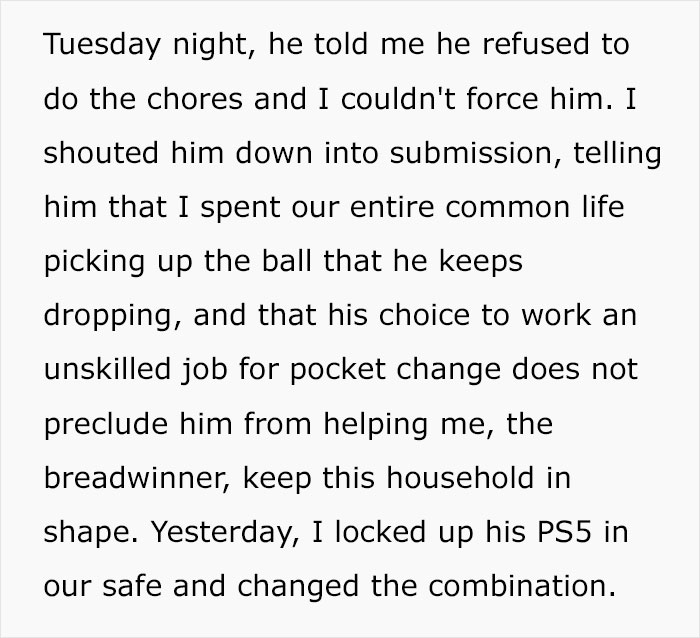 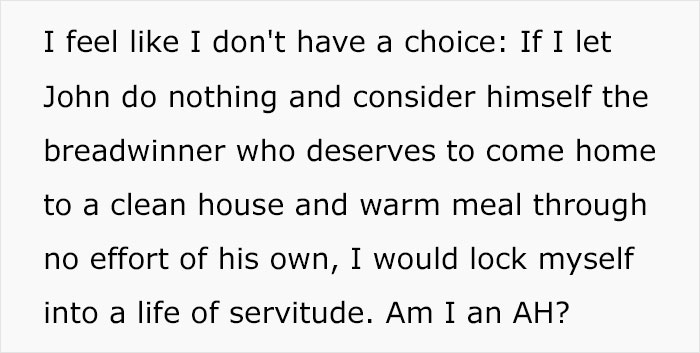 Alex, a relationship expert suggested that a possible effective method solve the issue of housework would be to talk about the chores each partner prefers. “For example, I don’t mind cleaning toilets but I hate vacuuming, so my partner is the one who vacuums and I’m the one that cleans the bathroom. For any chores that both partners don’t want to do, take turns alternating. This will vary from couple to couple but the goal here is to keep communication open, fair, and realistic for each other’s schedules,” she said.

He also added how to lessen the anger and frustration that builds up after an argument to remain civil and maintain respect between each other. “I recommend physical touch in the form of a hug or a 6-second kiss, the reason for this is co-regulation,” she noted

He defines co-regulation as: “[It is] how we self soothes as infants; a baby cries and a caregiver comes to cuddle and soothe the baby. As adults, co-regulation is very powerful and something we can use to our advantage. So even though you may not feel like hugging or kissing your partner post-argument, as soon as you can bring yourself to do so, go for it. Your nervous system will thank you as it regulates with your partner’s nervous system by sensing their heart rate and breathing.”

“I had been stewing in anger for days, and that is horribly unhealthy. And that anger is years of bottled feelings spilling up over something not worth that sort of reaction. I will sit John down tonight and have a long talk,” she wrote. “I will show him this thread and we will decide how we want to proceed. The people that we are now are so different from the people we were when we got married and we started dating.”

Many opinionated people in the comments could not believe the wife was putting up with her husband for so long. 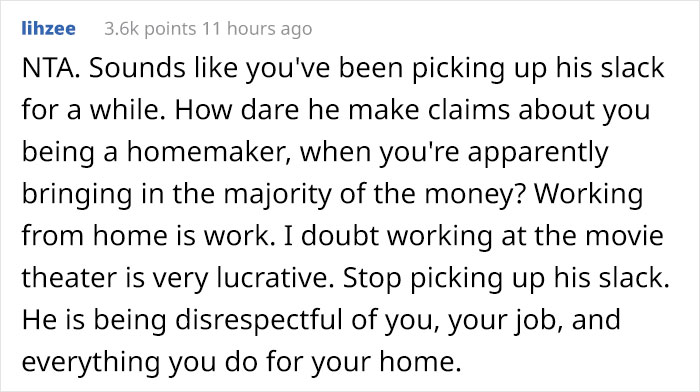 Dan Bacon, the founder of The Modern Man project, holds an important perspective on this division of house chores between couples. He believes it is necessary for couples to openly talk about this topic before it gets too late. When these conversations are made to wait, things happen which were never agreed upon, that will cause disturbance in the relationship in the future.

“Housework used to be seen as women’s work only, due to a man traditionally being the breadwinner and the woman staying at home all day. Yet, in today’s society, if both the man and woman are working, it’s more fair, loving, and respectful for both of them to contribute to keeping the house clean,” Dan said.

“On the other hand, if a man is a sole breadwinner and the woman stays home all day, many people would agree that she should do most or even all of the housework. That said, no one actually ‘has to do anything in a relationship,” he noted that it’s all about fairness and communication.

“A woman shouldn’t ever force a man to do housework and a man shouldn’t force a woman to do it either. Instead, the couple should honestly agree on what they feel is fair and then go with that. If it feels unfair to one of them, resentment will build up, arguments will happen and they will feel less connected and happy as a couple.”

I think we all can agree with Dan Bacon and Alex Scot too. These decisions need to be made with respect and agreement. There should be a middle ground in terms of arguments and it should be ensured that one spouse is not taking way more responsibility than the other. Both partners should meet each other halfway.

What are your thoughts on this matter? Let us know in the comments how you would solve this matter if you were in the wife’s position.