Pregnancy can take a huge toll on one’s body.

For some people, it is much ‘easier’ and they can’t essentially carry on working with no problems for at least the first few months. While others have to deal with severe morning sickness and many other issues that render them not being able to even get up. That is why it is paramount that employers understand this and give necessary concessions where possible. Even if you are a woman and have gone through pregnancy yourself, everybody is different.

And that means they might be going through something different than you. However, this guy clearly doesn’t understand that or doesn’t want to. As when an employee under his care got pregnant and thus very sick. Rather than supporting her through this, he decided to harp on her about her low productivity. There are a lot more things he did that you can read for yourself in his own words by scrolling below.

We have only just started and this already sounds like a lot.

Even from his use of words like ‘apparently’ he clearly isn’t taking it seriously. 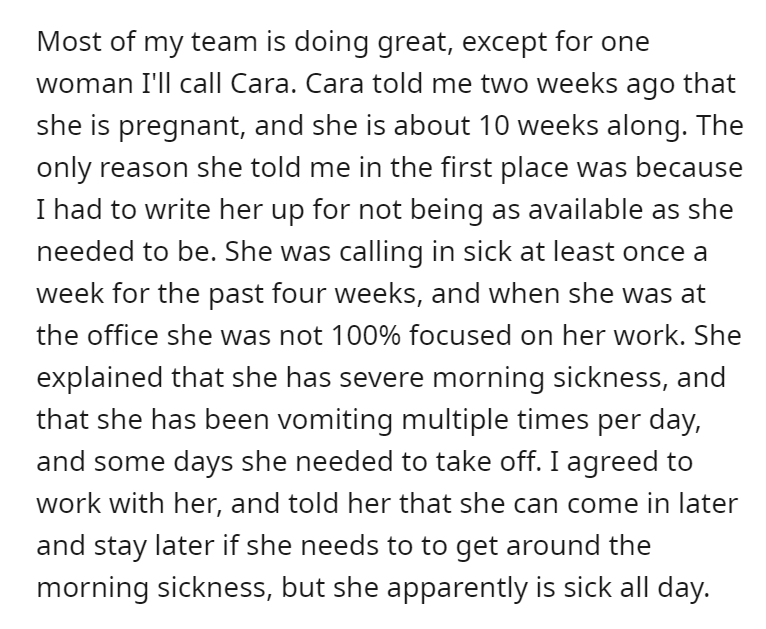 He, however, did give her some concessions as long as she did her work flawlessly. 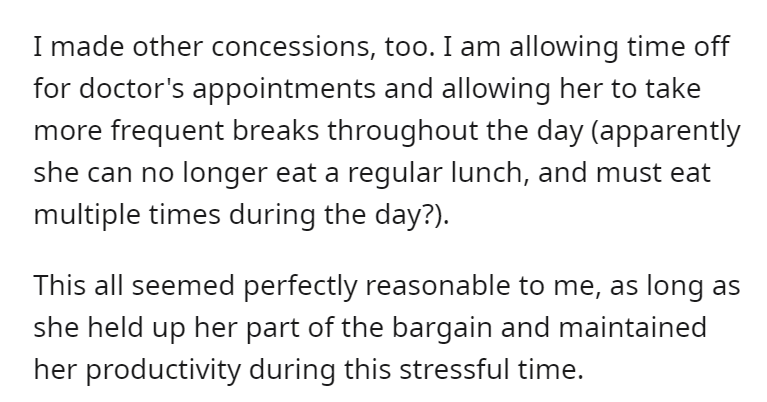 From what is evident, she has been going through a lot and we don’t know enough about her health. 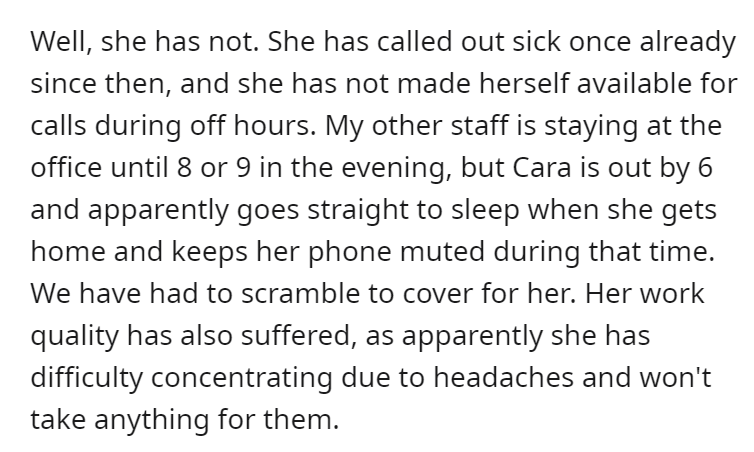 But rather than coming to a solution, he talked about the ‘feminist movement’. 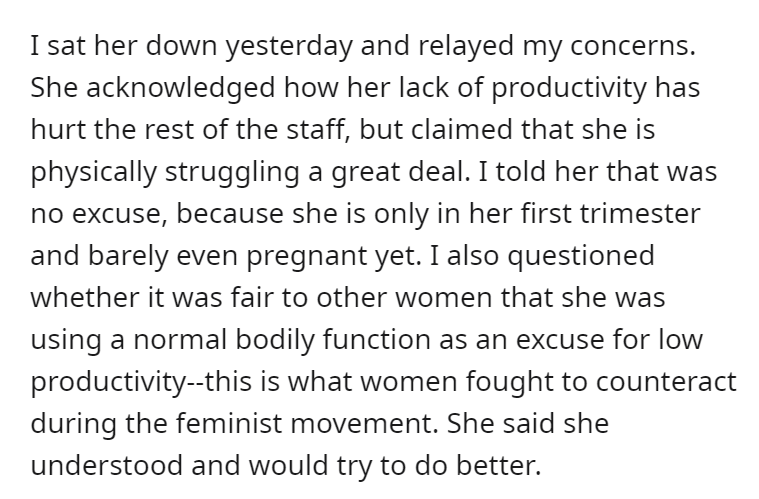 Cancer is also a normal bodily function. All illness is by OPs definition a normal bodily function. Christ what an AH. Not to mention that this could become extremely expensive should she end up terminated, since she could likely sue for wrongful termination, which will be extremely expensive for the company if she were to win such a suit. Why anyone works for OP is beyond me – I’d rather work retail for minimum wage. –semi_cyborg_catlady

So when he relayed this to his wife, she was understandably angry at him. 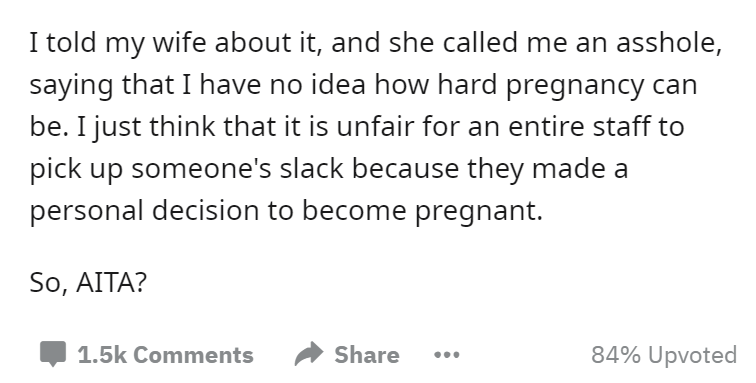 Thus he is now on Reddit asking whether he was in the wrong. 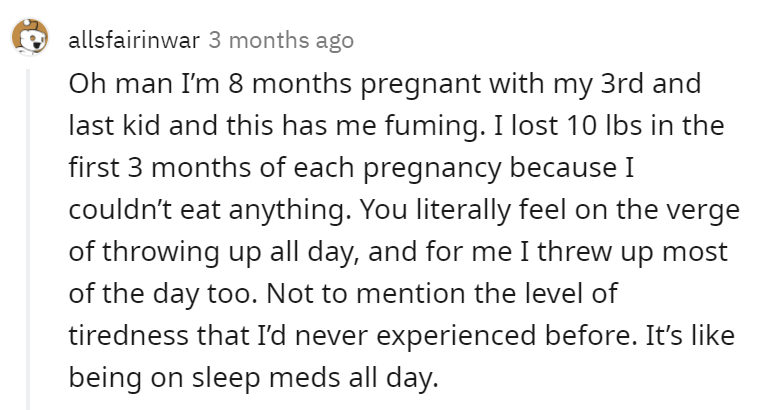 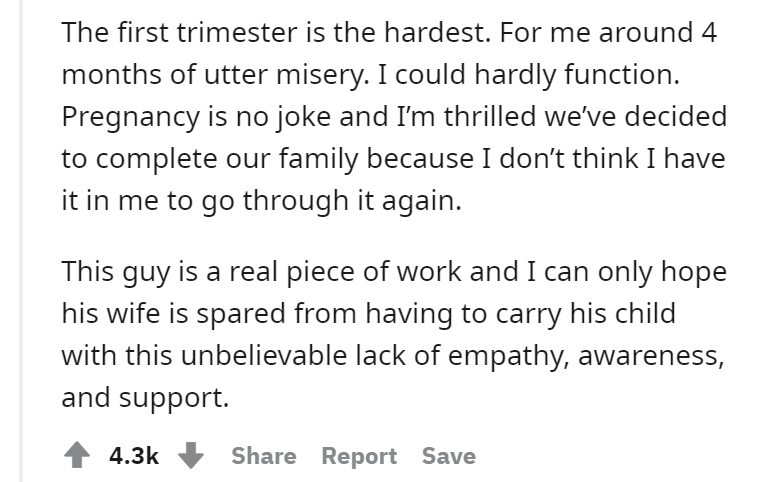 I am surprised that he even had to ask since all of this seems pretty cut and dry. 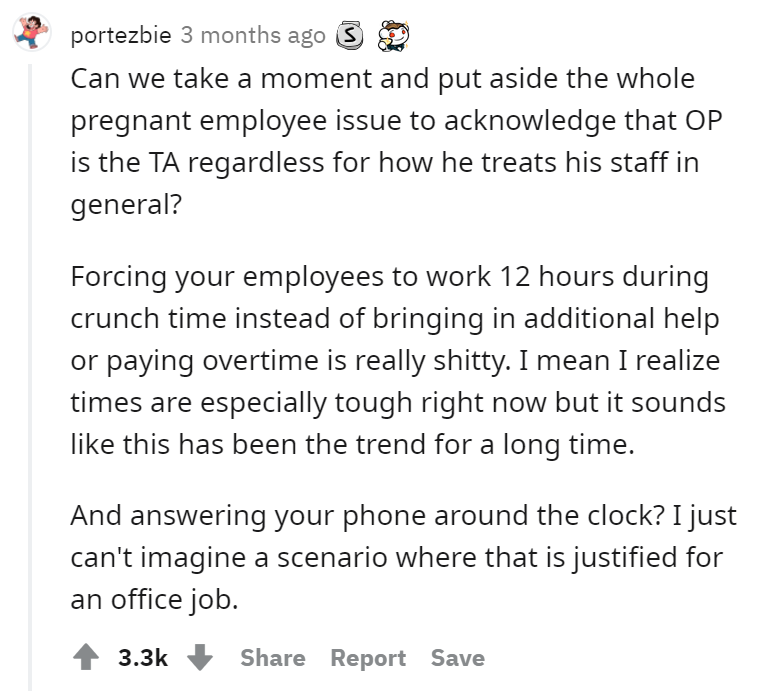 What he did was actually quite insulting to assume that she is ‘alright’. 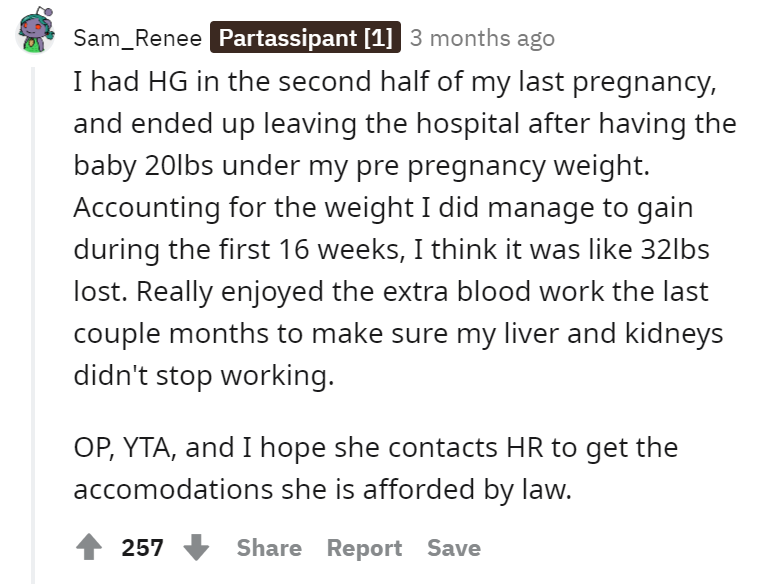 People shared their own experiences with pregnancy. 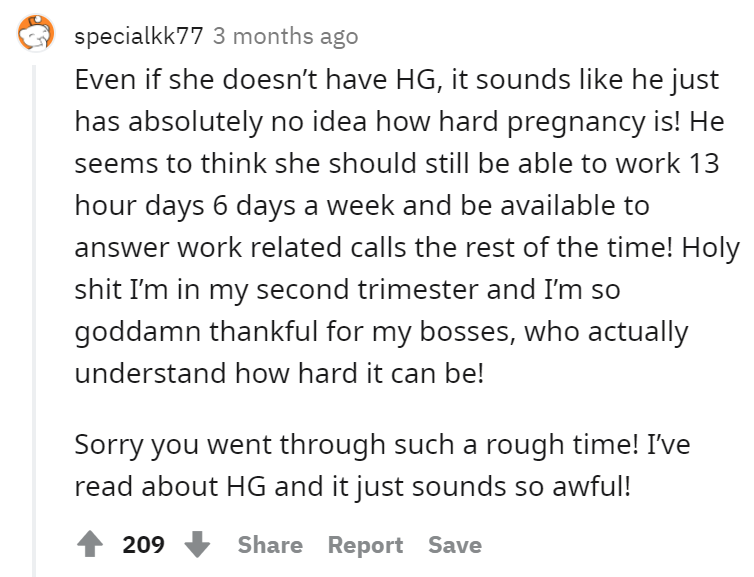 And how hard it can actually be for many. 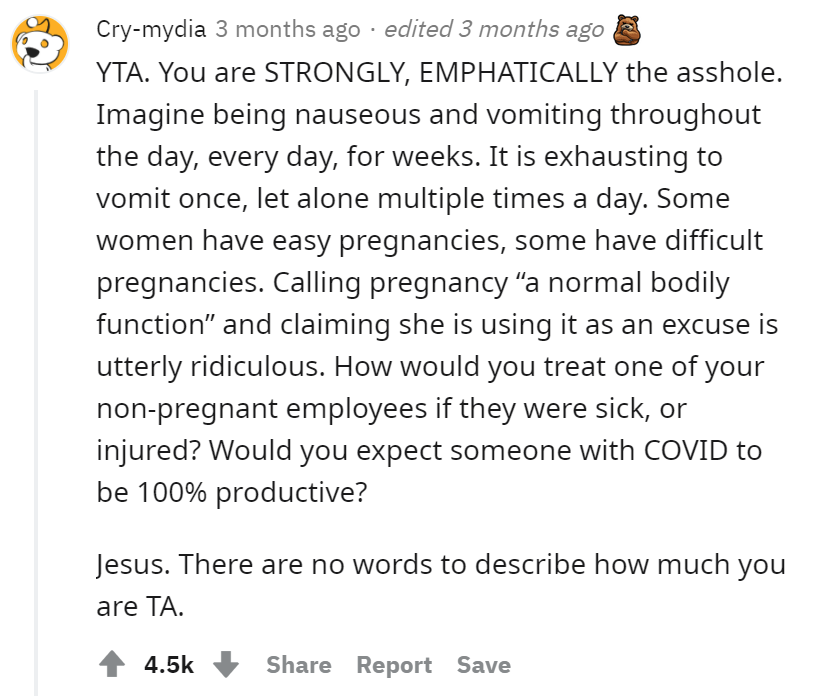 Just because it is a ‘choice’ does not mean they can’t about the issues they are dealing with. 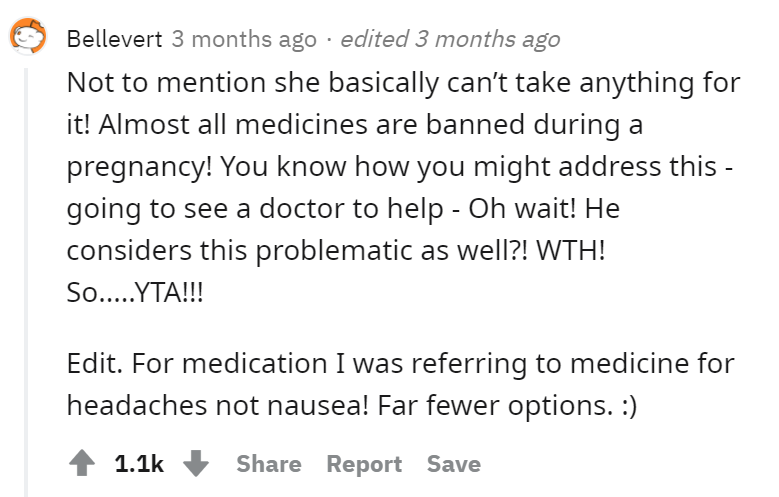 YTA. No way a real person could be this obtuse. For anyone curious, morning sickness does indeed last all day and varies in severity from pregnancy to pregnancy. Pregnant women are frequently encouraged to eat small meals throughout the day instead of a few large ones to help with blood sugar, nausea, and other symptoms. Exhaustion and headaches are common first trimester symptoms.

You can’t be “barely even pregnant” – you either are pregnant or you are not. Mandating that staff work while off duty skates very close to violating labor laws, if it’s not outright illegal. –aSeaPersonByNight

Even people who have ‘easy’ pregnancies feel like getting up from bed is an impossible task. 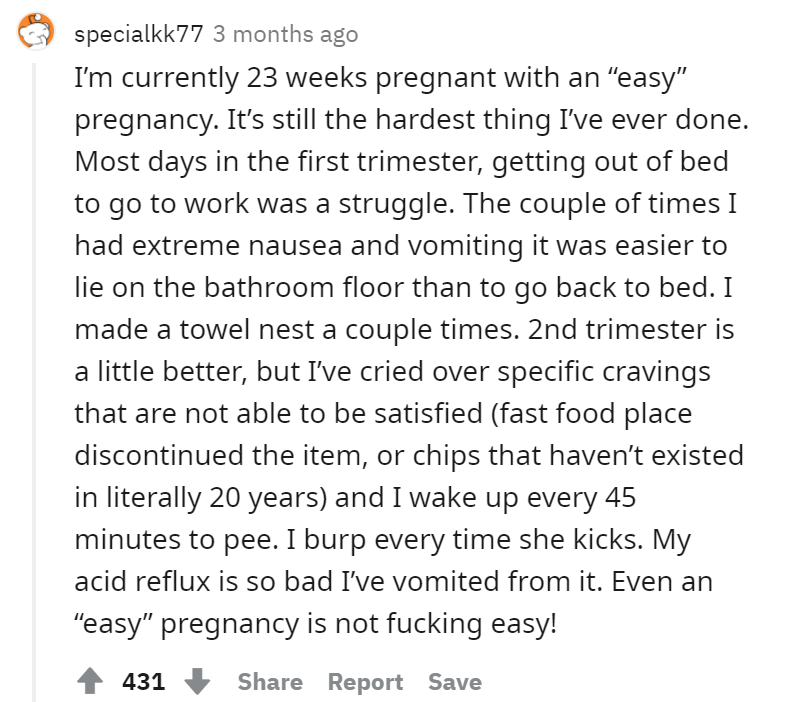 How would you deal with this if your superior acted this way when you were pregnant? Would you go to Human Resources? Comment down below and let us know.