Here’s how treatment for infection actually makes you look majestic.

It is really tough on pet owners when their pet is not in good health, it’s like your biological child getting sick. The pain is the exact same. And the reaction is the exact same as it would be for their baby. Their first instinct is to rush their baby pet to the veterinary doctor and diagnose whatever problem they are facing in order to get it treated before things escalate. It is always good to be proactive. This situation I just mentioned is an ideal situation. For those who can actually afford multiple visits to the vet. There are people who don’t go to the veterinary doctors in times of need for their pets because they can’t really afford the visit costs and that is a sad reality.

This was the case for a Thai cat owner Thammapa Supamas. Thammapa’s feline had a fungal infection and instead of going to the doctor to get a proper checkup and treatment done, Thammapa used turmeric to treat that fungal infection. I kid you not, this actually happened.

It is actually very normal for pet animals to contract a fungal infection. Thammapa’s poor kitty had developed ringworm on one of its legs. As the name implies, the infection looks like a ring and comes up on both humans’ and animals’ skin. But they don’t always come up as rings. So Ka-Pwong, Thammapa’s cat, case, the ringworm appeared as a streak on one of its legs

Meet the adorable Ka-Pwong who got infected by a fungal infection called Ringworm. 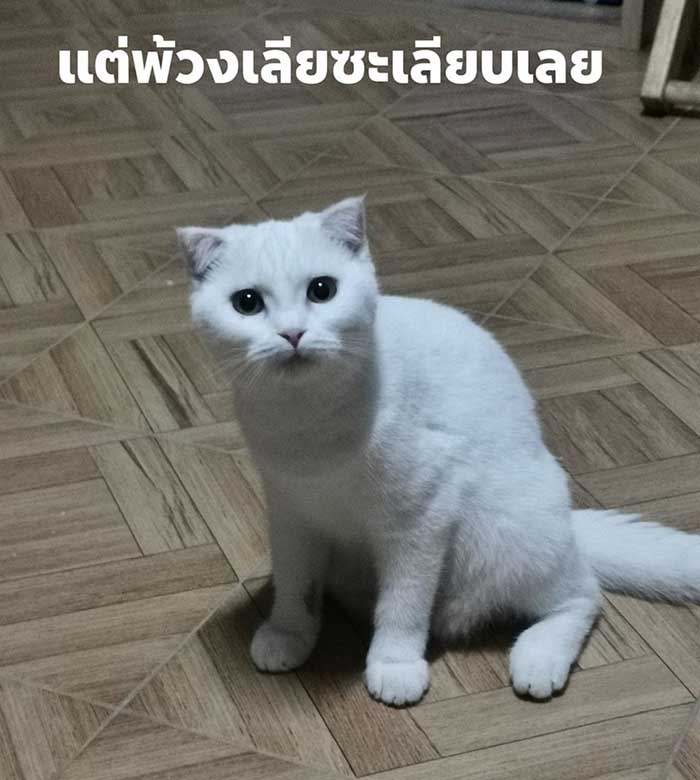 Here’s what Thammapa had to say about his cat’s infection:

“My cat Ka-Pwong had ringworm, and we did everything to cure it, but nothing worked. That was when my mother had the idea of using turmeric. At first, she painted on the ringworm but as there was a lot left, she decided to paint the whole body to prevent future mycoses.”

Yes, you read that right. Thammapa’s mother scrubbed Ka-Pwong with turmeric in order to remove the infection and prevent any recurrence. 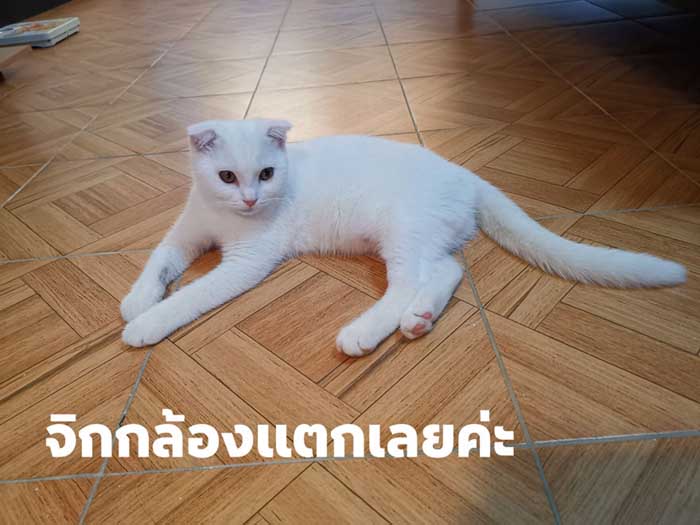 Turmeric is heavily used in the majority of Asian cuisines. It is the main component of the curry that we all so love. It has a bright yellow color. The reason why Thammapa’s mother used turmeric to treat the fungal infection was that it has a huge remedial impact. As a matter of fact, it can actually boost one’s immune system as well. Along with that, it helps treat swellings, fevers, infections, etc. 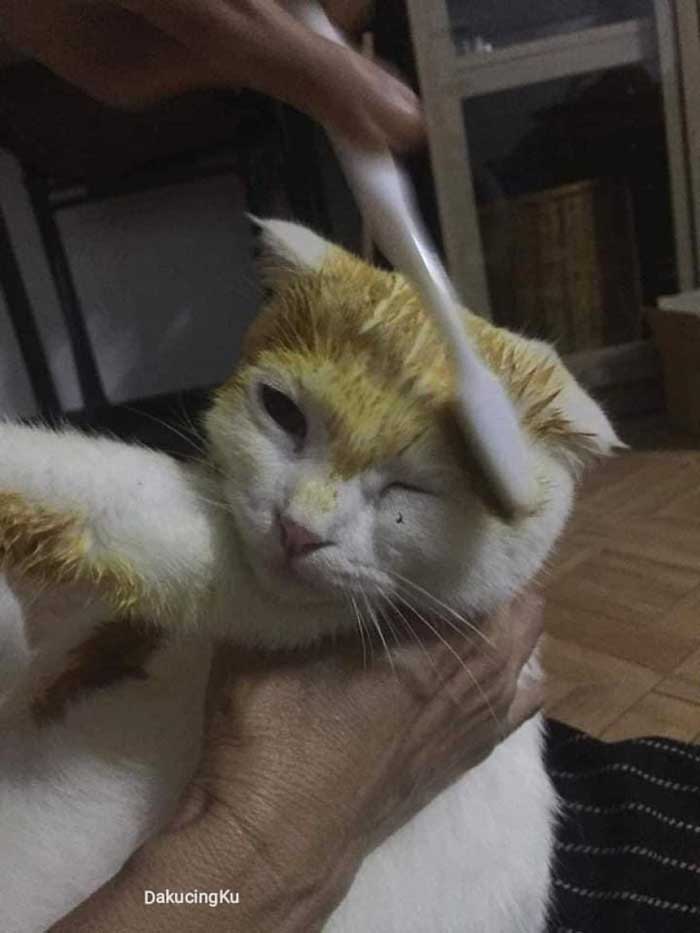 Half way through the process, almost turning into a Pikachu don’t you think? 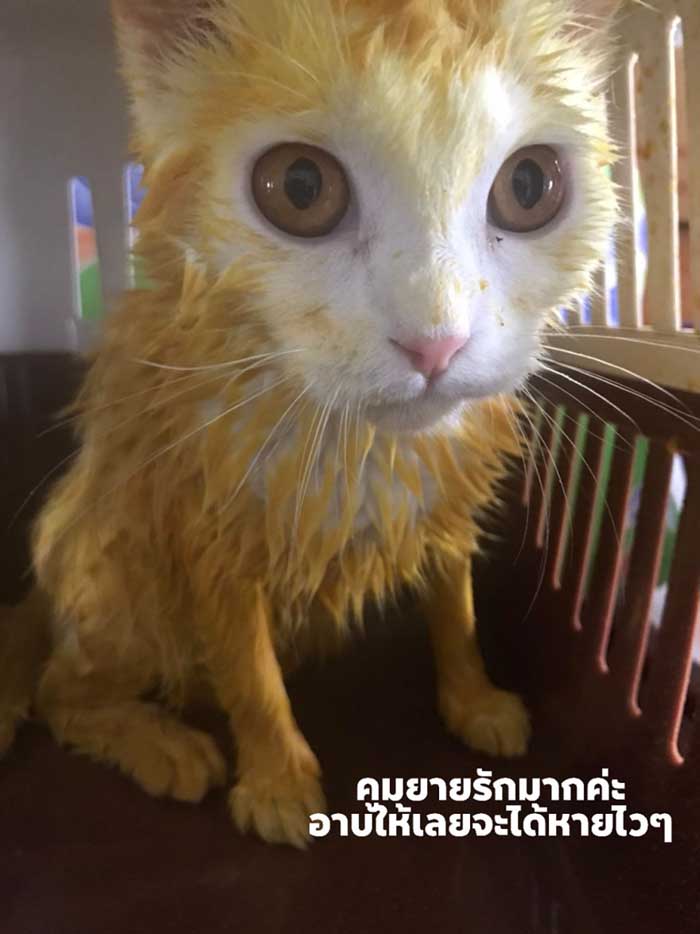 They tried a couple of times to wash it off but nothing worked. Thammapa’s angelic white cat had transformed into a bright yellow one. 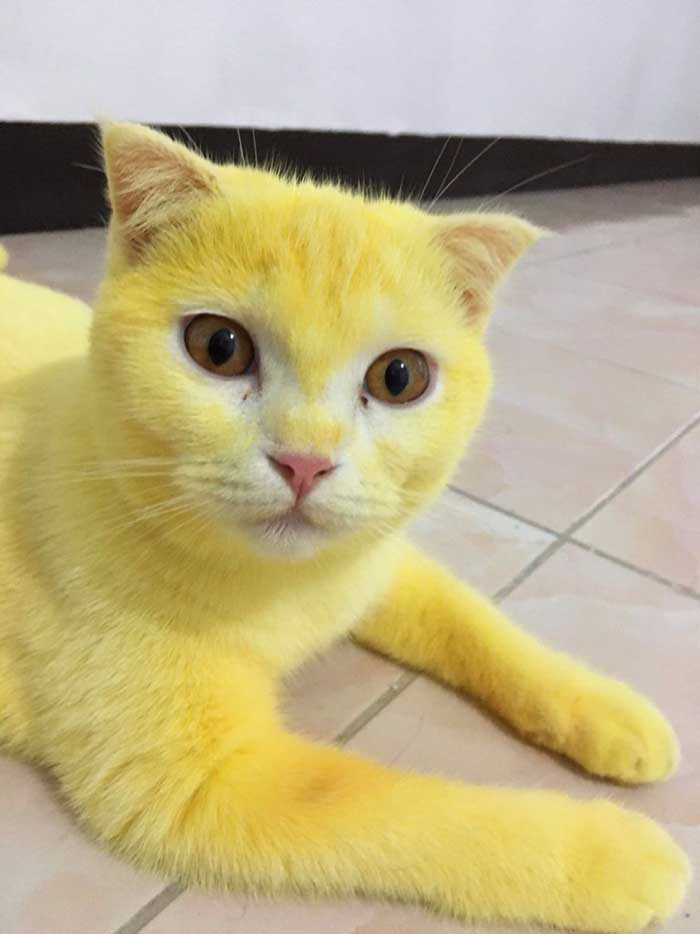 See, in such a situation, one would panic real bad but that was not the case for Thammapa and his mother. Instead, Thammapa decided to share Ka-Pwong’s new look with the internet. He dedicated a Facebook page to the cat and it got viral real soon. There were all sorts of comments, reactions, and opinions on the story but the majority really loved the unintentional makeover.

Thamma added that he doesn’t intend on telling the kitty about this event and that after being treated by turmeric, it is super healthy is back to being its cheerful self.

And the best part is, the cat’s family fully didn’t consider it a mistake. 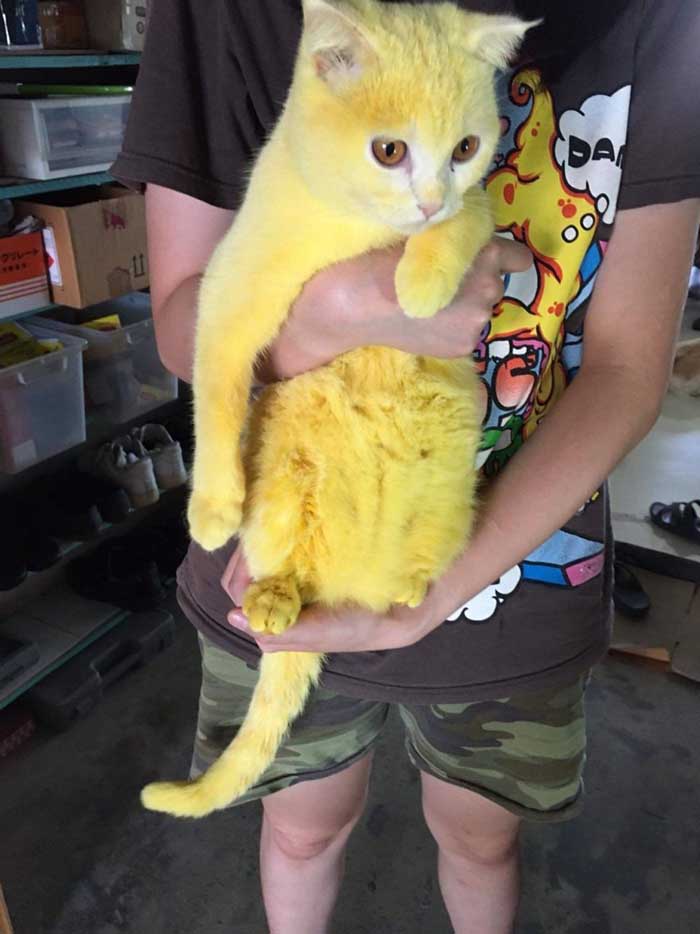 Thammapa hopes that it will take about 3 months for his yellow Pikachu cat to turn back into its original snow-white cat. And he also addressed the concerned Facebook users that turmeric is helping a lot with the infection and they are making sure that the cat doesn’t lick the wound. He also mentioned that the turmeric has actually helped a lot with the itching and kept reassuring everyone that the cat is doing much better than before.

We wish Ka-Pwong a really quick and smooth recovery. 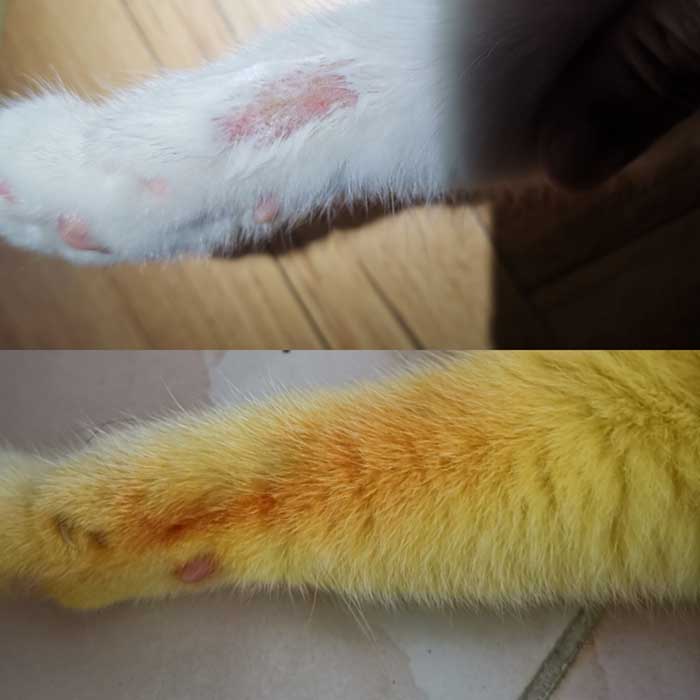 But there is one more twist left in the tale.

Say you have a yellow animal in your house. I refuse to believe anyone who’d say they don’t see a Pikachu in them. In Thammapa’s case, that was totally what he felt. His first instinct when he saw Ka-Pwong in its whole new yellow entirety, he thought ‘h my god, that’s Pikachu’.

So with the opportunity bestowed upon him, he used editing software to turn his cat into Pikachu. 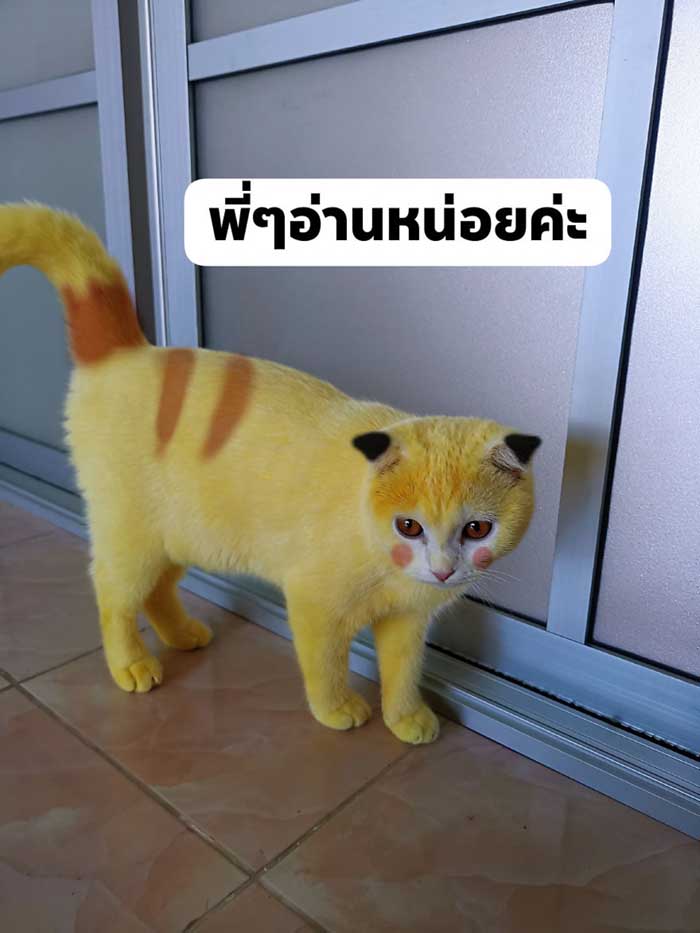 My heart just melted when I looked at the edit, it looks so adorable and exactly the same. The innocence is pouring. The cat already had a very floofy appearance just like Ash’s best friend from Pokemon, Pikachu. ThankGod Thammapa didn’t feel bad about the accident and just like Bob Ross used to say, considered it a happy little accident because that’s what makes like beautiful. WIth that rounded appearance, there wasn’t much left to do, just some features on the skin and tadaa, you have a Pikachu! Thammapa shared images of his Pikachu on its Facebook page. A lot of eyes turned towards the cat as it saw an increase in followers. Ka-Pwong’s Facebook page currently has 22,000 followers and the audience absolutely loved the happy accident. 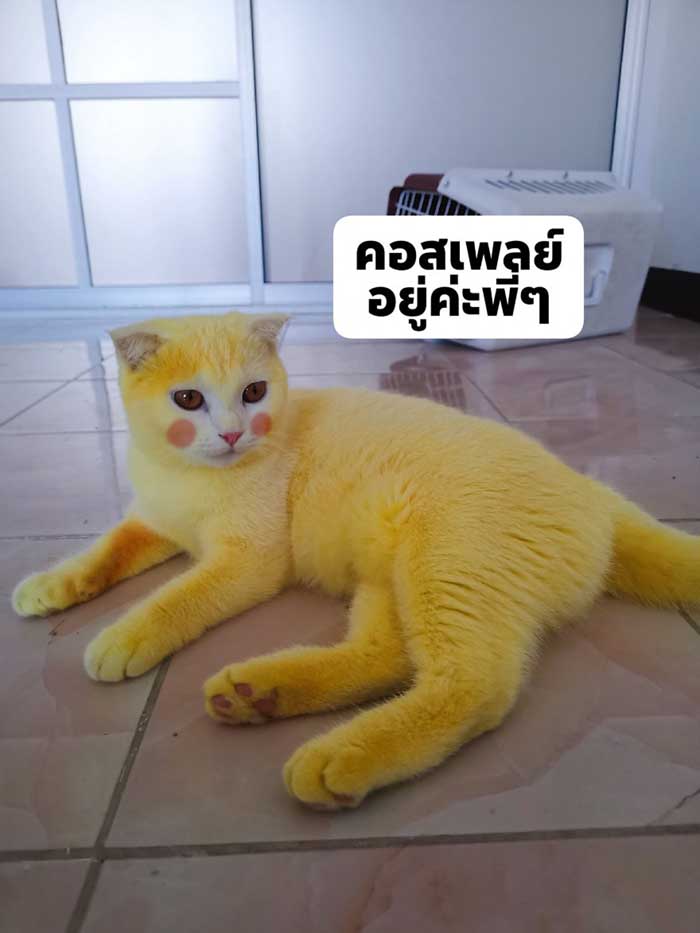 We wish Ka-Pwong/Pikachu an owner just like Ash and wish them a very happy life together. Here’s to our newly created Pikachu. 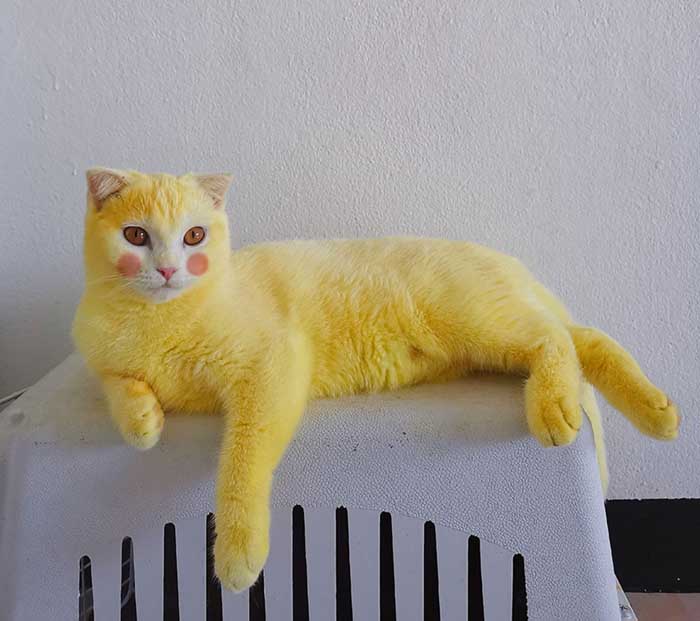 Share your thoughts in the comments section down below. Have you guys have had such random and unique experiences with your animals? Do mention your exciting stories because we absolutely love to go through every single one of them.