You never come in between a relationship.

While I will never say men and women can’t be just friends, there is a very high chance that your partner will get suspicious if you are married or engaged. I am not saying that this right or there aren’t exceptions but this sort of thing usually happens. Of course, there are many people who have healthy relationships while also having best friends of the opposite gender but it doesn’t always work out.

And the following is one such story. At first, it seemed they had a healthy friendship but you can definitely see some cracks here and there when you take a look at it closely. And to just drive the point home she bought her friend an expensive gift for his engagement while giving nothing to his fiance. I mean isn’t it a common decency to get the couple something they can both use?

You can judge for yourself by scrolling below and taking a look.

Seems like a great friendship that has lasted for a very long time. 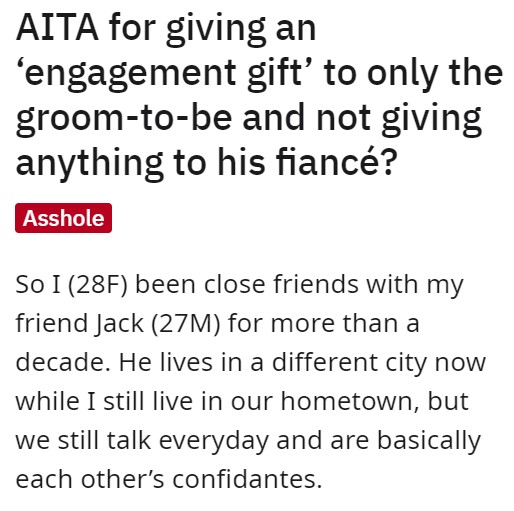 And in her words, he deserved someone as sweet as Ashley. 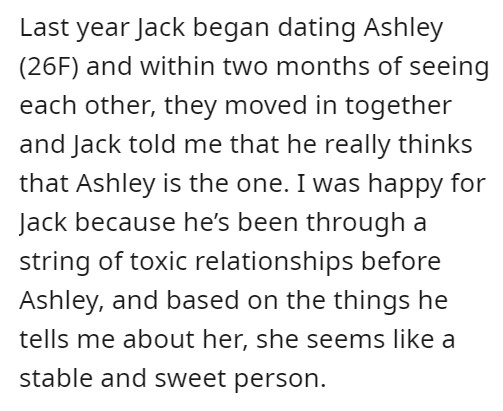 However, this is where things start to fall apart. 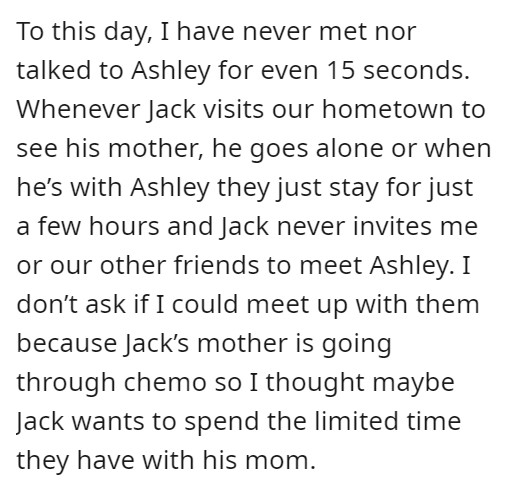 Why didn’t he introduce his girlfriend to his apparently best friend? Especially one he is so serious with. 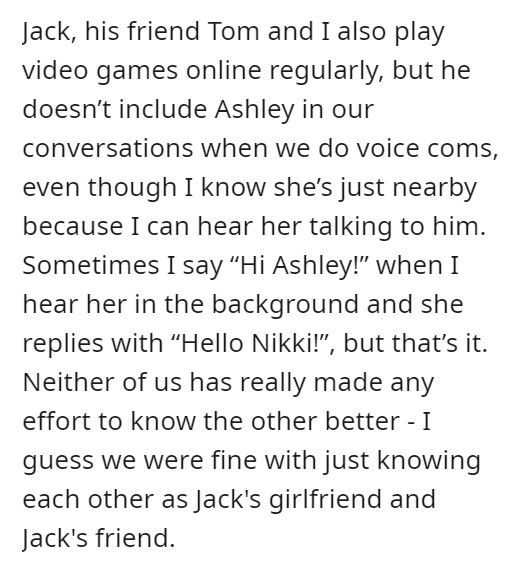 Something is definitely wrong here and it seems she was jealous enough to get him an expensive gift. 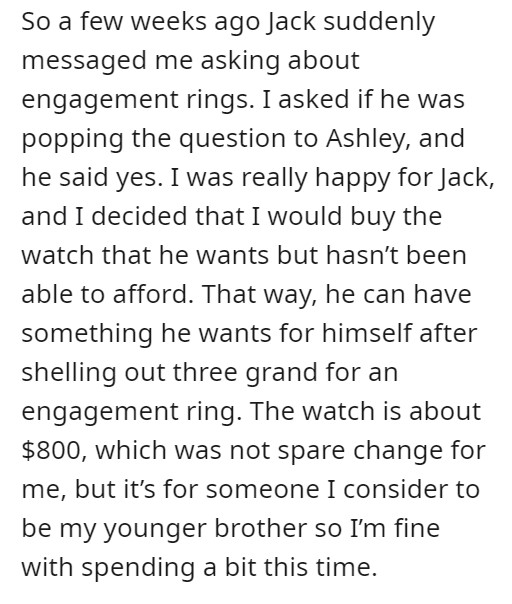 Ashey isn’t wrong for saying that, to be honest. 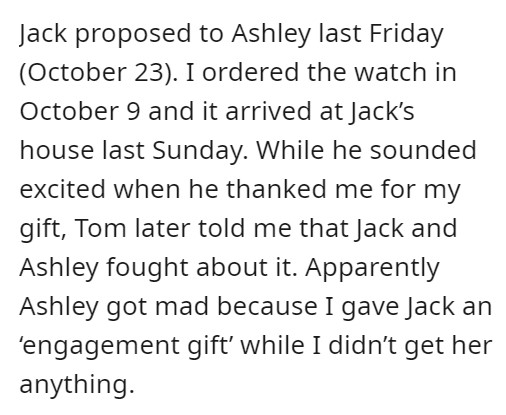 I feel like there is something she isn’t telling. 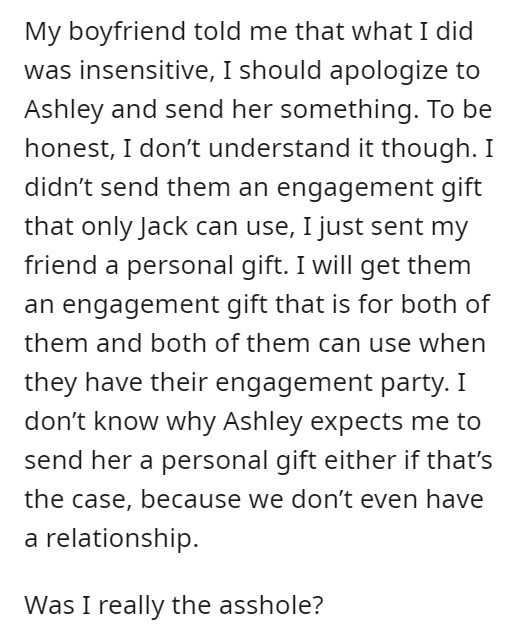 YTA, think about it like this. You get newly engaged and a female friend of his, not a mutual friend of you both, gives your fiance an $800 very personal gift. Nothing for you nor is it a joint gift.

Clearly just for him. Wouldn’t you feel snubbed and like what she did was inappropriate? No one spends $800 on just a friend usually, very few spend that on close family.

For me, that would be a flashing neon sign that there was more than just a friendship going on and you have no boundaries with my SO. Kind of like you’re marking your territory on him. I don’t think that was your intention but that’s how it can come across. –LonelyDragon11

But nevertheless according to most people she was in the wrong. 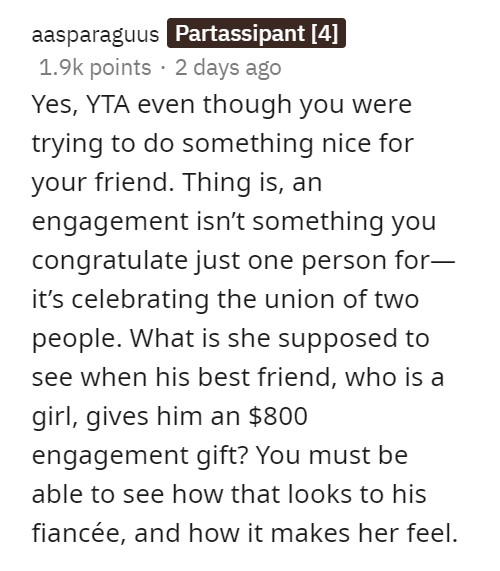 Perhaps she didn’t mean to infer anything but she needs to rectify it. 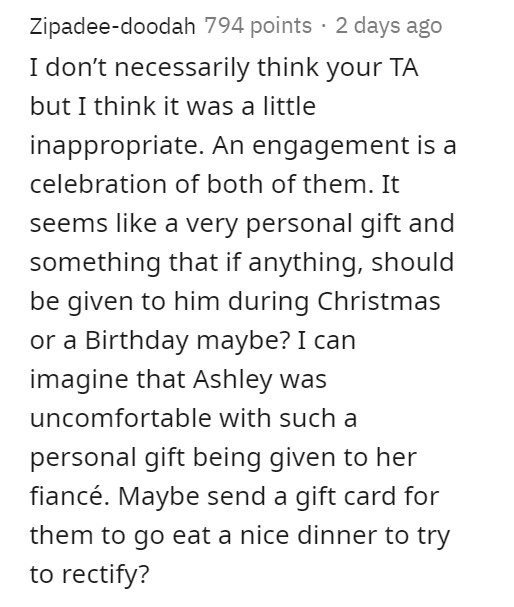 Any partner would be a bit suspicious. 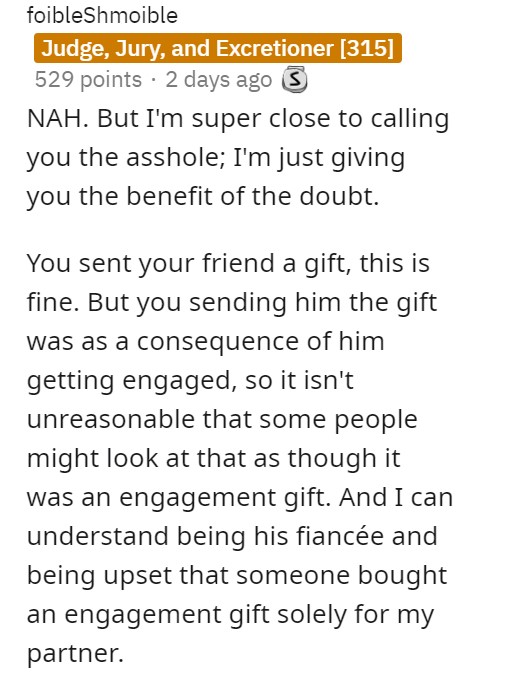 She has to understand how it looks from an outside perspective after all. 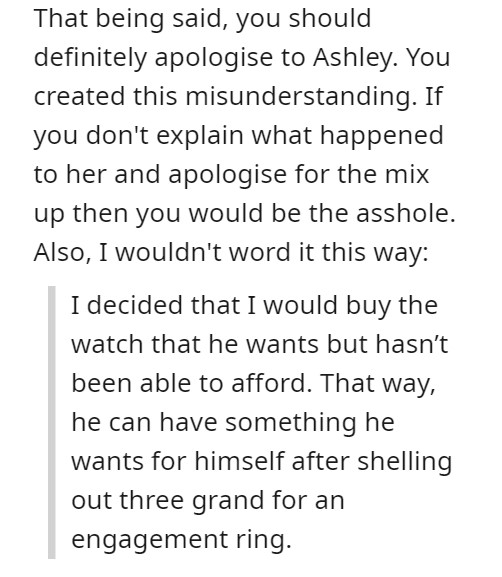 It seems like she wanted to show Ashley up. 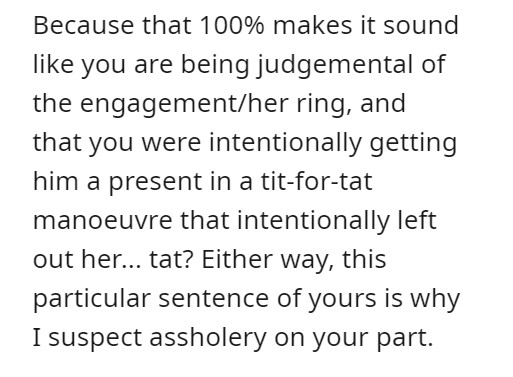 Thanks, I get what you’re saying. I was being mindful of character limits so I left this out, but when we were talking about the prices of engagement rings, Jack mentioned that he’ll have to wait for a while to buy the watch he wants (he had been talking about wanting this watch before he decided to propose to Ashley) because the ring was gonna set him back three grand.

That’s the reason why I decided to get it, I was thinking more like, it was very sweet of him to forego buying the watch for Ashley’s ring, so let me just get that watch for him. –laurencookies

It is a bit odd, to say the least. 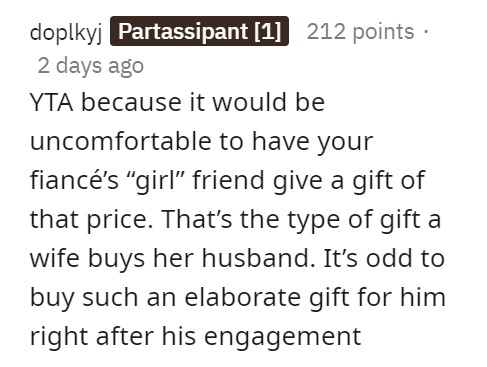 That does look weird even if you didn’t mean it that way. 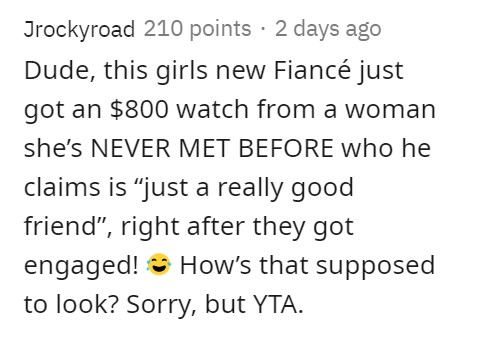 Comment down below and let us know who you think is in the wrong here.