People always have something to say about parenting styles.

Even if you never asked them for advice, people will hand out advice for free and it can generally be very condescending. There is also the fact that everyone thinks they know better when it comes to taking care of a child. Don’t get me wrong, if someone asks for advice, give it to them but what right does anyone have to judge other people? If you see someone harming a kid, then speak out, otherwise don’t make such a big deal over a toy.

If you don’t know what I am talking about, you will understand once you get the full picture. You see this woman bought her little sister a toy that was apparently marketed toward puppies. Now I don’t know about you but I don’t see anything wrong with it. I mean if it is safe for puppies, it is clearly safe for human kids so what is the big deal? Apparently, some people seem to think it is disgusting for a human kid to play with a toy meant for puppies. Yes, it is just as dumb as it sounds.

This is honestly a sad story seeing as how the child doesn’t have her parents anymore but at least she has a sister.

It is clear that this woman cares for her sister and decided to buy her a toy that would help her anxiety. 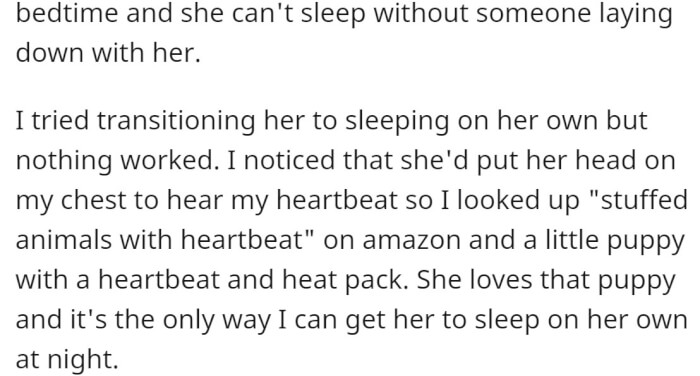 She hadn’t really paid attention to the fact that it was marketed towards dogs but her friend was not happy to hear this. 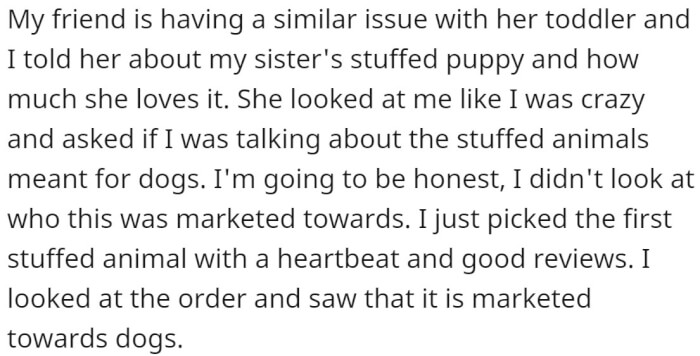 Then she goes on to ask whether she is in the wrong for getting a toy meant for dogs. 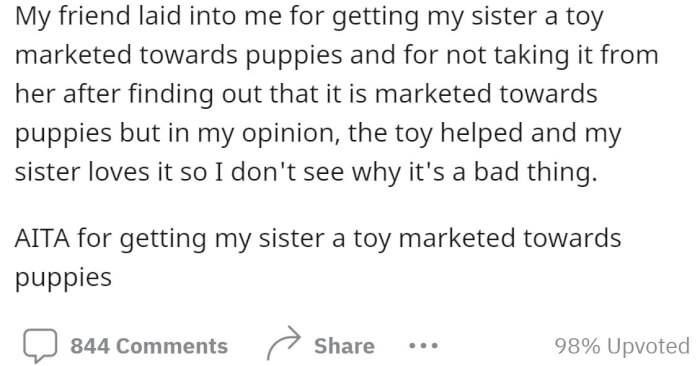 In my humble opinion, she is 100% not in the wrong. Not only had she not paid attention to the marketing, but it also doesn’t really matter in the big scheme of things. Kids like what they like and just because a toy is made for dogs doesn’t mean it can’t bring enjoyment to a human. I mean so many animals have toys that are meant for humans. Is that somehow wrong as well? I honestly cannot understand the thought process of her friend.

People in the comments were on her side as well.

Everyone just wanted the child to be safe and nothing else matters.

People even gave their own examples that poked holes in the friend’s argument.

This is what I don’t understand either.

What is there to be angry about in the first place?

If the kid wants it, get it for them. It really is as simple as that.

She doesn’t sound like a good friend in my opinion.

As long as the kid is happy, that is all that matters. 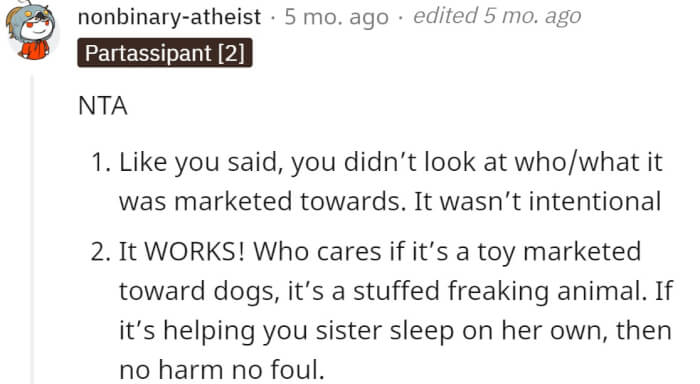 What are your thoughts on this? Do you think the older sister is in the wrong for getting her little sister a toy meant for puppies? If you think it is wrong, why do you think so? Let us know your thoughts in the comments below. And don’t forget to share this article with your friends so they can join in the discussion as well.