Your answer would probably be no. I mean, everyone has their preferences when it comes to taxi services but at the end of the day, all of them just drive you from point A to point B so what does it matter what colour the car is. Apparently, it does matter to one woman who got angry at her friend for ordering a Lyft rather than an Uber. The point of contention was that she had said she would get an Uber.

I don’t know about you but I usually say I am on an Uber even if I am with another service because that is what most of us are used to. It isn’t really lying as much as it is simply being a habit. However, we all know people who are dramatic for no reason and want to fight on every little thing even if it does not matter. That is what happened in the following scenario and you can see that for yourself by scrolling below.

This story is a wild ride so get ready for it. 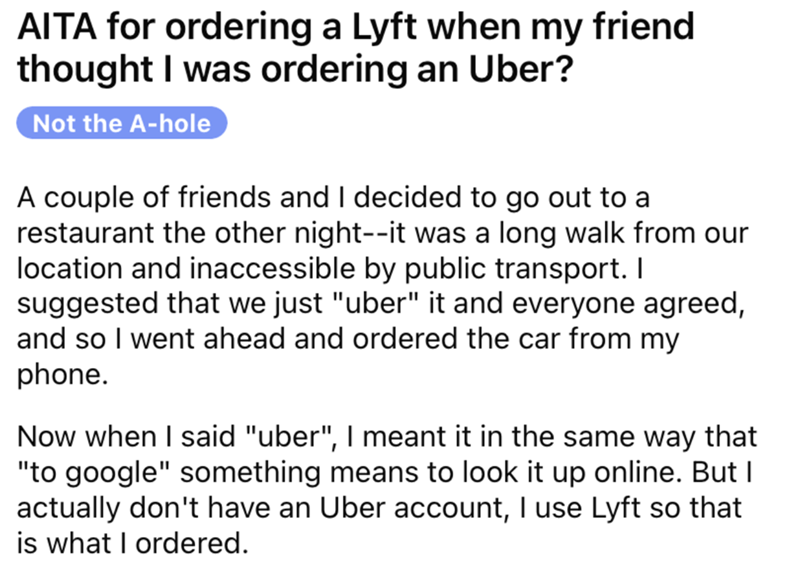 Many people value the truth but this is straight-up crazy. 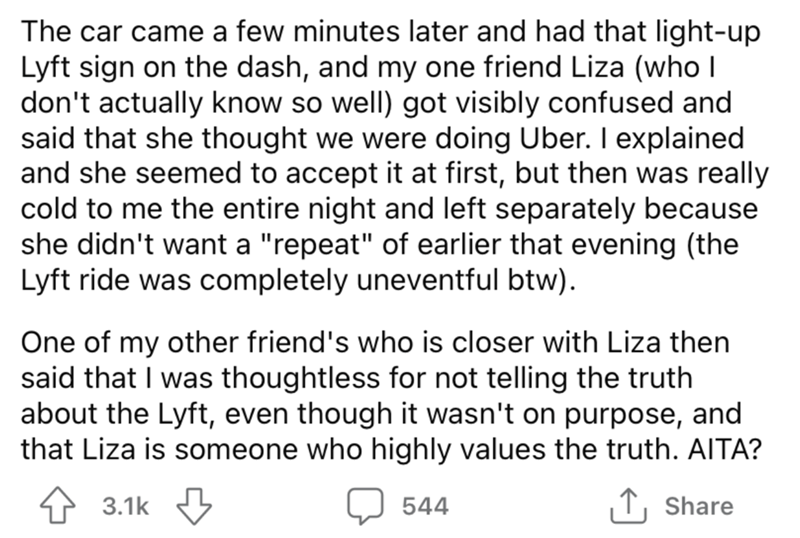 And most other Reddit users could agree to that fact.

No one wants to be friends with Liza.

We all do this every day, it is just a way of life.

There isn’t even an issue here but Liza wanted to create one.

Honestly, this is what she should do from now on.

Hanging out with Liza sounds way too exhausting for me.

There are many people in this world who want all the attention.

And they will do anything to create chaos just so people fawn all over them.

I have read a lot of weird things on the Internet but this might take the cake for me. I mean, it is so out there that it is hard for me to believe that an actual person would think like this. Some Reddit users mentioned that she may be on the autism spectrum but we don’t know that so we can’t judge based on that.

We have all had to deal with someone like this.

And we all wish we had never met that person.

It seems Liza falls into that category.

And it doesn’t seem like this friendship is going anywhere.

Only a little? I would say a lot.

This is the way to go to ‘deal’ with this.

This doesn’t even deserve to be called an issue if you ask me.

I am honestly at a loss for words.

Sometimes you have to compromise on the brand to get what you need.

However, we don’t know that.

I honestly hope she learns to be better.

This whole scenario is not really about valuing the truth.