Not everyone wants to work every day of the week.

Work is supposed to supplement your living style, nobody should have to make their whole life their work. But that is what many people have to do just to make minimum wage and get the necessities they need to live. However, even if you don’t need the overtime pay, it is sometimes impossible to say no to your boss as evident by this particular story. And once it becomes a part of the work culture, new employees also have to adhere to it.

Atleast that is what this person was supposed to do. You see at the interview, the employee was told that this job would have reasonable hours and no need for overtime. However, the truth couldn’t be further from what they had said. Because as it turns out, all employees were expected to sit by their phones because their boss could call them at any moment to ask them to come back to work. I don’t know about you but that doesn’t sound like a nice place to work at.

The employee had only started work but everything was already going off the deep end from the looks of it. 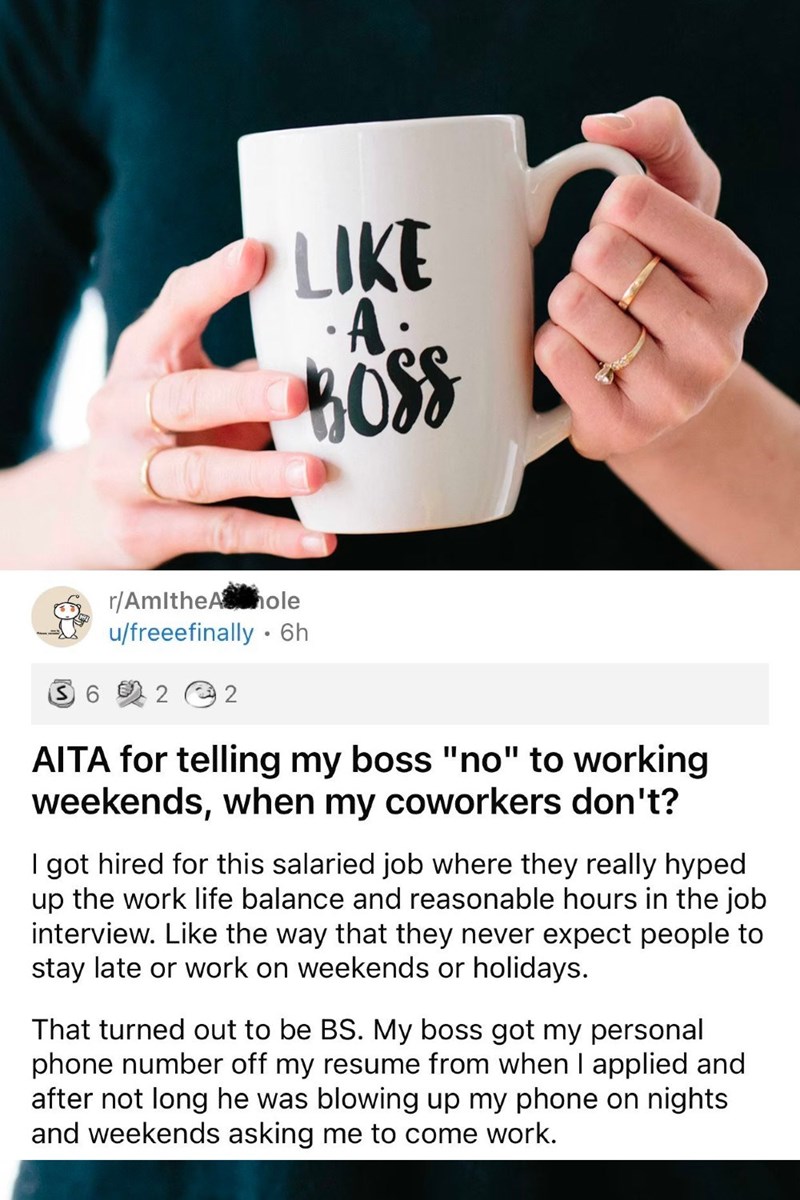 They were pretty clear that they weren’t up for whatever the boss wanted whenever he wanted. 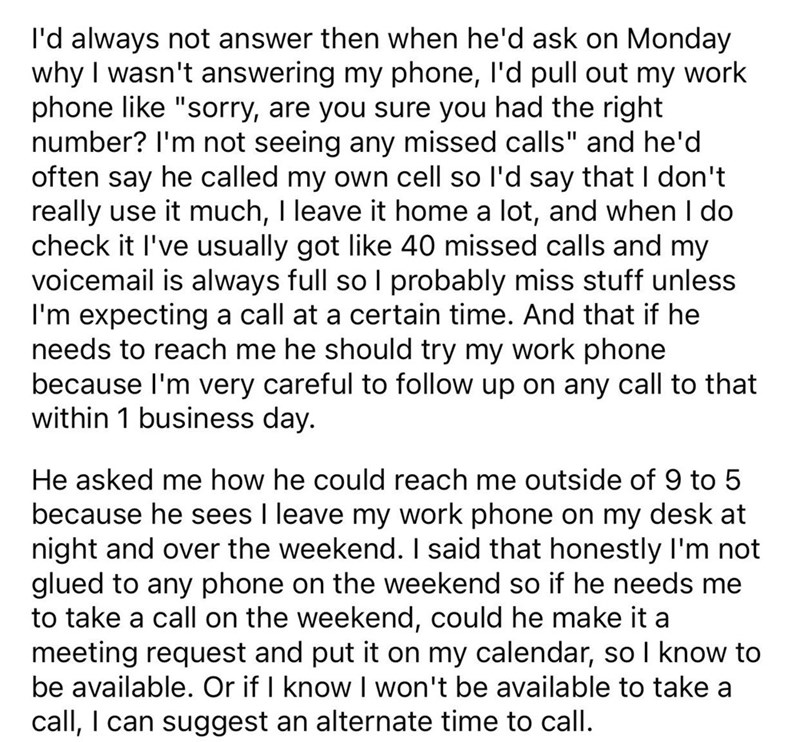 But that was clearly not working for him so he kept pushing. 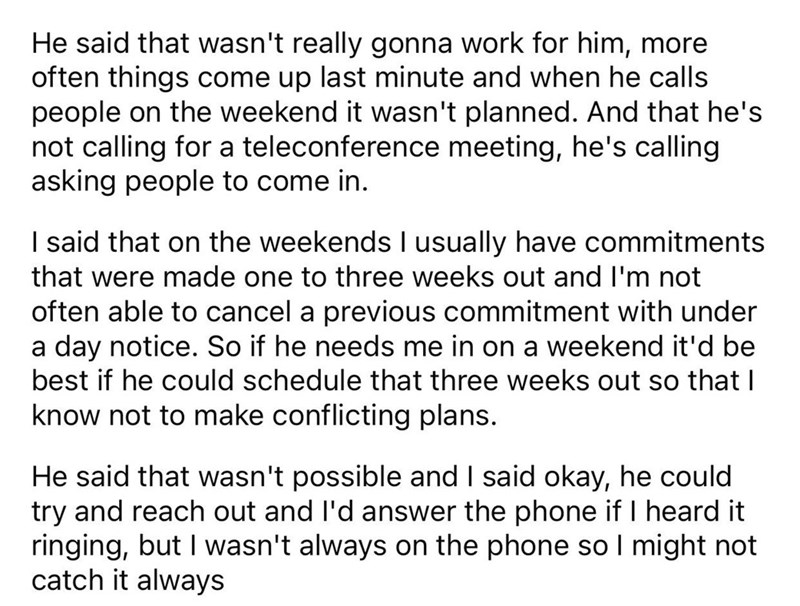 But that is not all, not even the employee’s co-workers are on their side. 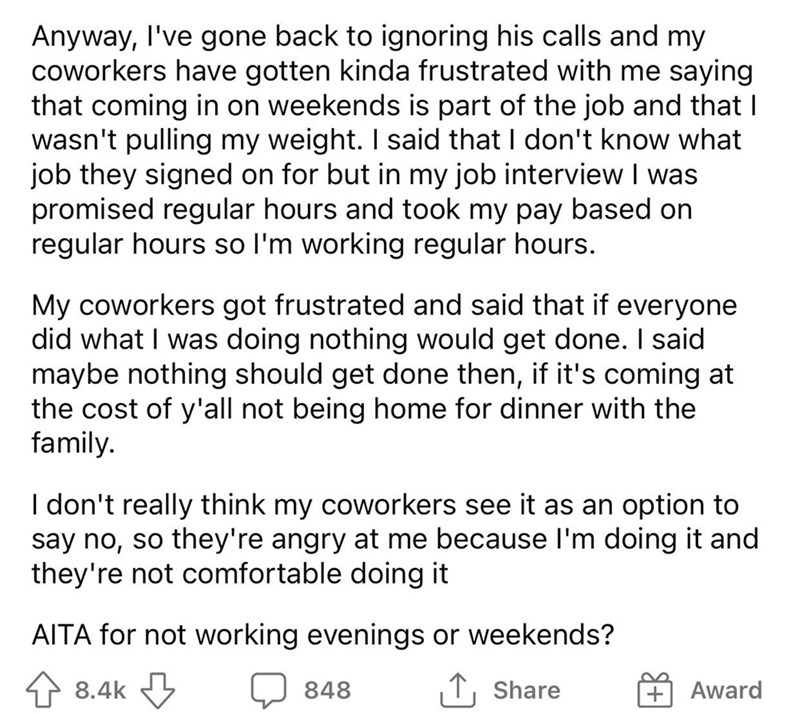 I am actively looking, but I also decided to hold out for something really good and not just jump on the first offer I get; so it’s taking some patience.

Everyone in the comments however was on their side and advised them to look for a new job. 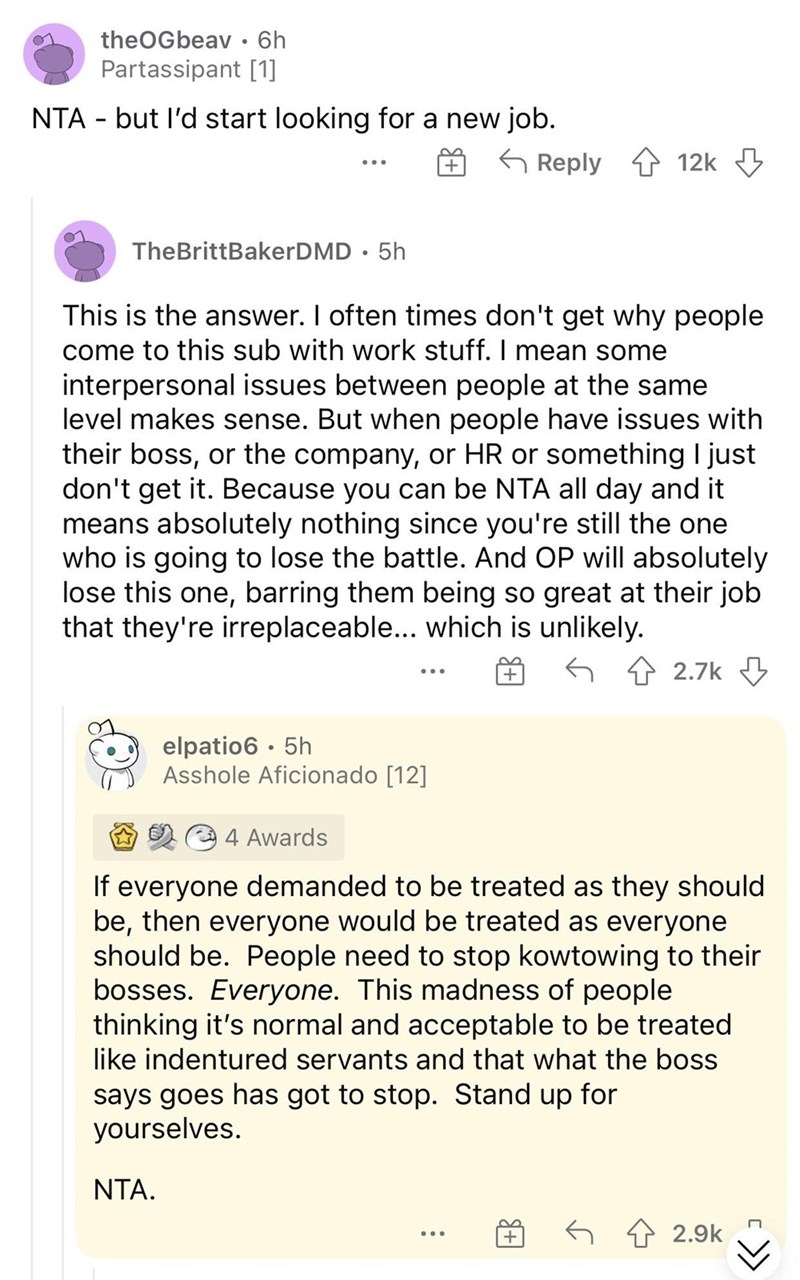 I can never understand why people are surprised when an employee doesn’t want to work all the time. Even if someone absolutely loves their job, they still want time to spend alone or with their family. However, most higher-ups think that employees are just an asset that can be used however and whenever they want rather than thinking of them as actual people with lives outside of work.

And there were also some people who weren’t afraid to tell this person the hard truth. 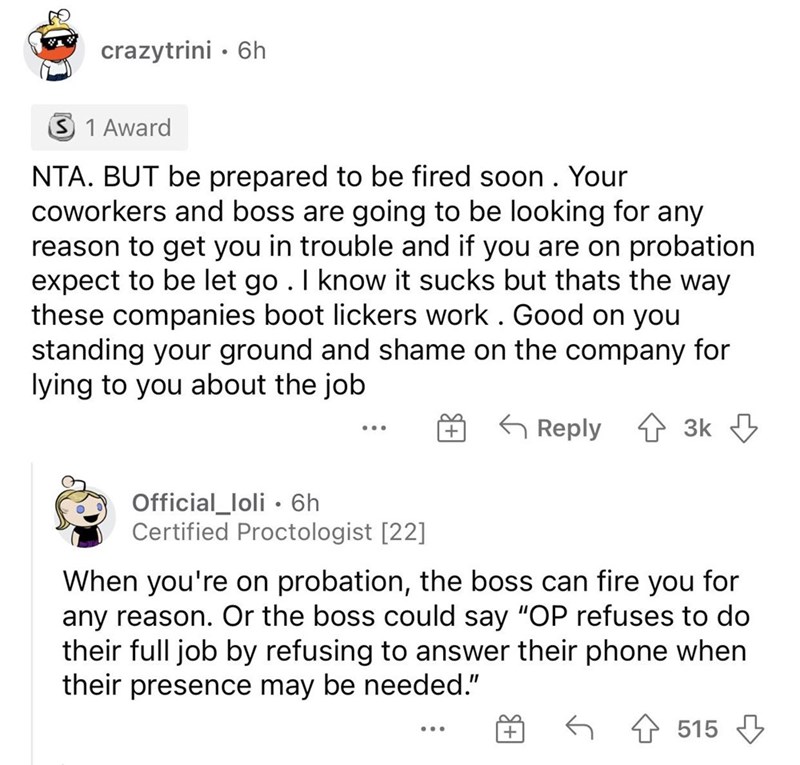 I was “unofficially” on-call 24/7 since I was the backup of the backup for all IT out of hours issues and also the only person that was in the IT security “team”. This was on top of working on multiple projects, last-minute ” urgent ” requests and dumpster fires. Work some time from 08:00 till 02:00 or even 72hrs in a row!

I did this for over five years and even got a few free drinks/shot in my local punk bar when they say me answer a call and then pull out my laptop, sometimes at 03:00. I burnt out HARD, and it took a long time to recover physically and mentally. Now I work core hours and only a handful of people have my personal phone number. If you are in the US sign up for a Google Voice number to use on CVs and the like. You can get a text translation of any voicemails and also can enable/disable numbers for free.

Also if your work-issued phone more than likely is managed by an IT controlled MDM. This system normally is set up to log a shit load of stuff and has an audit trail. This is why he is calling your personal number, so his boss, HR and legal can’t see the calls/messages out of hours if there is a dispute. –BaconZombie

It is quite clear that the boss will fire this person the first chance he gets. 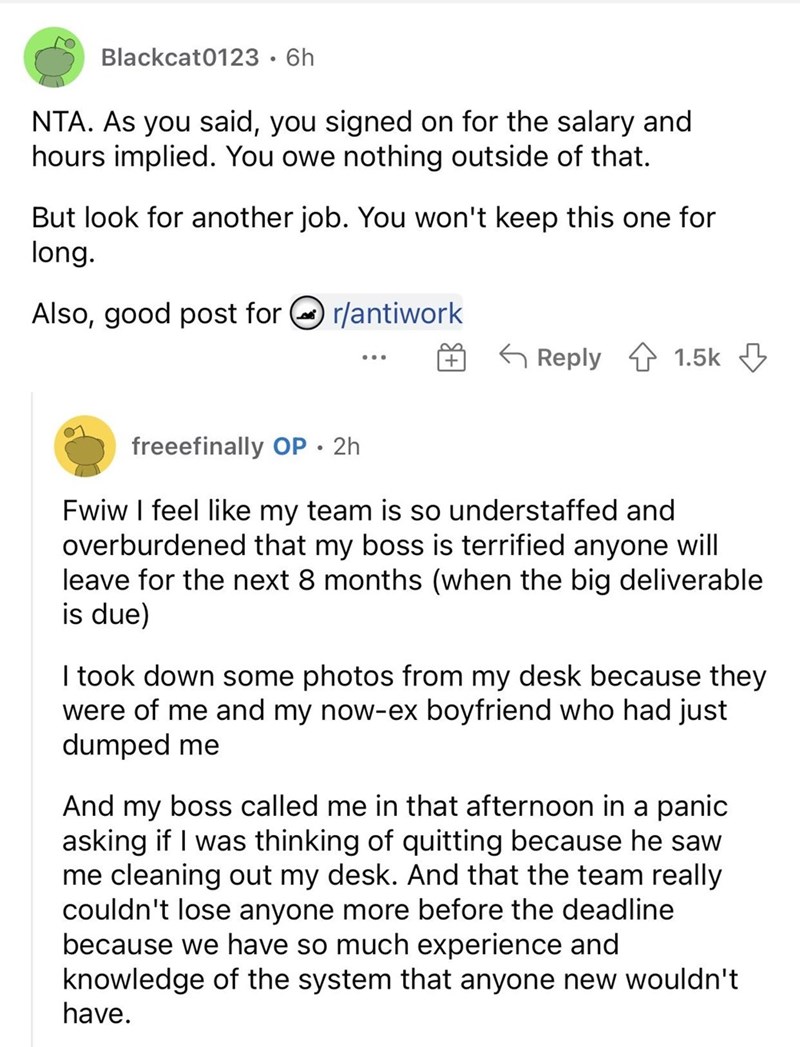 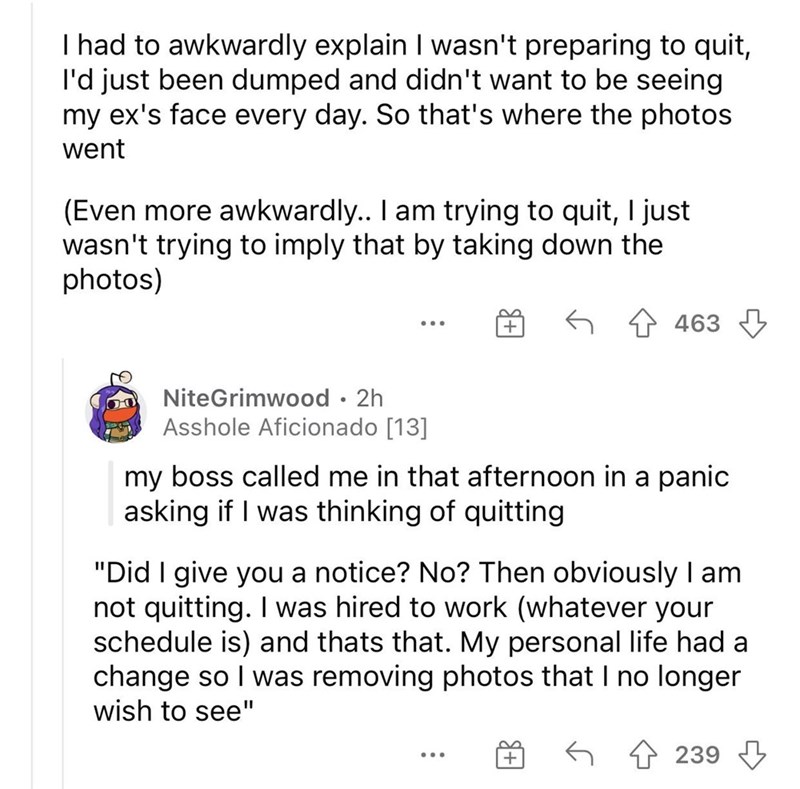 What do you think this person should do? Should they look for another job or is there another solution? Comment down below and let us know.