Pet owners would do anything to prove their love for their pets and go to all lengths to make them happy.

It would be fair to say that in just the blink of an eye, our pets become a part of the family. Their happiness becomes your happiness and when they are sad or hurt, it feels as if a part of you is suffering. You would try your best to make them feel better. Our pets do a lot for us and sometimes, the roles get reversed where we have to take care of them because they deserve every bit of it! This story is also about a family dog who had to suffer 2 strokes recently after which his family decided to take care of him like their baby and treat him in a way that he heals as soon as possible.

So, in this article, we will meet Spike, who happens to be a 14-year-old English springer spaniel and is in the healing process from his second stroke. Due to his age and weak body, Spike is unable to climb the stairs that would lead him to his parent’s room, where he used to sleep with them in their bed. The family is quite devastated by the dog’s condition and tries their best to make him feel good again in whatever way possible. So scroll down to read about this heartwarming story that will surely brighten up your day. Also, don’t forget to grab a box of tissue because we will not be responsible for any tears coming ahead! 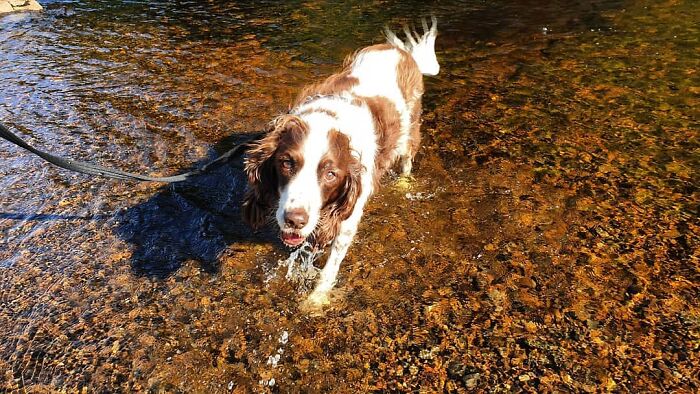 He recently suffered two strokes and is now gradually recovering. 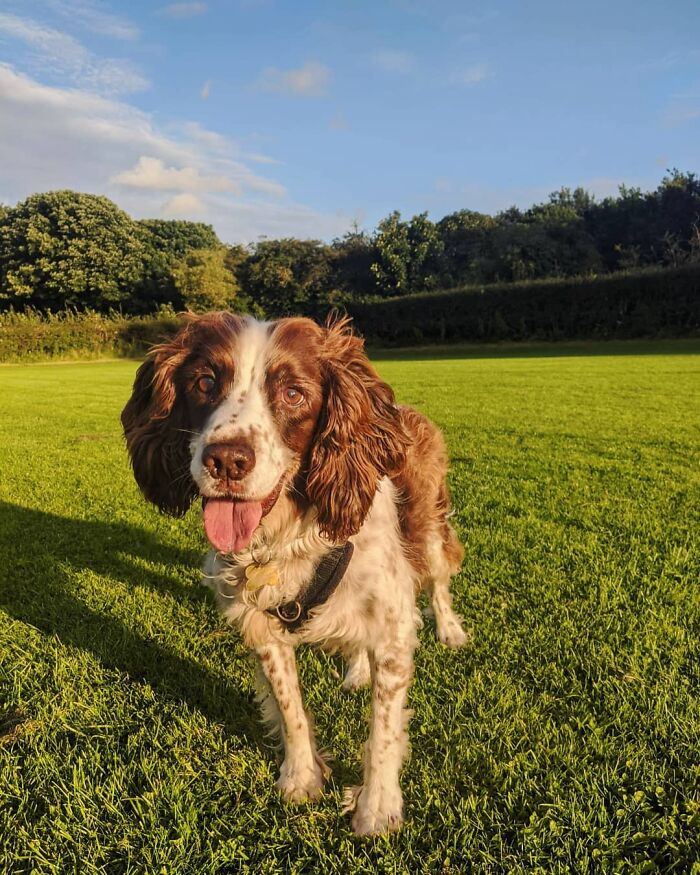 During an interview with Spike’s owners, they told “We got Spike when he was 5 from a rescue (Dogs Trust) around a year after losing our old dog (also a rescue that my parents found abandoned as a puppy). Spike had several homes before us and we can’t understand how anyone could give him up, but we’re very glad he made his way to us,”

Knowing that this cute furball cannot climb the stairs anymore makes his owners even more disheartened. Seeing him grow old and weak is surely not a very pleasing sight. “He has always slept on the bed upstairs, so when the stairs became too dangerous for him it was an immediate transition to sleeping downstairs,” the owner explained to us.

Here’s a picture of Spike during his healing process from his second stroke, but he is having difficulties climbing stairs. 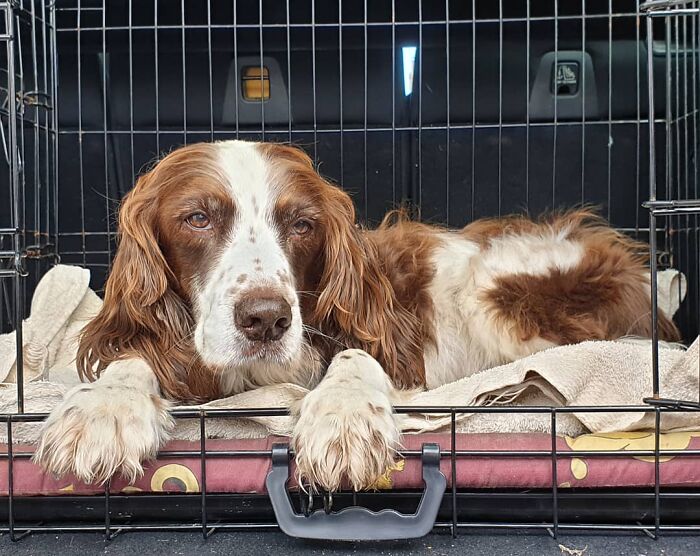 Spike having fun in the hills. 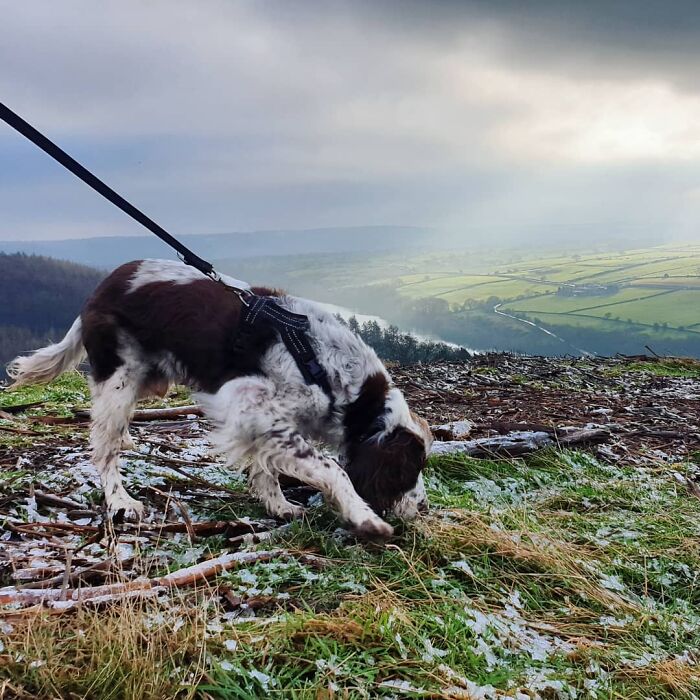 “He is very much an old man now, especially after his second stroke, so spends most of his time snoozing in the day and cuddling up with his people as much as possible,” Spike’s owner told us. “He’s a very cheeky chappy too and thinks everything we have is for sharing—personal space, beds, food and any drink that foolishly gets left on the floor from tea to wine—we have to keep a very close eye on him!”

After Spike had his second stroke, he was not able to walk properly due to which his owners had to pick and carry him around the house. However, he himself was quite determined to get better as soon as possible. Regardless of being able to walk again, Spike was still weak enough to not be able to walk all the way upstairs to his parent’s bedroom – where he would usually sleep.

Here’s the family taking care of Spike when it’s their turn. 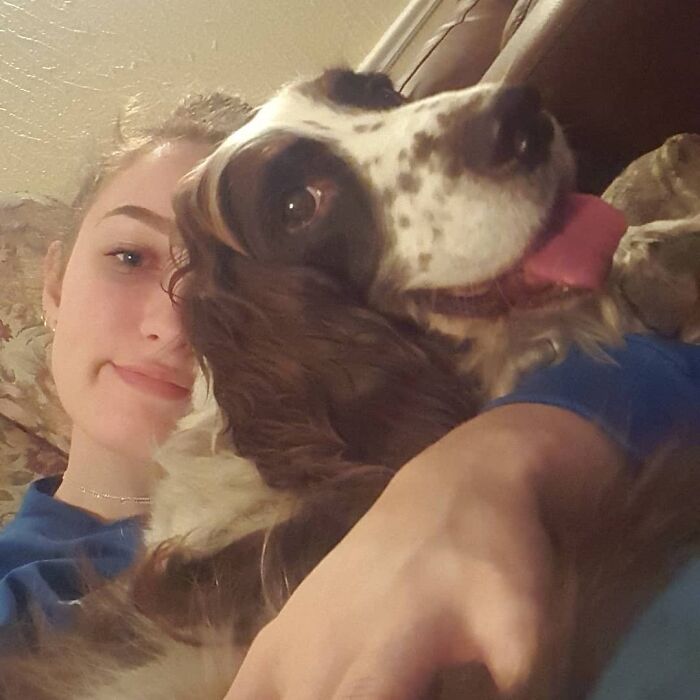 THE BEST THING YOU’LL SEE ON THE INTERNET TODAY! 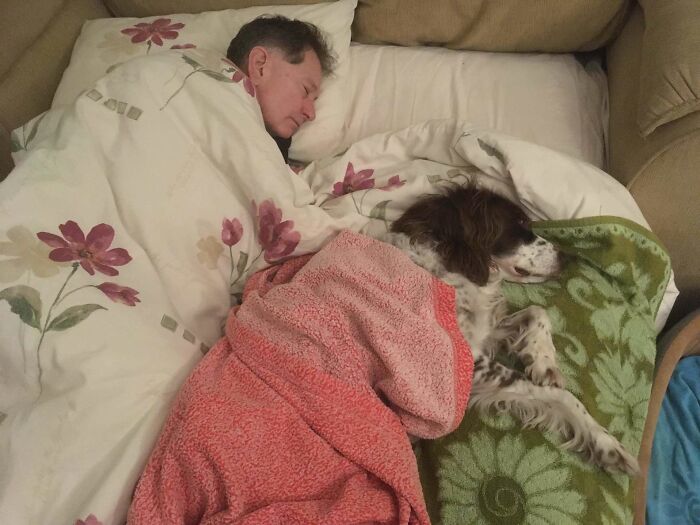 In order to avoid any harm and make Spike the dog happy, his owners devised a plan to sleep on the couch with him on alternate days so he doesn’t feel lonely or jump the gate. This way he will have company and will not feel isolated from the rest of the family as well.

“We know when he has got tired of watching TV when he gets up and goes to the other room to see if his bed has been put down for him! He takes himself off to bed when he’s had enough and gets comfy cosy,” the owner of the doggy told us. “He always makes a big fuss when whoever is sleeping downstairs gets in and grumbles at having to share the space, but once you’re in he snuggles up and especially loves to cuddle in the morning with his head on the pillow.”

What a wholesome sight! 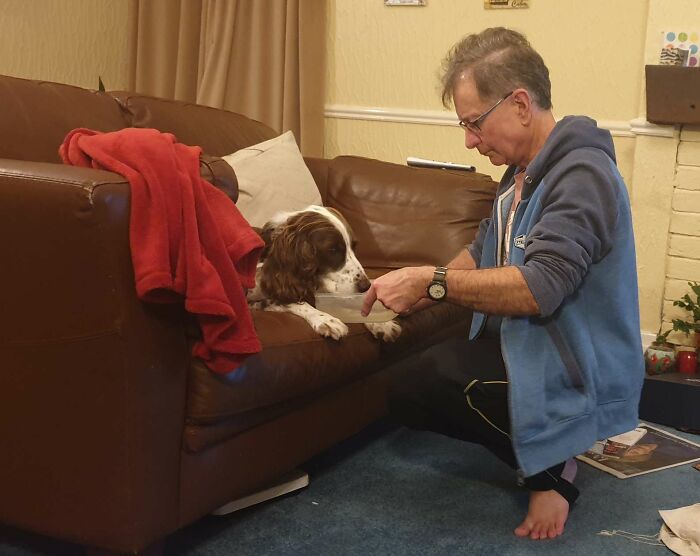 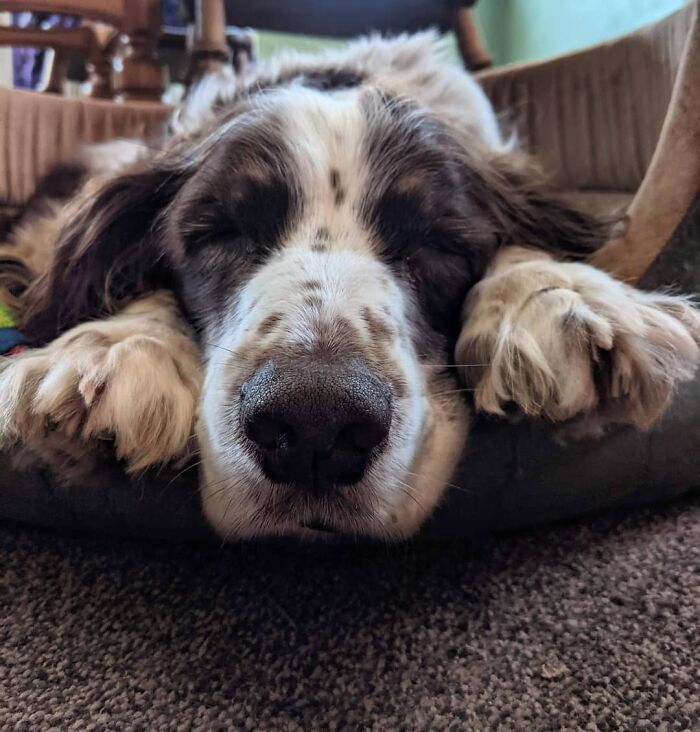 The dog shares a very special and pure bond with dad, according to his owner. “They’re absolutely inseparable. My dad calls him ‘old bean’ and they’re always chatting away,” the owner told. “My dad will also bring Spike his water and food to the sofa and feed him by hand to make sure he gets his medicines and keeps his strength up.” 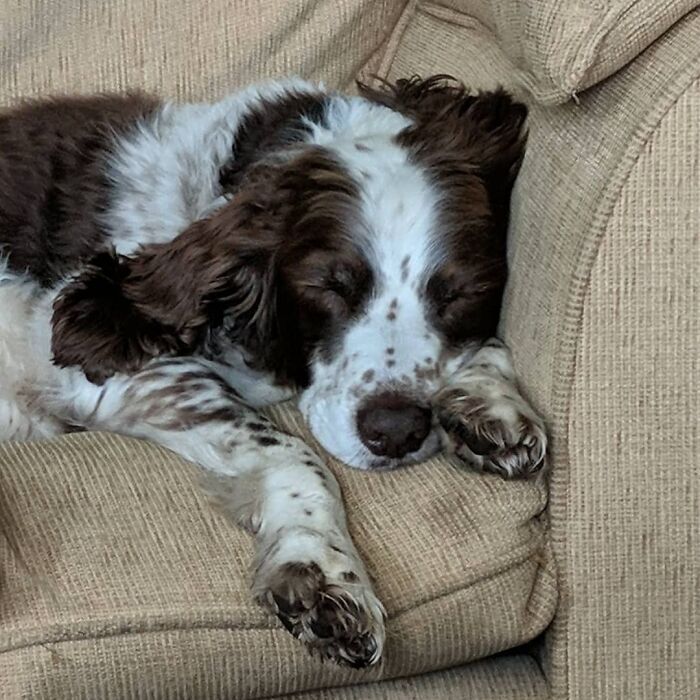 Even looking at his cute face makes our day better! 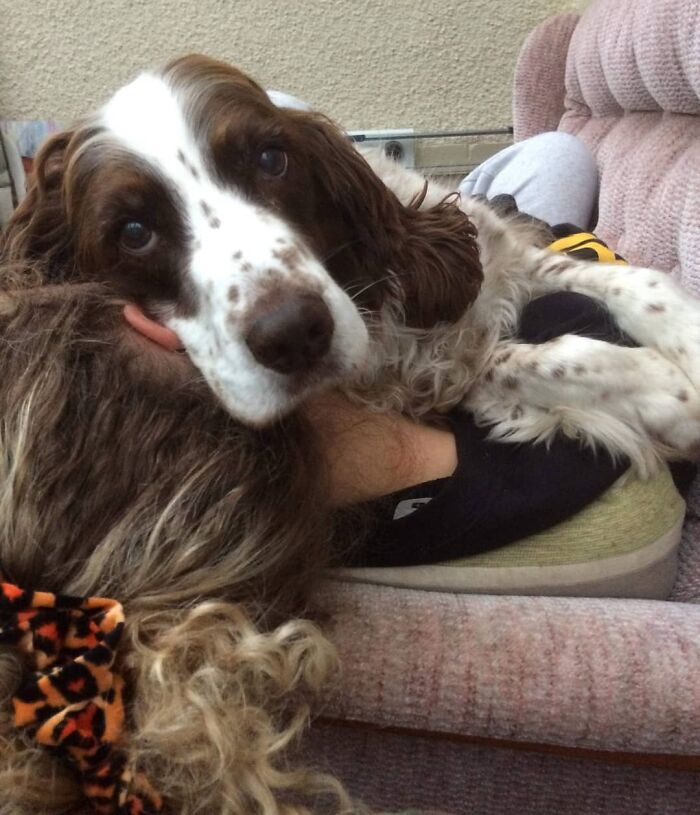 It is pretty evident that the owners love their dog and are willing to do anything to make sure he is happy! “We love our old boy so much and are so glad to have him in our lives,” Spike’s owners told. “Hopefully, we have made up for his not-so-good start in life by providing all the love in the world.” If you’d like to see more of Spike’s pictures and follow his journey, make sure to check him out on Instagram.

The story received a lot of attention and here are some of the comments from people.

We’re finally at the conclusion of our article and hope that this story melted your hearts too! Keeping pets can be a very tough job but if you care for them out of pure love, it will not seem too difficult! Pets have the ability to instantly uplift our moods which is rarely possible for anyone else to do. If you think that this story was very inspiring, or want to share some thoughts on it, do not forget to use the comment section below!