Have you ever thought about how the Komodo dragon looks like a little kid walking in dad’s shoes?  We have a lot of animal lovers among us. People adore animals, especially cute, little ones. If we think about our favorite animals, their anatomy and body functioning can be imagined in a very humourous manner. Our imagination is very vast and can be used to form any idea. There are no limitations to our imagination.

Animals are very cute creatures that live intriguing lives. It is fascinating how animals come in so many different species. Some animals are so tiny, it is almost unbelievable how little a creature can be. On the other hand, some animals can be so incredibly huge that they fill fear in everyone who even thinks about them e.g. animals and dinosaurs. Some animals walk too fast and others walk too slow e.g. sloths. While most animals have legs, some do not even have that e.g. snakes.

While there are already so many interesting things about animals, it is interesting to illustrate animals according to our vast imagination. Just like that, Dave Kellet is a creative mind who does not hesitate to showcase his talent in form of illustrations. He drew really funny and enjoyable illustrations of some really cute animals that will leave you in a fit of laughter.

Keep scrolling to see the illustrations! 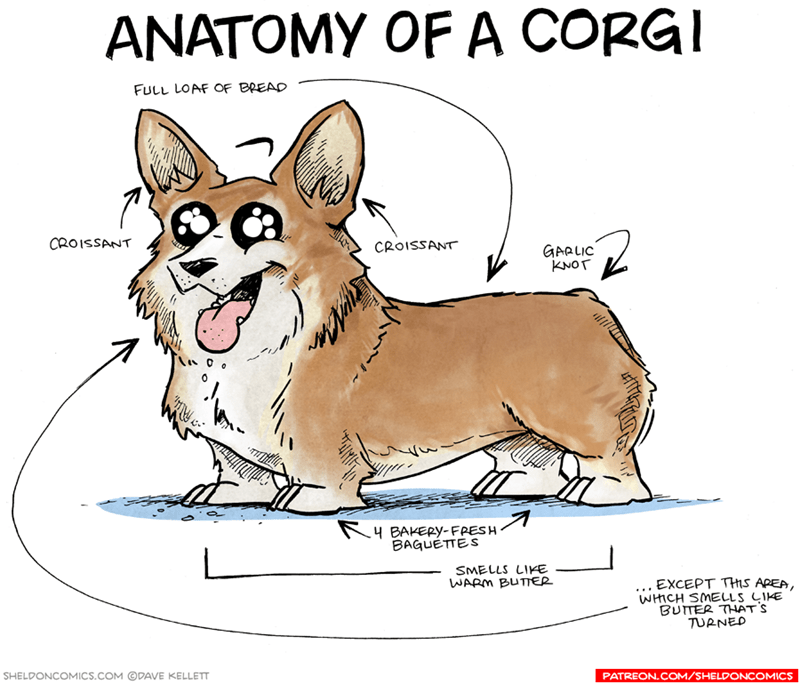 I am gushing at how adorable this illustration of Corgi is! Look at those eyes. Those eyes look exactly as how ours look when a waiter is coming towards us with our food order. Those ears do look like croissants. Those little paws resemble baguettes too.

While these little dragons animals can scare any human away, this illustration looks cute as hell! 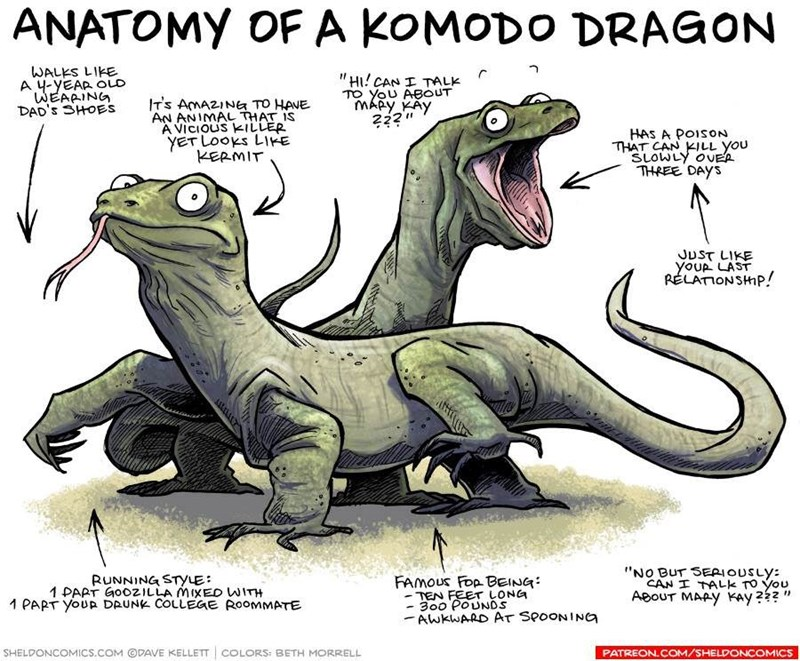 Their eyes are popping out like a kid’s eyes when they walk around in the house creating a mess. I cannot help but notice how these Komodo dragons look like toddlers in large-sized shoes. 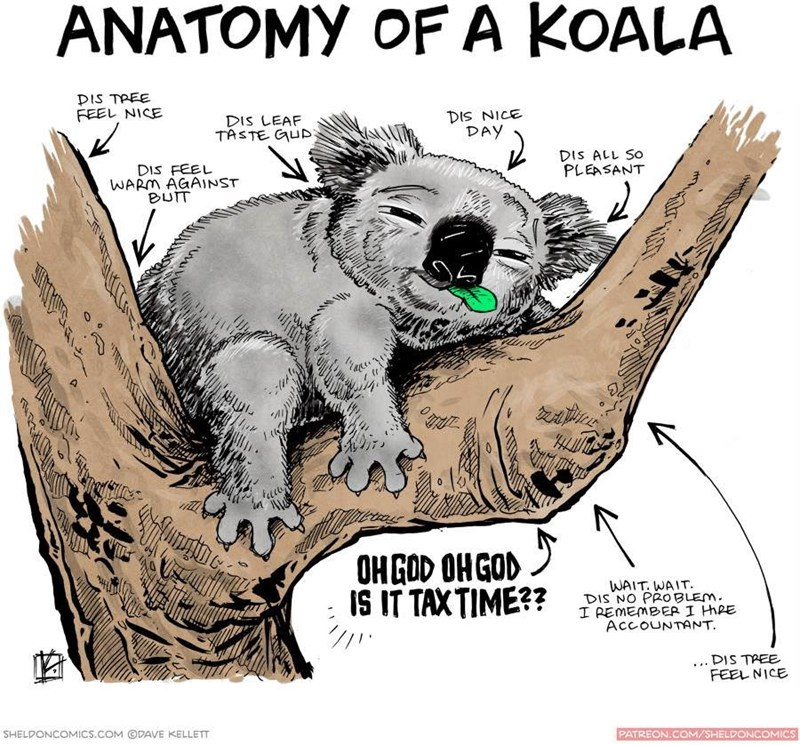 Koalas are one of the most adorable little creatures. Anyone who is intrigued by their existence thinks about what the life of a koala must look like. In case you did not know, Koalas are huge plant-eaters. They are known to be very fond of eucalypt leaves. Other than that, there consume other related species of tree as well e.g. corymbia species.

The face you make when someone is lying to your face, thinking you are not aware of the truth. 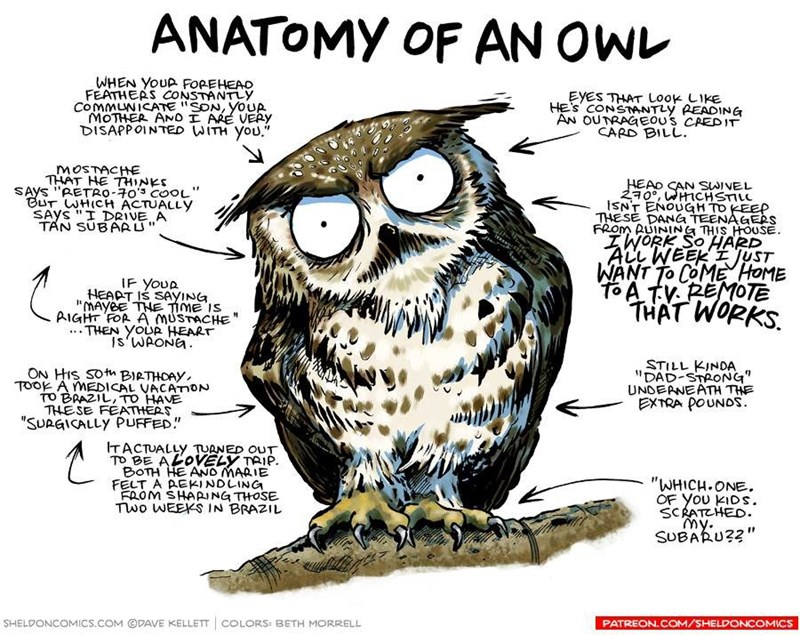 This owl looks like we just stole all his food and left him with nothing to eat. “Eyes that look like he is constantly reading an outstanding credit card bill”, that is a more accurate guess of what this expression looks like.

Eyes bigger than the entire face. 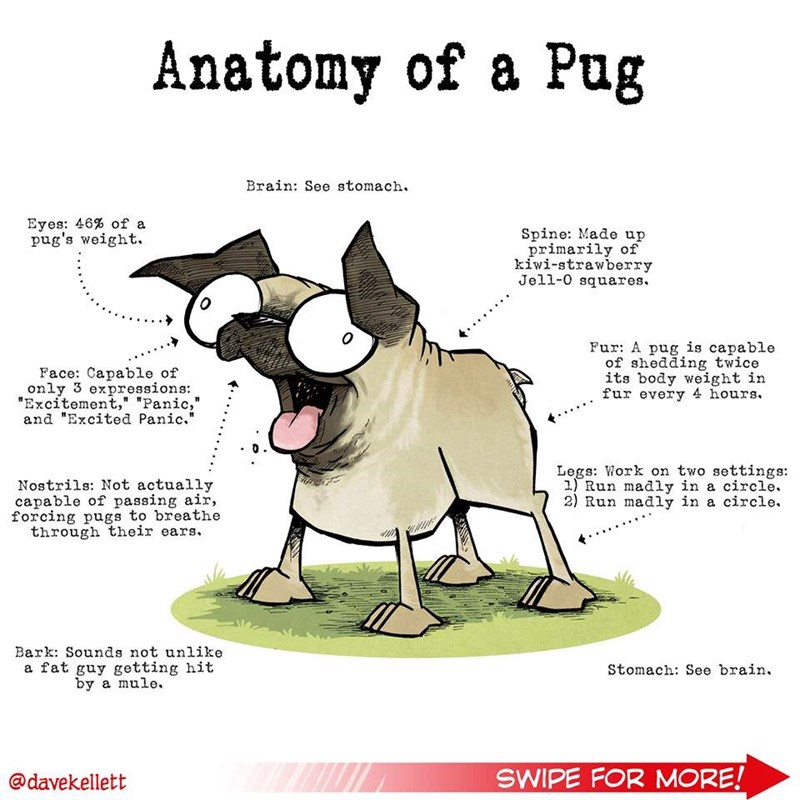 Those eyes are so big, it does look like they make for half of the pug’s weight.

We need the hell this rooster uses for styling its hair and feathers on its tail! 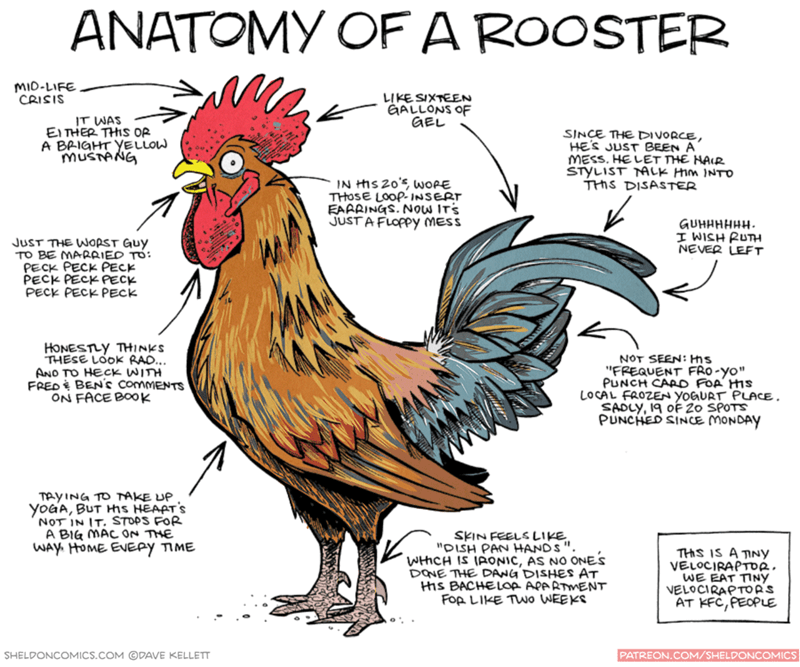 A rooster looks like someone styles its crown of hair as well as the tail with loads of gel! Whatever it is, we all need a supply of that.

He is sad because he realized he is old enough to go on bed rest. 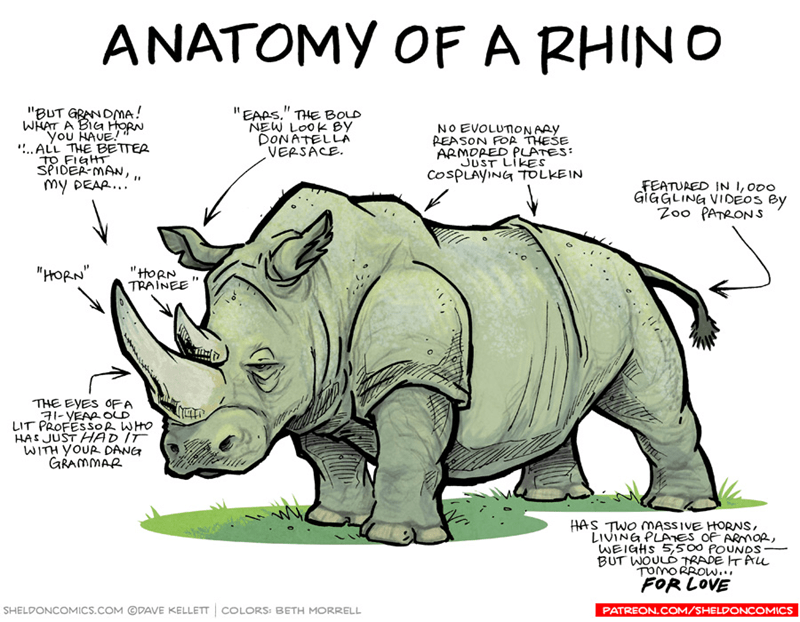 The chronicles of a snail! 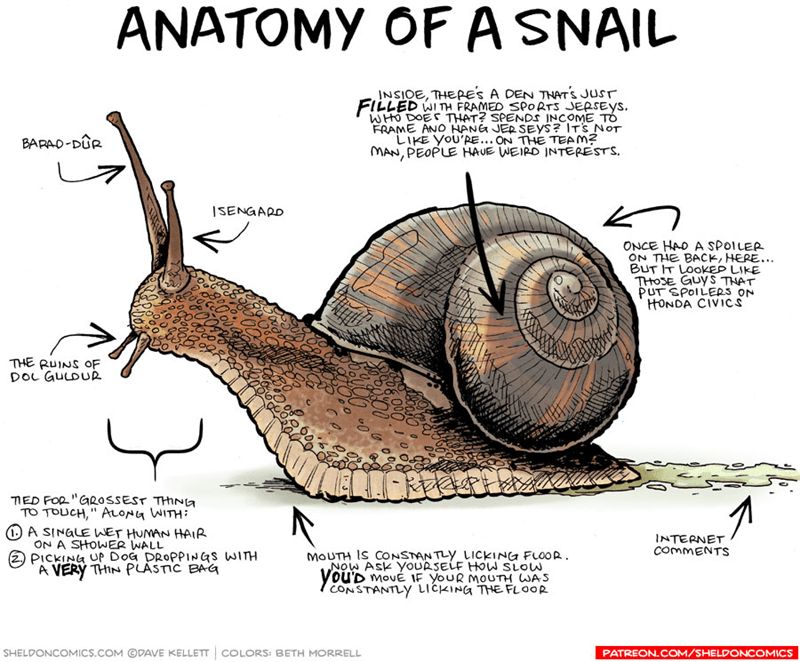 While those shells are found empty once the snail is deceased, there is no way to know what the snail may be hiding in the shell when it is alive. It looks like a secret den that has all of the snail’s belongings.

The animal that is full of life! 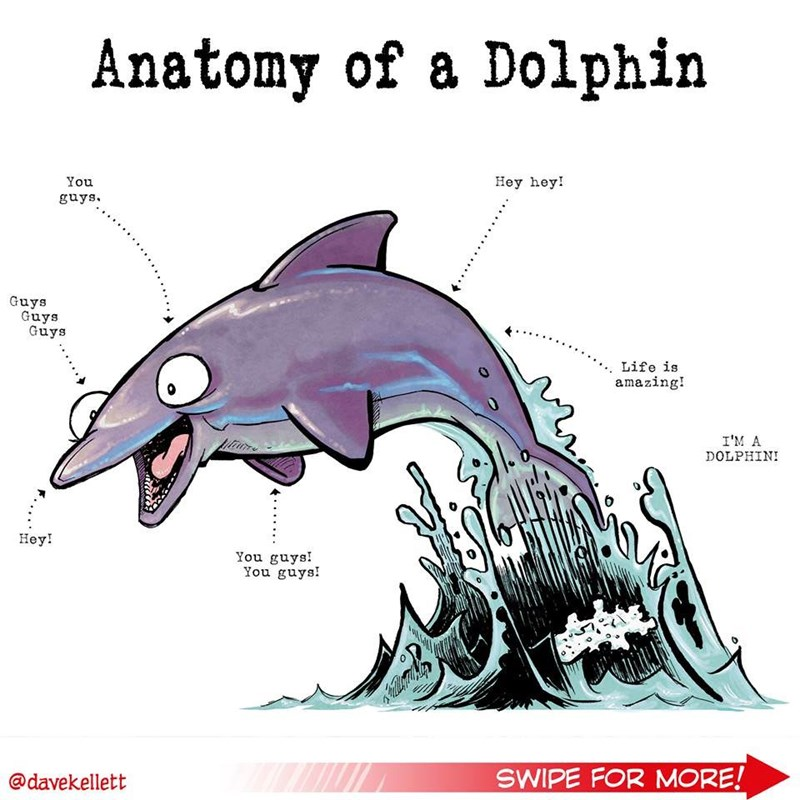 Making an illustration of a dolphin would not have been a brainer! We all know how excited and cheerful dolphins are. They must constantly use their energy to explore life to the fullest.

Life of a squirrel! 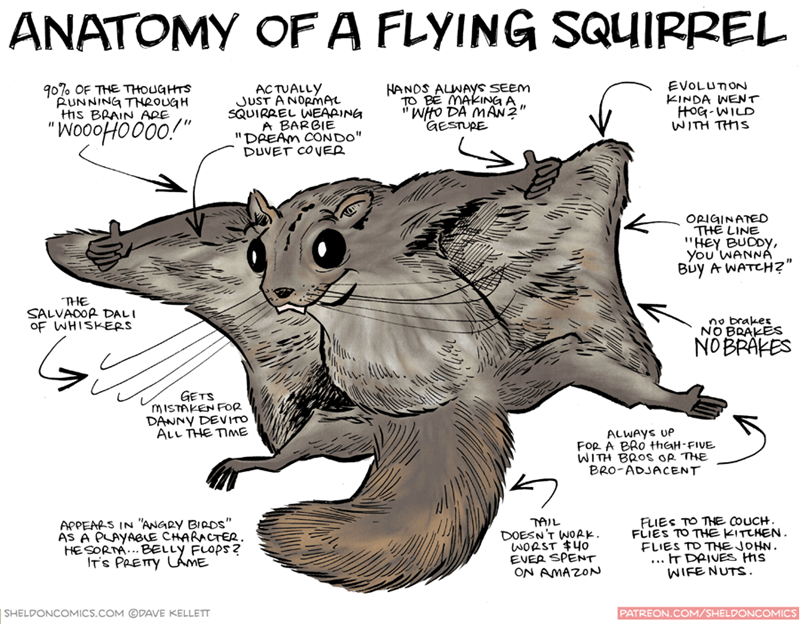 A squirrel looks like a ball of energy. It keeps crawling everywhere on the tree and the ground. It seems like all the muscles in its body are used to run away from danger!

Why doesn’t it have a face? 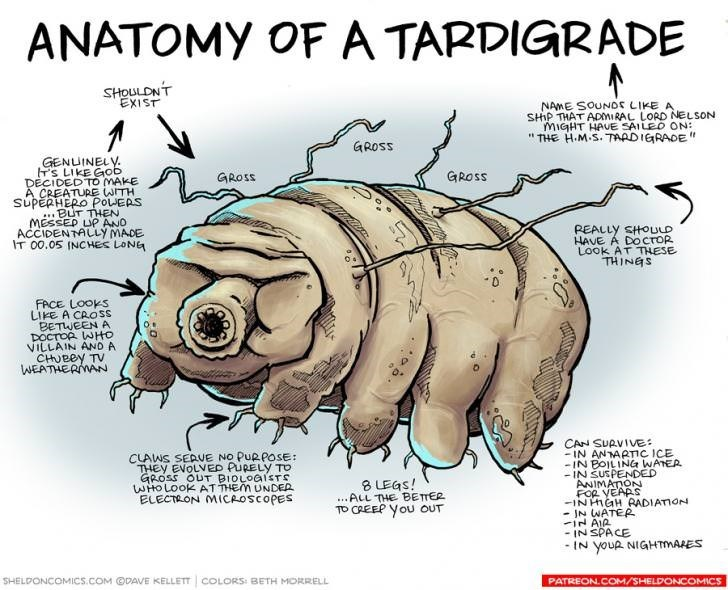 Illustration of our favorite guinea pig! 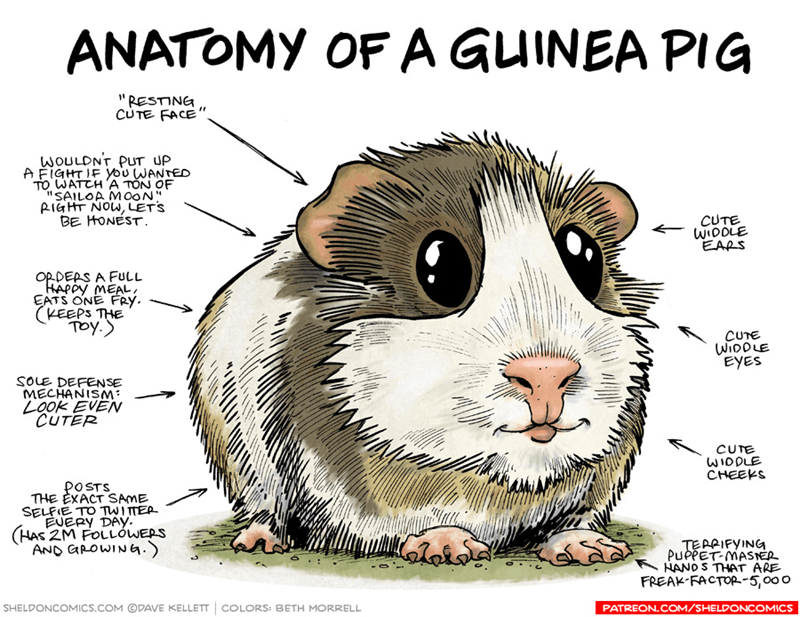 Guinea pigs are sent straight from heaven. Their adorable eyes always melt your heart and their cheeks look like they are blushing.

I am completely hooked on these illustrations and cannot wait for more! The artist really pushed all his potential to create these hilariously adorable illustrations. Every animal’s anatomy is broken down into such chucklesome parts. The illustration of the guinea filled me with love and the one with tardigrade reminded me of all the horror that exists in this world. Thank god tardigrade does not exist in the area I live in, or I would not have been able to sleep in peace.

Did you like these illustrations as we did? Let us know which one is your favorite!