We should be thankful for what we have.

I know lots of people who would do anything for a slice of pizza. There are many in this world currently who are starving and don’t have anything to eat. So if somebody is trying to help you, accept it rather than be arrogant about it. However, this guy apparently didn’t get that memo.

You see he was ‘apparently’ starving and asked his ex to get him some food. Now, that is weird in the first place but sometimes you have to do what you have to do to survive. Although when his ex was nice enough to order him some food, he decided to be choosy about what he wanted to eat. Sometimes being picky crosses the limit of human decency and this guy leaped over it.

At least he understands they have no responsibility towards him. 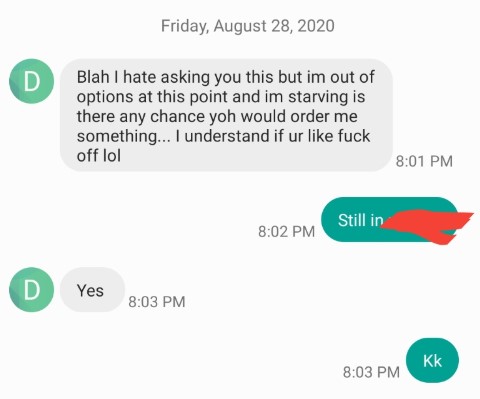 They didn’t waste any time ordering him a pizza which is more than most people would do. 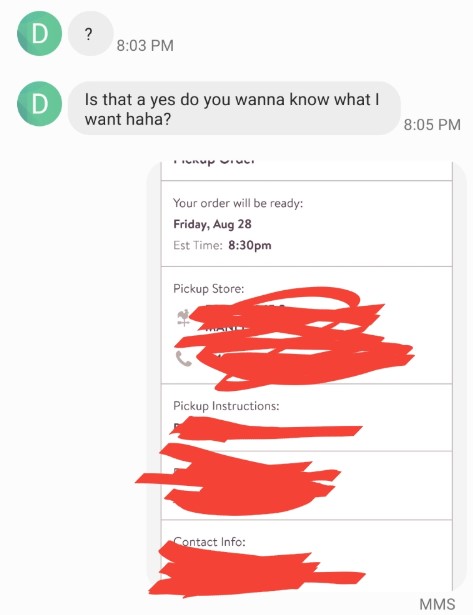 Sorry is not required in this situation. 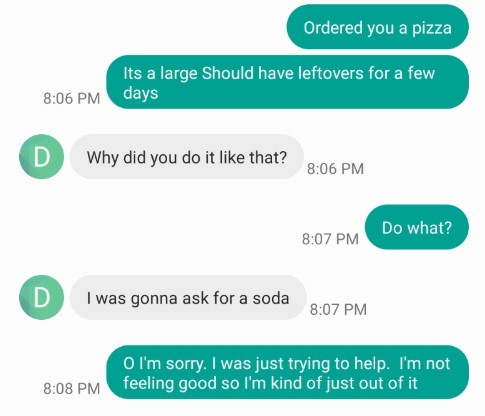 Besides the fact that pizza is great, he has the audacity to be so rude towards a person who is trying to help? 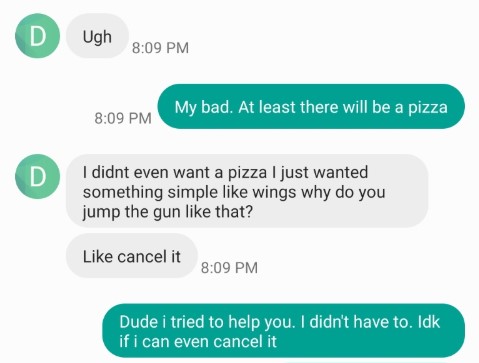 I sincerely hope you’ll grow from this -although bad- experience. I feel bad to see how often you apologized even though you didn’t have to, you also said you weren’t feeling good (not sure if you hoped he would comfort you or not) but he didn’t bat an eye. Just “ugh” because of a pizza.

I won’t say “stop being kind from now on” but instead, be kind to those who treat you with care. He might have been important to you but clearly, from this exchange, you weren’t.

I can’t tell you to block him because this is up to you and you know better, but although mistakes and bad situations can happen to someone, they’ll never “ugh” you because you ordered them a pizza after you admitted feeling bad. This really tipped it off for me and I hope you won’t give him more excuses because this action proved that he isn’t an a** just because of his “rough situation”.

Good luck OP. I wish you to find better, someone who will deem you as important too. –_Nana777

Even close family wouldn’t be this considerate in this day and age. 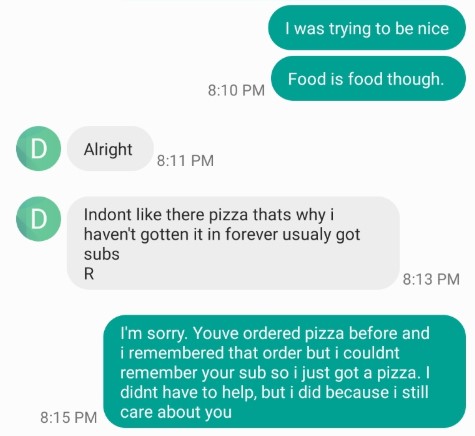 I would have canceled and blocked his number by now. 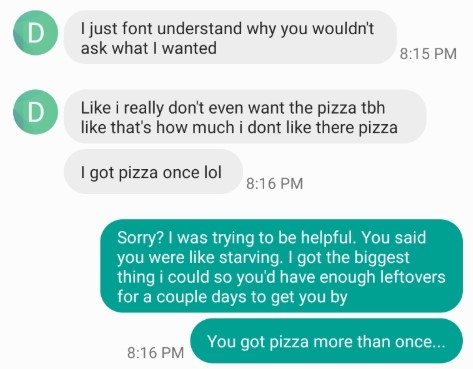 Well aint this a good life lesson. Be so glad you are not still with him and dealing with this on a daily, and remember you can’t help those who don’t want to help themselves! –s2inno

Thankfully they are not with him anymore. 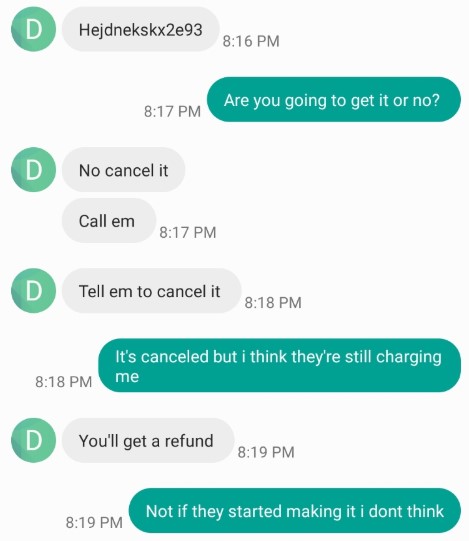 He doesn’t deserve your kindness. 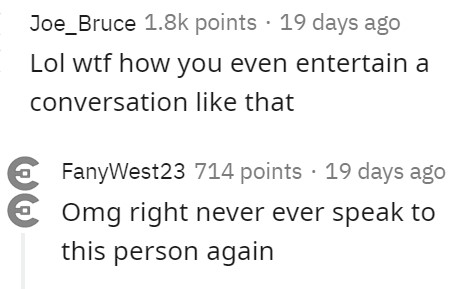 I’m a chump. I felt bad because i know he’s in a tough spot. I’m a stupid bleeding heart he took advantage of for months. –VioletArcana

I sure am glad to hear that. 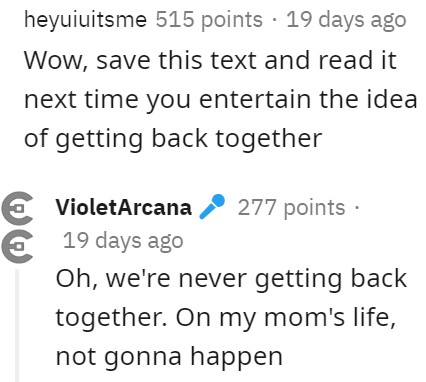 And then there was this gem in the comments, which is so sweet! 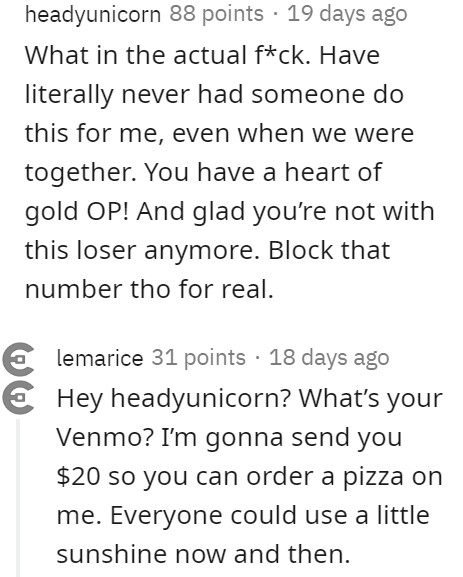 I don’t know anything about you but it’s easy to tell you are a good person with a big heart. Clearly he has been taking advantage of your good nature but you need to cut all ties with someone this toxic or they will drain you of all happiness, find someone else to leach off, and disregard you as he has with the pizza.

Please don’t let this asshole ruin your kindness, the world needs more people like you in. –fwippet

They might understand or you can get the pizza for yourself. 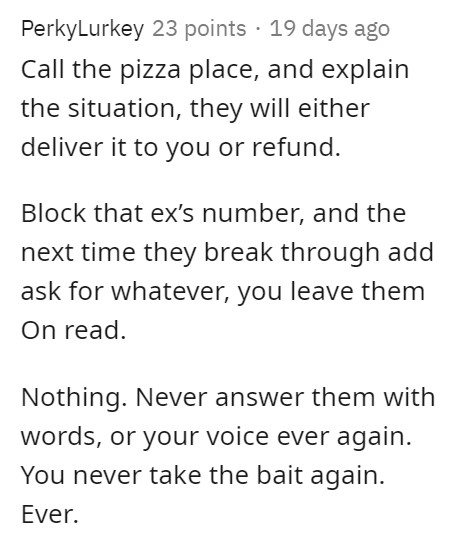 What did you think of the exchange between those two? Let us know in the comments below.