No kind of love can top motherly love.

A mother is that person in our lives that loves us the most, unconditionally and endlessly. Her love is the purest. No one can ever love us as genuinely as our mother does. Not even close. A mother is that member of the family who holds us all together like glue. A mother is a person who we can depend on and we can trust blindly. Our mothers are literally the biggest blessing of God. We would be nothing without our mothers. A mother spends her whole life looking after us. We can never repay them for all of the things they have done for us, all of the sacrifices and all of the care is too much. I am at a loss for words, I can not describe the greatness of motherhood. What an amazing feeling it is, what an amazing experience it is. Mothers deserve so much appreciation and love.

Similarly, I do not have enough words to describe the greatness of this new cat mom. She has left me completely speechless with her unusually sweet behavior. Keep on scrolling down to read the whole story of how this little kitten ended up getting adopted by another cat who recently became a mother…

1. Aww, look how adorable they are.

According to Love Meow, Pluto was a newly orphaned kitten, rescued and brought into Dorset Rescue Kittens. “He was critical when we got him. He hadn’t fed from his mom in at least 24 hours, likely longer,” The founder of Dorset Rescue Kittens, Cailey Seymour, explained. “He had to be placed in an incubator with oxygen support and slowly rewarmed and rehydrated before we could feed him anything.” 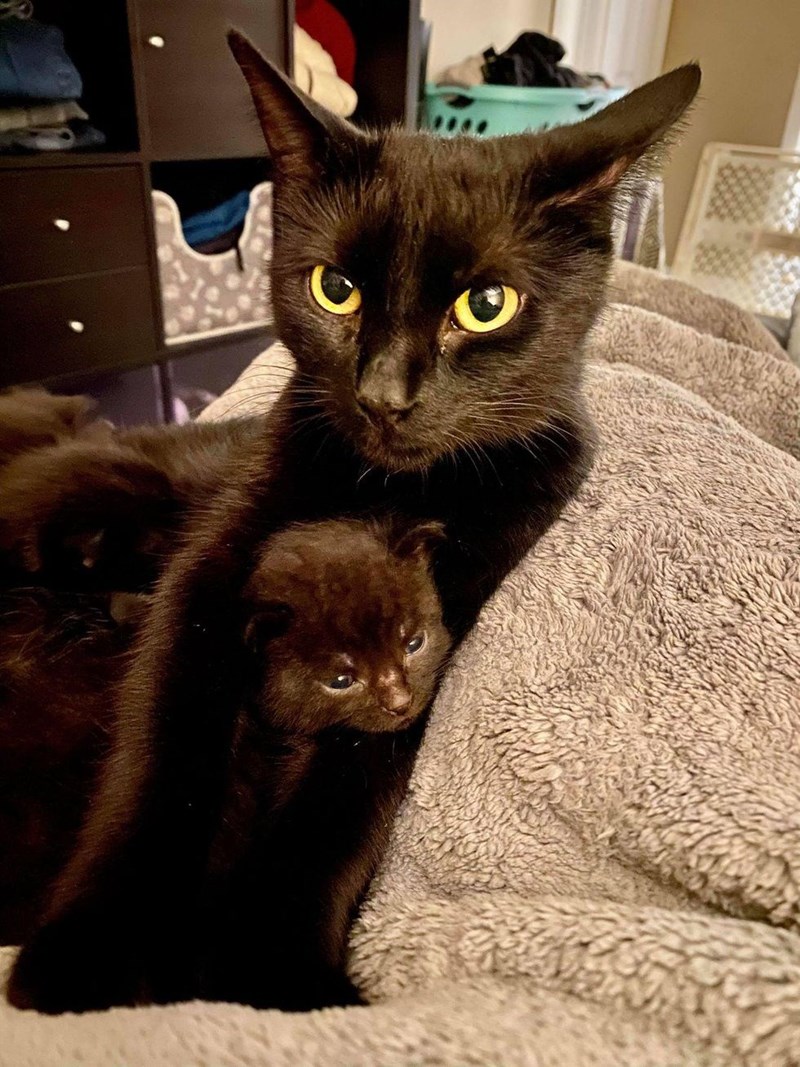 2. Oh, my heart! He is so tiny and extremely cute.

The very first night, Pluto was given food every single hour by his caretakers who also looked after him attentively. By the next day, he had some strength getting back into him. “We didn’t know if he was going to make it and were preparing ourselves for the worst, considering none of his siblings survived,” Cailey explained. “It took about five days before we felt he was on the road to recovery. He started gaining weight and eating really well.” Even though Pluto started moving around and started playing around with his toys very actively, he was still missing something. Despite the love and care of his caretakers, he was craving some motherly affection. 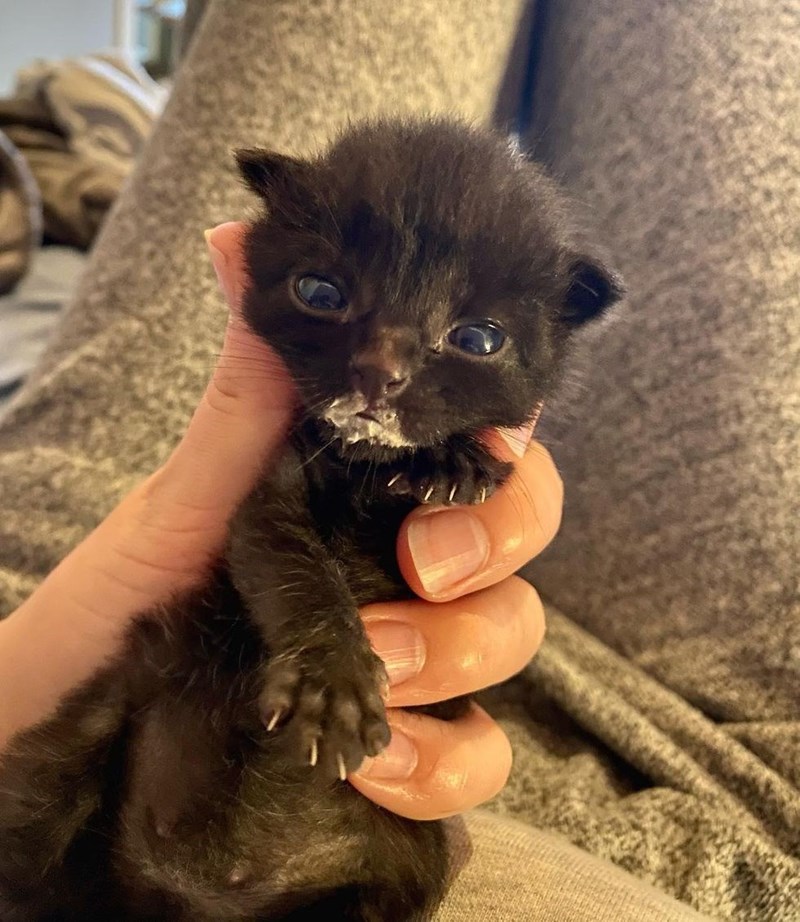 3. Their love is incomparable, unconditional and so pure.

Miraculously, It was only a week after Pluto’s arrival a feline family of 6, that included a one-year-old cat named Bib and her five 3-week-old kittens, came into Cailey’s care after being rescued from outdoor life. Luckily, the newborn kittens of Bib were almost the same age as Pluto. The shocking thing is that they all even looked alike. “When we got mama Bib, I knew it would be a good move to see if she would accept Pluto,” Cailey said. 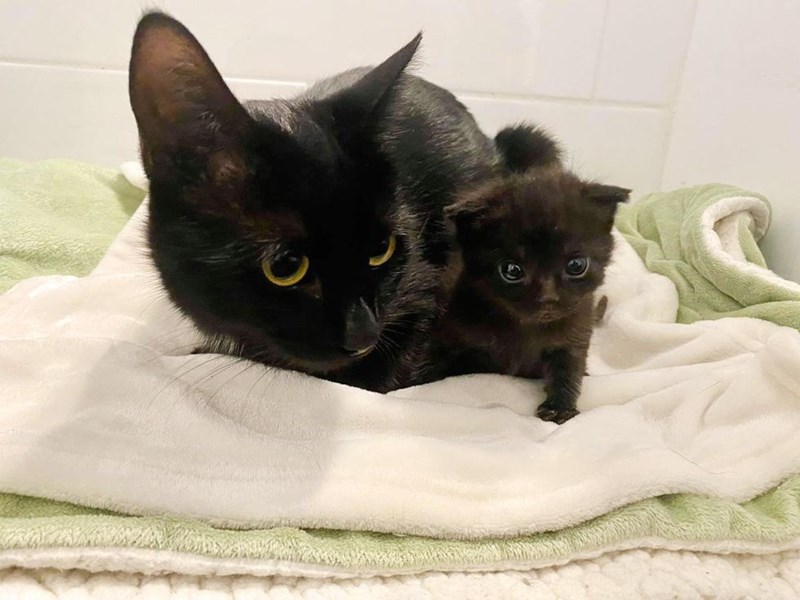 4. Please, have mercy on my poor heart for it can not handle this much cuteness. 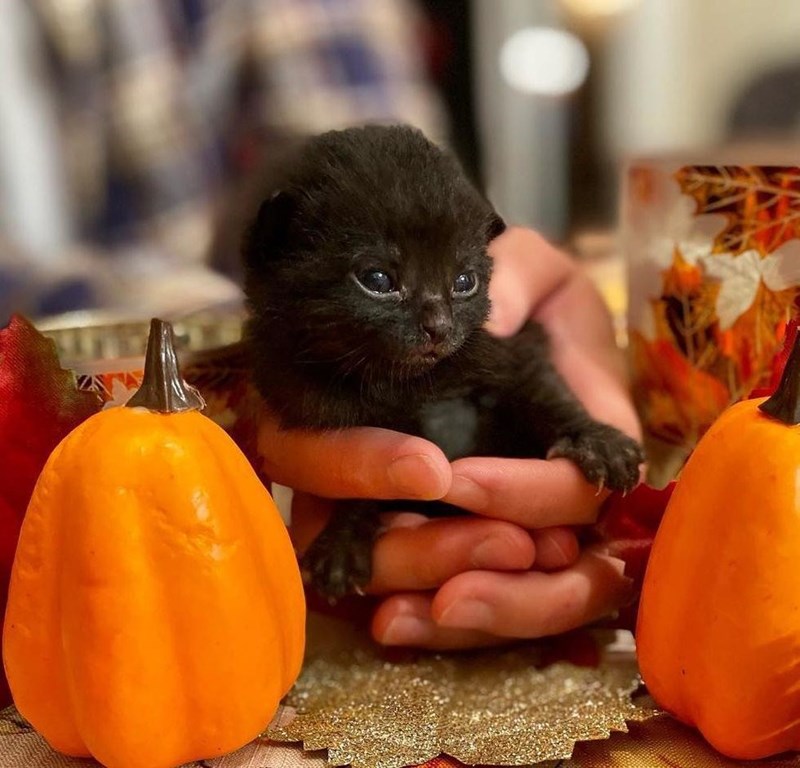 5. He blends in with all of the kittens so well as if he is their biological brother. 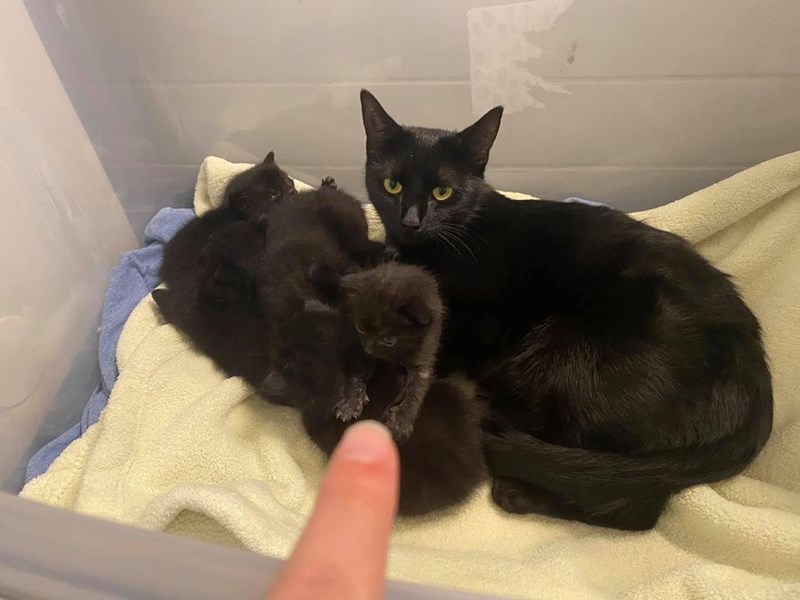 Oh, my heart. Cuteness definitely overloaded here. The images above really are so beautiful, they can really melt anyone’s heart. I am in love with this tiny kitten so, so much. Also, mama Bib was a bit hesitant in the beginning due to her new environment. It took her a while before she got used to it all but eventually, mama Bib grew comfortable enough to start enjoying the company of the humans around her. One day, when they thought it was finally safe, Cailey wrapped baby Pluto in a blanket, placed him in front of mama Bib with so much hope that she would accept him as her own. It was very shocking to see all of that actually happening, mama Bib calmly approached baby Pluto and started tending to him without any hesitation. It sounds like music to my ears to hear that information. It definitely surprises me a lot since all I ever heard is that animals are not that friendly with other animals’ children but this proves everything wrong. Even though it all happened due to some bad incidents but I am so glad these two got to meet each other. They both look so good together, let alone the fact that they both naturally look so much alike. Keep on scrolling down to see more cute pictures of these two cuties and read their whole story…

6. This image is just so beautiful, I am out of words to describe how perfect this family is.

“She didn’t even second guess it. She started grooming him and nuzzling him towards her own babies as though she knew he needed her. She has been so accepting of him—it made me cry,” Cailey told. Pluto melted into the arms of his new mother so perfectly and easily as if they were never strangers and as if it was all meant to be. 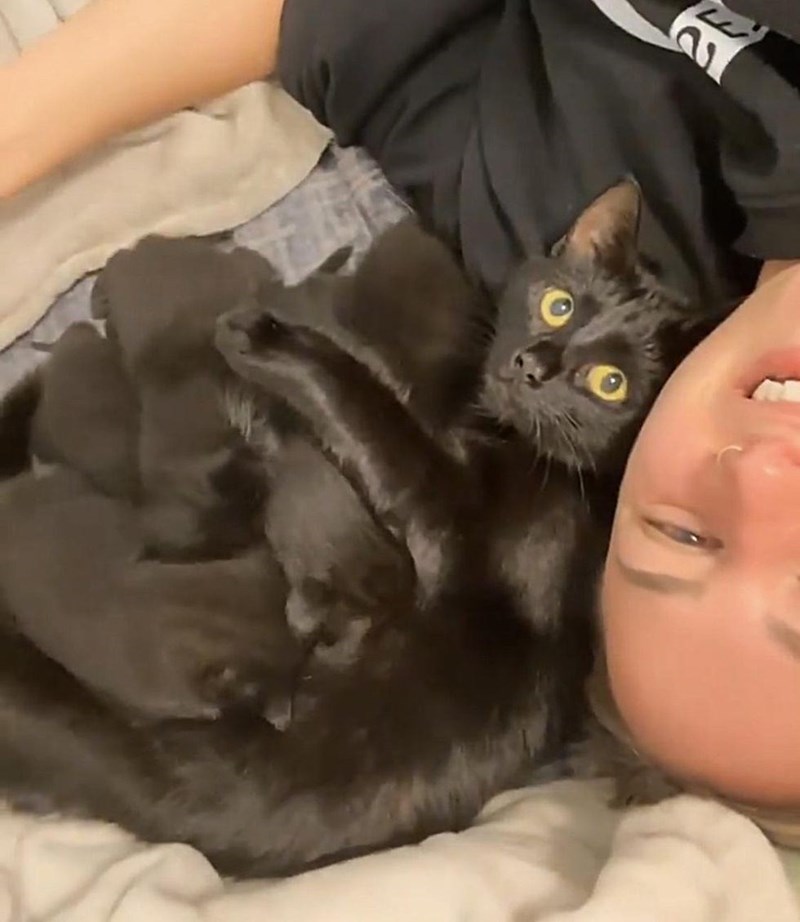 7. Such a great mother she is.

“We put him in with the other babies so that he stays warm and can play with them. We are still supplementing him with kitten milk replacement as that is what he is used to, but it is so beautiful to see him with a family.” Even though Pluto still drinks bottled milk but he fits so perfectly into his new family as if he was actually their family. Pluto snuggles and plays with his new siblings all the time. “She usually cuddles him while her babies nurse,” Cailey talked about Bib. 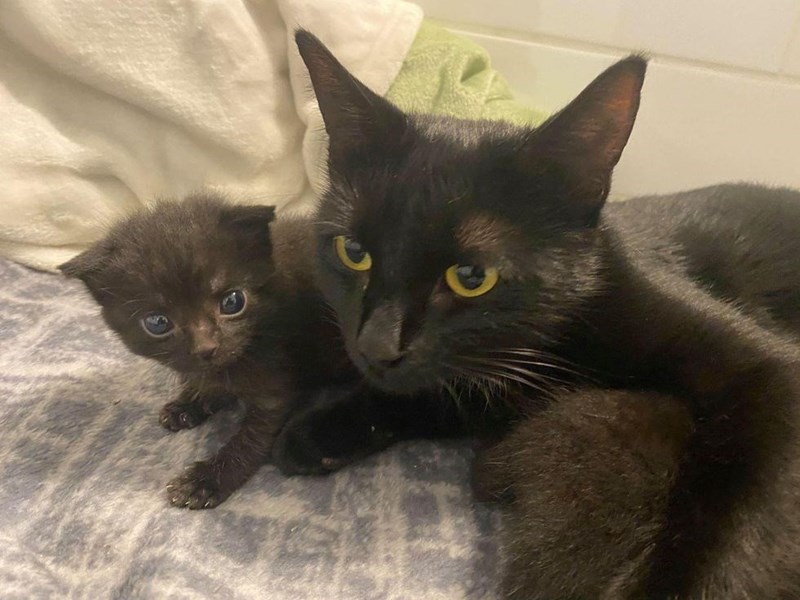 “Nothing compares to the care a mama cat can provide or the socialization a kitten gets when raised with kitten siblings,” Cailey told. “Pluto is already playing with them and talking to mama as though he has known her his entire life.” 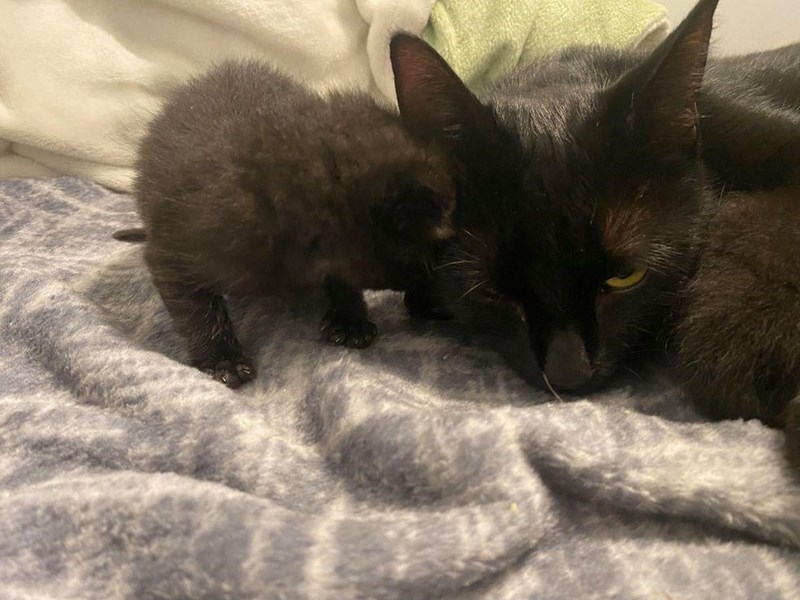 9. This cat is setting a perfect example of how pure motherly love is. Humans can too learn from this cat.

“We will continue to bottle feed Pluto as needed and keep a close eye on him, but for now, I can put away his stuffies and heating pad, because he has been granted the privilege of mama cuddles and kitten snuggles.” said Cailey. 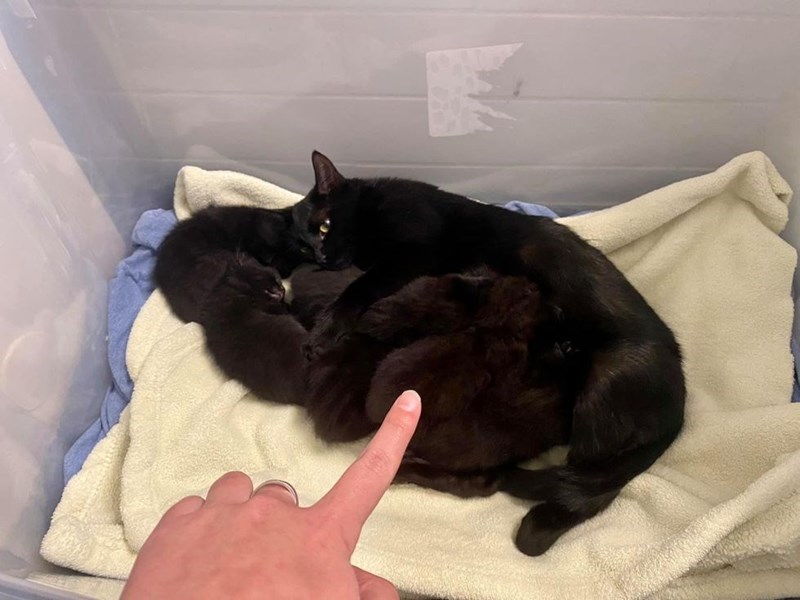 10. What a lovely mother-son duo. It surely proves to all of us that cats are very caring and loving creatures. 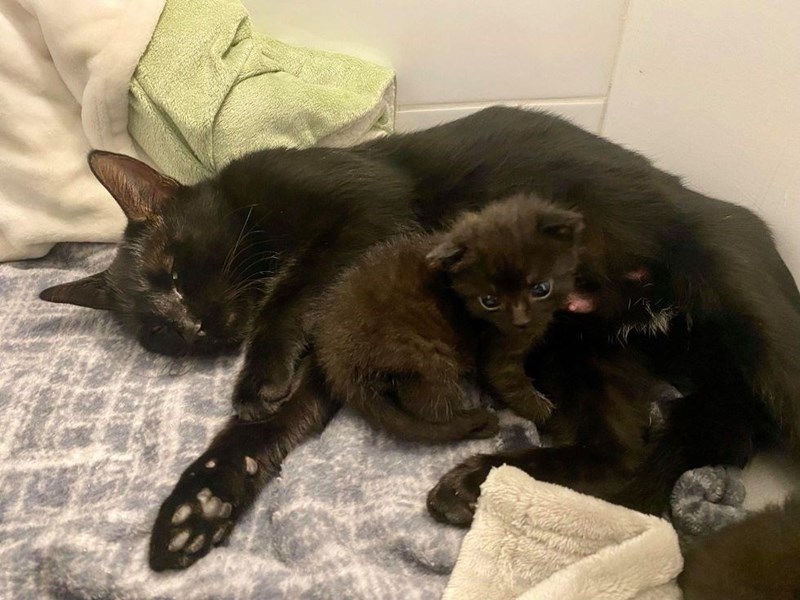 I would be lying if I said that their story did not make me tear up, at all. It was so emotional and touching. Everything about this story is so wholesome. It was totally so magical and surreal like a dream. How many cats have you had as a pet? Did any one of them give birth? Let us know in the comments down below…