Cats have dominion over all other creatures.

You might think I am making this up but haven’t you ever seen a cat scare a pitbull or an even bigger creature. No matter how scary a creature is, cats are always much scarier even though they look adorable most of the time. After all, there is a reason humans are fine with acting as their butlers. Because we know that when one day they take over the world, we want to remain in their good graces.

If you don’t believe me, you can see for yourself by scrolling below. No wonder cats were worshipped in Egyptian times.

Cats in ancient Egypt were represented in social and religious practices of ancient Egypt for more than 3,000 years. Several ancient Egyptian deities were depicted and sculptured with cat-like heads such as Mafdet, Bastet, and Sekhmet, representing justice, fertility, and power. –Wikipedia

#1 Even those dogs know not to come close to the black cat or mess with her.

#2 She is just trying to feel for her food so she can throw most of it away.

Meggie knows how to communicate despite being deaf and blind.

#3 These two want their hooman to stay home and take care of them.

My cats don’t like that I go to work so early in the morning now (health care) so they apparently staged an intervention.

#4 That is one big cat with a glorious mustache.

#5 Is anyone really surprised at this point?

Took a pic of the cat lookin’ out the window and accidentally turned him into some sort of god.

#6 To be honest, that position does seem weirdly comfortable.

#7 Even the criminal is having a laugh at the cat.

#8 I would have never thought that the face was swapped.

#9 You might think this particular plant needs water but if you water it, be ready for a lot of scratches.

#10 She only wants her teeth back.

After having a tooth out today, my cat decided to use her fish dinner as false teeth.

#11 Sometimes you don’t even have to press it.

You press the beans, you get the means.

#12 He was just trying to find the best position.

#13 ‘I particularly like this meownificent art. The colors are just purrfect.”

A friend of mine has bathroom art for their cat.

#14 This is how cats will take over the world, through alpacas.

What is the weirdest thing your cat has ever done? Why not let us know in the comments below. 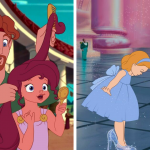 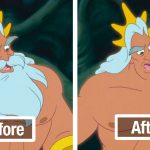 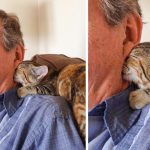 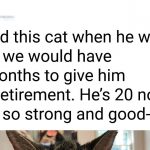 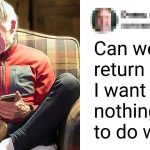