When you want the cake and eat it yourself as well.

We all have bad experiences with our bosses. And that is exactly the reason employees should always band together so they can at least help each other. However, it can be quite opposite in some places. Some people just want to get under your skin and have unnecessary competition with you. Where no one ends up winning and you are left with a sour taste in your mouth.

That is the only way I can explain what happened to this person. You see, this girl wanted to leave early so she asked her coworker to take over for her. It sounds normal enough until it gets to the distribution of tips. Apparently she wanted her to work for free and give her the tips even though she would have been gone.

Now you may think this is bad but not worthy of revenge. However, she took things to the next level and our original poster happily complied with take her revenge even further.

We can already tell that they didn’t get along beforehand. 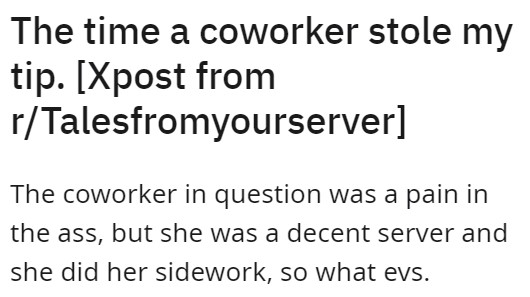 So she wanted her to work for free? 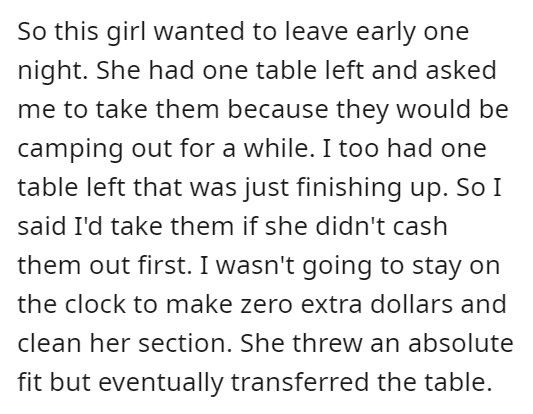 If she was going to stay the whole time, why transfer the table? 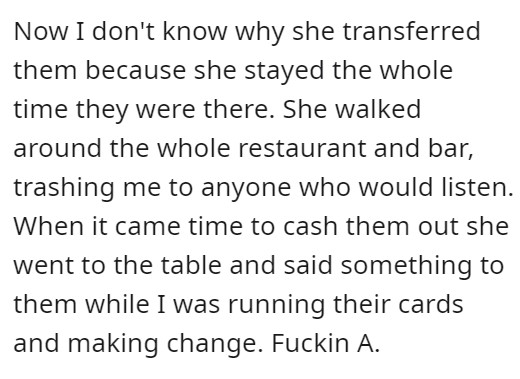 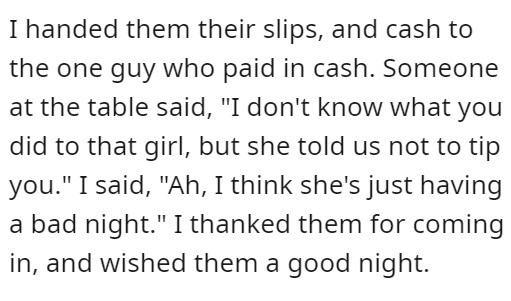 Not only that, but she also stole the tip that was rightfully someone else’s. 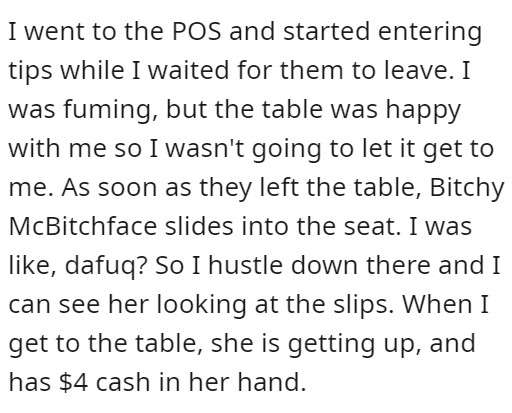 Anyone would blow up if something like this happens to them. 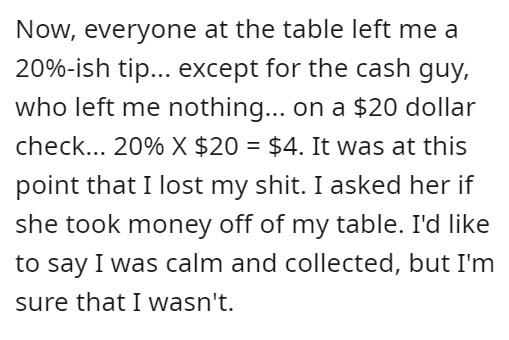 Everybody knew who was in the right but they couldn’t do anything without proof. 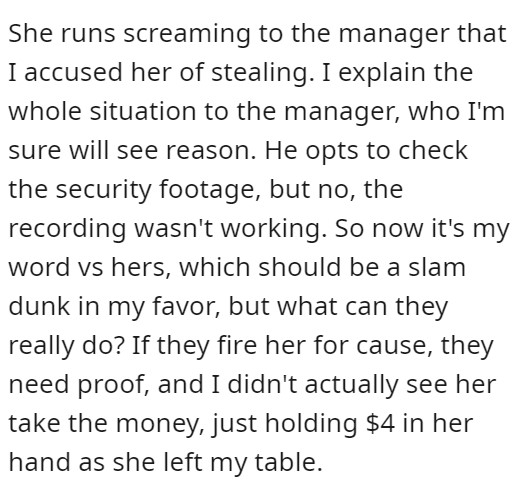 Why should she apologize? 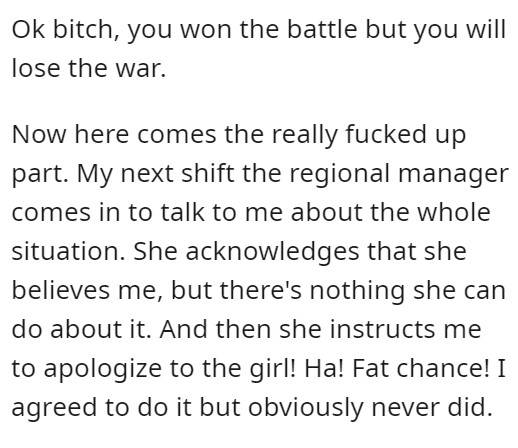 It’s appalling that the regional manager would tell you she believes you, then tell you to apologize. There may have been nothing she could do against that employee, but rewarding bad behavior is terrible management.

Since she was the regional manager, she wouldn’t be the one stuck having to work in the unpleasant environment after the shittiest employee feels vindicated and emboldened and other employee morale suffers as a result. She probably figured that as long as she can say she resolved the conflict at the time, she can wash her hands of it.

She should have just asked you to drop the matter since nothing could be done. Instead she added insult to injury. –8763456890

She sounds like really easy prey if I am being honest. 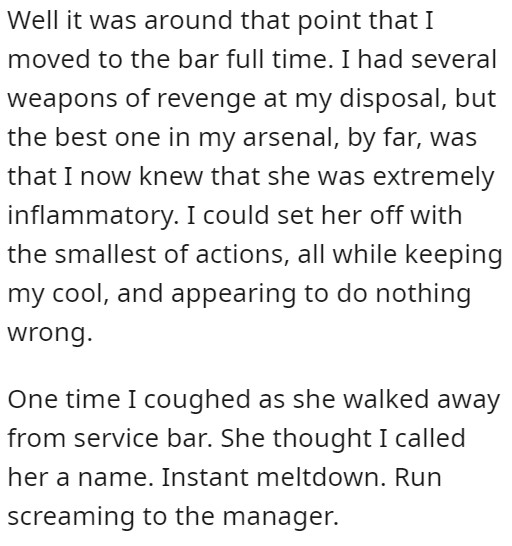 Was she mentally okay? Because this doesn’t sound like the behavior of someone who is. 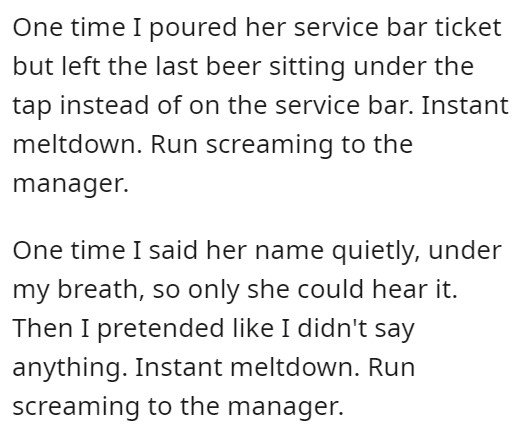 Methodical, sustained course of revenge all the while keeping your cool, slowly chipping away at the other person causing them to lose their cool over time and in turn get themselves fired. Well played OP. –MingusDoo

I would feel bad for anyone else in this situation but not her. 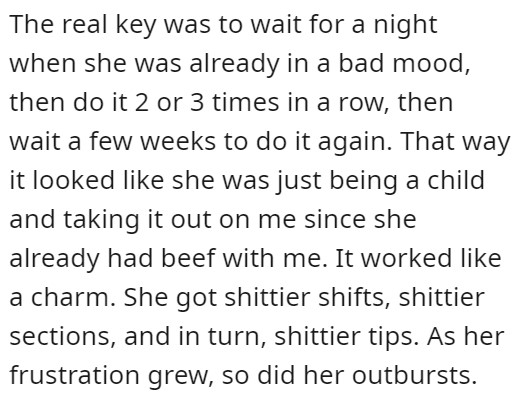 It was so satisfying and I wasn’t even there. 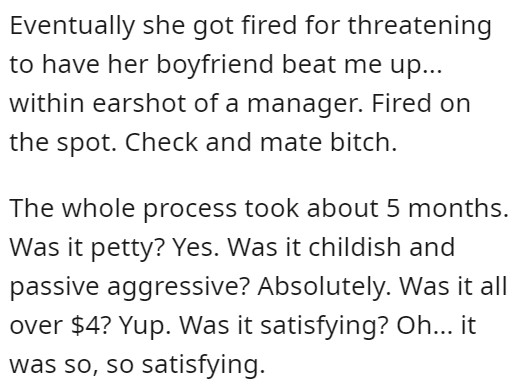 For those who didn’t want to read the whole post.

What would your response be if something similar happened to you? Let us know in the comments below.