I’ve had free cake a few times and let me tell you it tastes much better than what you pay for. However, I have never asked someone to bake me a cake for free. Why? because it is clearly wrong to ask someone to do that especially if you don’t even know them that well. However, this particular co-worker saw no issue with it. Because she decided it was okay to demand a Ferrero rocher and Lindt truffle cake from a co-worker she barely knew.

I am sure you already know these chocolates are quite expensive so it really isn’t fair to ask someone to do that. And if you want a cheap cake. Bake it yourself, It really isn’t that expensive or hard to make a simple chocolate cake at home. And it would be much better to do that than demand something from someone you don’t even know.

Not only that she also wanted to pass off the creation as though she made it herself which makes it even more worse. Following is how the conversation went.

She had to make sure that it was free after all. 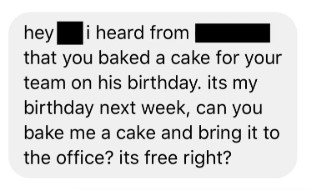 I would never be this nice to a person who just wanted something from me. I’d flat out say no. 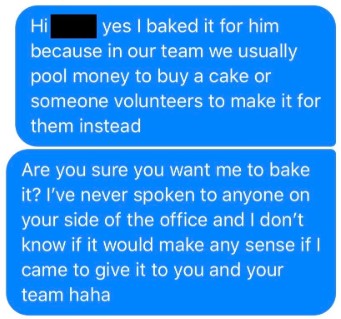 She basically means so I can pass it off as my creation. 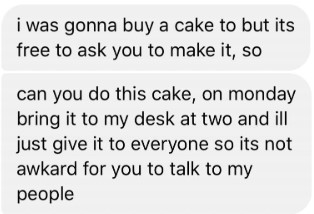 She even had the gal to send her co-worker a picture of ‘what she wanted’. 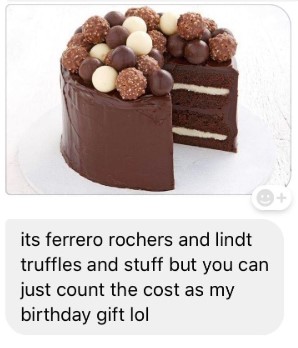 Even after all that, this woman was nice enough to offer a box cake.

Thankfully she refused so she didn’t have to deal with this anymore. 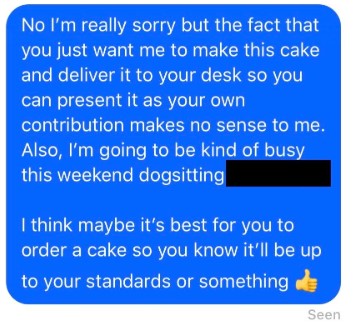 If you don’t have the money for a Ferrero rocher cake just get another one or bake one yourself. 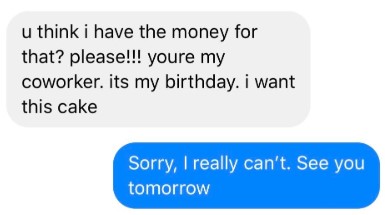 What is HR going to do? Reprimand her because she didn’t want to bake you a free cake? 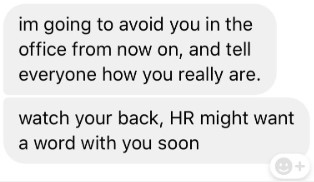 At my job some recently something similar kinda happened. For someone’s birthday, they surprised them by putting a bunch of balloons and some banners and stuff at their cubicle before they came in, just a friendly little jester for their birthday. Will the next person’s birthday comes around, and they come into work and their desk wasn’t decorated at all. As far as I know, this person isn’t as well-liked as the other, and the people who decorated the other person’s desk aren’t really friends with the person who didn’t have their desk decorated.

So they send an email to the whole department saying that if one person’s desk is decorated then everybody’s desk has to be decorated because it’s not fair otherwise. I didn’t know what was happened at the time that I read it, but it sounded super immature and like someone was really jealous, because that’s exactly what it was and it read that way.

This never quite made it to HR, but management just said to start decorating everybody’s desk at their birthday that way no one is upset. It isn’t a big deal I don’t think either way, but it’s pretty stupid that someone was upset that they didn’t get this tiny little thing that ultimately means nothing or means that one person is slightly more popular. She said either everyone gets a decorated desk or no one does, cake could be the same way. –omaharock

I honestly have no idea what is wrong with people these days. 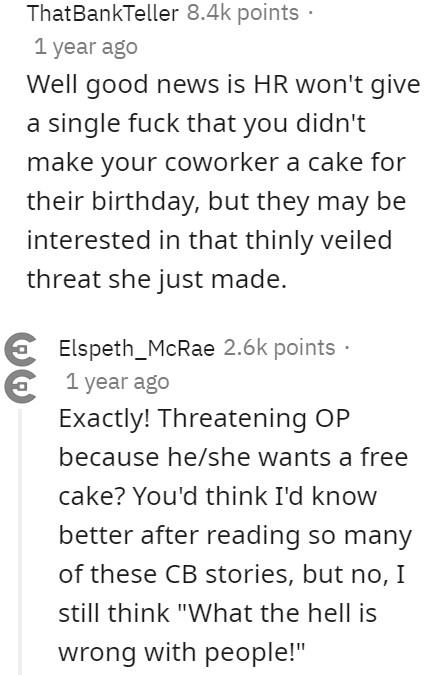 That would be an interesting experiment but would disrupt the work area so probably not the best idea. 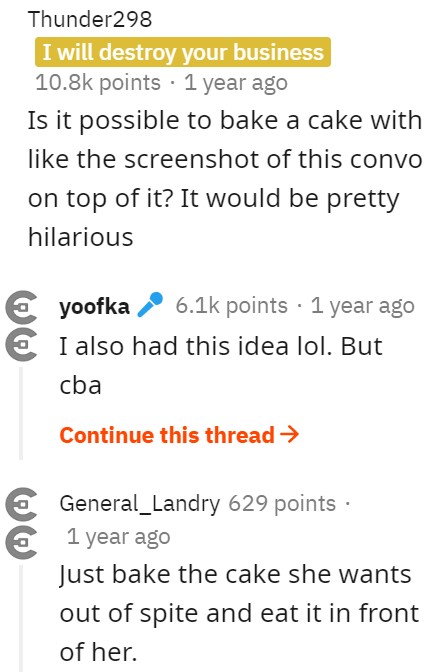 She was just being nice by ‘offering’ to take the ‘blame’. 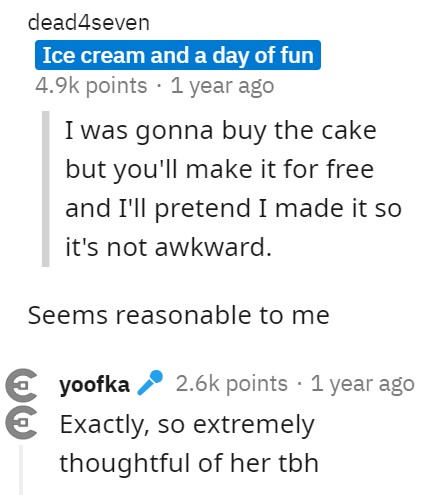 How would you respond if your co-worker asked something of you like this? Let us know in the comments below.