This girl sure does have a crazy imagination.

I can understand deciphering some hints and thinking someone likes you but you don’t go telling it to everyone until you are perfectly sure. And if you are sure, why tell anyone else about it if they aren’t acting in an uncomfortable way? However, this story is about a girl who just kept lying that her boyfriend’s roommate likes her even though she straight up hated the girl. Not only that, but I pretty sure I can sense some sort of homophobia in this.

Since at first, she was scared that she liked her boyfriend even though he had told her repeatedly that she was a lesbian. Then she moved on to accuse her of something else. I don’t know about you, but I am well aware that just because someone is gay doesn’t mean they will find every person that has the same gender as them attractive. You can’t expect a straight person to like everyone right? So why think like that when it comes to anyone else?

You can check out the whole story by scrolling below and taking a look for yourself.

How is one supposed to ‘look gay’? Wear a lot of flannel and have short hair? 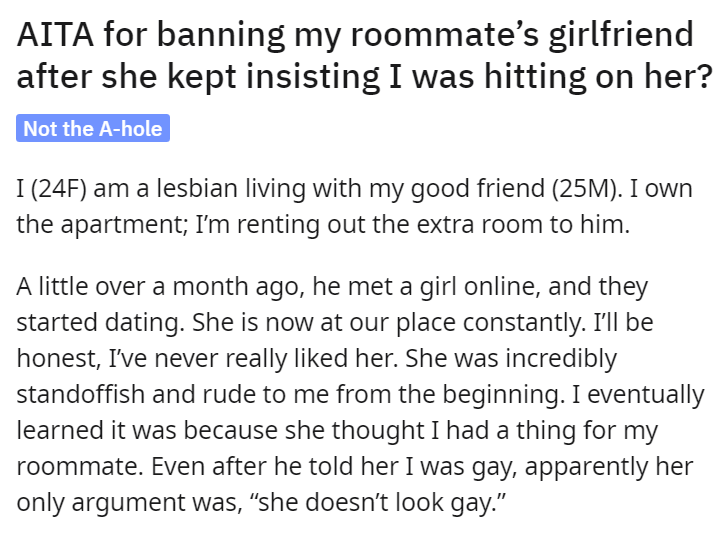 This is why I say, ‘always be suspicious when someone is being overly nice.’

Miscommunication? How is that even possible? 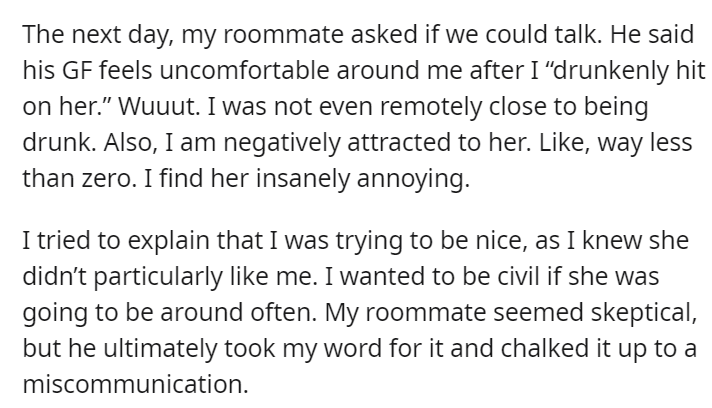 Is her ego really that big that she can’t fathom the thought that someone doesn’t like her?

Honestly, this was the only way to get the truth out there.

And he will come to his senses when the initial ‘love’ wears off. 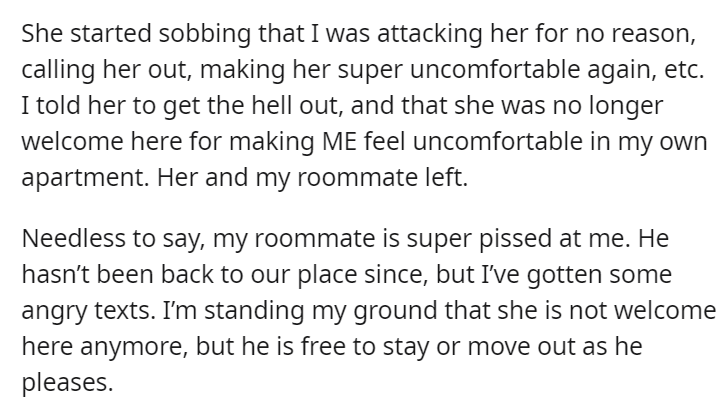 A little info for anyone who was thinking they weren’t following the lockdown rules. 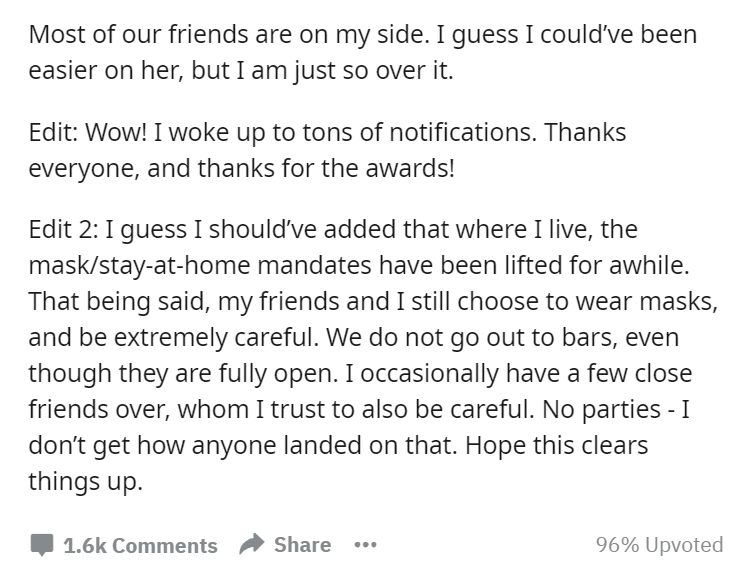 I was once paired up with a group of four girls (two beds, two girls in each bed) for a school trip to Washington, DC. These girls were not in my friend group, the more popular ones, and none of my friends were going, so a room change was pointless. I planned on staying cordial and mostly minding my own business for the entirety of that hotel stay because I didn’t like those girls (they were quite mean) and surely wasn’t attracted to them.

Queue two weeks before the trip. My teacher pulls me into his office, says I have to purchase a hotel cot to sleep on because the girls are “scared” to share a bed with me because of my sexuality. I point-blank refused and told him that I was not going to sleep on an uncomfortable cot at MY expense because these girls were homophobic. If needed, I would personally tell them that frankly, I don’t find homophobic people attractive and if they were that worried, they could buy their own cot.

The trip was cancelled because of COVID-19 anyway, but still blows my mind that my teacher, who was also the science Olympiad and quiz bowl coach and knew me very well, went along with that in the first place. –lesbianclarinetnerd

Who knows at this point really? 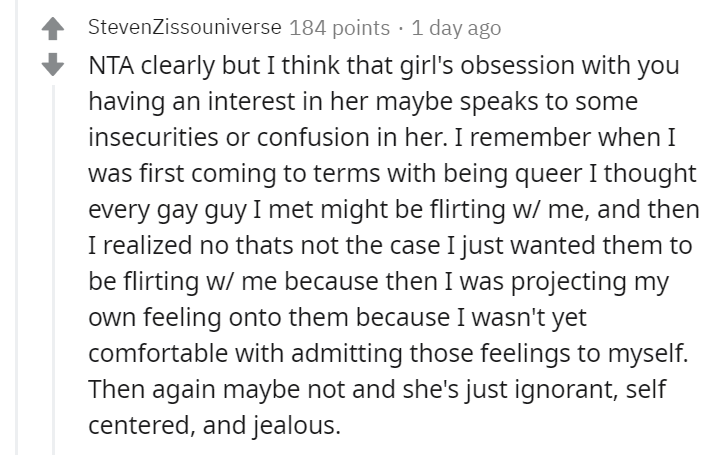 Maybe she wanted him to move out? Perhaps she is jealous? 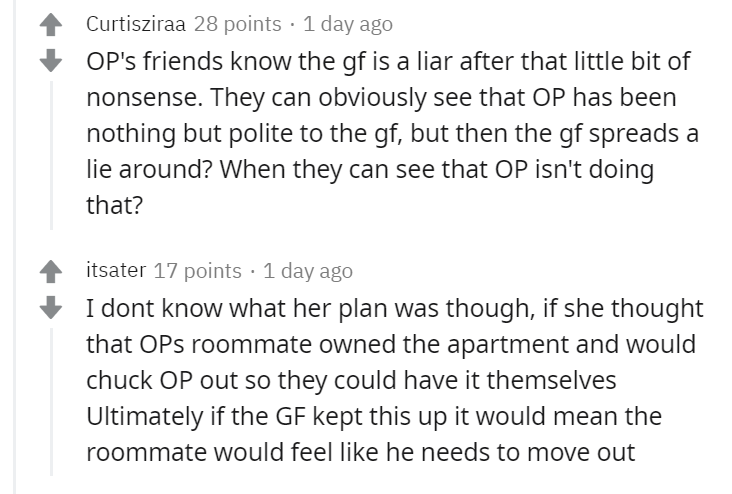 All I can say is that her thought process makes no sort of sense at all. 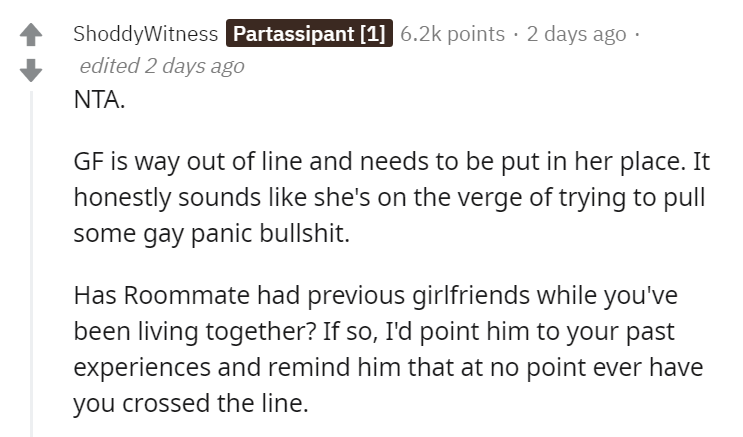 He will realize everything when it is too late. 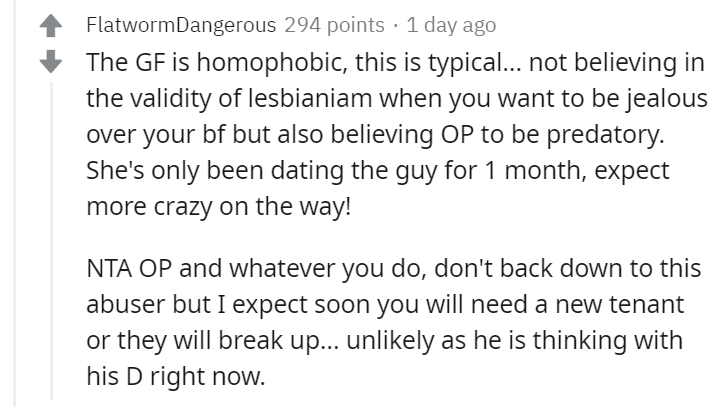 She clearly needs some sort of help. 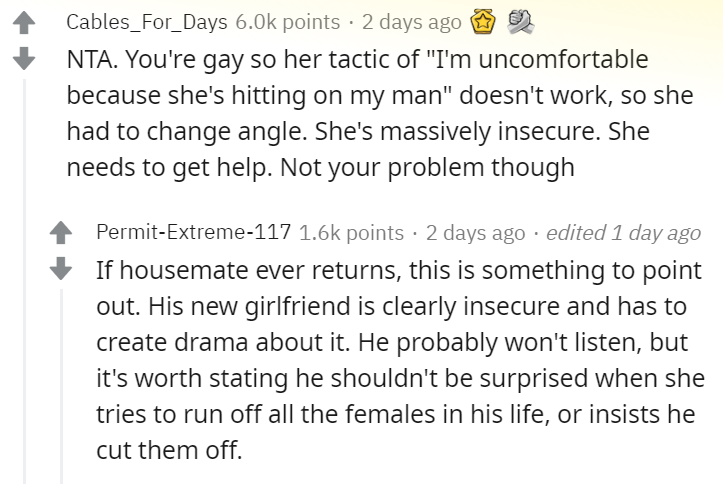 Hopefully, he comes to see the true face of his girlfriend soon enough. 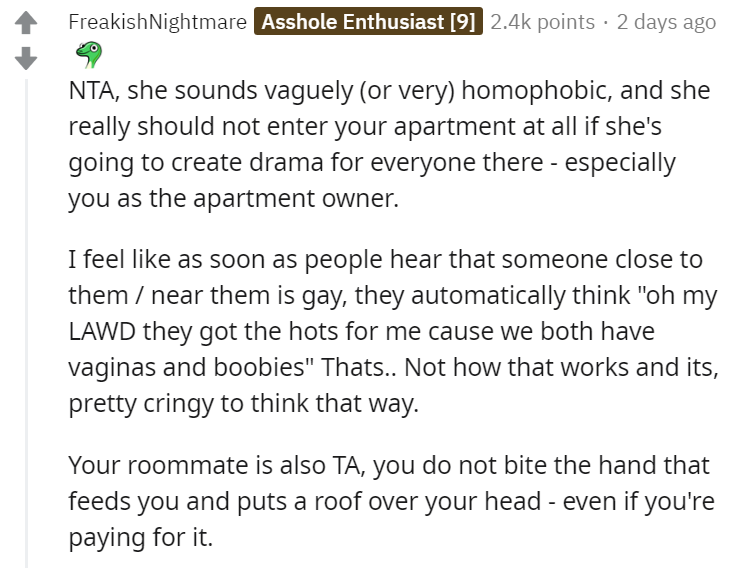 It should be a compliment if it is just harmless. 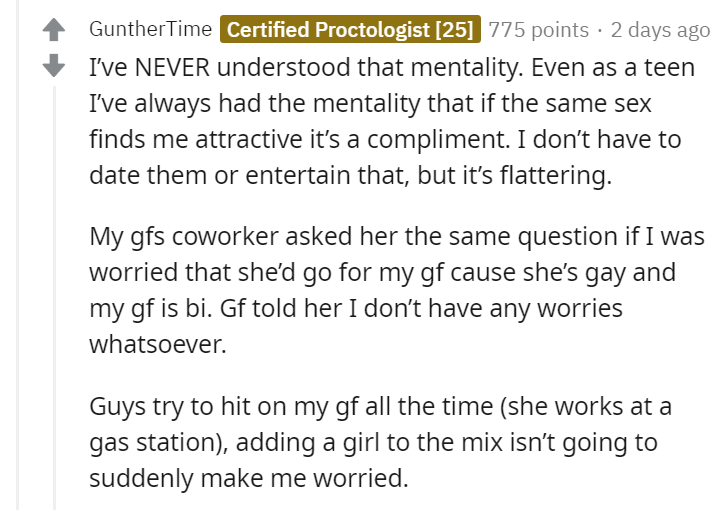 This girl seems to have some serious personal issues going on. The fact it started as a “you live with a girl so you two just be screwing around” and once the ‘bombshell’ of you being gay was dropped, it morphed into “you are into her” should be a gigantic red flag for your roommate.

The Girlfriend seems to have a problem with females around her boyfriend. That reeks of insecurity and confidence issues. You don’t need to be easier on her. Had she told the roommate that she thought you were checking her out, yelling at her in front of your friends would have been overkill however she is now dragging your friends into this. Who knows how many people she perpetuated this false crap to that night before your friend mentioned it to you.

In the end, it boils down to you live there, and she does not. Yes, a roommate is entitled to have guests, but you also have a right to be comfortable in your own home and not be harassed with her BS. –Amraff

There is no ‘friend zone’. 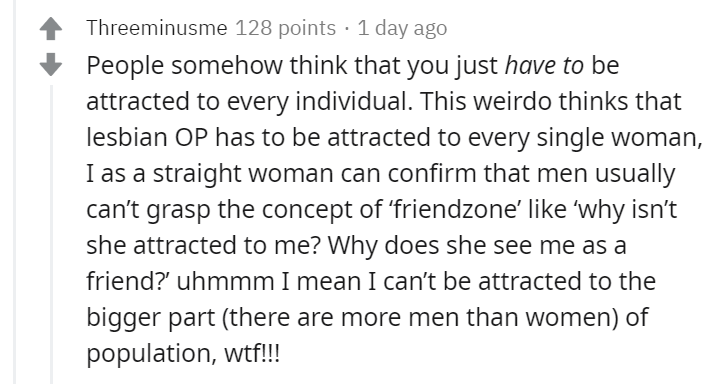 What are your thoughts on this? Comment down below and let us know.