What if frozen was a horror movie?

That is the thought process of this particular art creator. She wants to create art of various pop culture icons but with horrific twists. Not only that, but she also gives all of her art pieces their own unique story to go along with it. And I don’t know about you but I would love to see a show where Tellitibies were deranged monsters as they are quite scary as is.

She has amassed quite the following because of her work as she has a very spooky and beautiful art style that has drawn many people in. Not everyone can find their style but her art is a thing to behold. And I am not at all singing her praises without reason, as you can some of her best artwork by scrolling below. Although a warning is necessary as this might somewhat ruin your childhood.

#1 The Scooby Doo gang breaking out. 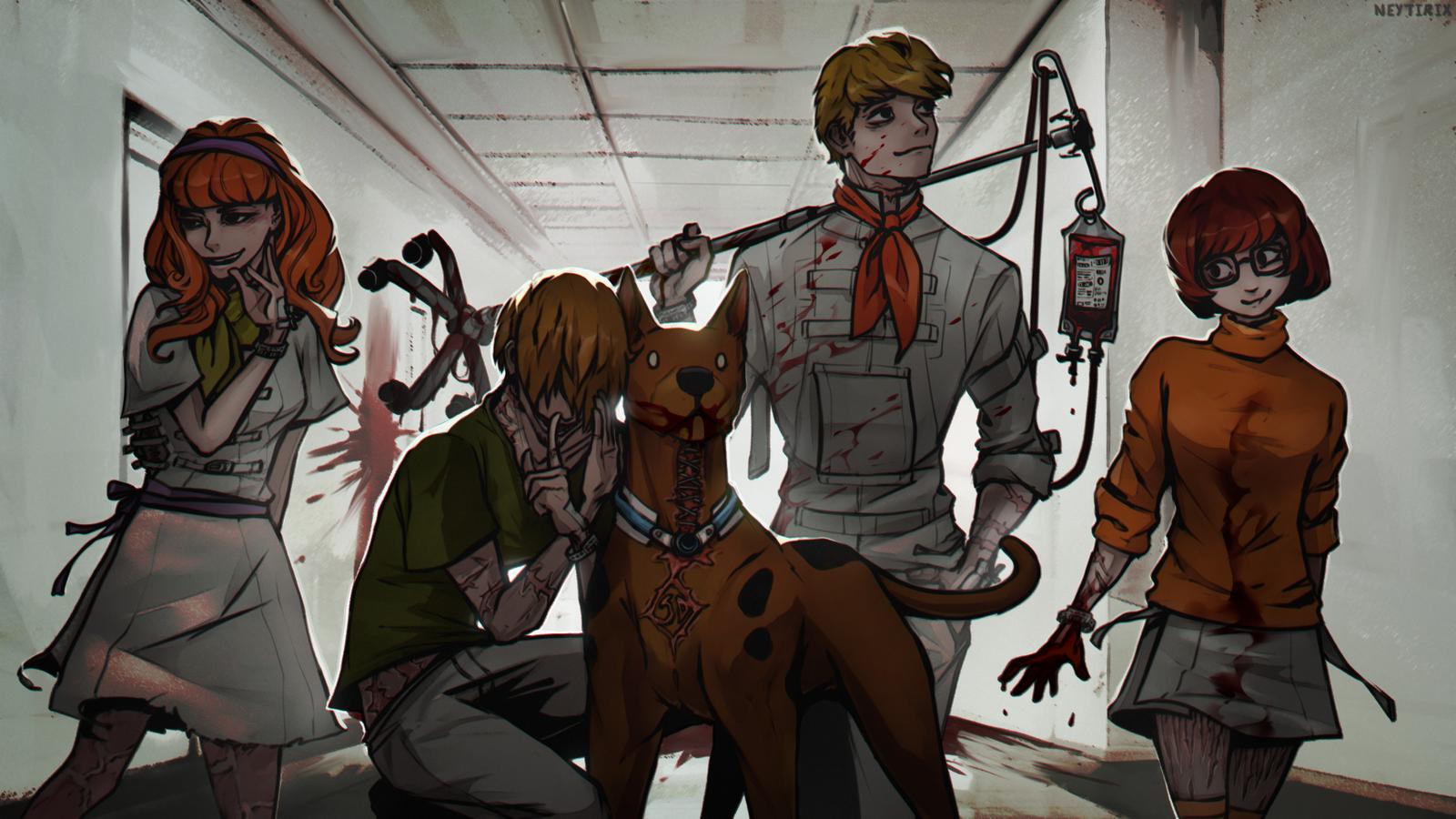 Mystery inc., was made up of a teenage group of friends, who would solve mysteries and battle monsters, always managing to save the day. This was their reality.
They didn’t see the white sterile walls as confining. Their meals, always colorful and easy to swallow and the daily check ups from the nurses and doctors were seen as their friends and family.

The hospital had tried everything to get them to escape this dreamland of theirs. They even let the group keep the Great Dane they had found in the same facility they were rescued from as children.
It was medical mystery that the dog was still alive after having a human voice-box implanted. Instead of rejecting the foreign organ, he was able to use it, which would result in this repeated warbled human cry. Even though unsettling to hear for others, the group would find delight in thinking the dog could understand them.

It was a mistake that day for the nurses to try and remove the dog after seeing no progress in their recovery after all these years. The group had always been relativity docile to them, so they were unprepared when suddenly they themselves had turned into the ‘monsters’.

#2 If normal animals had mutated somehow. 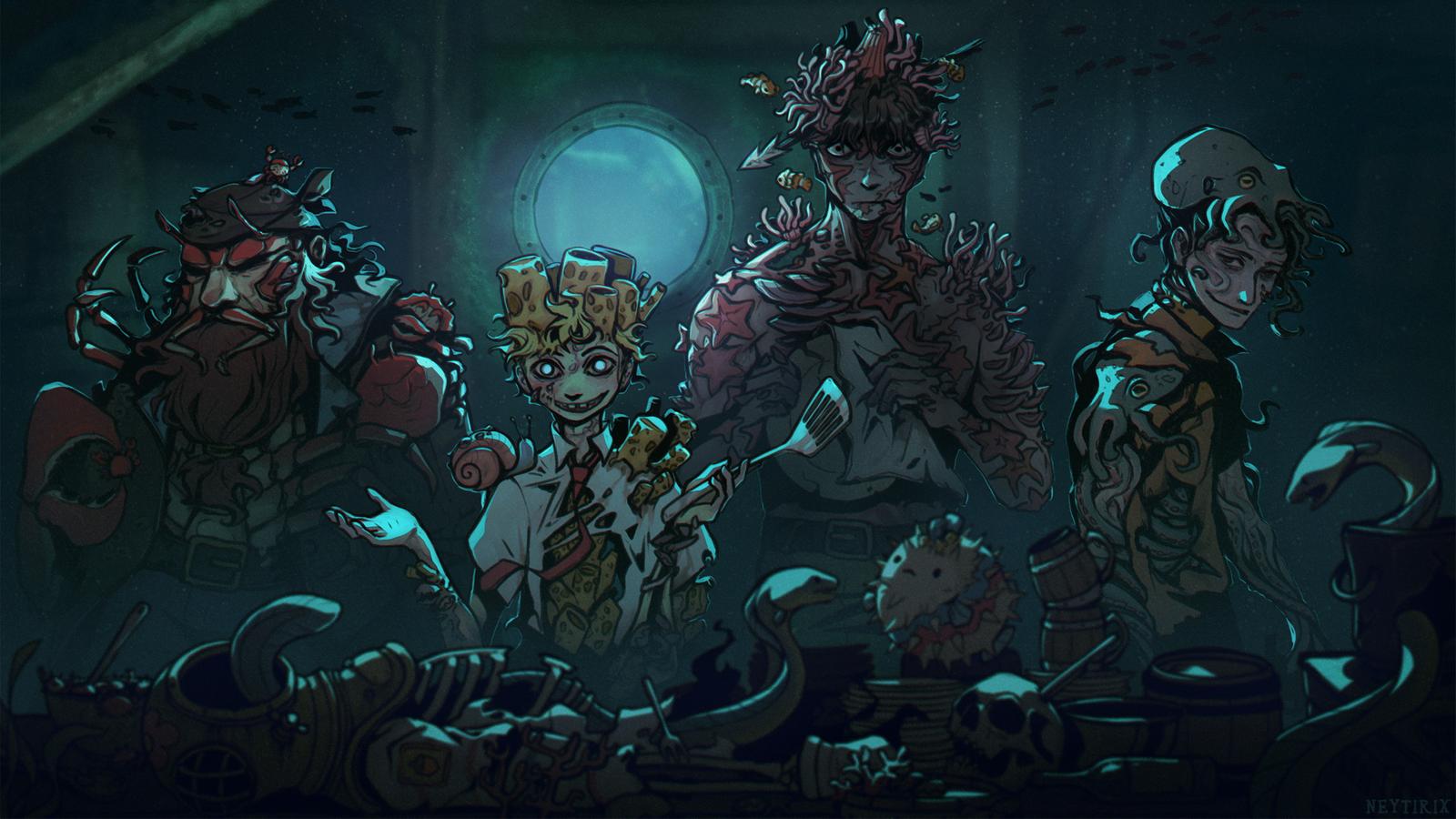 Once, these four were honest men who worked as Kitchen Staff on a humble Trade Ship. However after they came under attack by pirates, they were press-ganged into working for them instead. Confined to the kitchen, they were forced to work indefinitely to appease their new Captain, who was a known glutton. Inevitably, the ship attacked one too many times and was sunk.

Still confined, the four men had no option but to go down with the ship. Now, even in death, they continue to prepare meals at the bottom of Davy Jone’s Locker for whoever, or whatever comes along.

#3 Elsa, the Queen who rules everything. 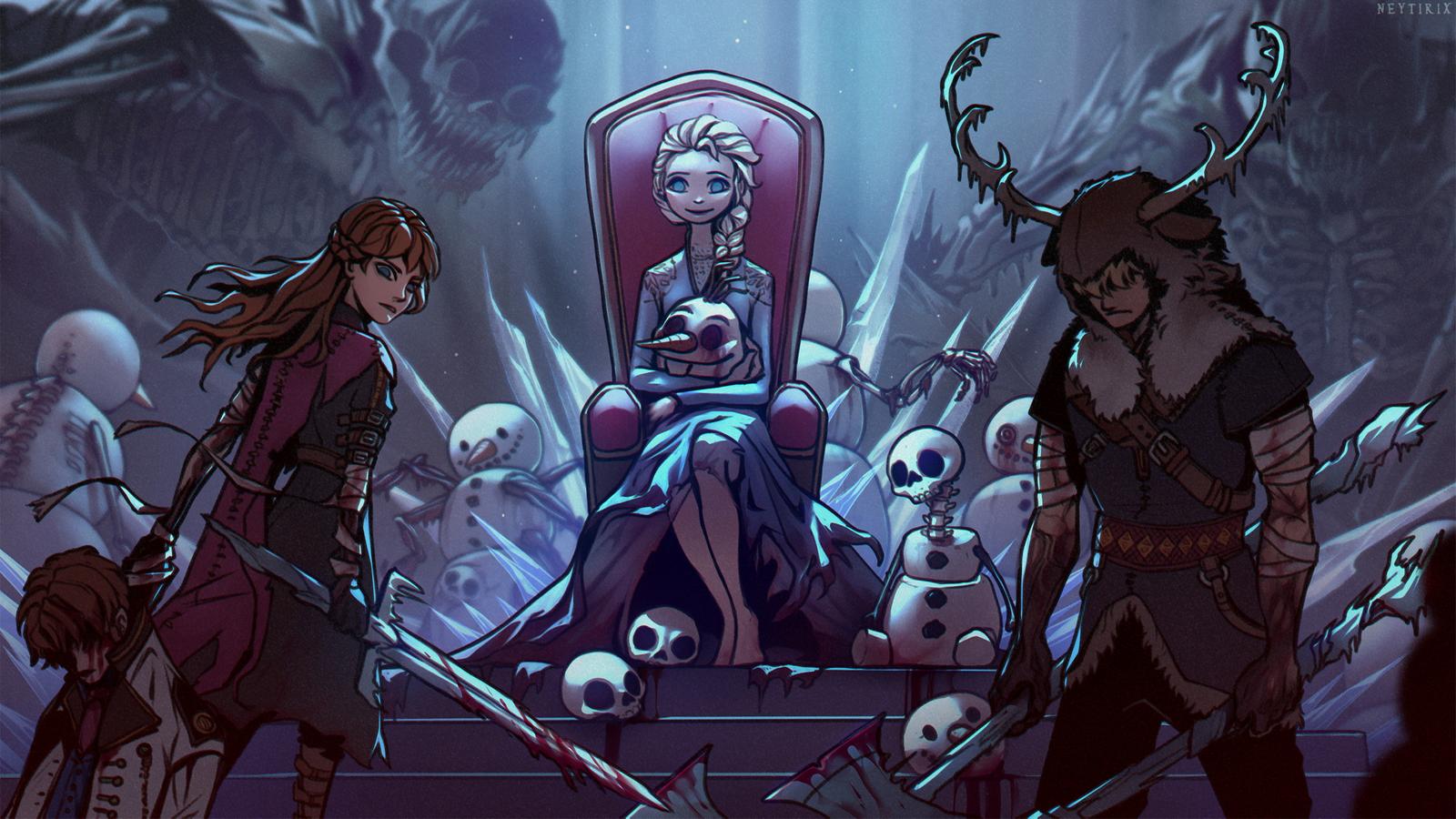 Do you want to build a snowman?

Come on, let’s go and play!

I promise not to break this one

It’ll be so fun

He will never decay away!

This time it wont be so bloody

I won’t waste a drop.

We can give Olaf some new eyes!

Do you want to build a snowman?

He will be a pretty snowman.

Anna was always jealous of Elsa and her powers. But she never meant to break her.

Neytrixx has done a whole series on Youtube recreating some of our favorite shows and movies as horror shows. And it is definitely interesting to see how her mind works and how she comes up with these ideas. Her artwork brings something new to the already overdone genre of re-imagining things which was desperately needed in recent days.

#4 Dora, the collector of faces.

On the Day of the Dead (Dia De Los Muertos), a class of fox demons known as Swipers, will try to steal the skin of the living, usually starting with the face.
Dora when younger, fell prey to this, and now goes on adventures, protected and guided by her corrupt Alebrijes, stealing the faces of her fellow living to not only wear to hide her mutilation and salvage an identity, but also to collect as offerings to the foxes in a futile delusion that she can one day get her real face back.

#5 If the peppa the pig wasn’t for kids and instead was a demented show. 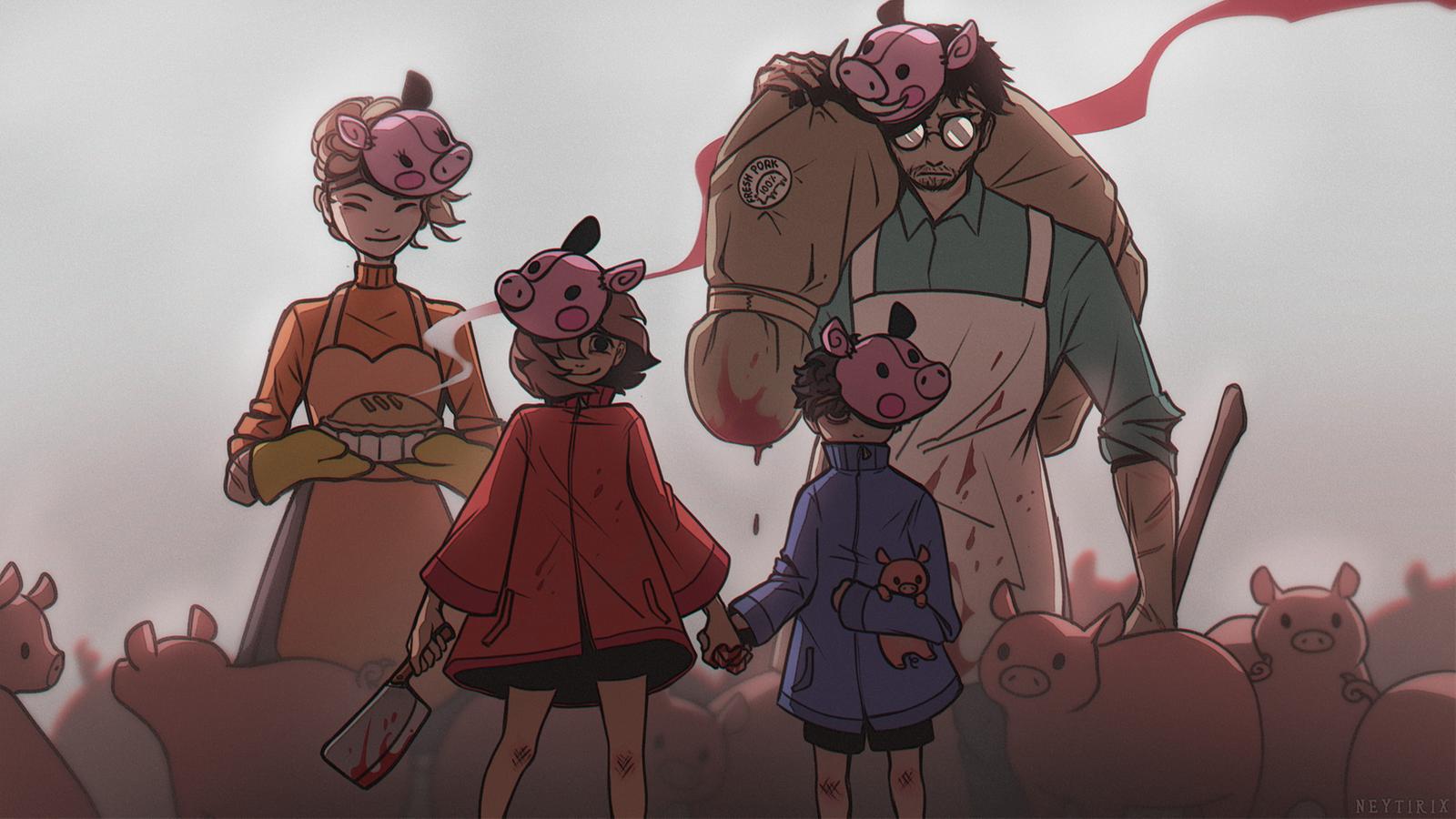 Date, 19.4.87
This is ridiculous. Just because of one little screw up the department ships me off to this godforsaken town in the middle of nowhere. Thought I’d be hard pressed to find a good hot meal let alone a place to sleep. Luckily the local butcher here offered me to stay at their family pig farm. They seem to be doing pretty well too. Suppose it pays off to grow your own produce.

20.4.87
The butcher’s family is a bit odd. Hospitable yes and damn does his missus cook a mean stew, but I don’t know, just can’t shake this feeling I got. Guess it must be the detective in me. Gotta stop wasting energy on useless thoughts and more on these missing people. Headquarters is expecting a report come Monday and hell if I am gonna give them another reason to keep me here.

21.4.87
Met the kids today. The lass is friendly enough but the boy. They say hes a bit simple but I’ve seen him follow his mothers instructions perfectly. Odd. Anyways the investigation is going nowhere. Constant dead ends. Infuriating is an understatement and no one here is opening their damn mouths. I know they know something. Guess this village doesn’t take well to strangers.

26.4.87
Where is the butcher getting all the meat?? Was there a shipment when I was asleep? I’ve counted 24 pigs when I got here and there are still 24. I’ve looked around for a freezer but can’t seem to find one. And its fresh meat. Everyday. Just yesterday the missus prepared a roast and hell if that meat was anything but fresh. Maybe there’s another farm further out. Good news is I’m out. Suppose the department finally realised how pointless this all was. It’s not like its uncommon for a young couple to elope. I wouldn’t blame the poor sods wanting to escape this place. That’s what happened. Case closed.

#6 Telletubies mutated because of the apocalypse.

“The antennas is how they communicate and identify each other. So logically all we had to do is ‘borrow’ some of them and voila! Perfectly hidden~”

“This is disgusting. It stinks too”

“Oi! Don’t talk smack about my headbands. I’m so proud of these I was thinking of opening an etsy store!”

“Huh! As if there is enough civilisation left for that.”

“Anyways..I’m pretty sure its the generators disguising us..not the headbands.”

“They think we’re part of their happy little family”.

What did you think of these illustrations? Would you like to see a show made based on these characters? Comment down below and let us know.