The horizon always has two sides, one where the light outshines and the other where the darkness engulfs the light setting it deep into the ground. The human was also created having two broad yet compact sides of their personality. The brighter side often eclipses the darker side of the human race. The goodness in us is overtaken by the most common misdeeds. We’re often sinning but we simply call it, to have been misled.

The seven deadly sins also known as the cardinal sins in catholic theology, elaborated in the 13th century by St. Thomas Aquinas, stimulates further immoral behavior. These misleading tracks are often glorified, they are claimed to have been a source of compassion in human nature. Talking realistically, we’re just nurturing our inner demons labeling these social stigmas as qualities. They eat away the corresponding virtues of human nature.

An artist, Shawn Coss, perfectly illustrated these wrongdoings in his art and how we mask them. We go on claiming not to be sinful, just to have been off track. It further depicts the true colors of these sins and how they overshadow your true personality. Scroll down to check it out! 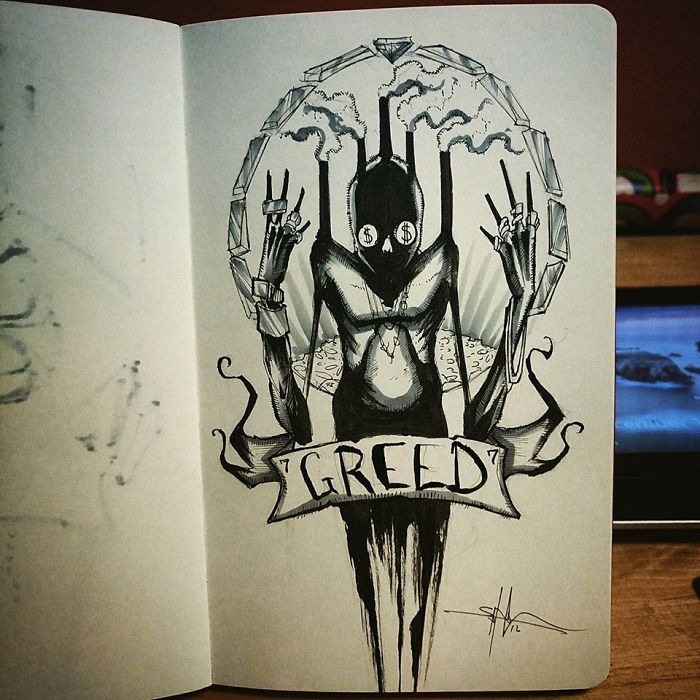 The urge of attaining more.

But having looked deeper into the meaning… What if it’s not just about acclaiming things we desire. What if it’s fulfilling your desires through the wrong means and ways. This greed may lead you to be successful but only if it complies with the permissible boundaries. The illustration perfectly explains how the sight is blinded by monetary benefits, hands bounded by jewels and feet rooted into the luxuries while the burden keeps on building on the back. The sparkles have blinded the thought process, in which it has been forgotten, what if the spinal support collapses, where will the strength of bearing the weight of these luxuries come from? 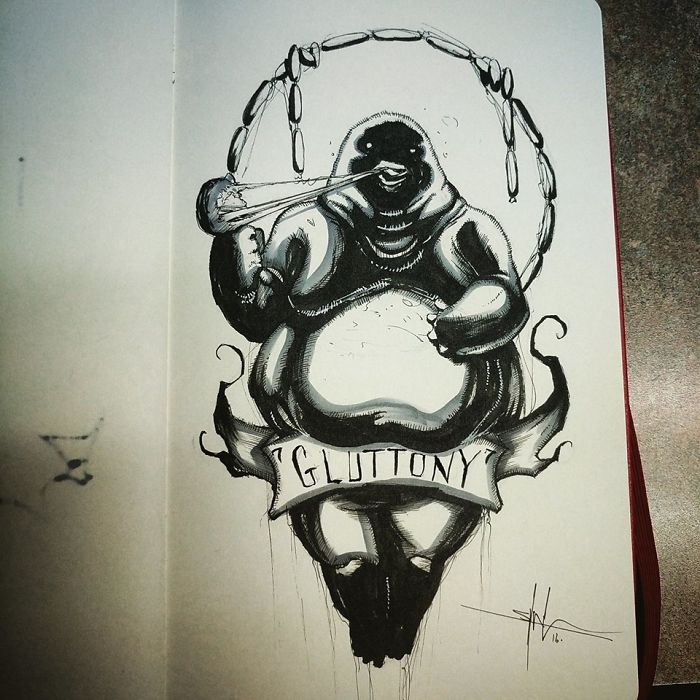 It’s okay it’s just food in excess, right? What if he/she has an elaborated eating pattern, it’s totally fine, I suppose? Until this gluttony takes over all of the aspects of your personality. It kills your characteristic of being satisfied as well as of being content because you’re never really happy. You’re always looking for more and more, what if you run out of resources? Where will you attain everything from? Including food. Will you wish to consume your fellow humanity? Food for thought! 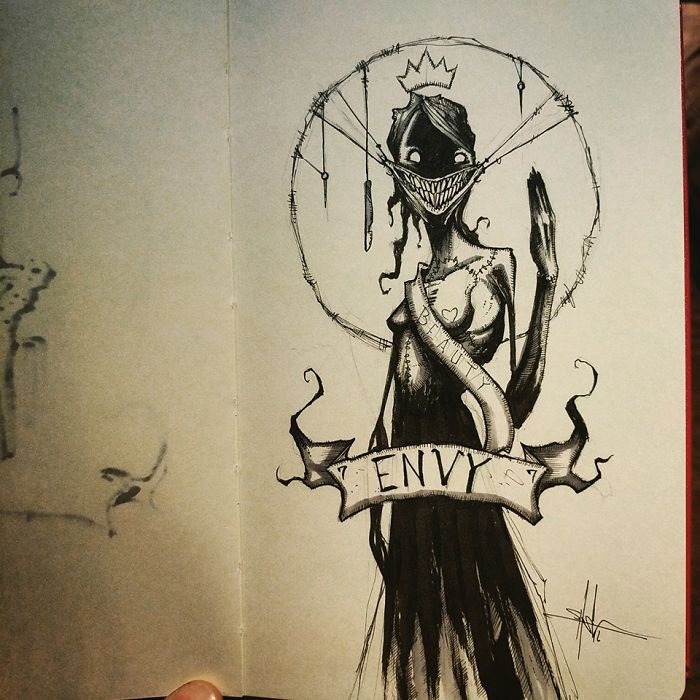 Just a positive way considered of being jealous

A question to self, what’s the real difference between jealousy and envy? A thin line, as society explains it to be. Well, it’s just a social misunderstanding, there’s no real difference. Envy is thought as if it adds resilience to oneself, whereas it adds to discontentment. it doesn’t strengthen you rather it weakens you to the core as you’re not and can never be proud of what you have with envy being a part of your daily drill. It shatters human connection and burns the thread-lings holding us together. 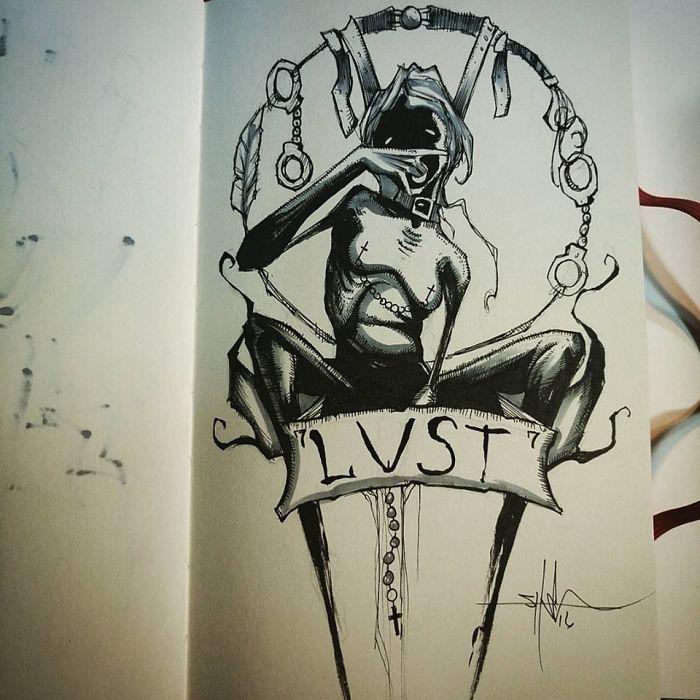 An appetite for the forbidden 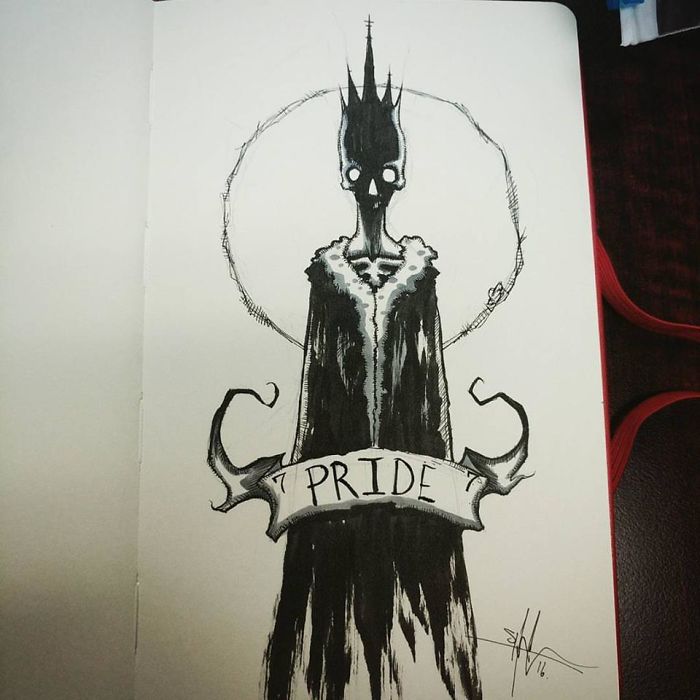 Considered as the deadliest of all sins. It roots the evil within keeping you unknown of the fact, it darkens your inner soul when you’ll be thinking of gleaming. We’ll find debates that pride fuels self-esteem and self-confidence, it boosts you up. If at all pride isn’t a sin, then why does it fuel arrogance and tightness? Pride might have different tones to embrace, let’s say taking pride in a milestone you’ve achieved through your hard work surely booms your self-belief but considering the fellow beings as any less due to the achievement you just unlocked is arrogance. Both these conditions fall true in the case of pride. 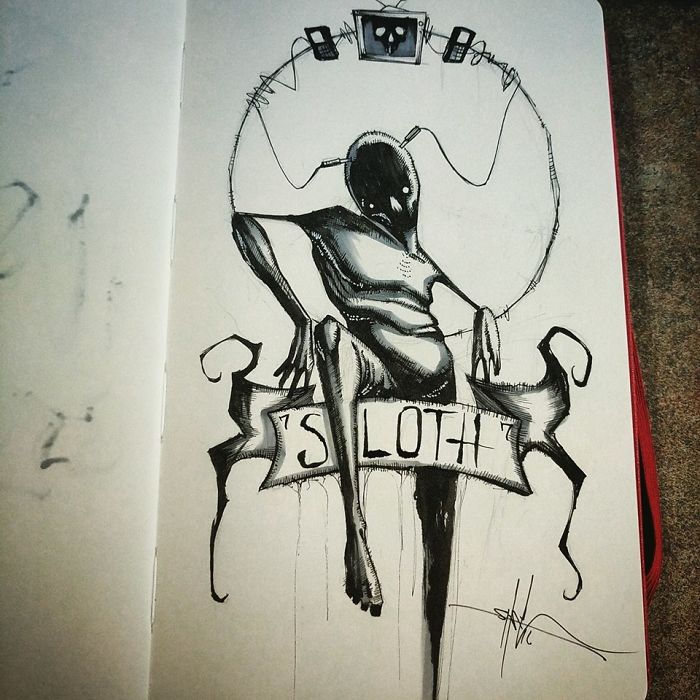 Taking pity over oneself, it’s not mandatory that nothing good comes your way. The other possibility is that you’re not looking for any good at all. You’re too hopeless and slow to even explore the outer world. Ignoring the opportunities coming your way and justifying it by saying you aren’t really capable of it shows your growth is not just slow rather it has been stunted by your own dullness. Worldly goodness, as well as spiritual goodness, requires effort as well as energy. This is criminal negligence to your productivity and growth as a whole. 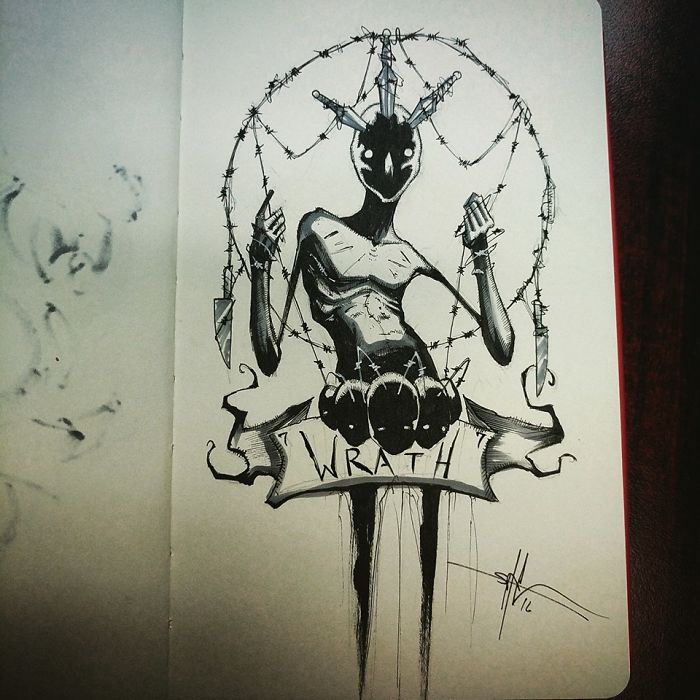 Wrath brings about hate and violence. Not only the target comes under it so does the surroundings. the whole aura of wrath kills the goodness within. This aggression not only harms those in the surroundings but also damages the man himself. It blocks your directions, kills your thought process, and makes you lose focus. the episode might be of a few minutes but leaves behind non-recoverable cracks.

The illustrations perfectly explain how we hide these sins/wrongdoings behind simple smiles claiming them to be an essential part of reflexives as well as emotion. The darkness these sins silently stir up within you is very obvious. Some people refer to disengagement from God when it comes to having such immoral behavior.  These behaviors shape your soul and outer personality. Hereby, being watchful of the darkness inside you would save you and the fellow being from being permanently damaged can you relate to any of the above mentioned? have you been struggling? what are your thoughts let us know in the comments below!