Mental Illness is not an excuse.

Don’t get me wrong, people deal with various problems every day and sometimes it can be hard to even wanna get up and brush your teeth let alone change your clothes. However, you can’t use it as an excuse or make yourself look like a victim. These may seem like harsh words but people with mental illnesses are fighting against these stereotypes every day and they work hard on that. So to come in and say ‘I didn’t have the energy to call you beforehand’ is just insulting.

We have all had one of those days when you don’t have the energy to get to work and want to lay in your bed all day. And sometimes you have to force yourself while others time, you have to be kind towards yourself and let it go. However, that doesn’t mean you don’t notify your manager beforehand. Many higher-ups understand the need to take care of your mental health these days so they will be fine with the day off as long as you notify them.

But this person didn’t do that. You can read the whole story by scrolling below.

We start off with Peggy who just got promoted to Manager which is always a good thing. 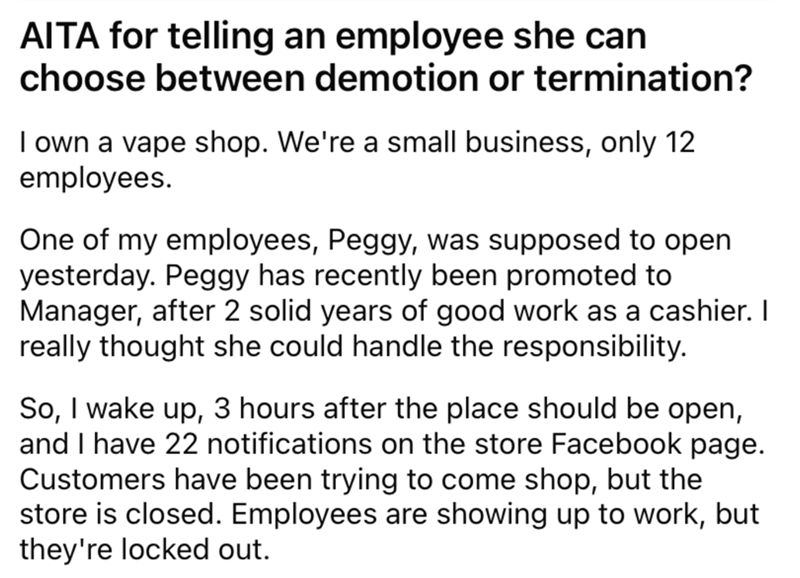 However, she clearly wasn’t ready for it as she took a day off without notifying anyone in the morning. 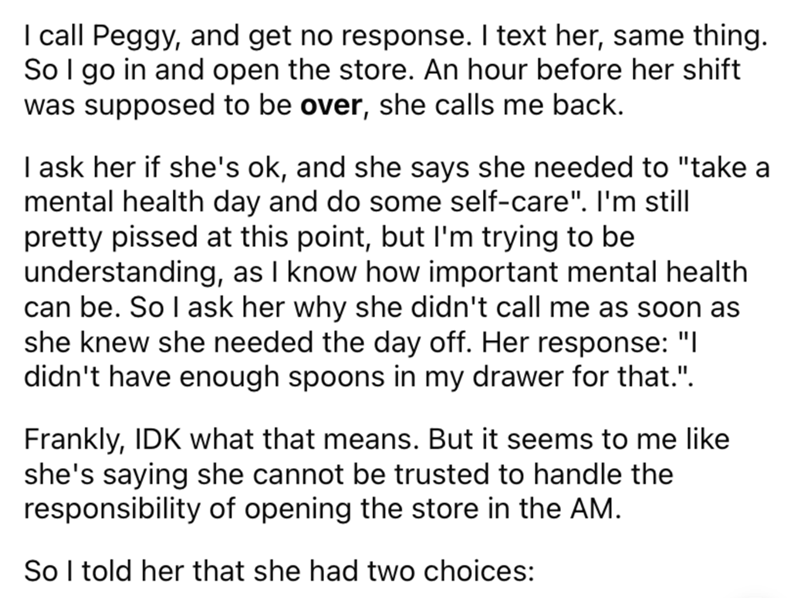 So as you can imagine, her boss was less than happy and gave her an ultimatum. 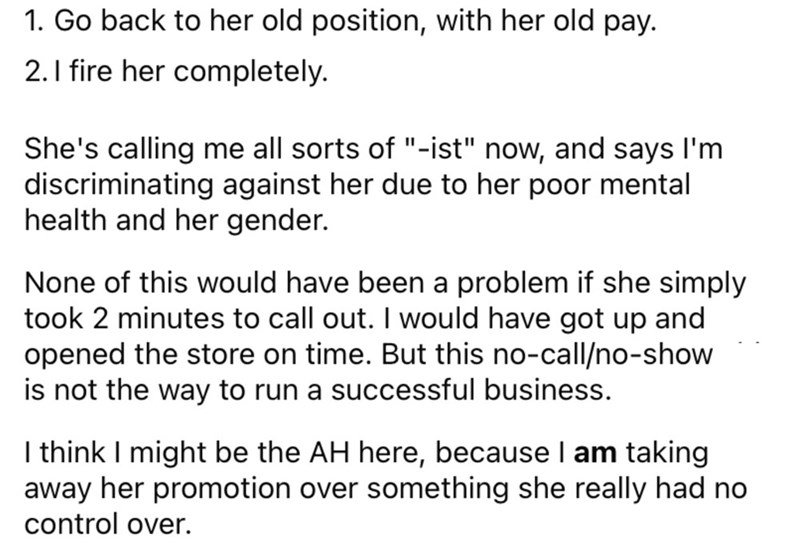 But they aren’t sure whether they did the right thing or not and want other people’s opinions. 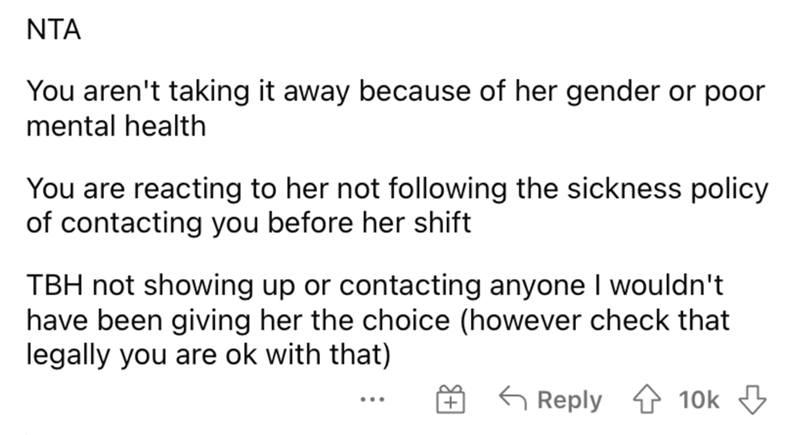 Many shared their own nuggets of wisdom.

Honestly, if it were up to me, I would tell her this is her last warning but I wouldn’t demote her. And if she did anything like this again then I would simply fire her without demoting her. But then again, it isn’t my business and we don’t know about her past and how she reacted to her boss. So at the end of the day, it falls on them to either fire her or keep her.

And almost everyone was on the bosses side.

I know it is hard to even wanna talk when you are down in the dumps. 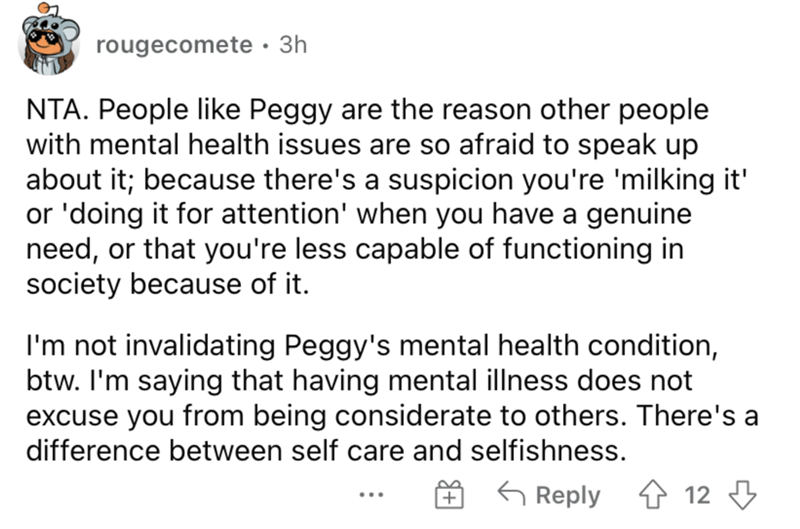 But that doesn’t mean you can neglect your job.

She should have just called her boss in the morning so they could open the shop. 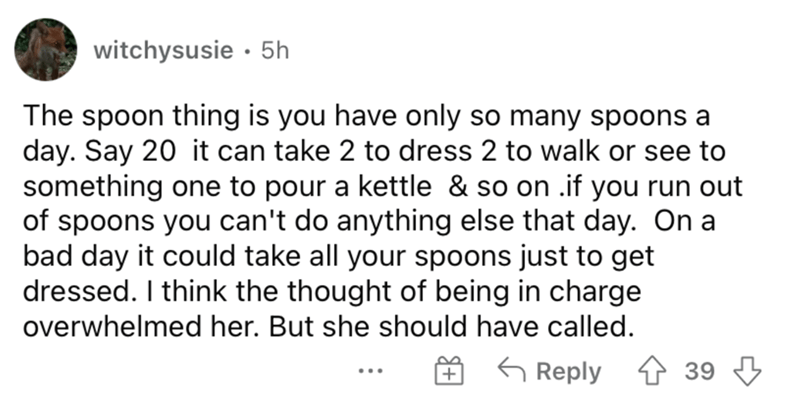 If she had done that, this matter would never have escalated further.

Now, she wants to bury it under blackmail.

It is her own fault but she doesn’t want to admit it.

Some people even suggested straight-up firing her.

Even if she couldn’t call, a text message would have sufficed as well. 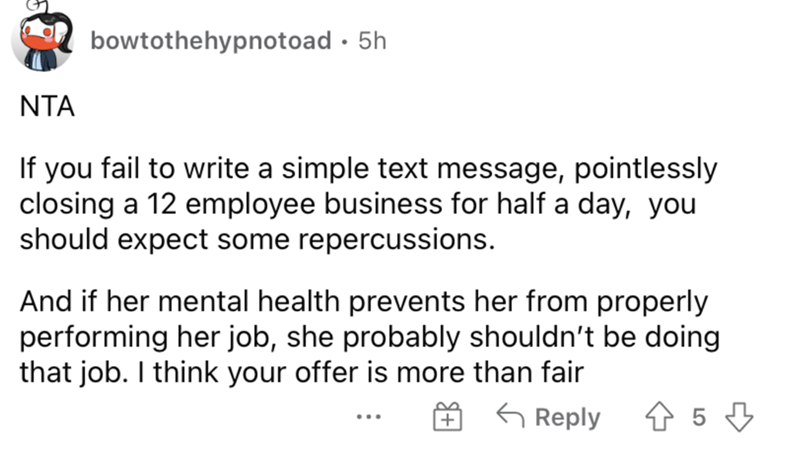 She wants to stay as the manager. 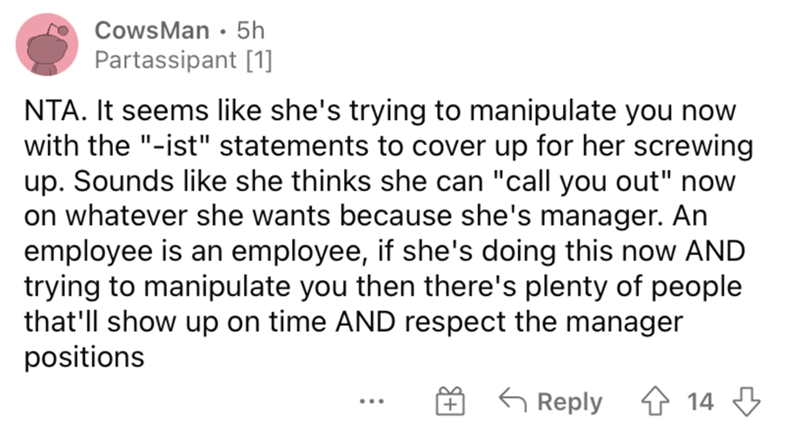 But she should have been more careful if she didn’t wanna face the repercussions o her behaviour. 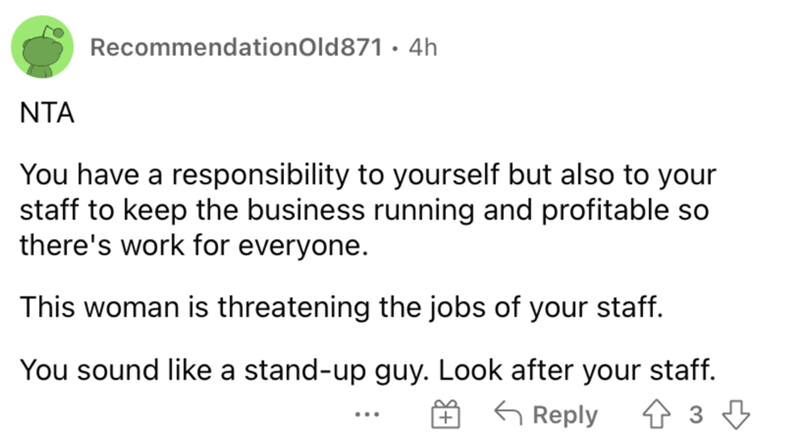 What would you do if your employee did this? Would you fire them or give them another chance? Comment down below and let us know.