Dogs are among the most popular household pets around. they’re loyal, they’re easily trained, they’re energetic, and most importantly, they can serve a good purpose for security. While professionally trained personal protection dogs are super expensive, we’re talking easily 25,000 USD, an average dog can protect you significantly well, especially if they’re big, powerful creatures. After all, simply giving off an aura of protection is often enough.

For example, take a look at any of the following pictures and tell me whether you’d risk anything distasteful with these guard dogs standing around. It doesn’t matter if they were trained for something or not, the mere sight of them is capable of making you think twice. With how these dogs stand guard loyally while their owners withdraw money from an ATM, you can bet anything you’d like that a thief is going to probably not take any chances. Dogs can maul you to death, after all.

There’s a reason why dogs are good for protection, according to Petfinder.

Where would we be without the dogs that work day and night protecting us so that we can enjoy a safer world? As you read this, there are dogs sniffing baggage at the airport, sniffing for smuggled drugs and explosives at our borders, tracking down dangerous criminals, and fighting alongside soldiers in wars. Whenever human capacity and technology reach their limits to protect us, the faithful dog steps in, with sniffing nose and pricked ears, to take on the job. 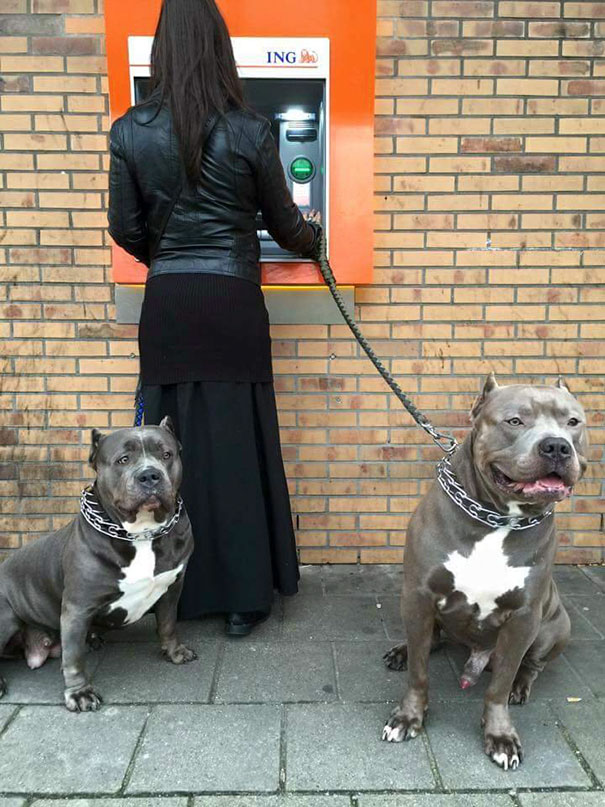 Dogs have protected us since ancient times, and the relationship is only getting stronger. Perhaps we’ve begun to realize, there really is no substitute for the protection of the loyal and talented canine. No matter how amazing and sensitive our technology has become for detecting harmful substances, a specially trained dog, with his incredible sense of smell, may be faster, cheaper and more accurate. (And, we might add, more enjoyable to work with than a scanner.)

No matter how great our military strategies, defenses and equipment, nothing can replace a dog for alerting soldiers to danger and boosting morale. Dogs have served as sentries, scout or patrol dogs, guards, even messengers in wars. In World War II, over 10,000 dogs were trained. Their incredible senses of hearing and smell saved many units from surprise ambushes, as it is difficult to sneak up on duty-bound guard dogs. Messenger dogs carried information in silence, trained to take cover as they traveled from one handler to the next.

What about you? Would you get a scary-looking dog to watch over you while you withdrew? Tell us down in the comments!