Fans are always on the look to find details in movies that normal viewers miss.

Easter eggs are something we all get excited about when they are found and trust me, they are not easy to find. Every time someone finds an easter egg in a movie, I always think how on Earth did they do it because I myself have seen that film 10 times. Easter eggs, for anyone who doesn’t know, are tiny details hidden in the movie by the movie makers. It’s not a detail for everyone to notice and only the die-hard fans manage to locate those easter eggs. Multiple eggs are hidden throughout the entirety of the film and the directors actually want you to find them. Once an easter egg is found, the fan posts it online and acknowledgment of it being a right catch often comes straight from the movie makers.

Easter eggs are fun and they really go surprised and excite you. Today, thanks to the fans, we won’t be trying to find easter eggs but we will be enjoying the ones already found. And these are the easter eggs incorporated into our favorite, drum roll please, Disney movies. Yes, it is time to go back in time and see what we missed. You are bound to get excited after knowing about these Easter Eggs hiding in plain sight.

Scroll down below to enjoy these Disney movie Easter eggs!

1. Lilo and Stitch: There is a scene where you can see a postcard in the background that shows Disney World in Orlando, Florida. 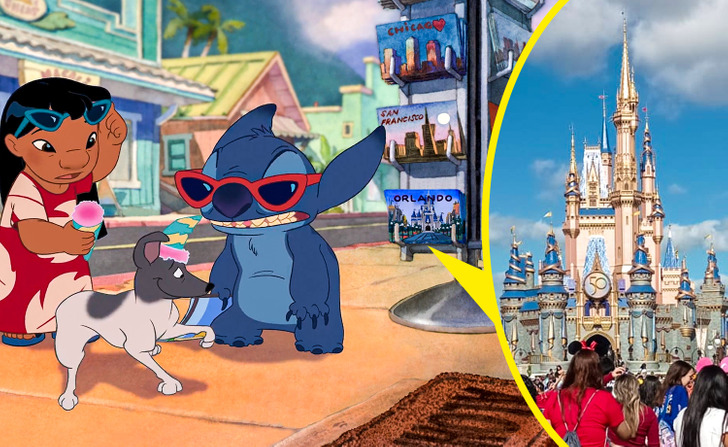 2. Encanto: The beautiful multicolored waster we see in the movie is actually inspired by reality. There is a river in Columbia known as the Caño Cristales River that is multicolored and hence known as the Liquid Rainbow river. 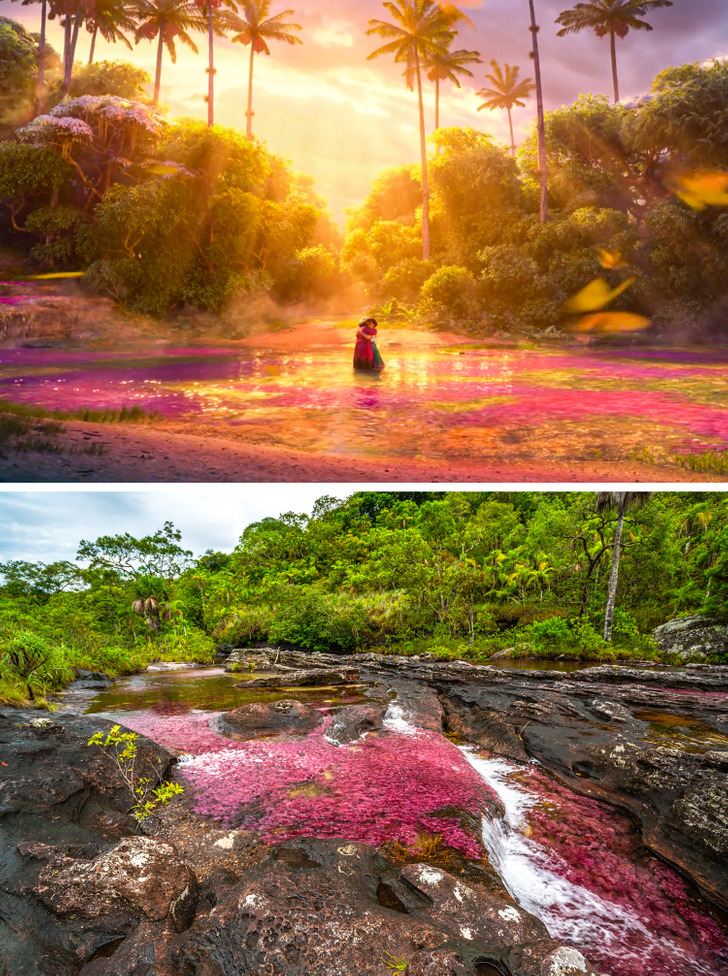 3. Mulan: The reason why we see Mulan touch her hair so much in the movie is that her voice actress Ming-Na Wen used to do that while recording the audio. The sound team shared this factor with the directors and they decided to give Mulan the same habit. 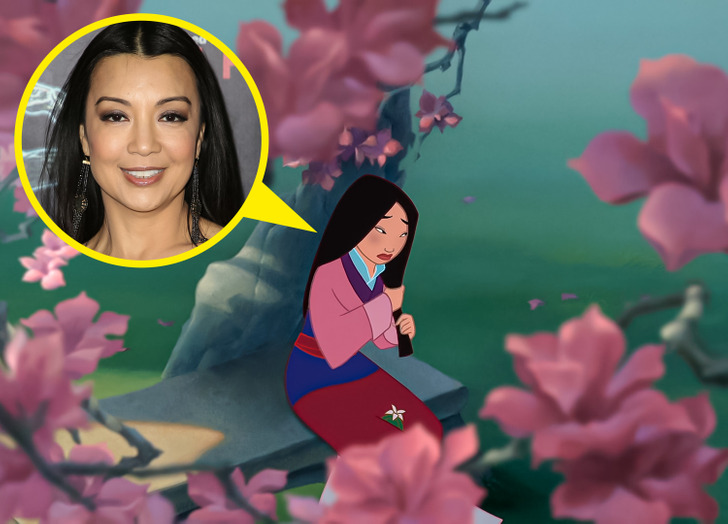 4. Coco: Dante, who is Miguel’s dog in the movie, was actually named after his idol Ernesto de la Cruz’s horse, from one of his films. 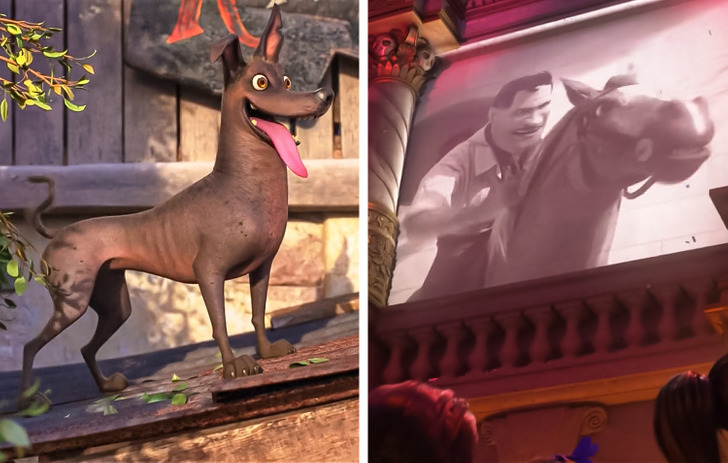 5. Soul: The statue we see in the Hall of Memories is the same one placed in Disneyland, California. 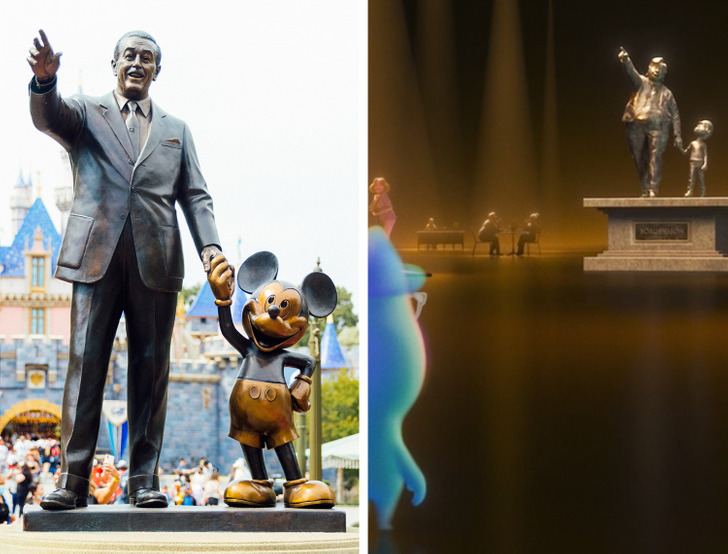 6. Encanto: In the scene where Abuela requests for some music to be played, the tune Agustín chose to play on the piano was the famous En Barranquilla Me Quedo by Joe Arroyo. 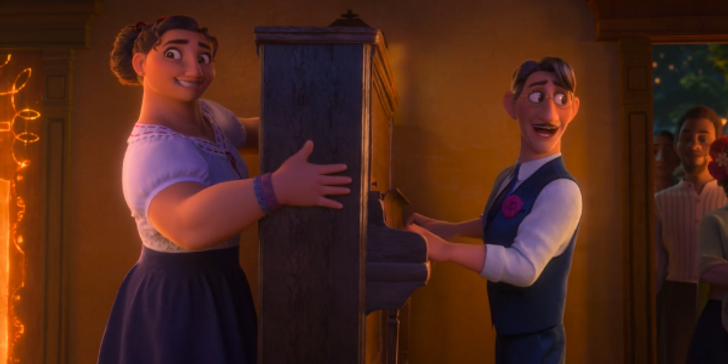 7. Ratatouille: Colette, in this scene, can be seen riding a bike of the brand “Calahan”. This is actually a node to the film’s director of photography, Sharon Calahan.

8. The Little Mermaid: If you look closely, in this scene you can spot Goofy and Mickey Mouse. 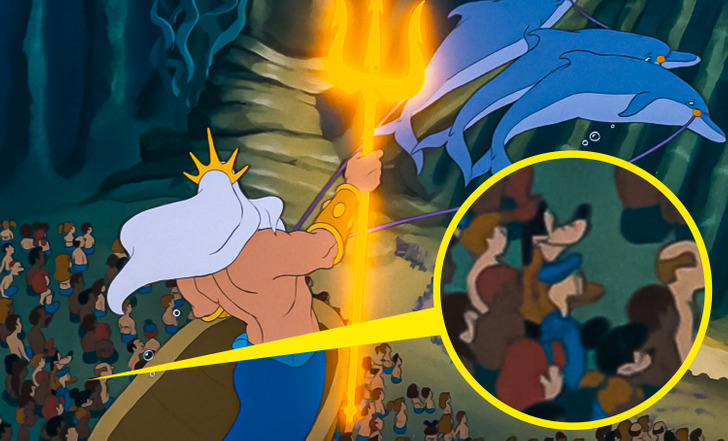 Via The Little Mermaid / Walt Disney Pictures and co-producers

Okay, I am so surprised. Like, I am so going to watch these movies all over again. These easter eggs are so fun and I really have no idea how the fans who found them, managed to find them. Anyways, thanks to whoever dug out these easter eggs because these made our day. I hope you guys are enjoying this one.

Scroll down below for some more fun easter eggs hidden in Disney movies.

9. The Incredibles: In the movie, there is an animated appearance made by two of the world’s best animators who had worked on Snow White and the Seven Dwarfs, Frank Thomas and Ollie Johnston. 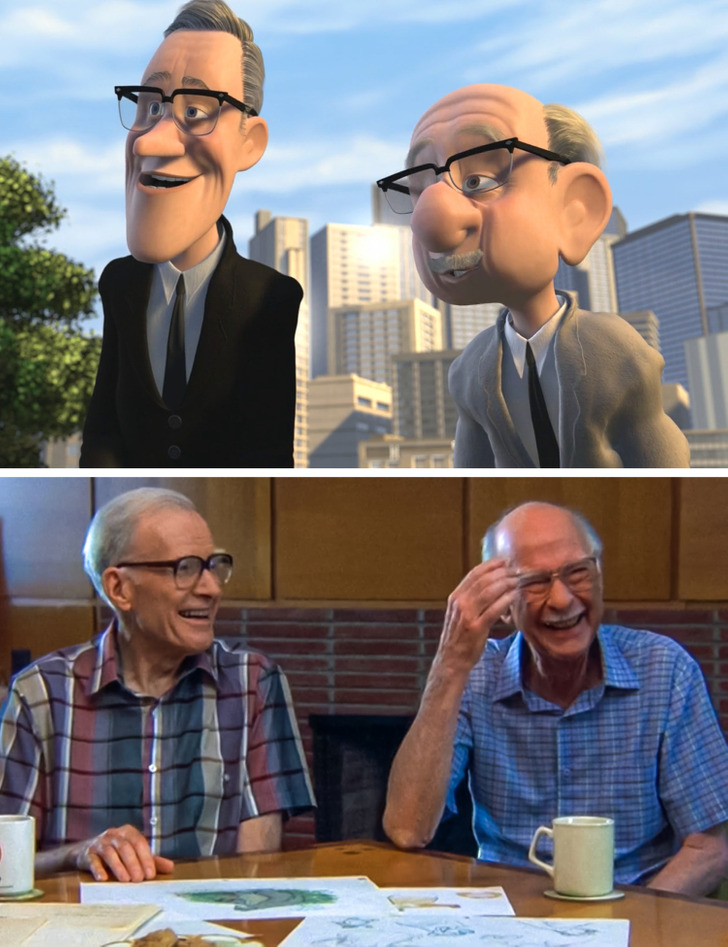 10. The Emperor’s New Groove: Chicha who we saw get pregnant in the movie was actually the first time Disney introduced a pregnant animated character in their movies. 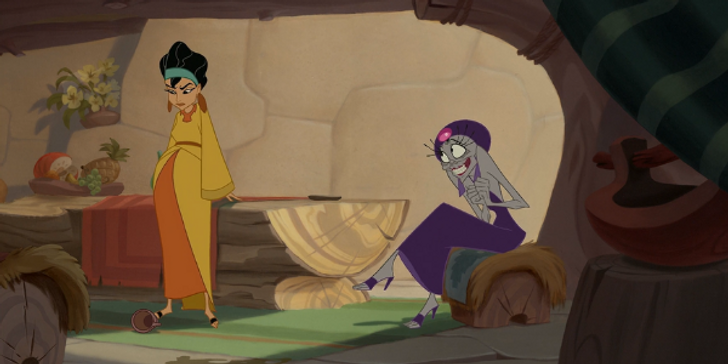 11. Pinocchio: This is the only scene in the whole movie in which Figaro’s sandbox can be seen. It is not visible in any of the other shots. 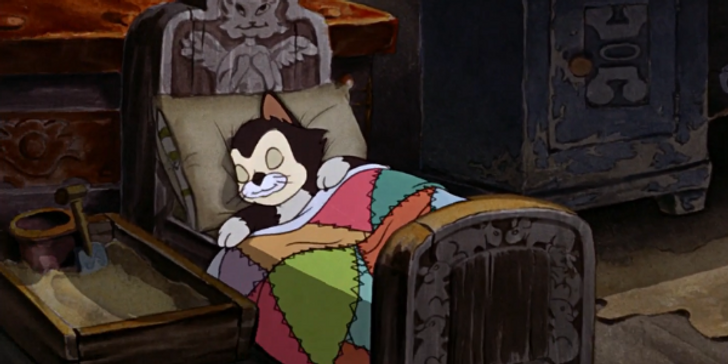 12. Luca: In this scene, if you look very closely, you will spot a Toy Story ball. They are all connected. 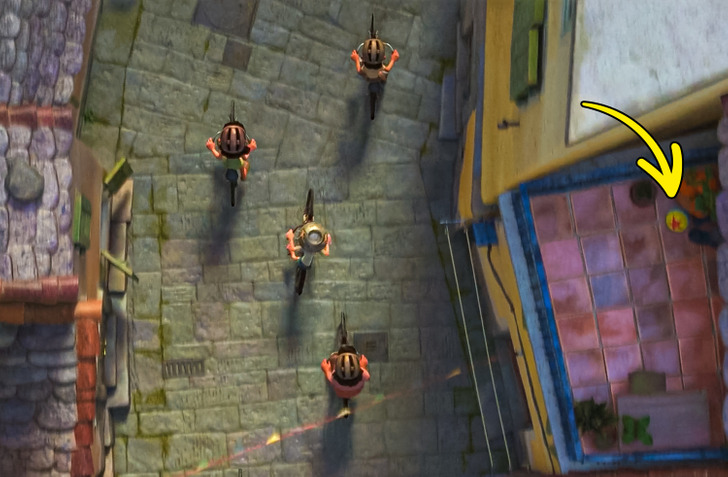 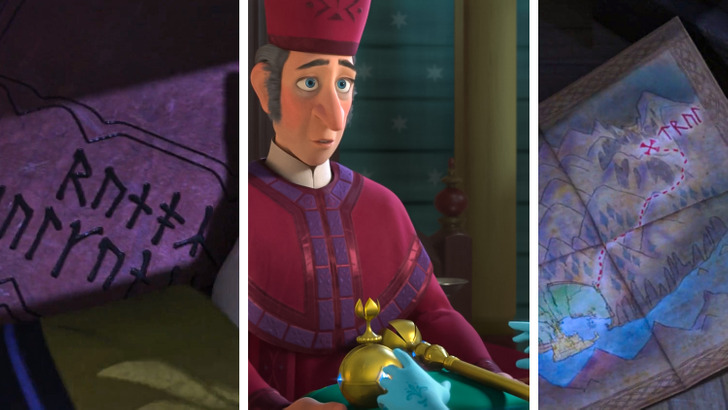 14. Encanto: During the song We Don’t Talk About Bruno, the colorful umbrellas everyone is seen holding make up the flag of Columbia. 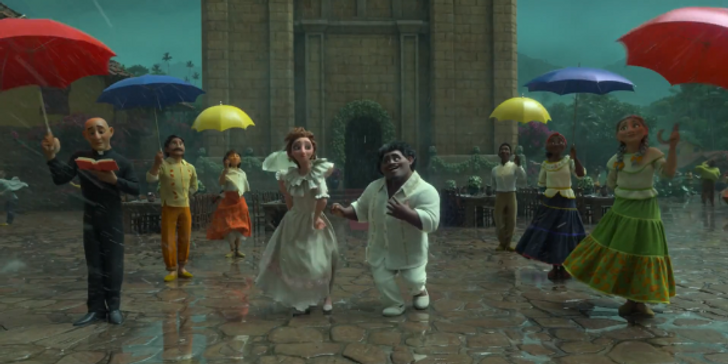 15. Inside Out: In this scene where we see this massive card house in Riley’s Imagination World, the cards if you look closely are not normal. The faces on the cards are that of her family members and the letter R stands for Riley. 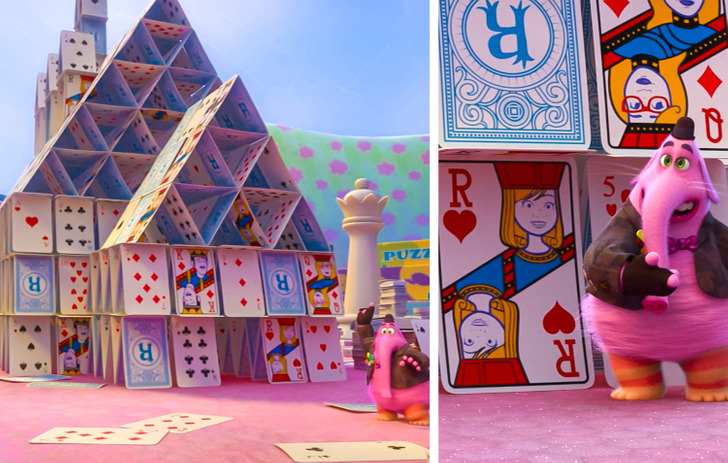 Via Inside Out / Pixar Animation Studios and co-producers

16. Big Hero 6: During this scene when Baymax and Hiro are at the police station, on the desk of the sergeant you can notice 2 pictures framed. One is of Bolt, the dog from the movie Bolt, and the other is of Ester, the animal control officer from the same movie. 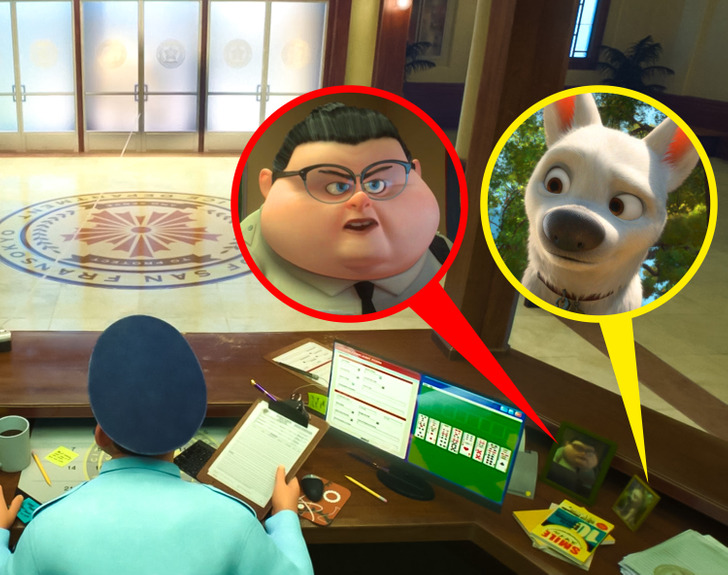 I really hope you guys enjoyed these easter eggs. Don’t forget to share your thoughts in the comments section down below.