You can not blackmail your employees into becoming loyal to the company.

Loyalty is something that is earned by the company. If you give your employees something that they would appreciate, they will want to pay you back. Companies that take care of the needs of their employees become very successful in the long term. The employees know that their company has gone out of their way to accommodate them, so in difficult times, they pull up their socks and make sacrifices for the company. However, this kind of behaviour from an employee can only be won over by a company if they make the same kind of sacrifices. Rewarding your employees when they work hard, giving them time off so you do not overwork them, and providing them with a good working environment all add up to how you win company loyalty from your employees. Nobody wants to overwork themselves for a company that does not even appreciate them. It is common sense. If you work for someone and they never even acknowledge your efforts or pay you back for the sacrifices you make, you will make sure to just provide them with the bare minimum so you can keep your job until you find a better one. Keeping a job just because you want to pay your bills and not because you enjoy working there is something most employees feel. It says a lot about the environment that we work in.

Happy employees are productive employees. If you keep your employees happy, they will want to work better and more efficiently. If they are not happy with the company, they will slack off and do half-hearted work that just makes ends meet. Understanding your employees is very important.

This Redditor worked in a company that overworked its employees. When they found themselves a better job, they told their company that they were going to quit. However, the company would not take no for an answer and told them that it was against the policy to quit on a Friday. The employee had had enough, so they decided to maliciously comply with the company’s demands.

The employee was not satisfied with the company, so they landed themselves a better job. It paid more, had a better work environment, and the office was near as well. So they gave their company a 2 weeks notice that they will be quitting on a Friday. 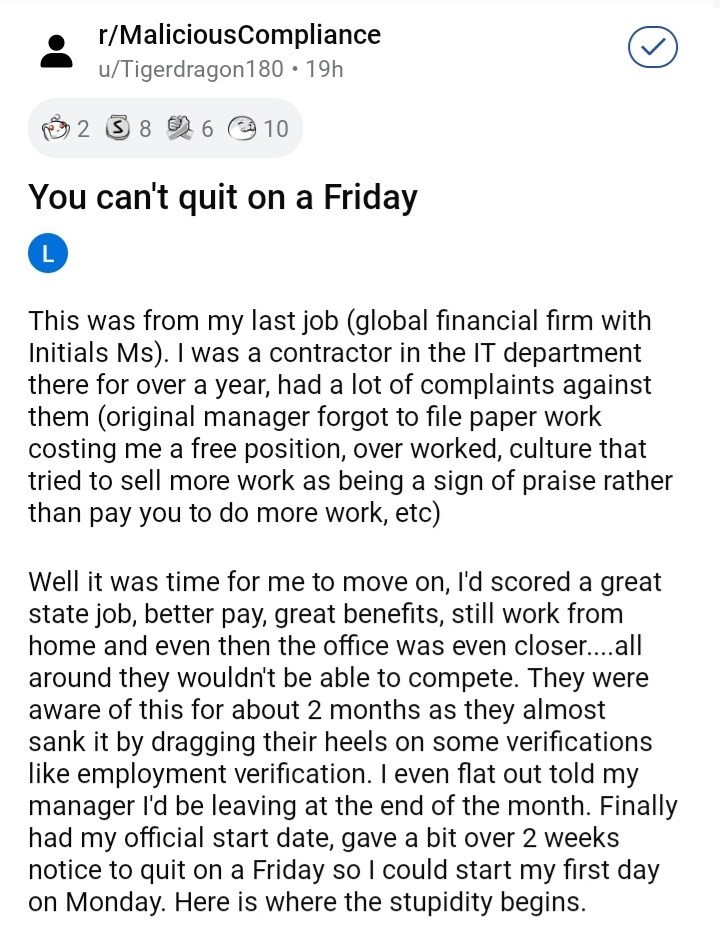 The company used to have extra work to do on Monday, so they would make an employee’s life a living hell if they tried to take off on a Monday. They used to blackmail people into staying with the company. When the employee announced their resignation, that is exactly what the company did, and came down to saying it was against the policy to quit on a Friday. 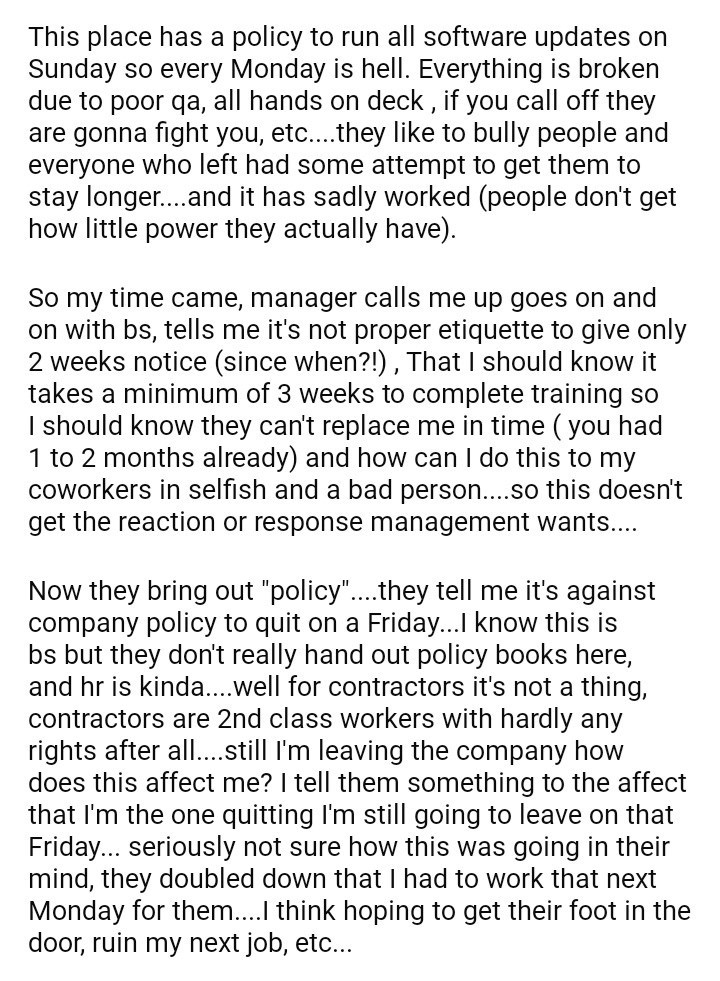 So the company asked the employee to sign out and not sign back in until they changed their mind about coming in on a Monday. It would cost the employee some money, but they didn’t care. They stayed signed out, which cost the company even more. 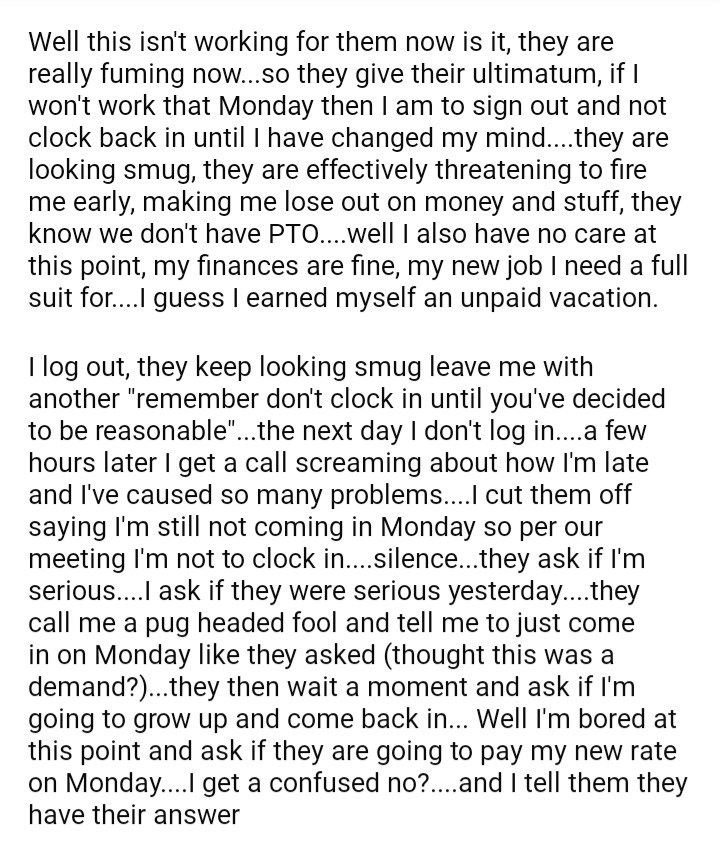 The company tried everything it could to make the employee stay. It apologised and insulted them, and it also used to “company loyalty” card but nothing worked. The employee had made their decision. 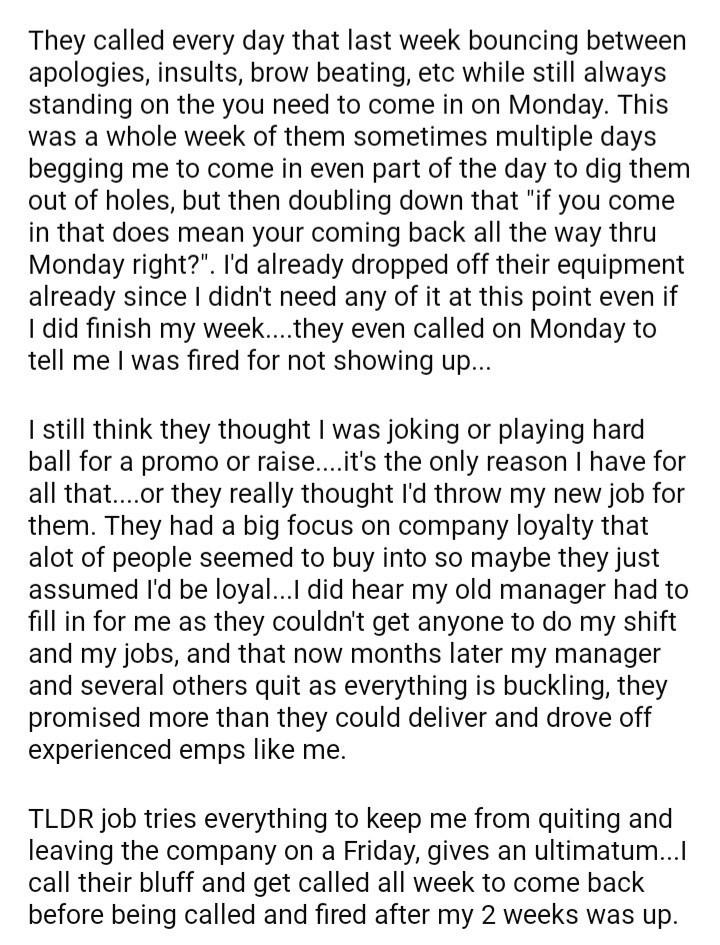 In my opinion, the company was just trying to be over smart and played themselves here. If they knew the employee was going to quit for more than a month, then they could have prepared themselves for the situation but chose not to. They dug their own graves. 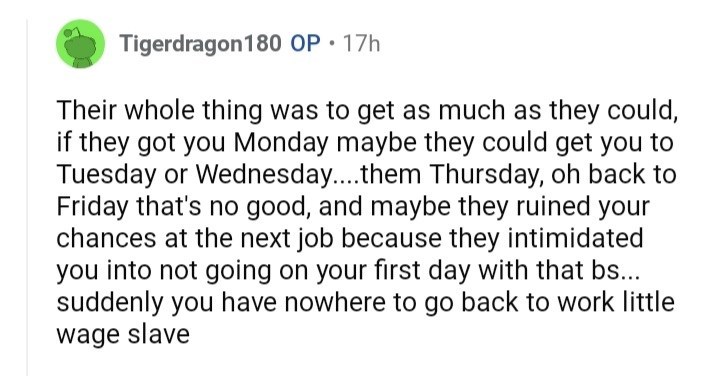 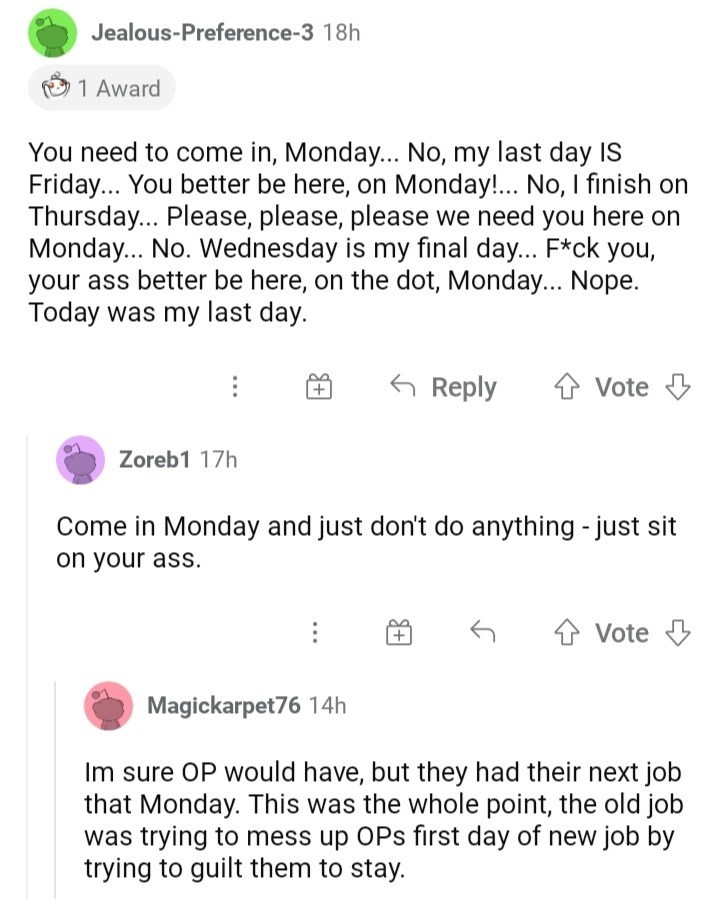 What’s the worst they can do? Fire you?

They could have just changed the day to Thursday. 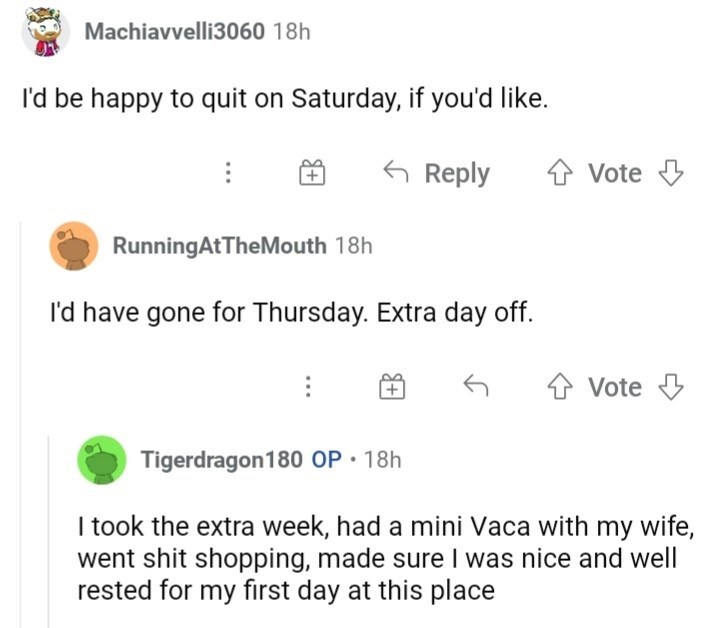 The company seems to use no logic. 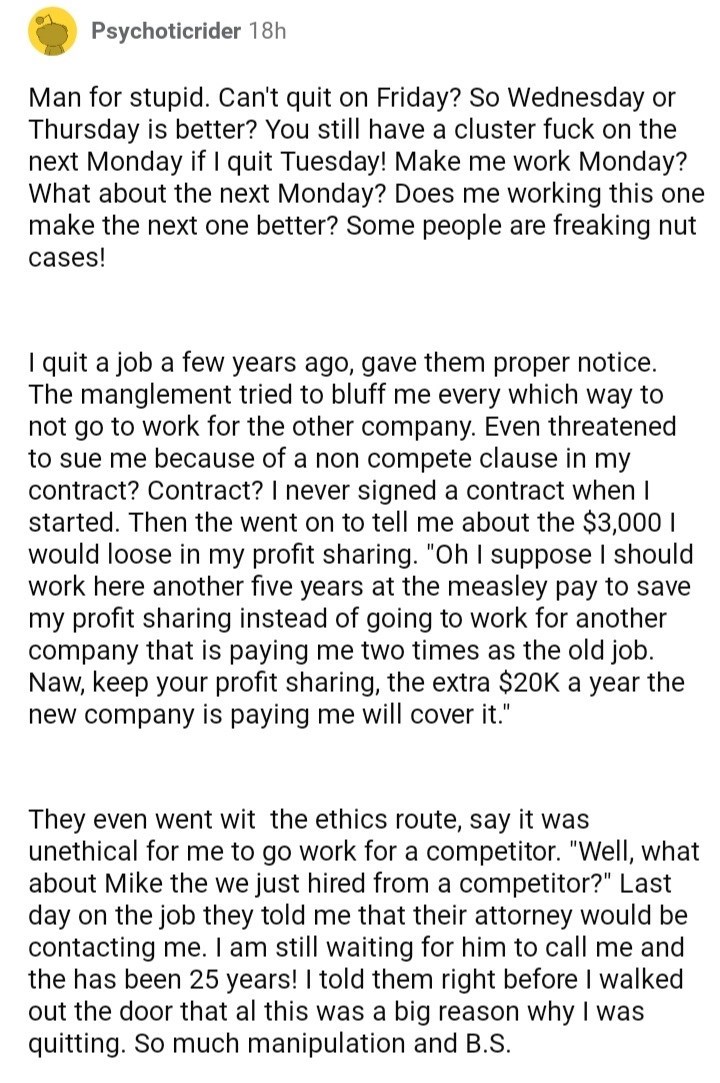 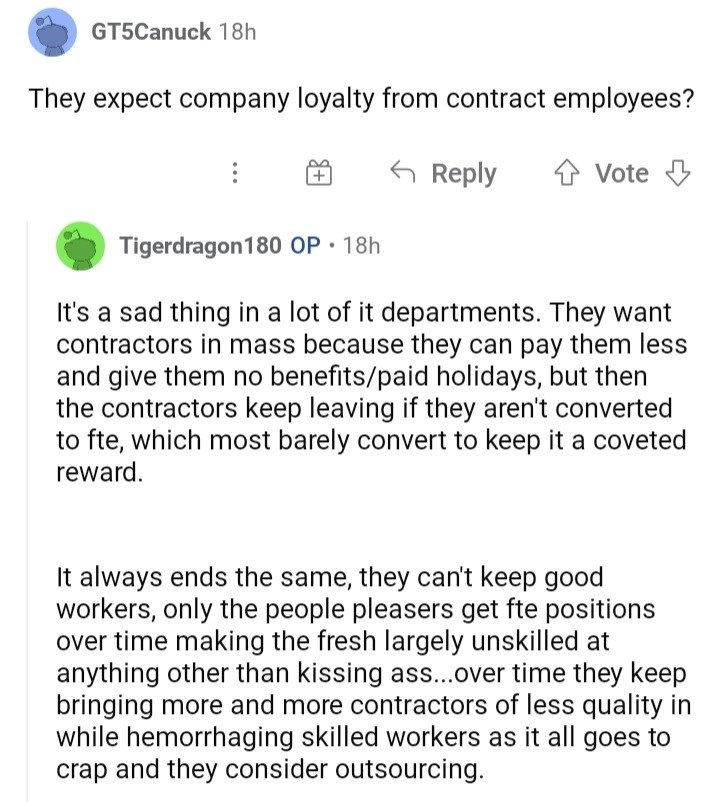 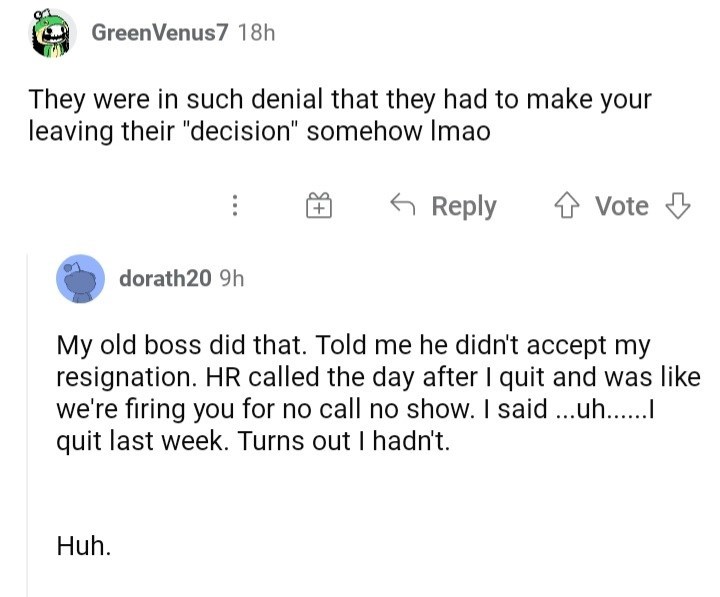 Do you think the employee did the right thing? Let us know in the comments below.