Some employers do not even think of their employees as humans.

How is quantity better than quality? Anybody who actually wants to grow their business knows that they have to build up their reputation so they can become a big name in the industry. And how do you build that reputation? By doing amazing work and making sure your customers are all satisfied. When your company goes big and you have a brand name, you can charge people whatever price you decide and because your work is so good, most people would be willing to pay it. Quantity might work for you in the short term when you pick a lot of projects and collect the money, but quality goes a long way. For long-term planning, make sure to check on your efficiency and quality, because that is what will matter in the end. A lot of employers do not understand that they can easily overwork their employees. They do not bother checking what their work capacity is, what the optimum level of work for an employee is, and just keep piling up work for them.

If you check the optimum level of work on which an employee works their best, you will be doing the company a favour. It will also give you a good work environment. However, some bosses just do not believe in happy employees. They believe in money. They want as much work done as possible and do not even care if they create a hostile work environment.

This photographer on Reddit decided to quit their job when their boss was overworking them. They would not accept the photographer’s resignation and just avoided the situation. The photographer decided to play them at their own game and won a lot. Scroll down below to read the whole story.

The photographer shared that this story happened 12 years ago. It was a fast-paced and high energy job, which was brutal for the photographer. 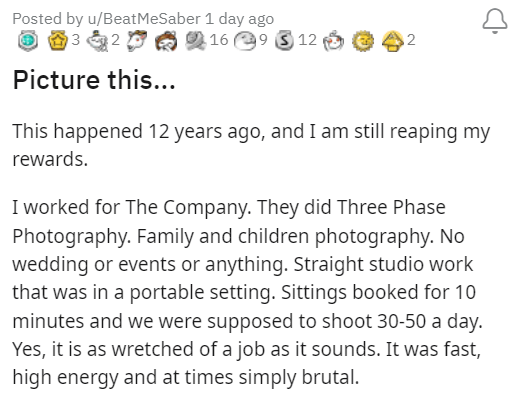 They explained how the process for shoots worked. The photographer was making a lot of profit for the company, but they were not being treated very nicely. 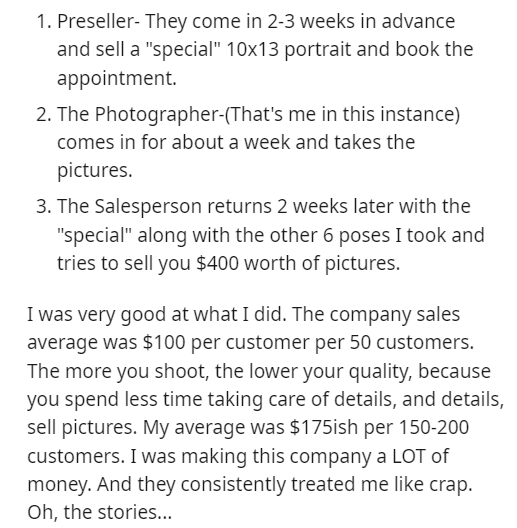 The company just wanted her to shoot as many sittings as possible, and the pre-seller would even book appointments out of the office time, which meant the photographer had to overwork themselves. 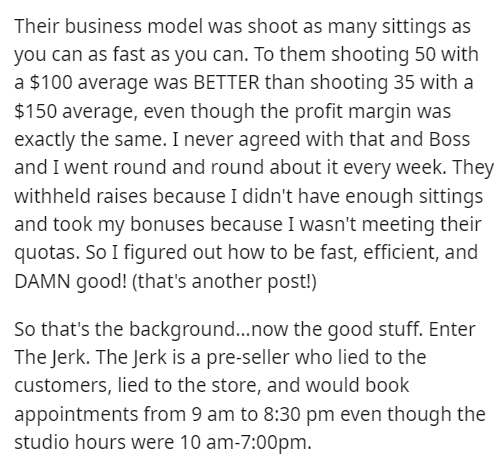 The photographer had a lot of problems with the pre-seller. They would put a lot of burden on the photographer, and sometimes it would affect her paycheck as well. 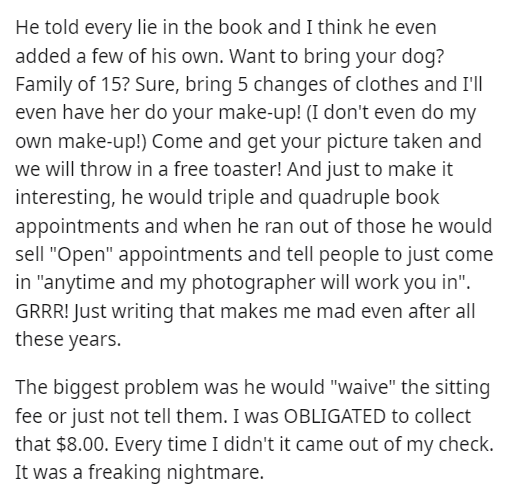 The photographer called her boss and refused to work with the pre-seller. However, the boss ignored it and the photographer had the worst week of her life before she quit. 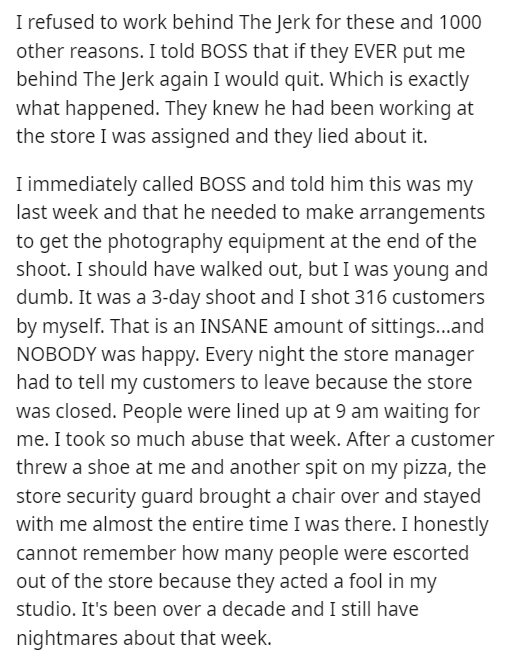 The boss refused to let the photographer quit, but it didn’t work that way. 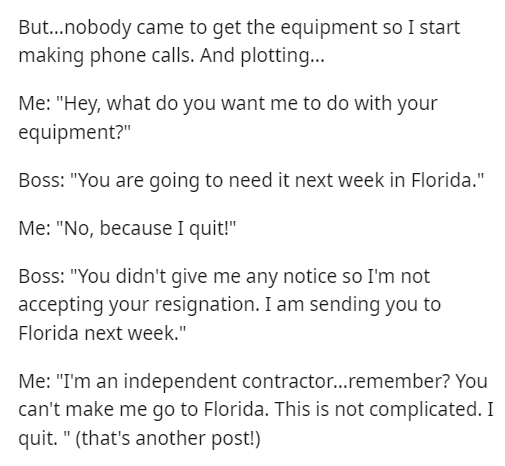 So the photographer decided to use her boss’ avoidance and procrastination against him. 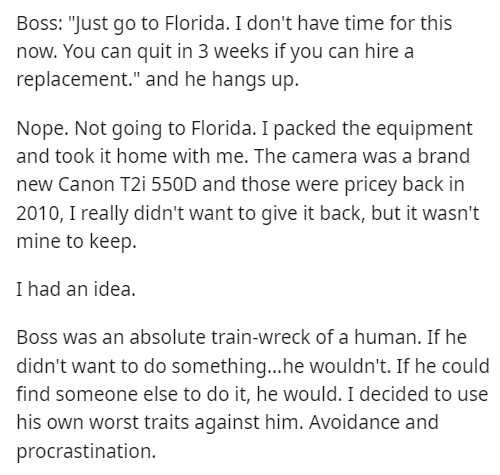 She took the company’s credit card and loaded all the equipment in a storage unit that was paid for by the credit card. 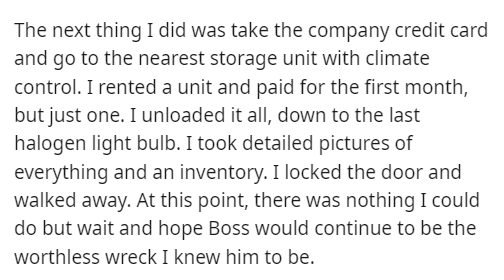 She reported the card as stolen and cut it in half. The photographer sent it to her boss with a note that said “I quit!” and sent the combination to the storage locker. 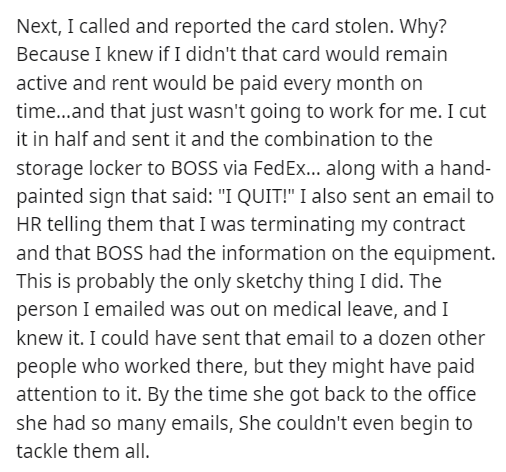 After a month, the police showed up at her door claiming that she stole the equipment. She made her way out of the situation by showing them receipts of the storage locker that was paid for by the company. 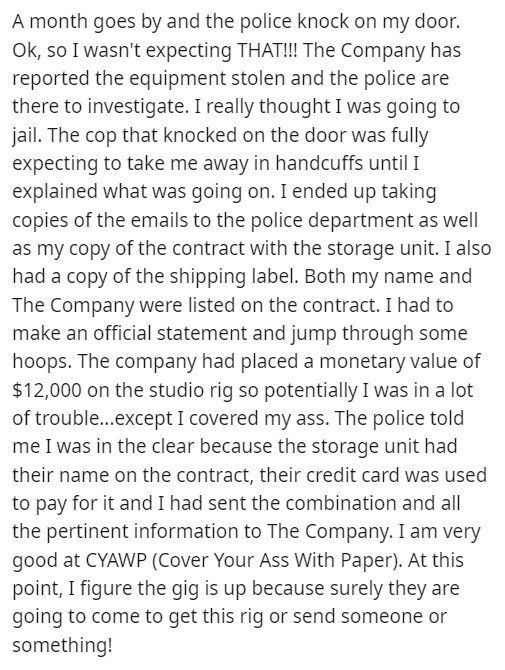 The storage facility called the photographer and warned her that they were going to cut the lock and auction the contents if she did not pay the rent. The photographer tried contacting her boss, but he ignored her. 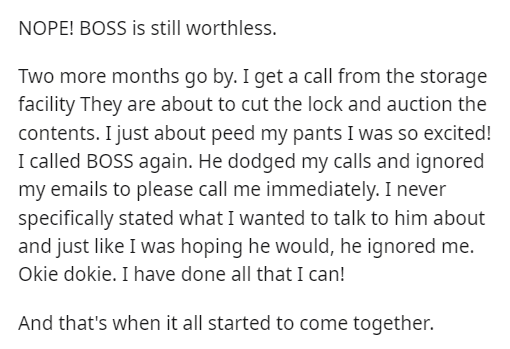 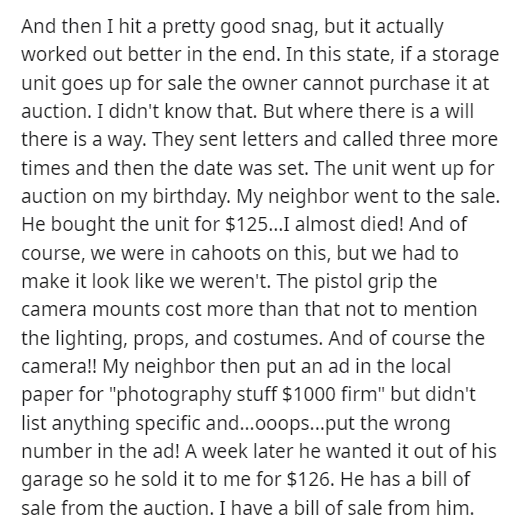 The photographer used the equipment and opened their own photography studio. It was quite a success. 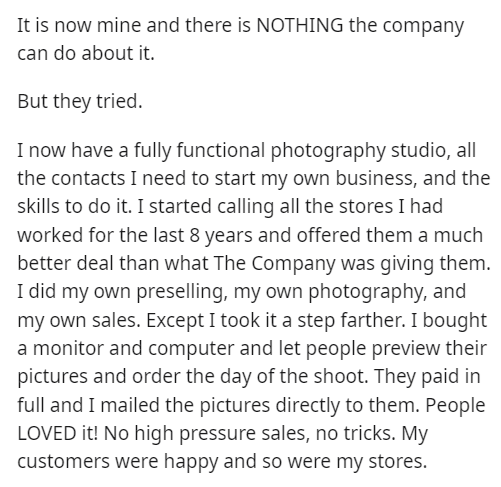 The photographer then received a letter from the company’s lawyer, but the photographer sent them all the evidence that proved that the equipment now legally belonged to her. Then they backed off. 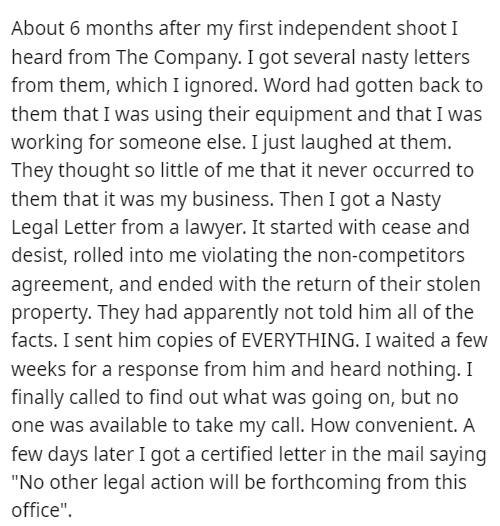 Her studio swept the entire market and she won all of her previous company’s clients over. 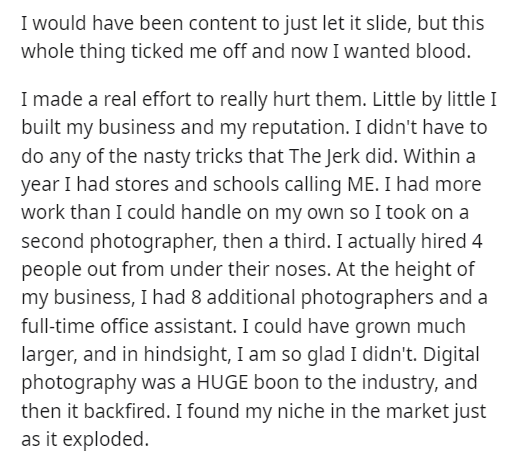 Her old company was slowly going out of business and the employees were also quitting, including the boss. 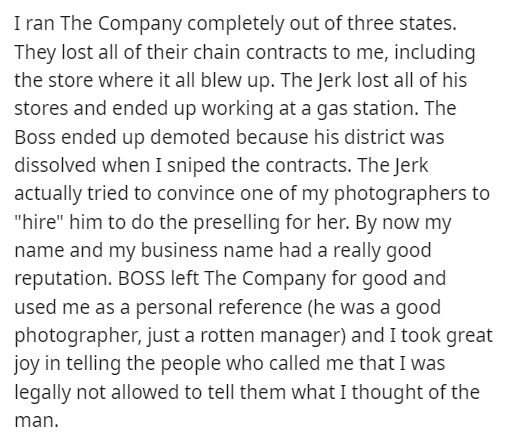 The photographer closed their business in 2017 but they still continue to work. 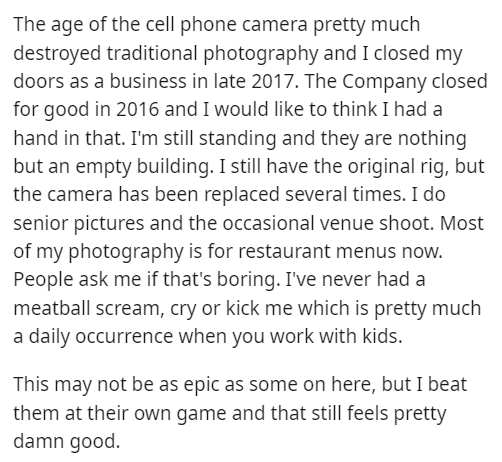 Do you think the photographer’s actions are justified or did she do the wrong thing? Share your opinions with us in the comments below.