I mean many of us have to work 6 days a week for years on end. So it is no surprise that many companies give vacation days and you can aggregate them for when you really need them, perhaps for when you have that trip to Hawai planned. However, this is not always true in every case. Some companies tend to enforce a policy that you have to use up all your vacation days within a certain time or you will automatically forfeit them.

That is what happened to ‘Gary’, a guy who worked in upper management and was a specialist in his field. Rather than making an exception for him when he had already made his plans known before the policy change, they decided against that. So as you can imagine, he was none too happy about that and did everything he could from talking to HR to directly contacting the boss. However, nothing worked so he did the only thing he could do at that point. Comply with the rules to the T.

This story is written but the daughter of the guy who is presented in this story.

Gary was a hardworking person and he wasn’t affected too badly in the oil crash either. 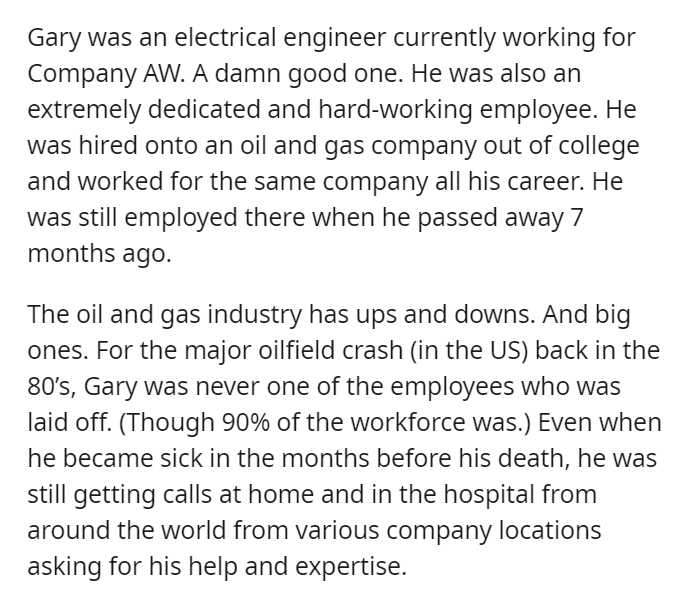 Then we go on to read more about what his company was doing at the time. 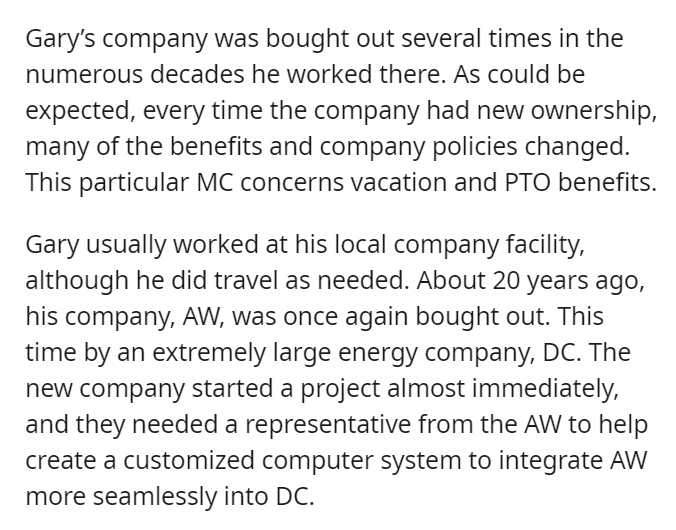 Gary was critical in this new project and was hands-on even though he had to drive for 4 hours to get there.

And while he could count the drive as work, he did not. 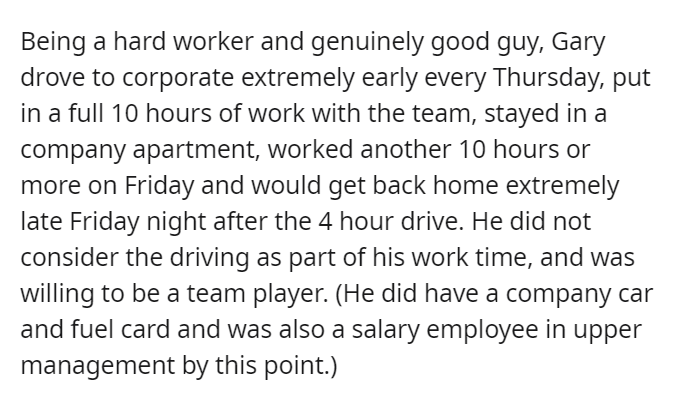 But then the new higher-ups changed the vacation days policy. 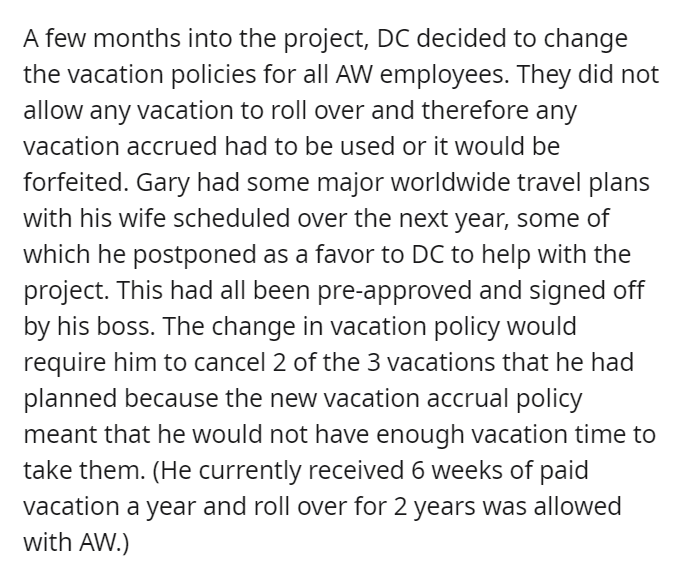 So he did everything he could but when nothing worked, he chose to comply with the set rules.

After all, this was legally all above board and no one could technically say anything. 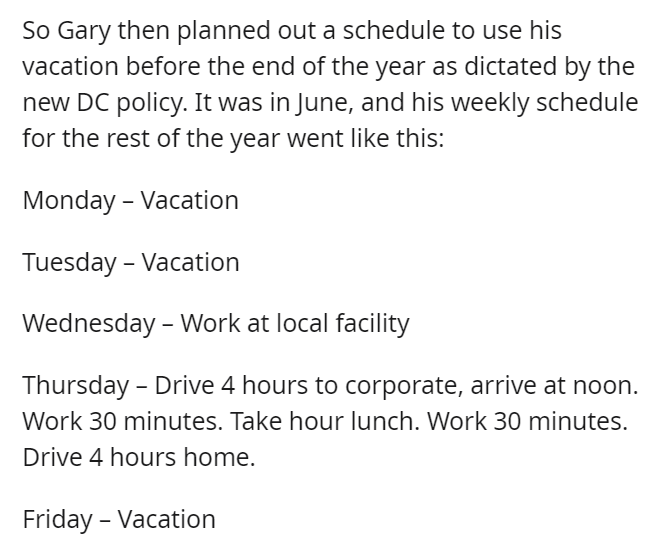 But this was costing the company a lot of money and projects were running late as well. 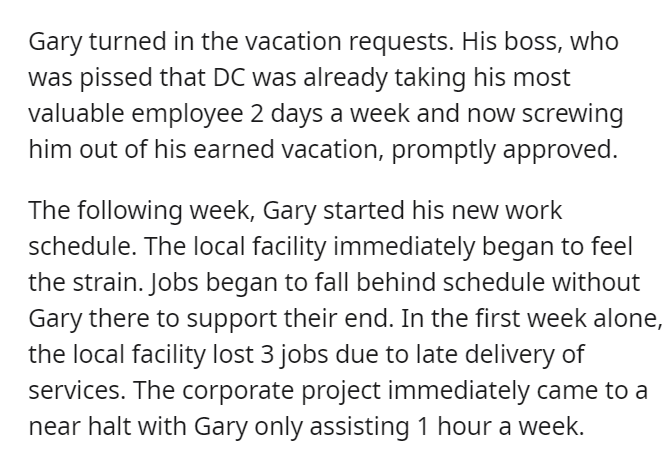 Unsurprisingly enough, they had to admit defeat as it would have cost them too much otherwise. 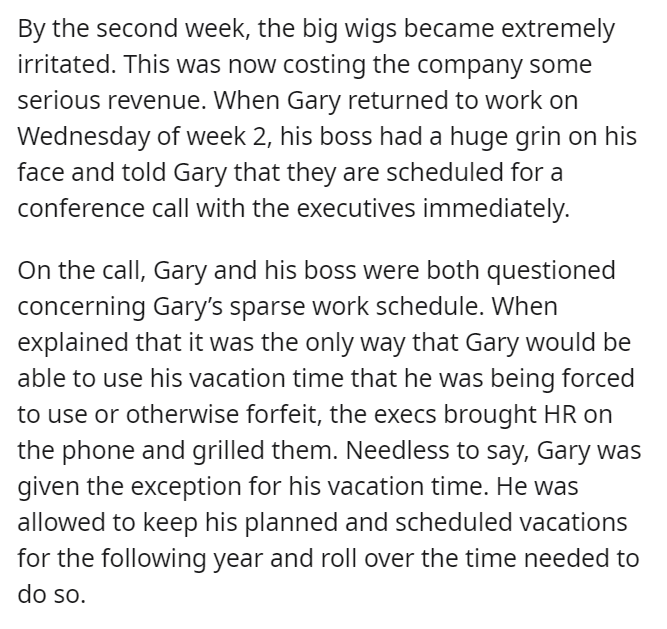 Basically, Gary got what he wanted at the end of the day. 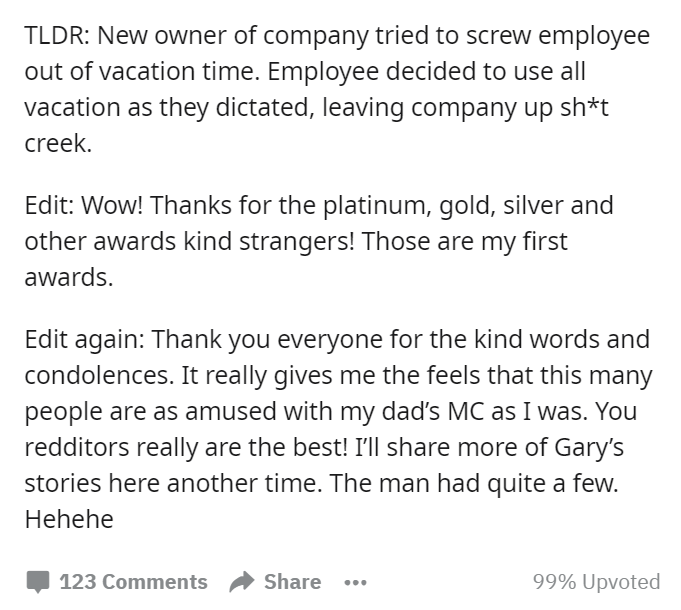 Apparently, a lot of people go through this and have different ways to get around this sort of thing. 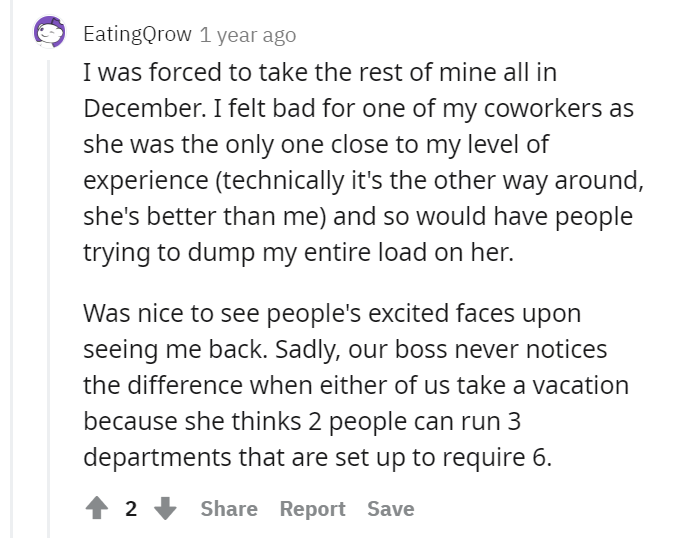 It is all about the money at the end of the day which is sort of understandable. 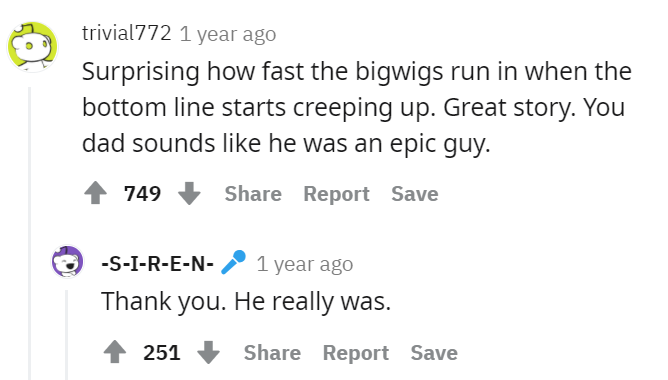 We worked in the testing and field support part of a company that was trialing for a huge contract. We put in all the hours required for a year. Shift, unpaid overtime, overnight, even working overseas. The only holiday I took was to move house, most of the team did not take any time off at all. But not to worry, that phase was due to end and we could all catch our breath and take our holidays.

The MD called a company-wide meeting where he congratulated us all on the successful completion of that phase. Our testing and support team was specially mentioned by him for our hard work and dedication to getting the job done. We were chuffed to bits. He then went on to do a bit of housekeeping and announced that we were approaching the end of the holiday year and we had better take them or we would lose them. “Absolutely NO exceptions”.

One of my colleagues stood up and started to walk out. The MD was a bit miffed someone was walking out during his meeting and asked what he was doing. He replied that he had more holiday accrued than days left in the holiday year, so by his calculations he was already 2 days into his holiday. Then he left. There was stunned silence for a minute whilst most of the rest of the team realized they were in the same situation and they also stood up and followed him out.

Requests for interviews with HR were ignored or rejected, so for the next month, the site was like a ghost town. Shortly afterward the MD retired. –captaincinders

But higher management should really be more careful when they decided to lay off ‘non-essential- staff. 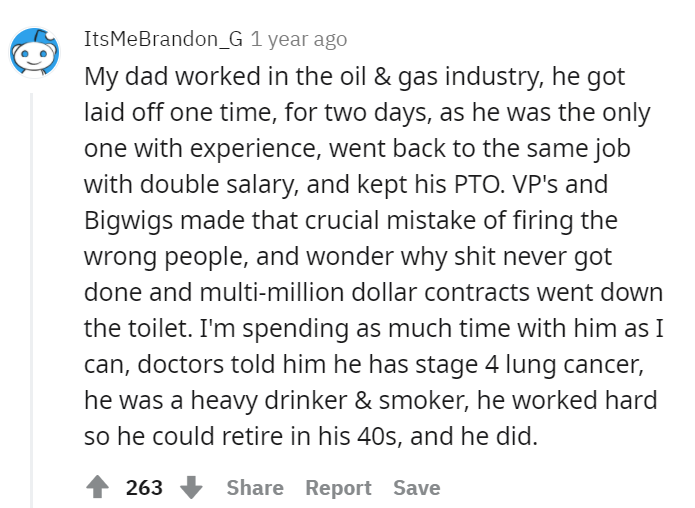 have you ever faced something similar? If so, what was your solution? Let us know in the comments below.