You never leave someone at the altar.

That is the worst thing you can do to someone. I mean can you imagine, what the person might feel if you ruin their hopes and dreams on the day that is supposed to be perfect? It can be very painful and yet so many people do this. Apparently getting ‘cold feet’ is an okay excuse when it comes to breaking someone’s heart.

However, this particular guy not only left his fiance on the altar but was also cheating on her for more than a year while she preparing for the wedding. All that hard work and money went right down the drain. So it is very understandable that she wanted to get back at him. But her grandmother convinced her otherwise.

The grandmother wanted her to get away and forget about revenge. However, it is not for the reason you are thinking.

And so the story of the century starts. 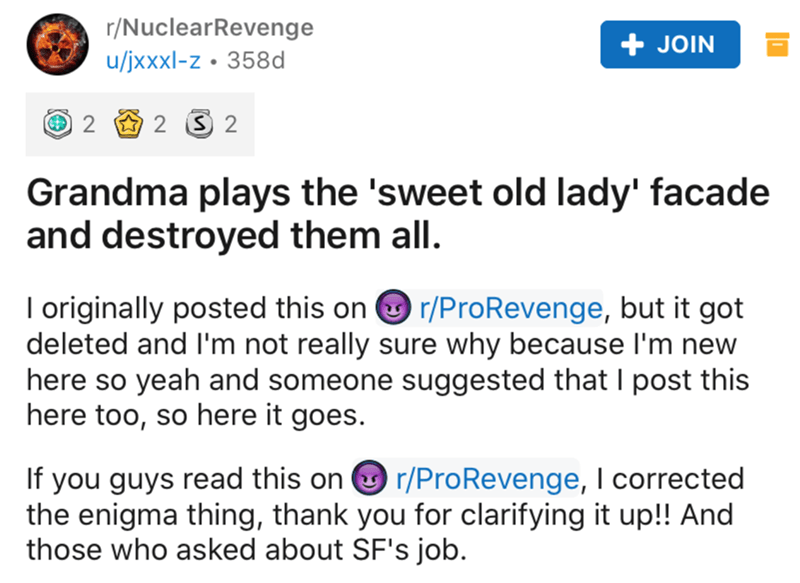 Someone explain to me how she is a golddigger when she earns more? 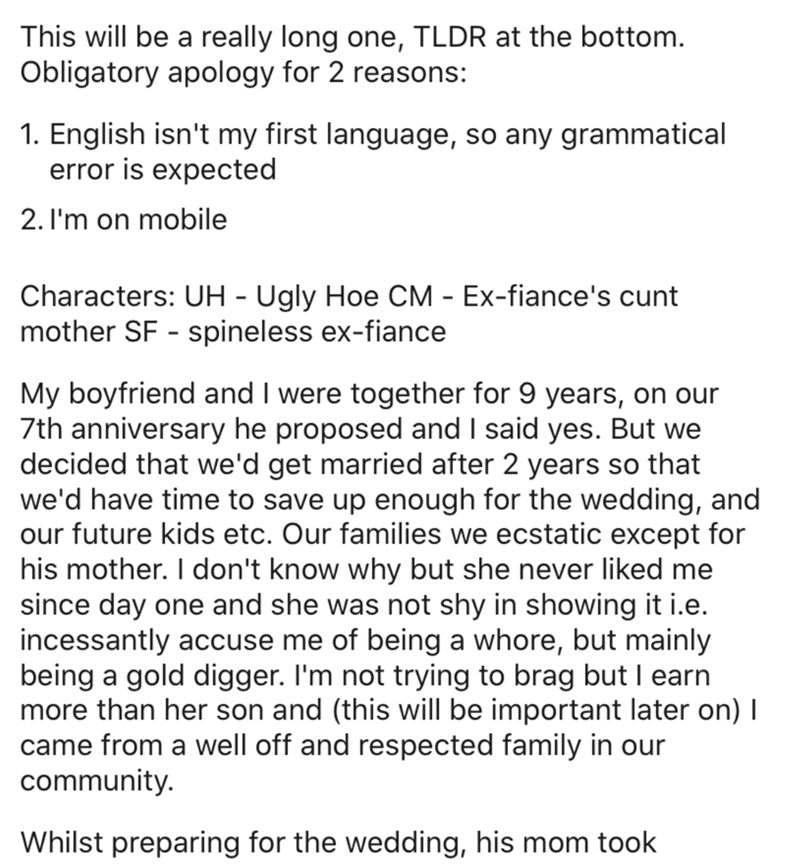 If this was me, I would have flipped my lid the moment she messed with my wedding. 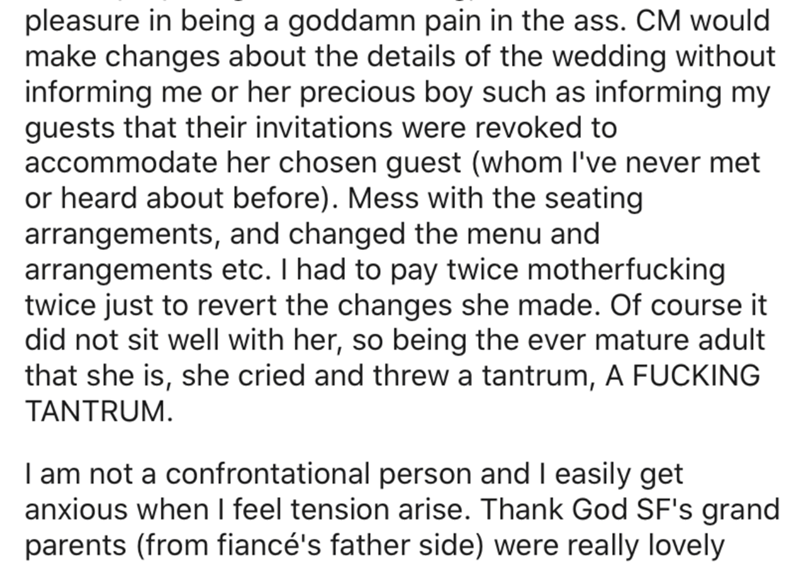 Not only was she acting like a bratty child but even went as far as stealing her wedding dress. 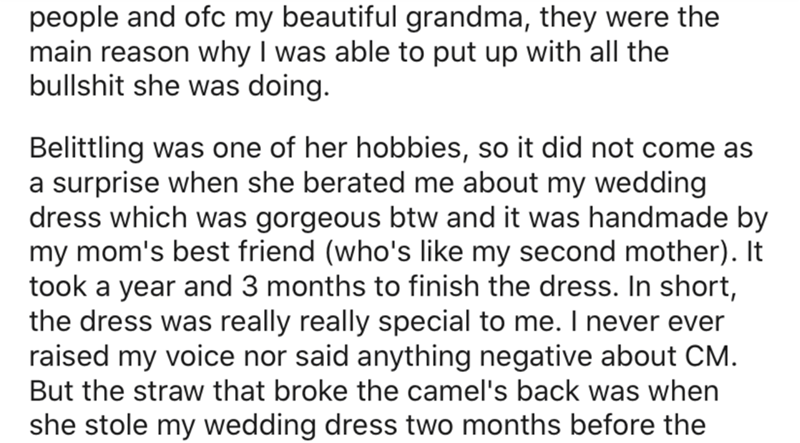 Because of her, the wedding went over-budget and on the day her fiance was nowhere to be seen.

For future reference, you can put passwords in place so that no one can change your decisions without your approval. For example, making your vegan event an all meat buffet. –anon931517

He had stood her up on one of the most important days a person can have. 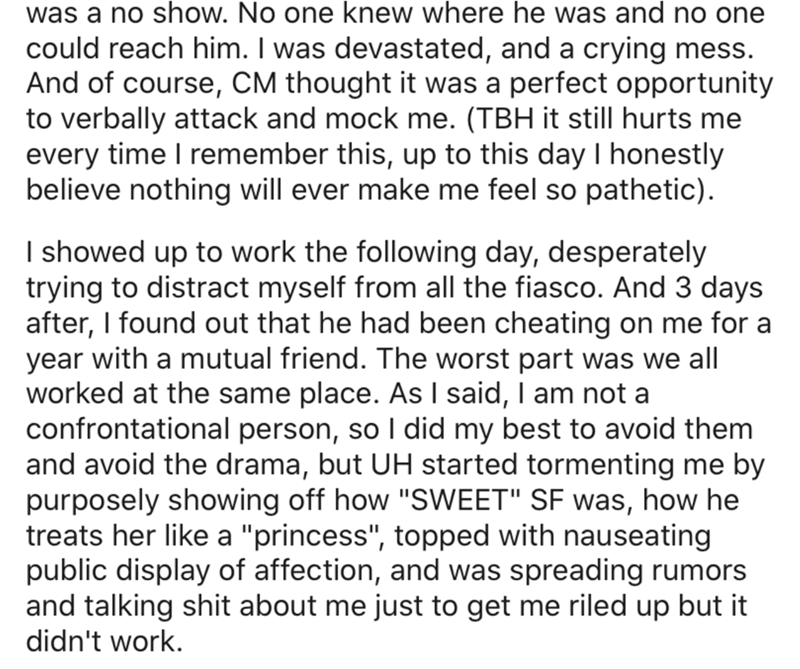 She tried her best to move on from this fiasco and forget her sh*tty ex-fiance. 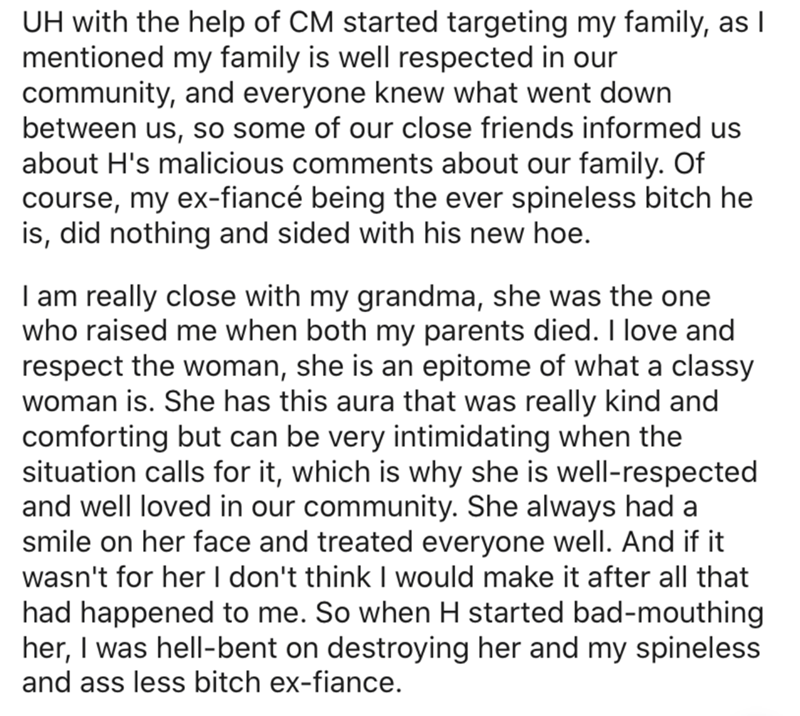 She wanted revenge but her grandmother wanted her to have a fresh start to she hesitatingly obliged. 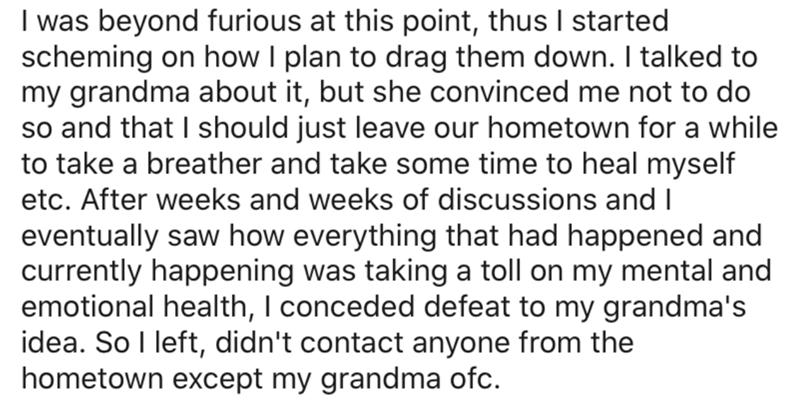 Time went by and she moved on from her past wounds and even went back for a reunion. 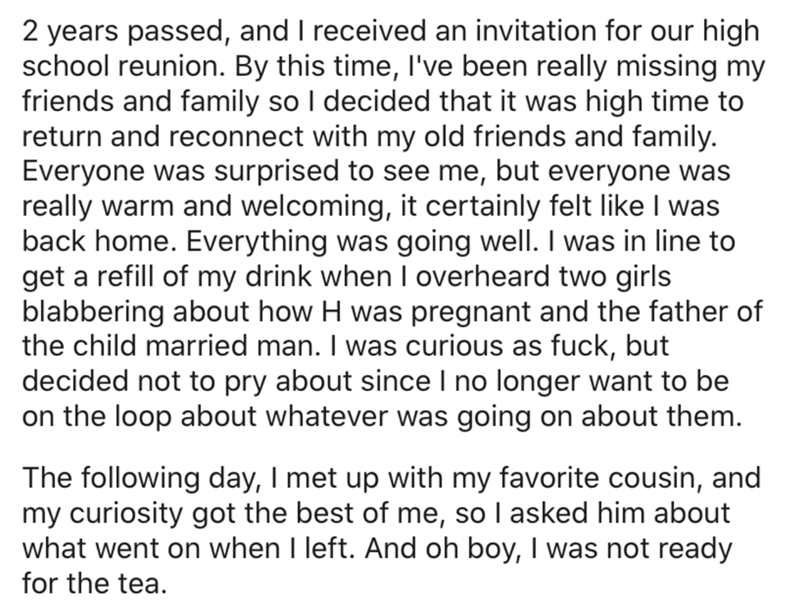 And that is when everything was revealed. 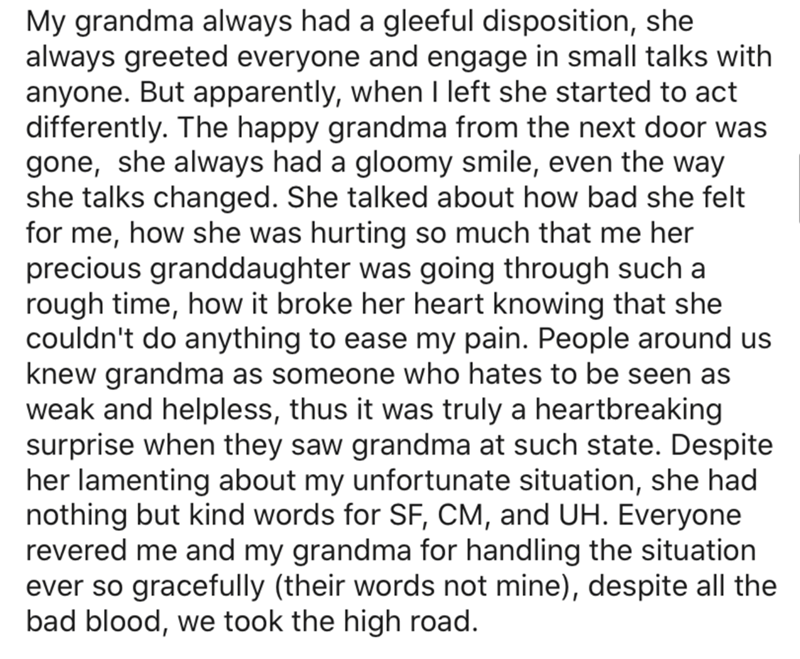 Apparently revenge was taken on her behalf without her even knowing anything about it. 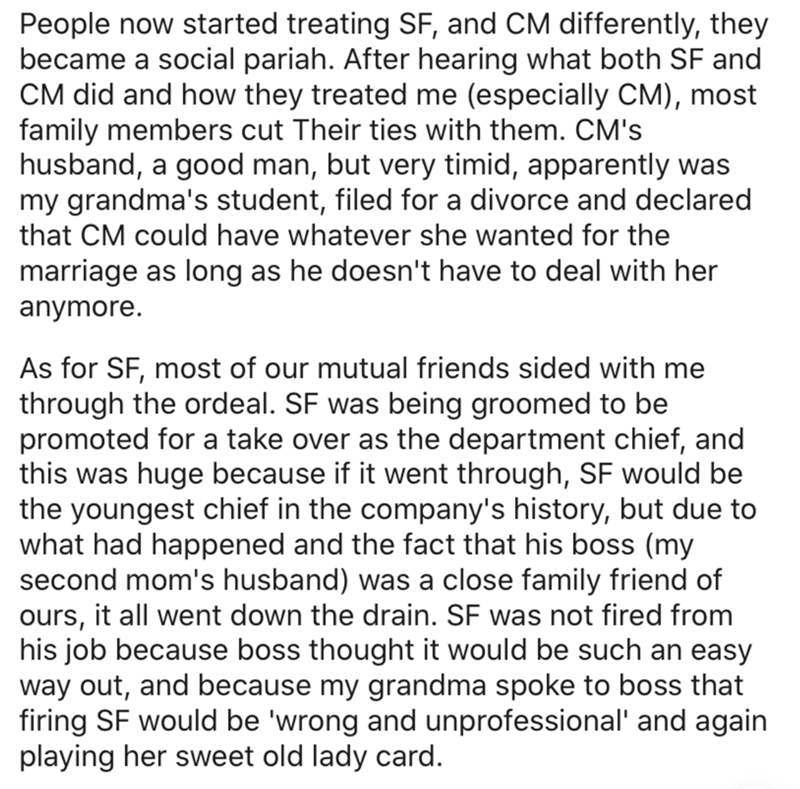 Safe to say the sweet old grandma ruined everyone’s lives one by one. 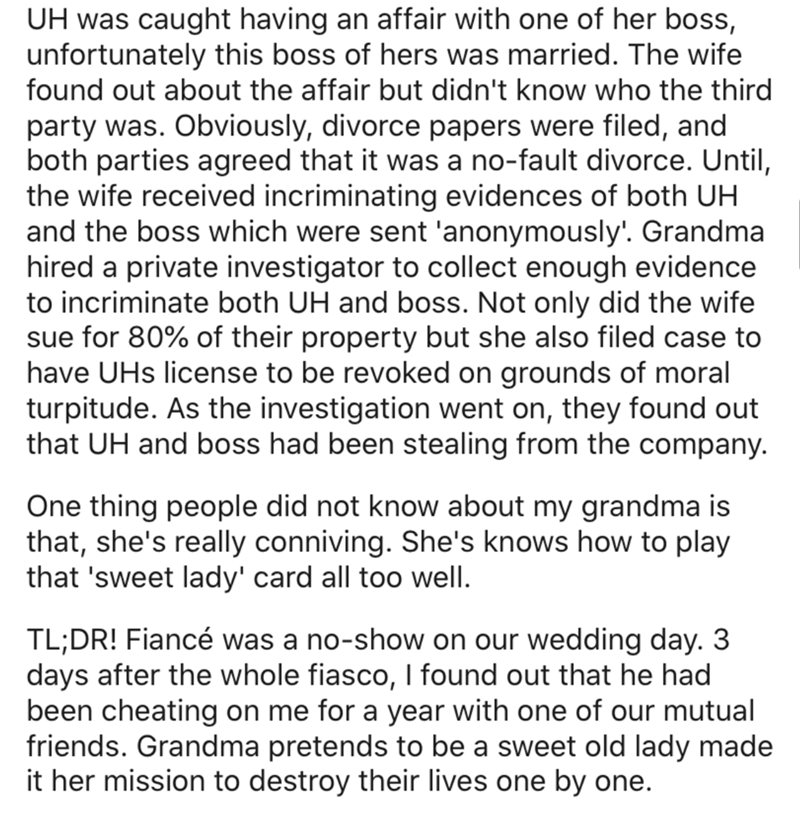 So Grandma brought about the destruction of CM’s marriage, destroyed the word and reputation of CM and SF resulting in their isolation from their respective peer groups, revealed that UH was having an affair and removed SF’s chances at the promotion he so desperately wanted.

That is absolutely nuclear revenge! –Forever-Sweet

To add the cherry on the cake, her grandma had done something just a ‘tiny’ bit more. 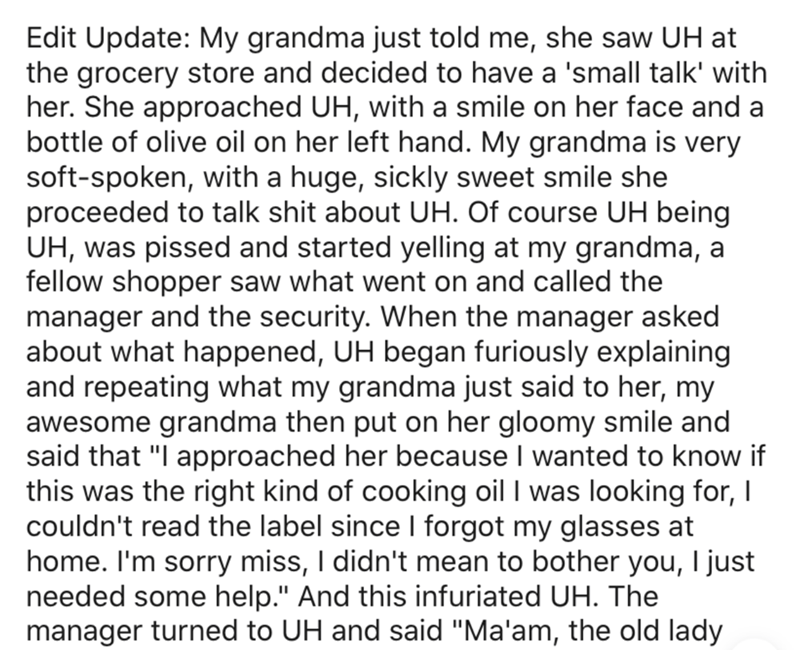 This is why you should never get on the bad side of a kind person. 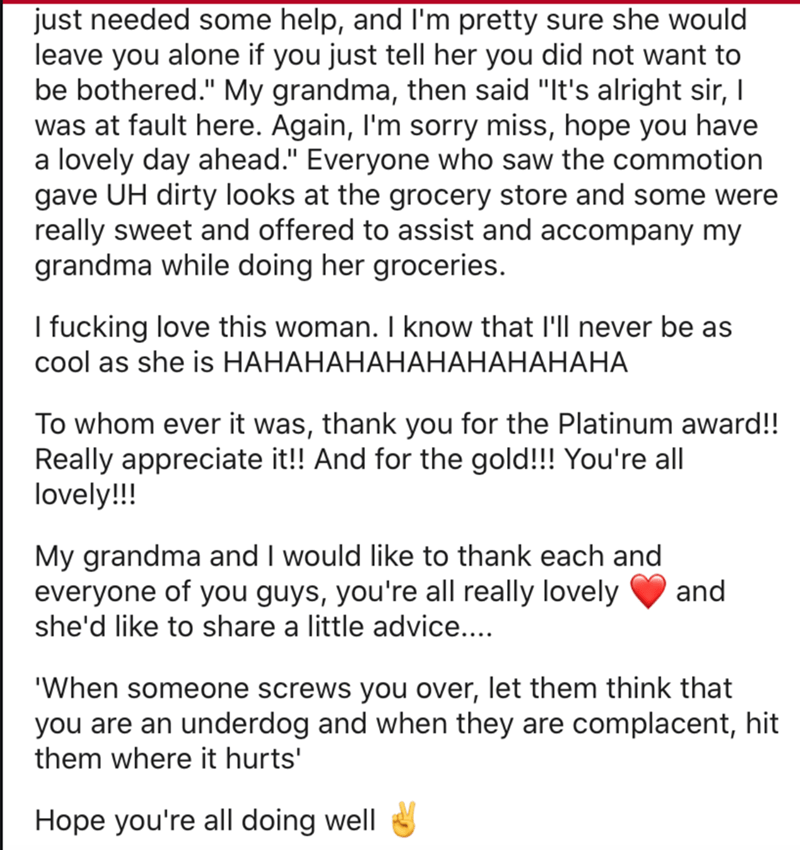 What do you think about the supernova revenge that this sweet old grandma took on the ones who had wronged her grandchild? Comment down below and let us know.