We would all like to say ‘Money doesn’t matter’.

But we all know that not to be true. And the only people who say that are rich and have all luxuries that many can’t even think of getting. Now I am not going to sit here and say that money can buy happiness because it can’t. However, people who don’t even have enough cash to pay their bills know that money problems can cause a lot of sleepless nights and insurmountable stress.

So yes, money does matters. And I can see how some may get annoyed if a person who is living comfortably says something like that. That is where this guy is coming from. While he has everything he needs now, he didn’t grow up with a silver spoon in his mouth, so he knows what it is like to be poor. So it is understandable why it irks him when his wife says these things. After all, she doesn’t really know, does she?

After all, every parent wants to provide the best of the best for their kids. 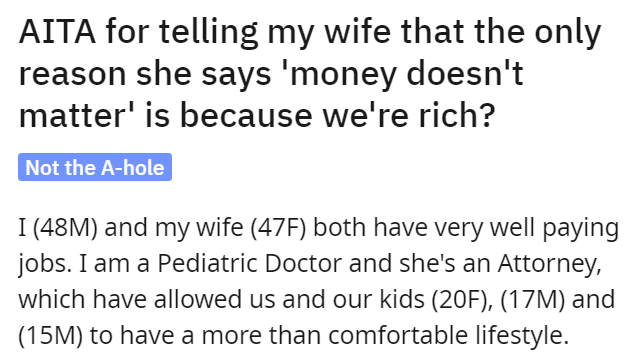 She isn’t completely wrong since they don’t matter in some sense of the way.

However, he was tired of it, so he let his issues out which didn’t go well with her. 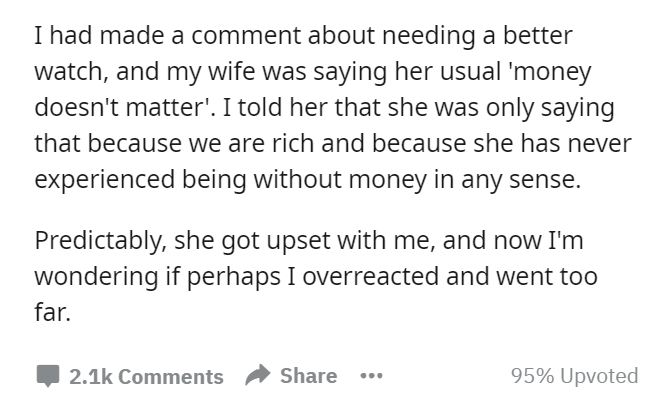 I might have overreacted and went too far, making things worse just because of a saying.

At the end of the day, it’s not their fault if they can’t understand what they haven’t been through. 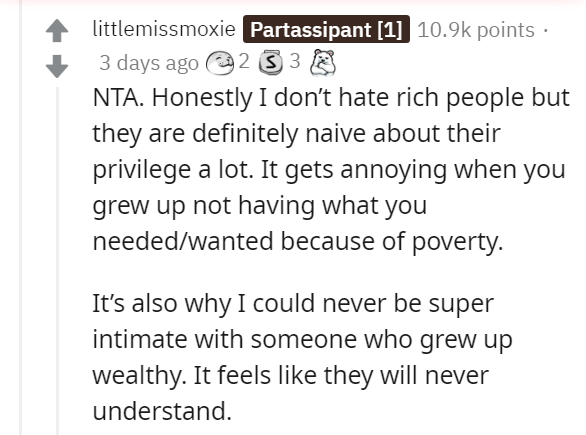 It can’t directly buy happiness, but it can help you with the things that do. 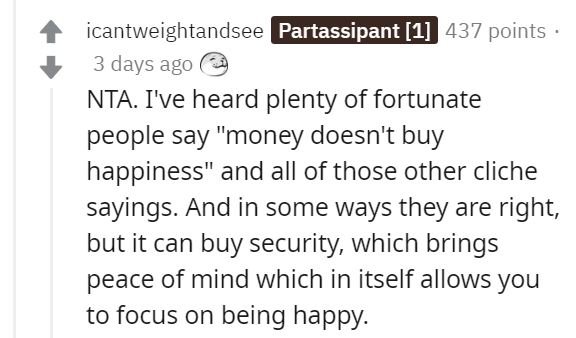 We honestly don’t have enough information to guess something like that. 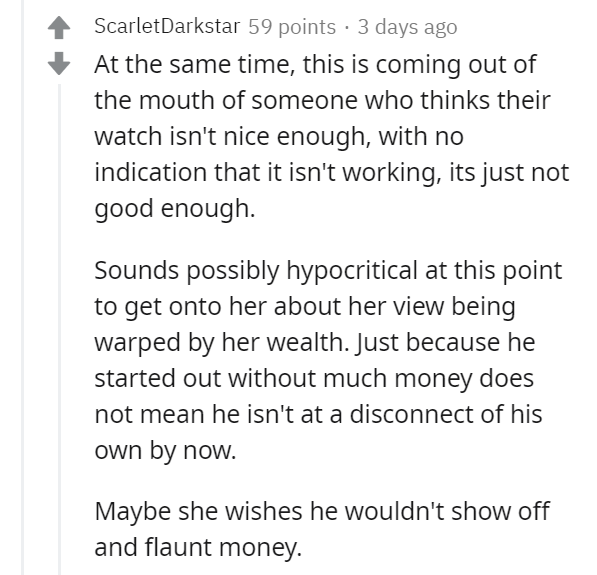 I wish you were wrong, I’ve been £10 away from my full overdraft for a week. I don’t want to, but all I can think about is money. How to pay for washing machine repairs. How to get more money to give my daughter a better life.

How to get a degree without bankrupting myself in the process, so I can make more money, so I don’t have to think about whether I can afford to buy a reduced price bottle of store brand detergent. –JaneDoeIsDying 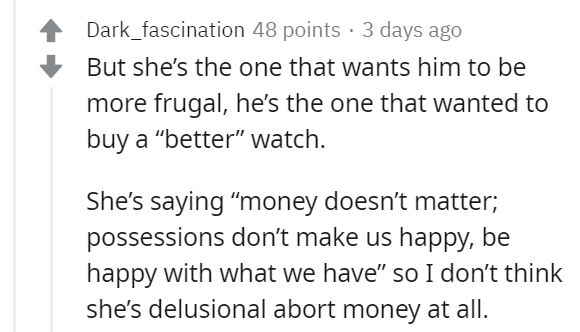 That might be what she meant in reality, but we can’t say for sure at this point. 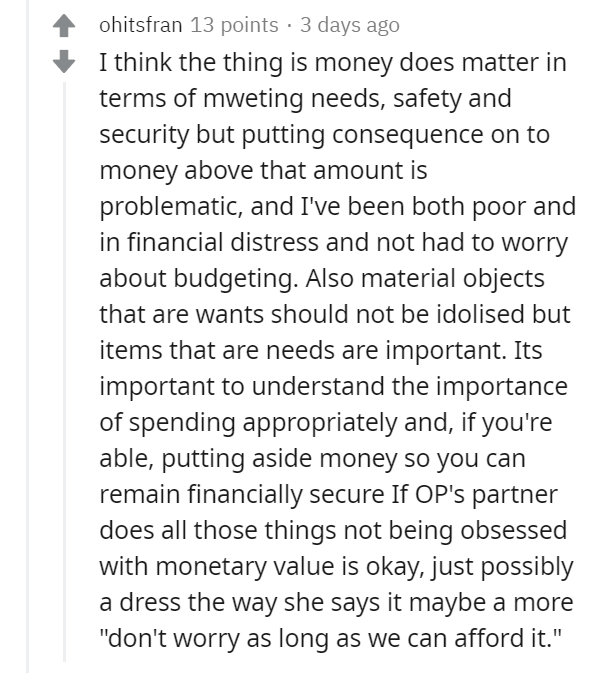 I can attest that this does happen. 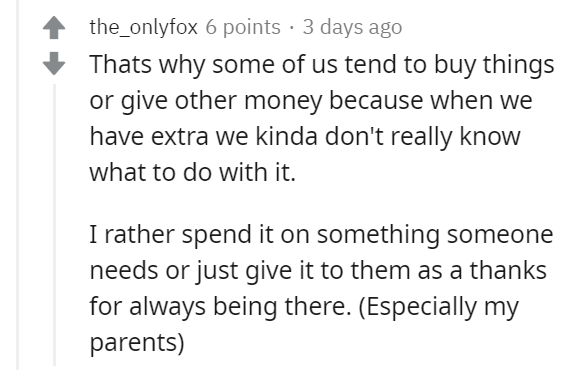 It is very easy to understand when you can’t even pay your fees. 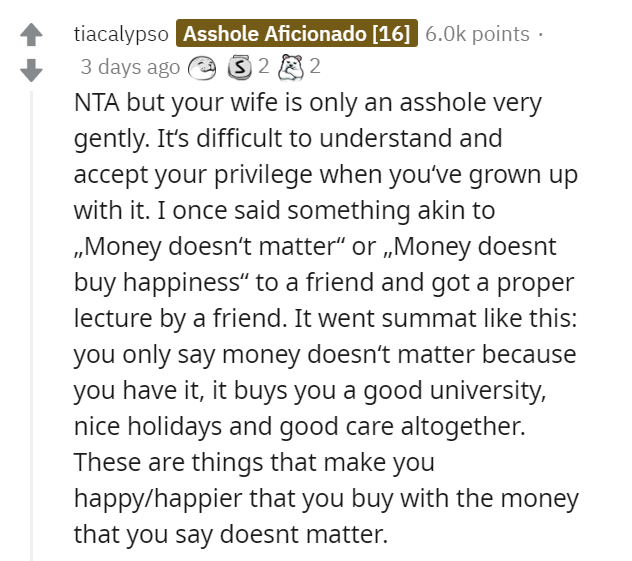 My family grew up very poor and in my early 20s, I was dating a girl who grew up in a pretty wealthy family. Not even rich, just, like, upper middle class. Money definitely wasn’t a huge issue for them.

And I will never forget when the transmission busted in my old Toyota Corolla, and she got mad at me for paying $800 to fix it, instead of just “buying a new car.”

People who have never experienced financial desperation and people who know what it’s like to have your gas disconnected for non-payment live in completely different realities. –Jovian8

There are people in the world who haven’t eaten in days. 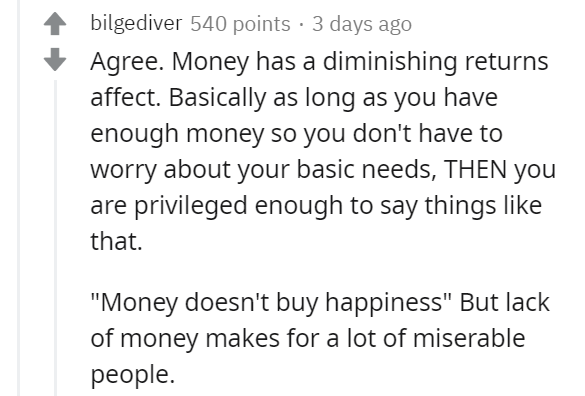 And yet in many countries, medicine for a flu will cost you an arm and a leg. 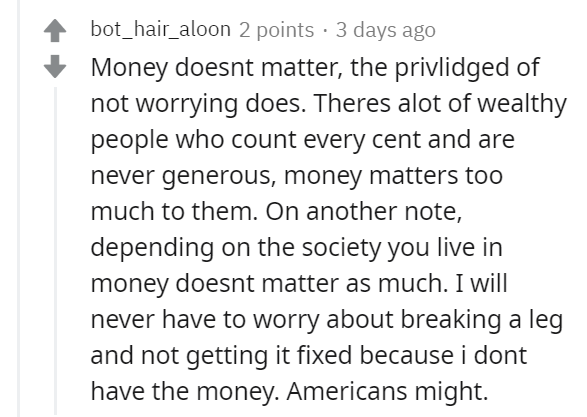 They just need to talk it out and communicate better. 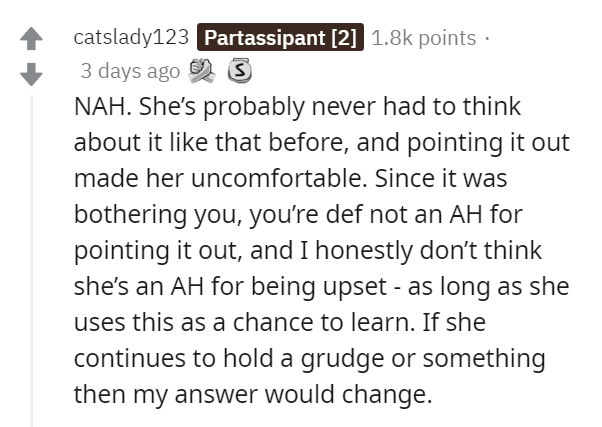 What do you think about the wife? Do you think she was being delusional or did she mean it in another way? And do you think the husband overreacted a bit? Comment down below and let us know.